on substitute teaching and time travel


So... I mentioned that I've done a little substitute teaching lately... Did I mention how much I love it?  I just told Ben that I want to become a professional substitute.  Maybe once they catch on to how amazing I am they'll double the pay and then that might be feasible.  But honestly I'd pretty much do it for free because it's that fun for me.  (And honestly they've already caught on to how amazing I am.)

My very first day could not have been more perfect.  I took a job at my own elementary school; I ended up being assigned to cover third, fourth, and fifth grades, in three blocks.  The way the schedules were arranged I ended up having six different classes, so I met a lot of kids that morning.  And I happen to really like kids, so I really liked them all.  Or most.  There was the one kid who spun his computer around until it came unplugged and insisted he typed better with his keyboard in a vertical position.  (Luckily I'm accustomed to dealing with technology shenanigans since I'm currently raising my second three year old.)

Some of the kids were pretty funny; this one fifth grader, a black boy who already had about a foot on me in height, was asking me, "Are you from the 90s?  Were the 90s cool?  What music did you listen to?  What did you watch on tv?"  After a good class conversation on those topics, I tried to get him to hone in on finishing his work and he said, "I just really like talking to you.  You seem like a really good and cool person."  Gee, thanks -- right back at ya!, I told him.

Just being in that school building again, for the first time in so many years-- it was like a time machine.  Ben and I read this weird novel a while back, Time and Again, actually I didn't even read the whole thing because I just found it so ridiculous and storyless... basically these people would go into an old building dressed in period clothing and just act old fashioned by smoking a pipe or eating gruel or whatever and somehow they would travel back in time for real.  I don't know, like I said I didn't even read the whole book, but the point is, I almost want to check it out from the library again because that's almost like what I experienced.  Dudes, I traveled back in time.

I touched the worn wooden doors to the wardrobes where I hung my coat and backpack every single day.  I hadn't thought about those coat hanging areas probably since I left fifth grade and moved on to the much more sophisticated world of lockers.  And standing there in the same spot some twenty years later, a flood of moments rushed my mind; I was my eight year old self again.

I went through the backstage door at the top of a wheelchair ramp which used to be a set of steps and out onto the stage and looked out over the empty gymnasium and I was transported -- to my kindergarten play, my fifth grade play, the roller skating dances, basketball gym class.  The time travel sensation was so real it took my breath away.

Oh, and to cap off the first day: there were boxes of withdrawn library books in the computer lab and I scored some serious gems, including Encyclopedia Brown #6, a book I most definitely borrowed myself back in the day.  There are still cards in the books -- the public library has done away with them and I had all but forgotten how we used to write our names in the spaces and give them to the librarian to file away after she'd stamped the card pocket with the book's due date.

My next day was with sixth graders at my old middle school.  I traveled the hallways a little; I went up the brick-lined stairwell to my class.   Before I left I went into the auditorium and onto the stage and played a little ditty on the marimba.  I felt almost like I would time travel again, but the conditions we're quite right.  I think I realize now that it's not enough to survey a room; transcending time requires you to stand in just the right spot, your conscious halfway between the present moment and a daydream.

One day I covered for first grade where my niece goes to school and got to have lunch and recess with her.  That was the day a first grader complimented my hairstyle and I realized, This six year old is the only person who has ever complimented my hairstyle.  I think I belong here.  Another day I did elementary school music where I sang songs and played the recorder, and during my "lunch" I had a solo jam on the xylophone.  I was so awesome that they keep calling to try to get me back.

My most recent gig was as middle school gym coach, in my old stomping grounds at Reid.  Down the steps, into the locker room-- I was time traveling again, to those awkward days of training bras and first periods and changing clothes for gym.  And then I got to spend the day playing badminton with seventh and eighth graders.  Seriously, what could be more fun than that?  How could you possibly beat making a living playing middle school PE class badminton?  It was so fun, I was genuinely disappointed that Ben got called into work and I couldn't go back the next day.  I was so ready to take some more kids down on the court.

But honestly, as much fun as I had, I love being home with my own kiddos even more.  Today (day before yesterday now because that's how it goes with getting things finished around here) was like the first day of spring (despite the foot of snow still covering the ground!)  Ben was off working so I was home, and we were out walking and riding and playing in puddles and it was good to be in the sun!  I made a periscope with Bob; I had a dance party in the kitchen with Owen; I snuggled my baby to sleep for her nap.  I gave them all a bath after they got good and muddy.  I read poetry by A.A. Milne aloud to the boys.  I kissed hurt spots and hugged away sad feelings.  I encouraged my littles to work out their disagreements together.  I took deep breaths when my patience was tested.  I tenderly changed dirty diapers and underwear.  I've totally loved my teaching experience, but home is definitely where I feel most needed these days, and I am totally happy with that.

Now for some photos from our first two days of spring, which were wet and muddy for sure.  At first Maisy was content in my arms and in the stroller, but then she was doing the dive and crawling off the picnic blanket (first picnic of the year!)... I ended up putting her in an old snow suit of the boys' so that she too could get down in the mud.  This girl is going to have quite a summer trying to keep up with her brothers! 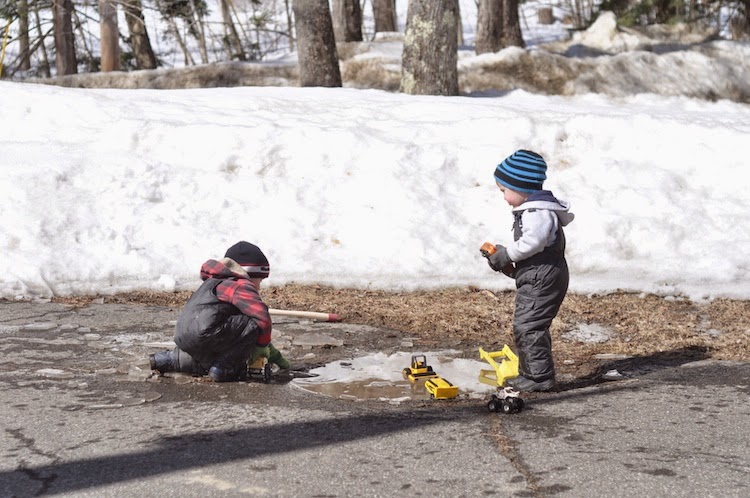 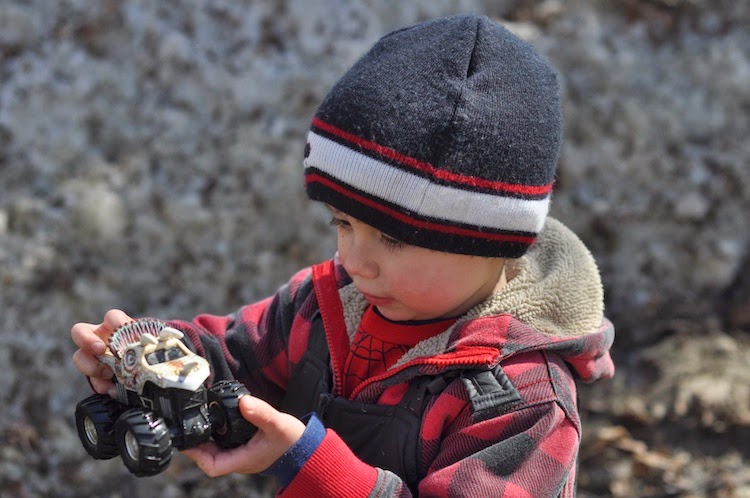 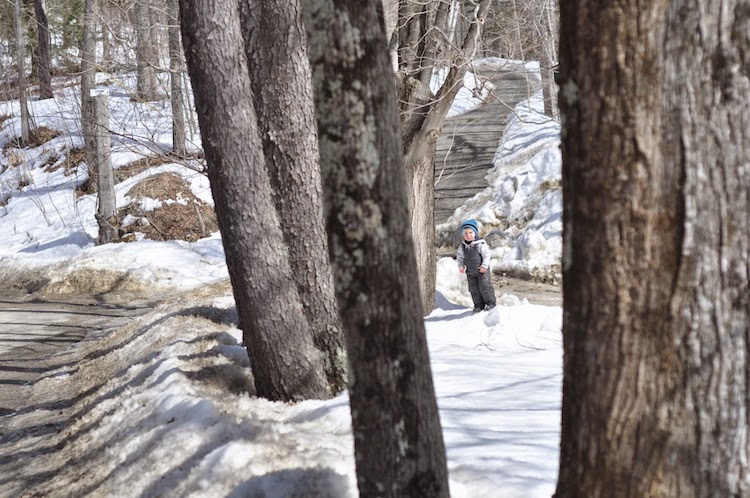 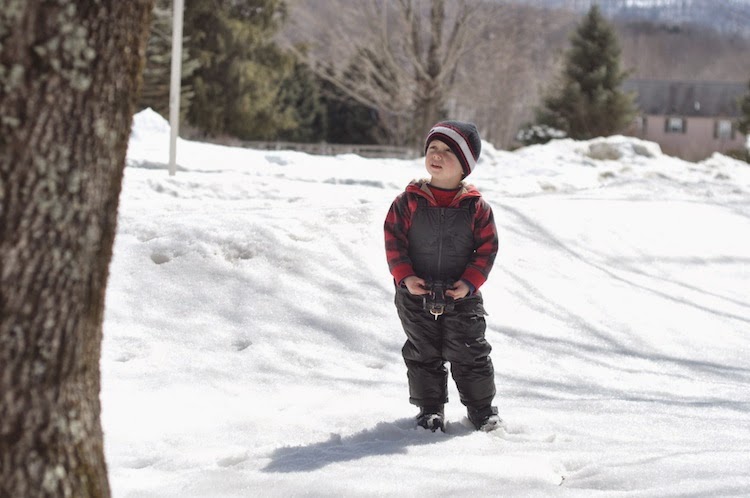 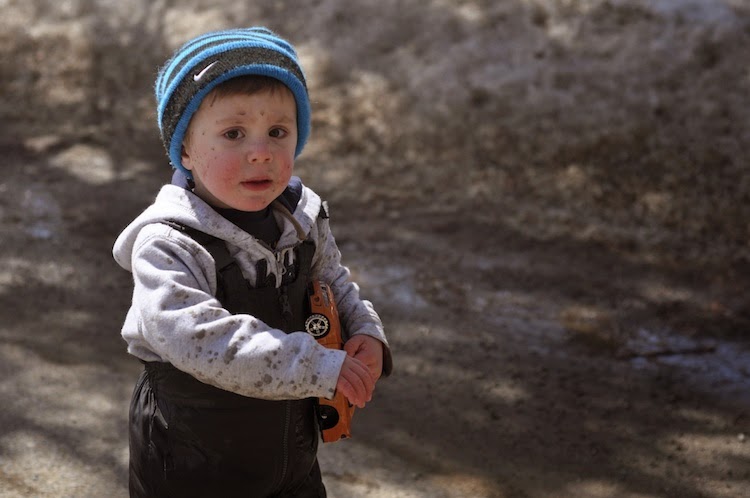 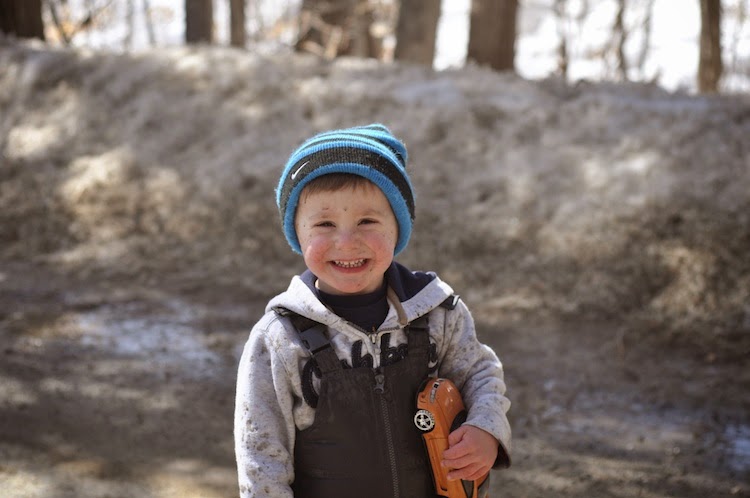 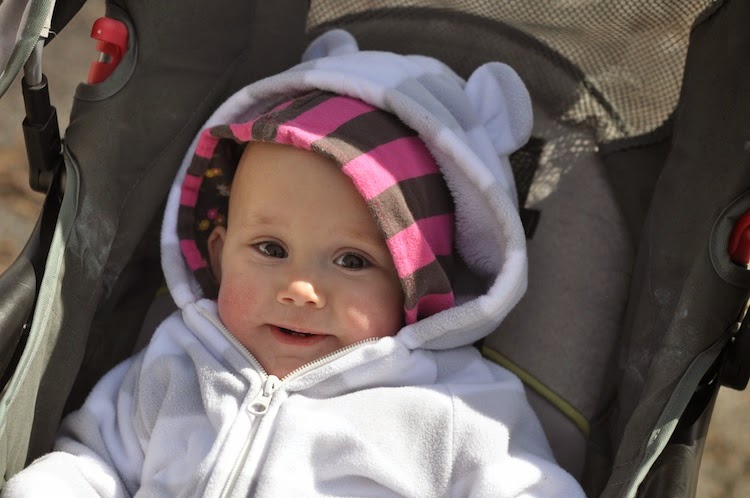 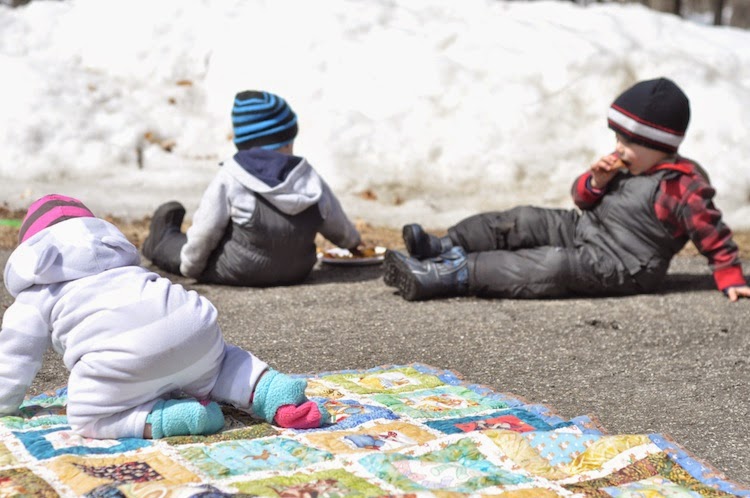 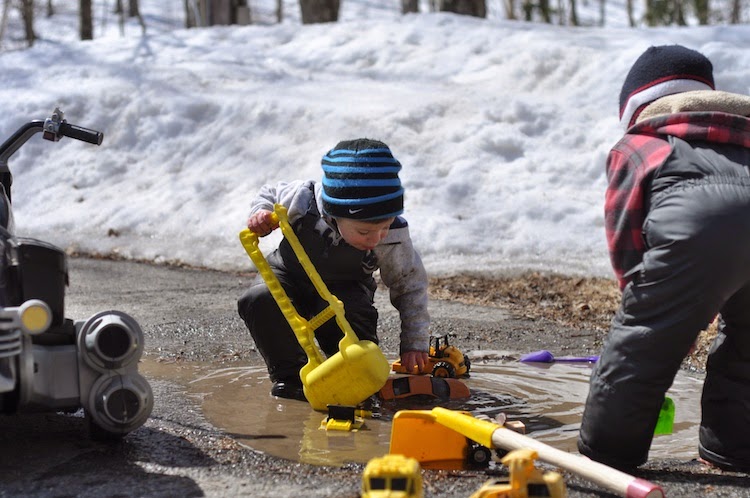 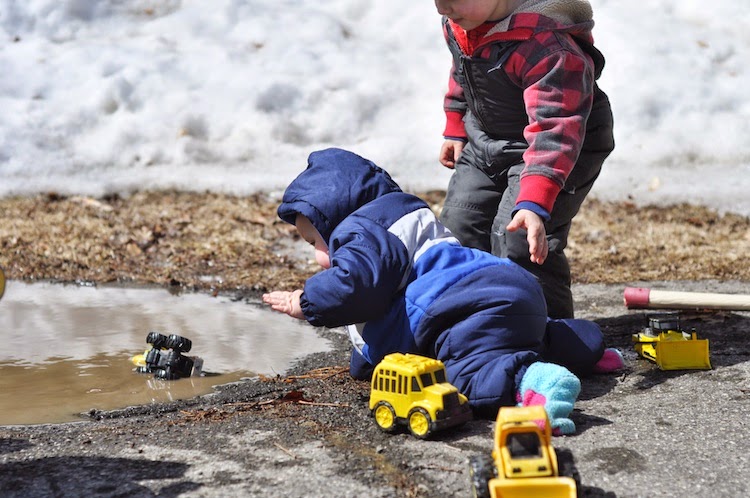 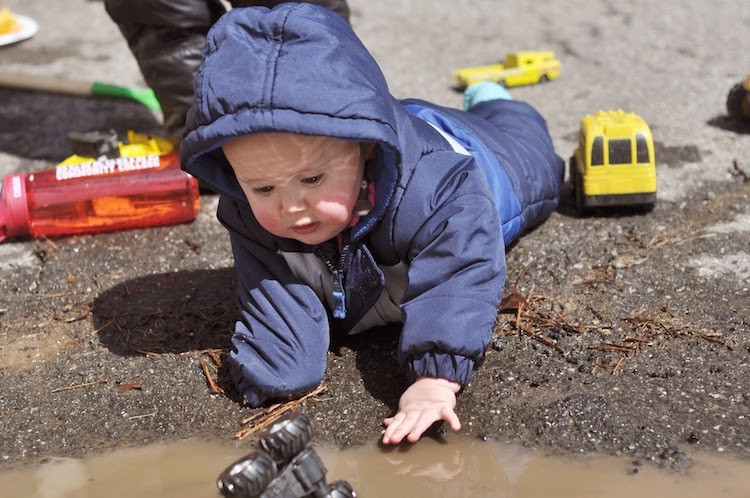 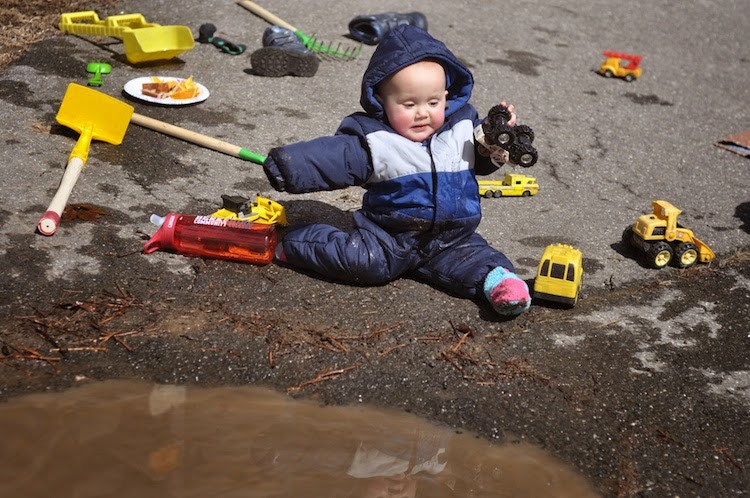 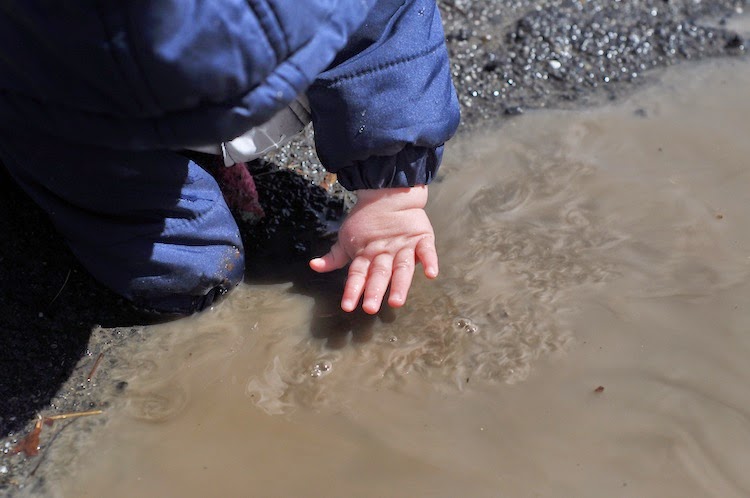 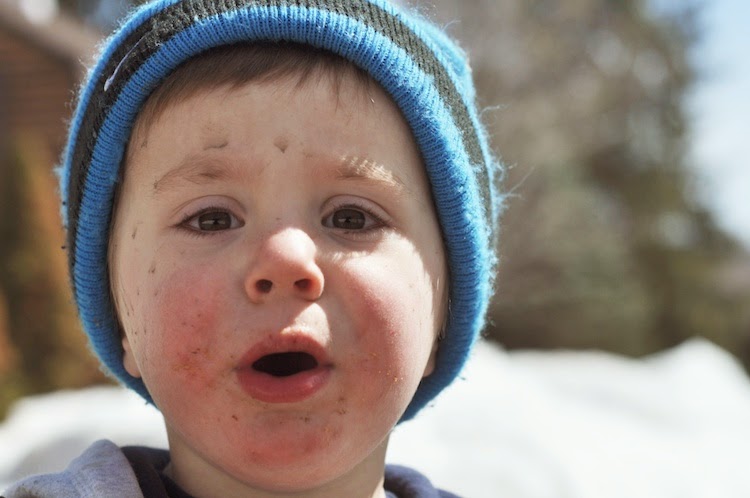 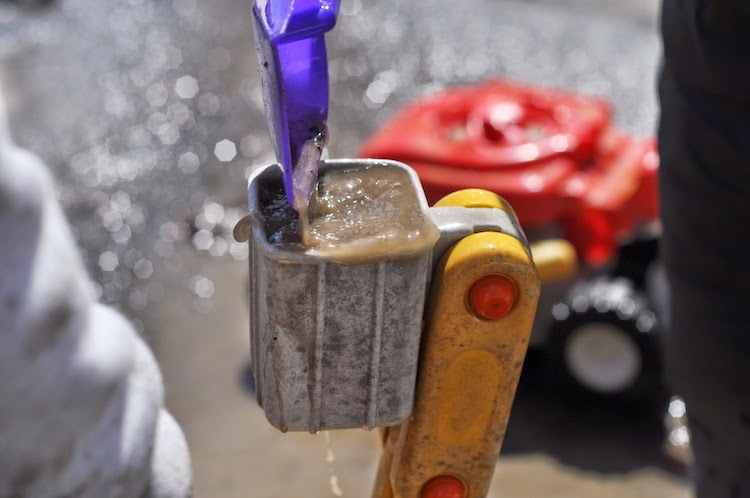 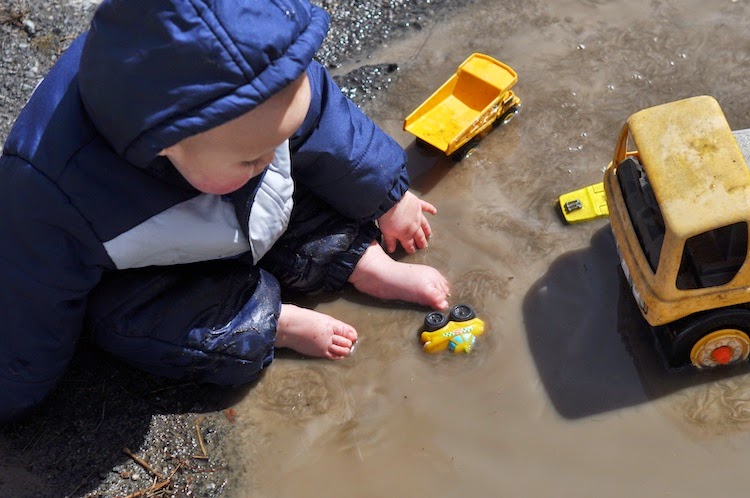 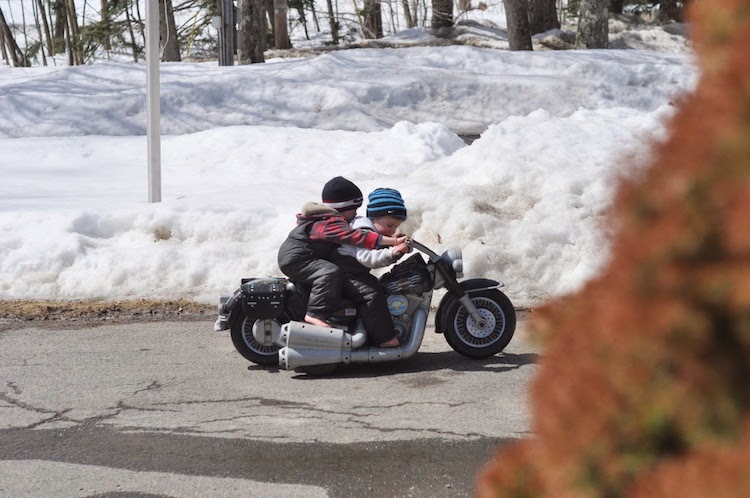 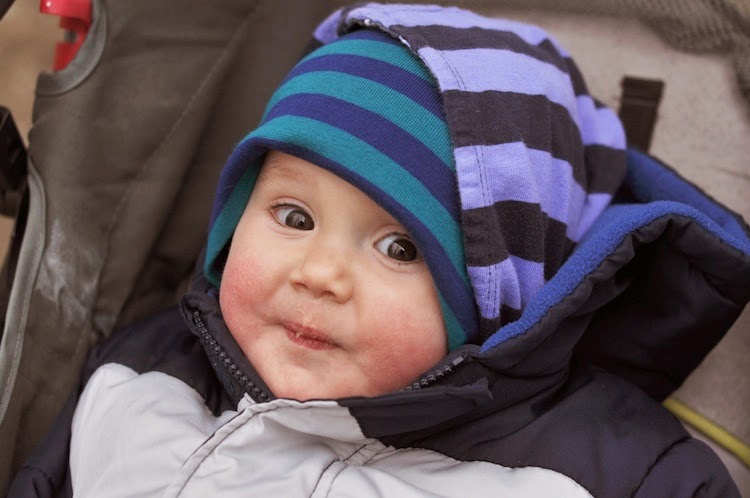 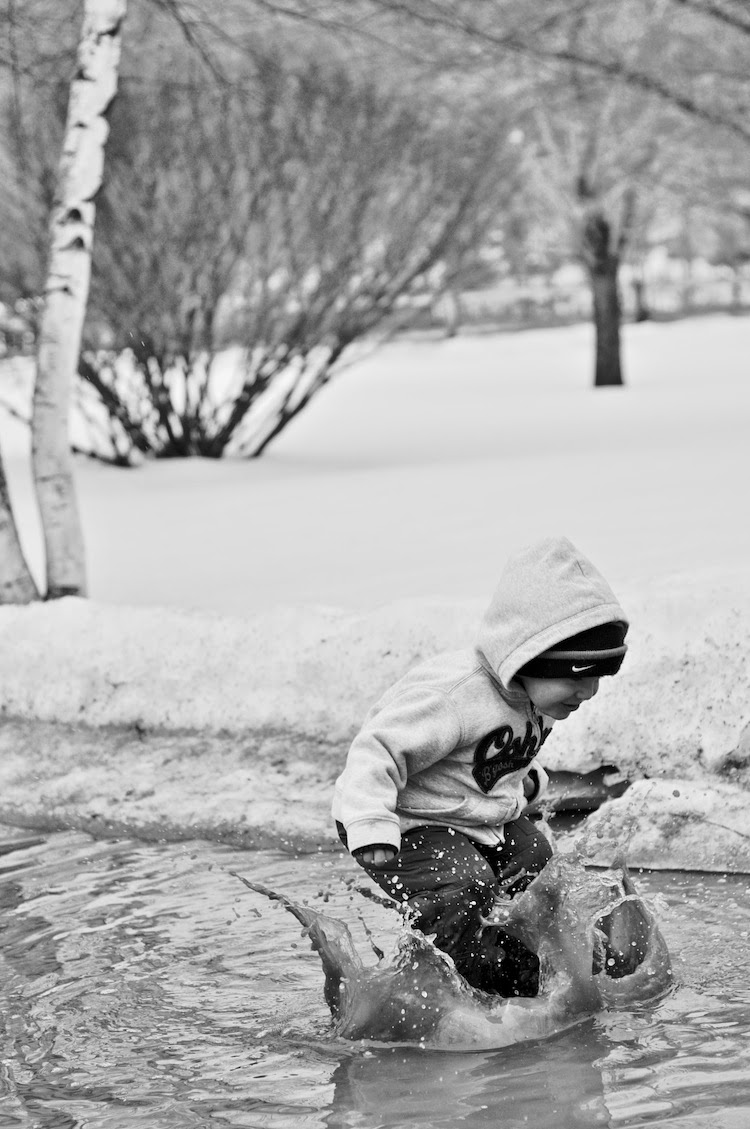 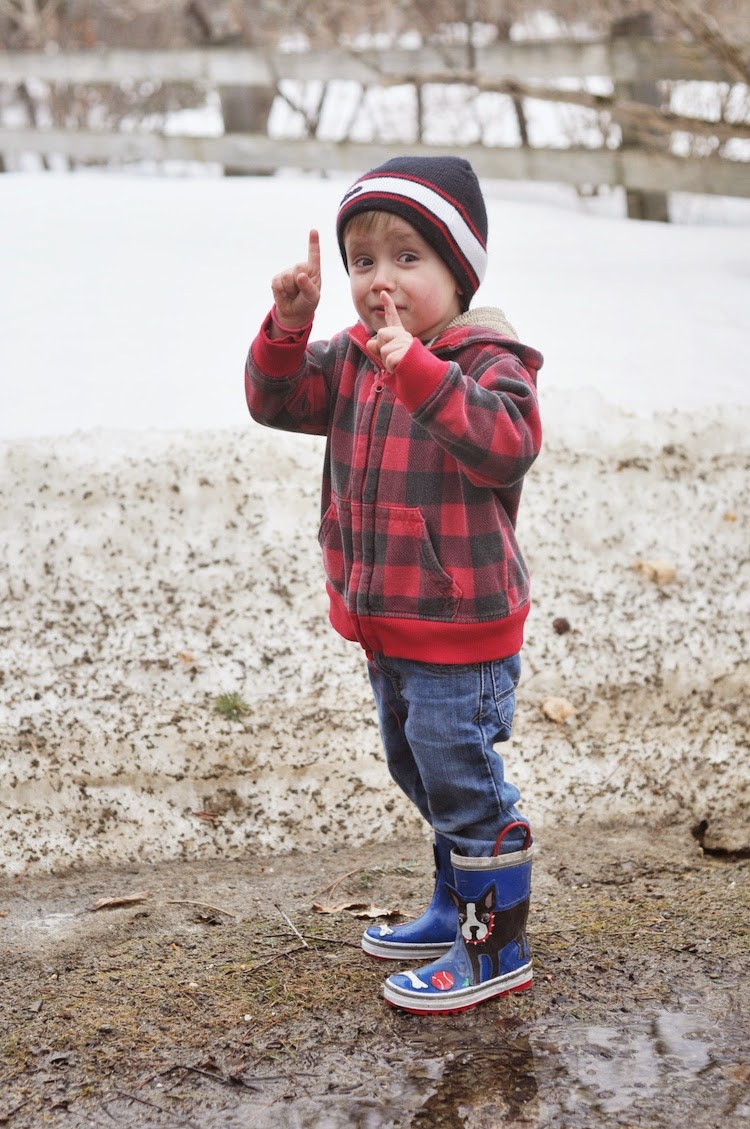 Email ThisBlogThis!Share to TwitterShare to FacebookShare to Pinterest
Labels: friends, looking back, photos