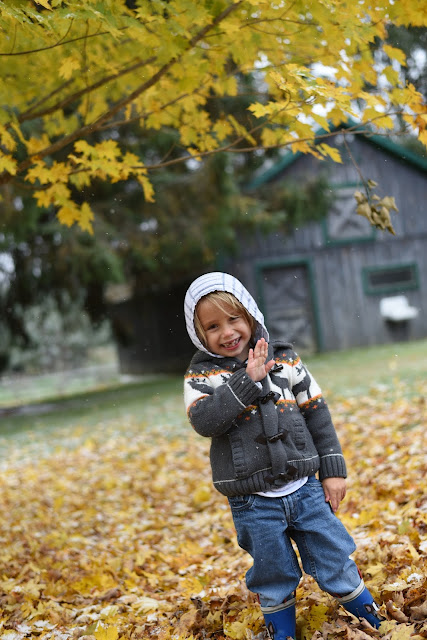 Bob and I have this little "joke" we play out for impending winter weather. He gets this serious smirk trying not to smile face and says in his trying not to laugh voice something like, "Um, mom... I'm very sorry to tell you this, but..." and I'll start with my look of horror and the corners of his mouth will jump up and down as he tries harder not to smile, "...but, mom, it's going to SNOW this weekend." And before he can even finish I bellow a desperate, "Nooooooo!" 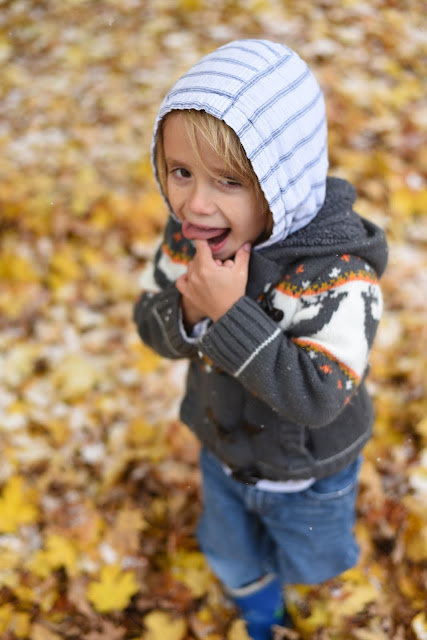 Or we'll be playing outside and a cold wind will pick up and we'll look at each other, and he'll tilt his head to the side with his not-smile, and I'll cry out in a moan at the top of my lungs, "Wiiiinteeeeeerrrr!" And the crazy laughter that follows keeps me from crying. And my dramatics are the joke but they're actually not that far from the real sounds I'm making in my own head.

Whereas I am afraid of the cold, Owen is afraid of being separated from his Legos. He is hilarious and in general tries to be a good sport about anything -- declaring that cold snowy weather is his favorite! despite the fact that last winter we could hardly drag him outside until snow turned to mud. 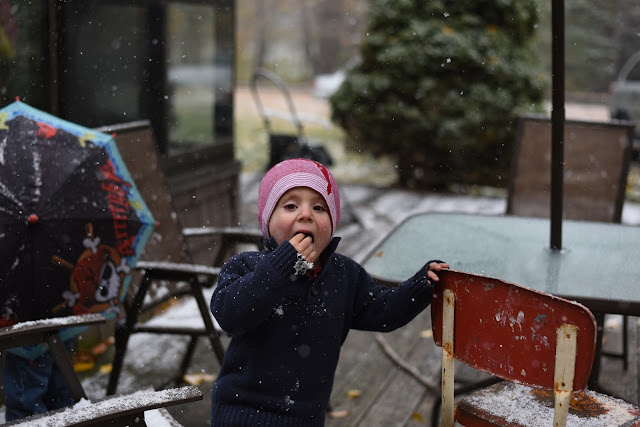 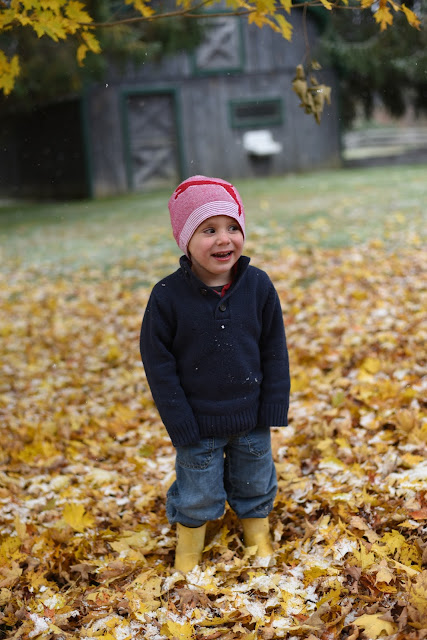 But truth be told, even I can't resist the lure of the first snow. Truth be told again, this wasn't even a real snow, just a dusting. It came down in flurries and then in tiny snowballs and then in bigger clumps, and all three littles were out romping and tasting. Maisy is actually the easiest one out the door-- as soon as I mention the possibility she goes running to the sun room to collect her shoes and coat. 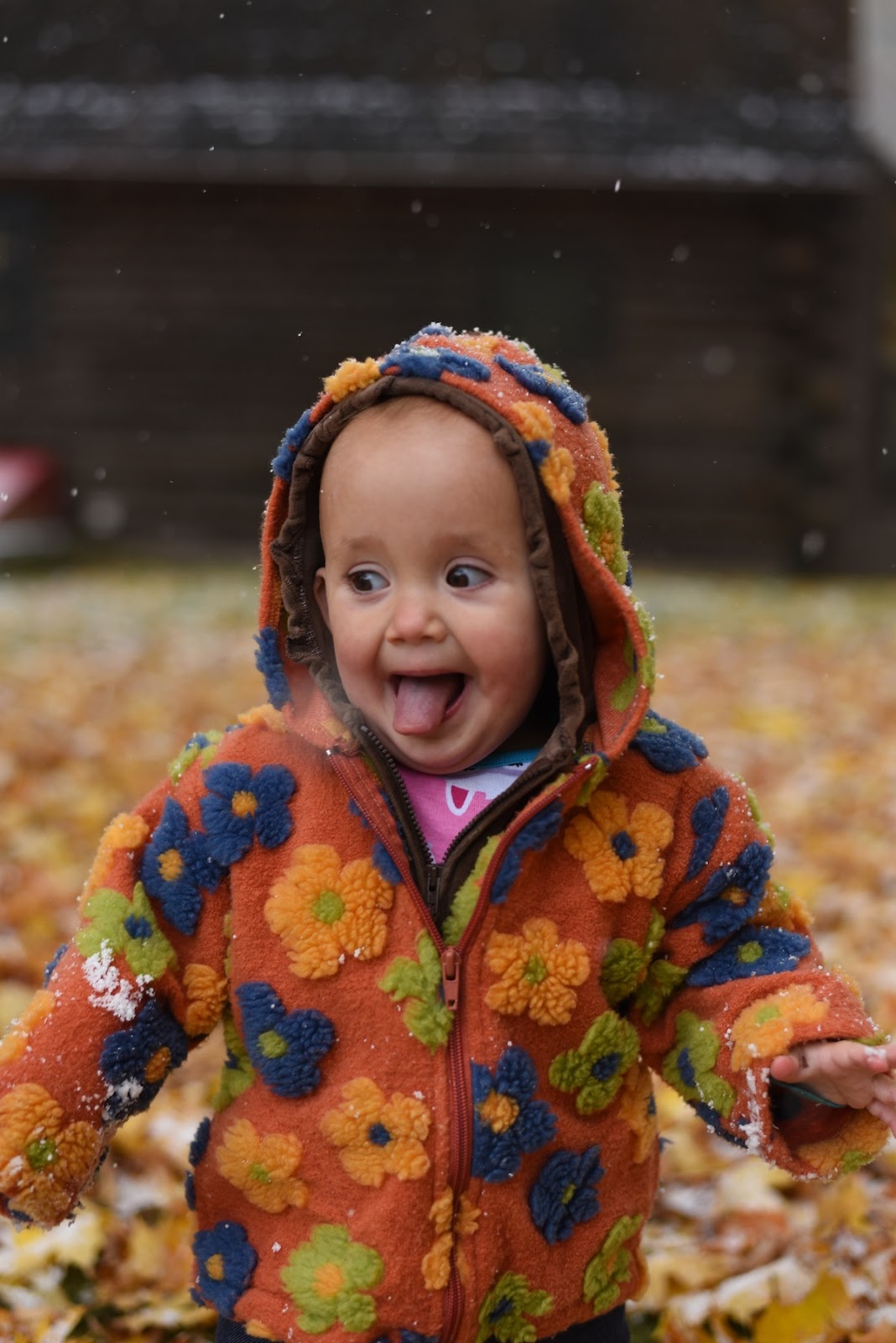 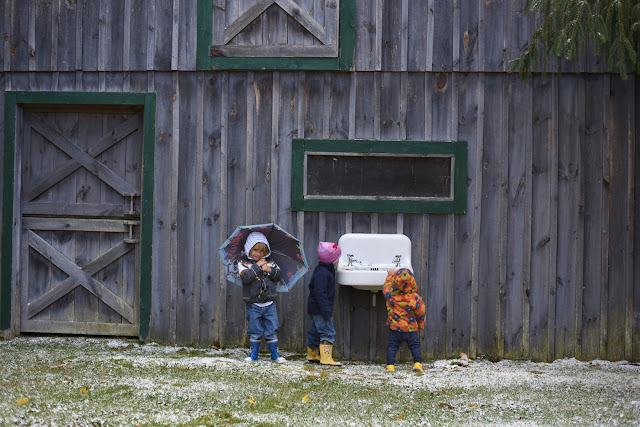 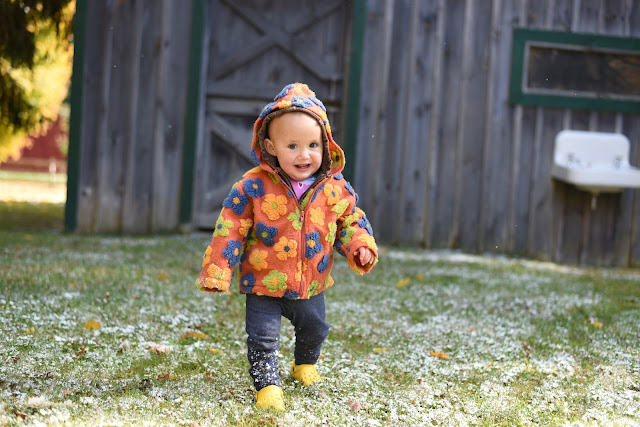 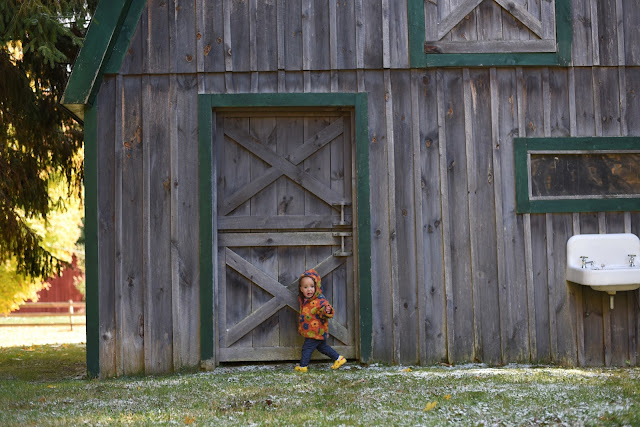 There's undeniable magic in it, that first snow of the year... and snow in general, and water in general! And even I at 31 years and self-professed hater of winter (not necessarily December but definitely January and February... and usually March...) even I can't help but marvel, and get a little giddy, at this particular miracle of our planet. 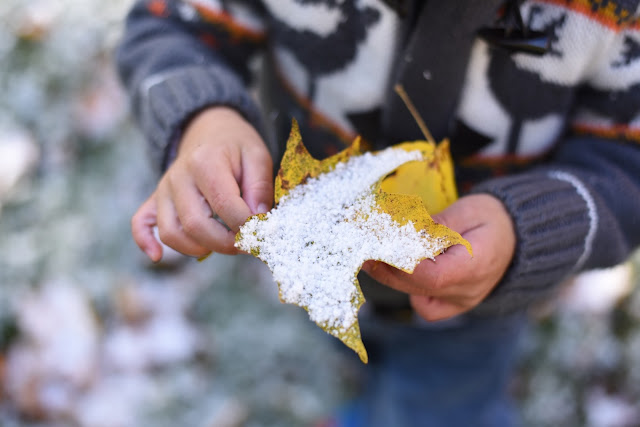 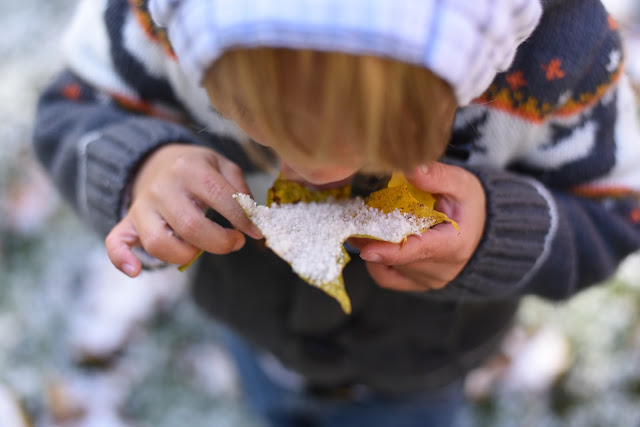 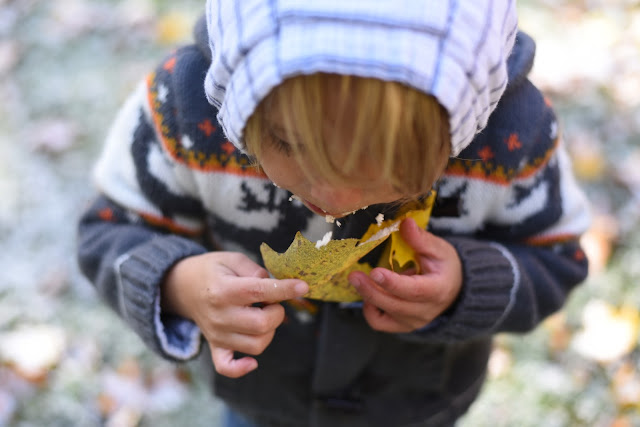 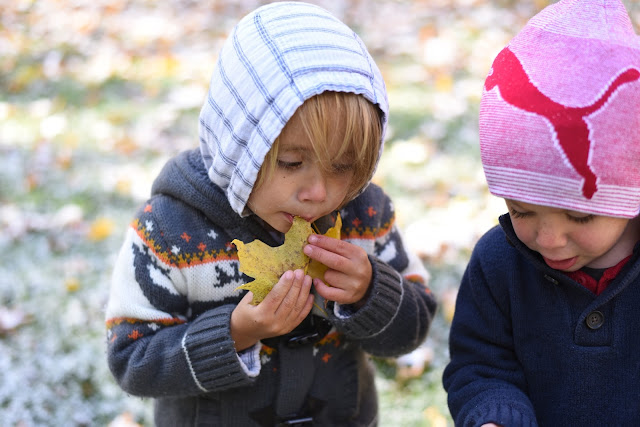 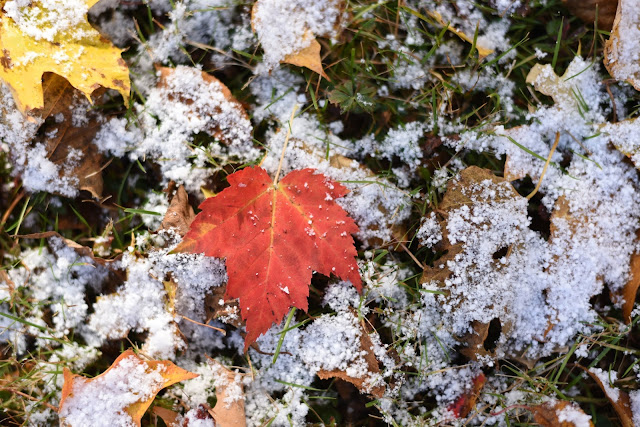 I won't be the first to say that as a parent the wonder is doubled, but it's true. It's not just being a parent, though-- it's being human I think. It's looking through a lens, it's painting a portrait, it's the recording of scientific experiments or baby milestones. 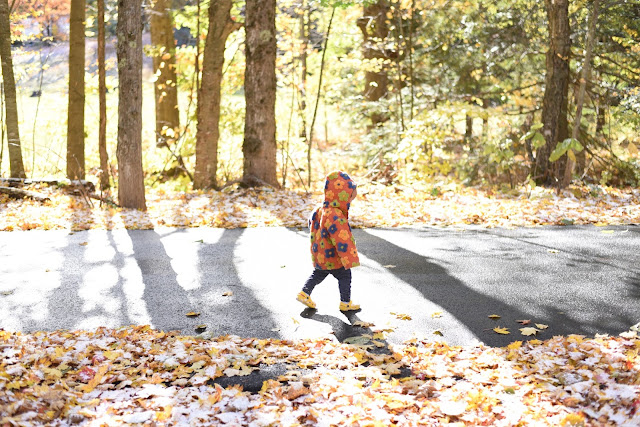 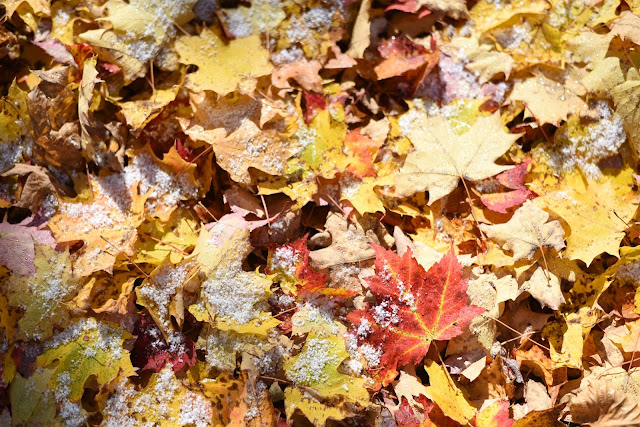 It's the intently observing of another human and of the earth, of deeply wanting to know more. It's caring for another person or thing, and trying to view things though another perspective. It's taking our new perspective and processing it, and then offering it up to God or to others-- even on Instagram! There are so many ways to double your wonder. 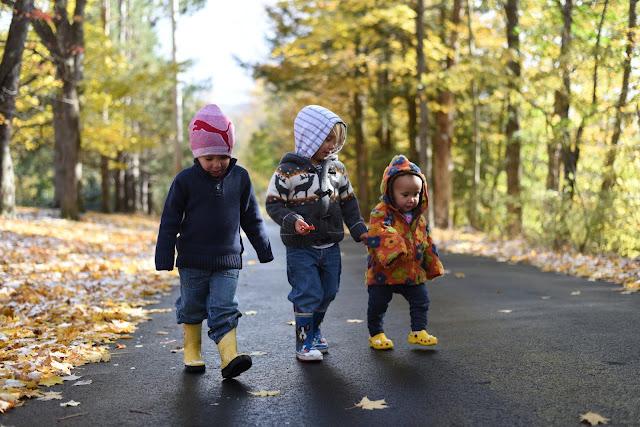 Or triple your wonder, as in my case. 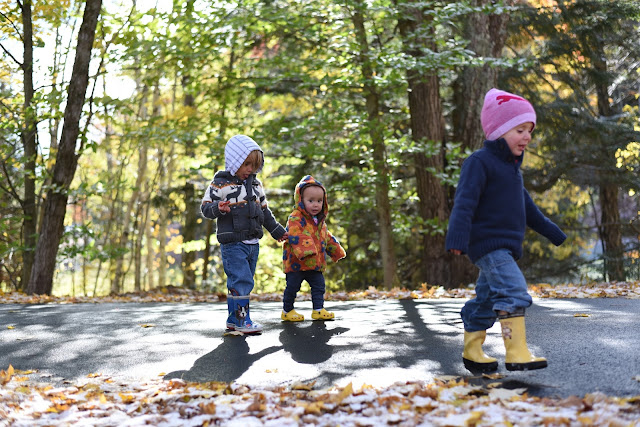 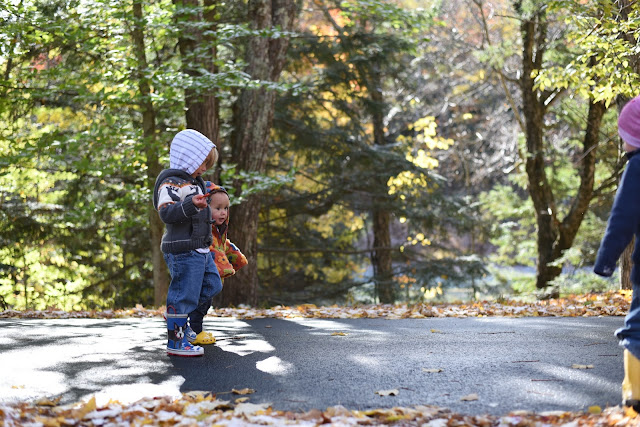 These little humans who love each other just because they belong to each other-- they move me. 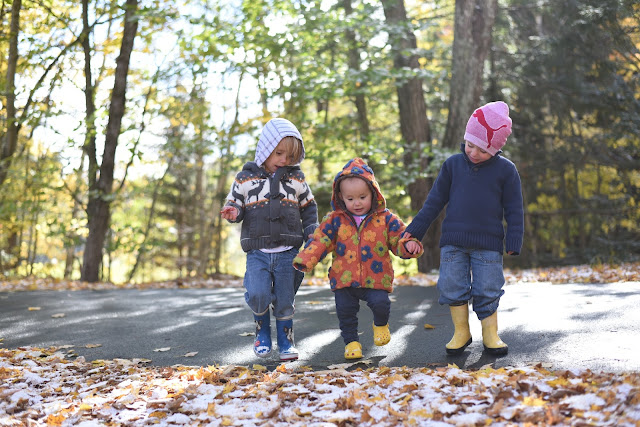 They make me open my eyes wide, crouch down low, take a second look at the moment, hold it tighter. 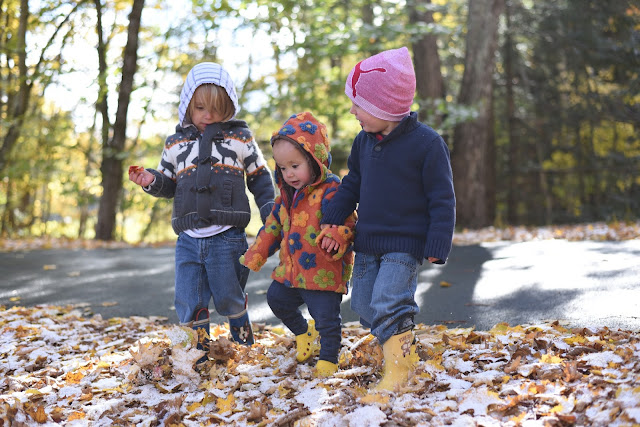 They take me back to my earliest days when the world was so new and that is magic -- but I've found the magic in other experiences too. 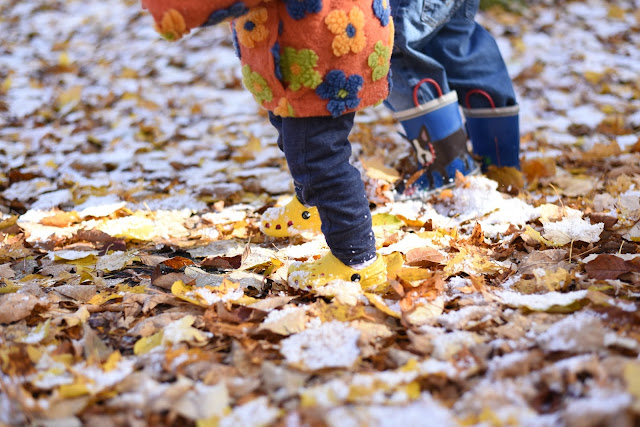 I find it in the crunching of leaves and the delight of fresh snow and in the last bit of golden light and in friends to whom I can say I'm lonely, and they'll say I'm lonely too. 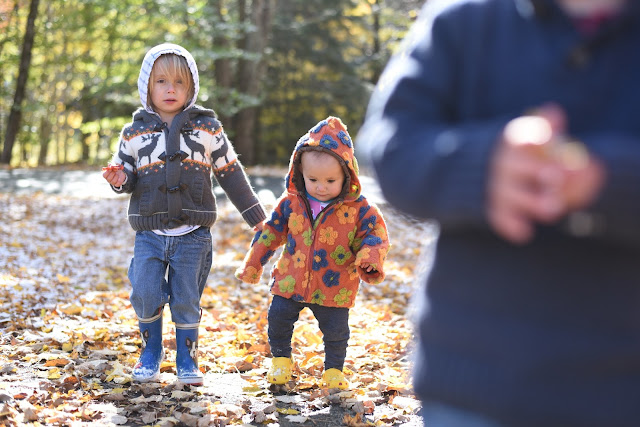 Sometimes the magic is in going back in time or catching glimpses of myself way back when... but mostly it's about the present and the magic of them now and the gripping grace by which this life is given me. It's looking into their faces and seeing the wonder of these marvelously new human beings -- and having the opportunity to share in it... my words don't do it justice. 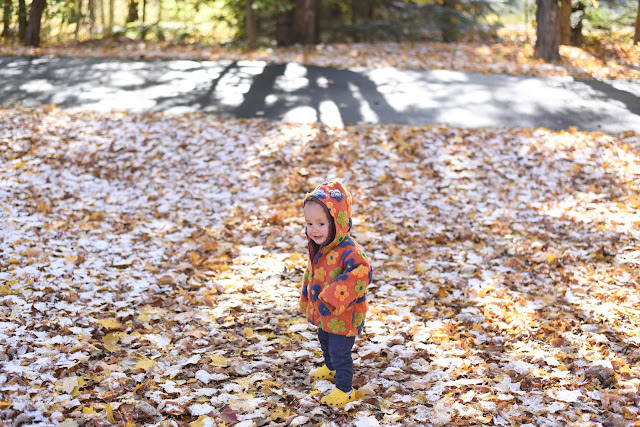 Snow frosted leaves and golden sun but the most beautiful part is my little one.

PS. I recently watched this TED talk which was very inspirational to me and perhaps to some of my words here. So worth your time -- have a watch and become a part of the artwork.

PPS. I really need to move my blog, because it looks simply awful on mobile and I don't even know what blogger is doing to my images. One of these days... :/
Posted by conveyableflow at 8:56 PM