At the risk of sounding like a total nerd, I've used the term sensory box just because I don't have anything better.  I got the "sensory box" idea here doing some blog-hopping one day.

The first we one we made is sort of a construction zone -- we call it the rock box.  It's just a shallow plastic tote with black and natural aquarium gravel plus a collection of "special" stones from various beaches and whatnot, plus a bunch of trucks and machines and guys and a couple ladies too.

Bubbs is past the put-everything-in-mouth phase, which obviously you need to be to play with aquarium gravel, so my biggest worry was that he'd just chuck the rocks all over the place.  But he's been good.  Before I take the lid off I always say, "What's the rule?" and Bob says, "Rocks stay in vuh box."  And if he gets too crazy and careless or occasionally just straight up dumps the rocks on the floor, I just help him clean it up and put it away.  And he can try again the next day.  We've had this for a couple of months now, and he still plays with it almost every single day.  A bit hit. 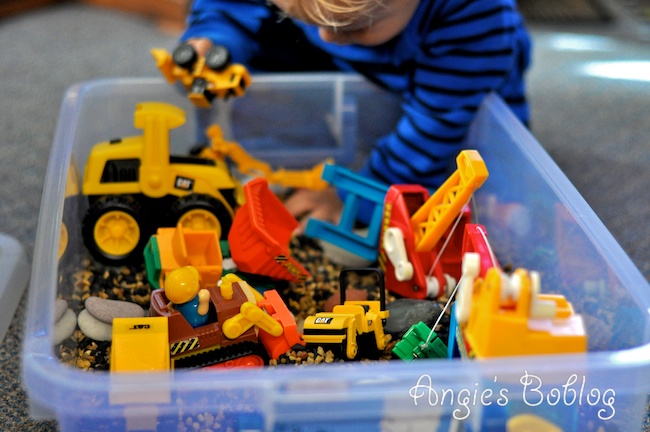 My niece Bailey loves it too (she's almost three).  She just kept freaking out saying, "It's messy in here!"  And she'd pour the rocks on her hands and smile a sneaky smile.  Messy is fun. 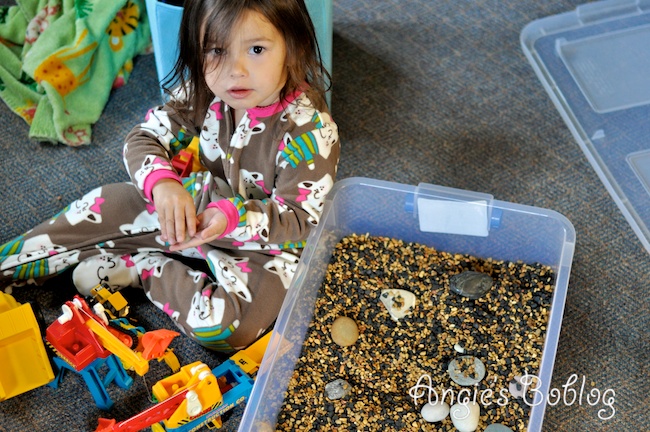 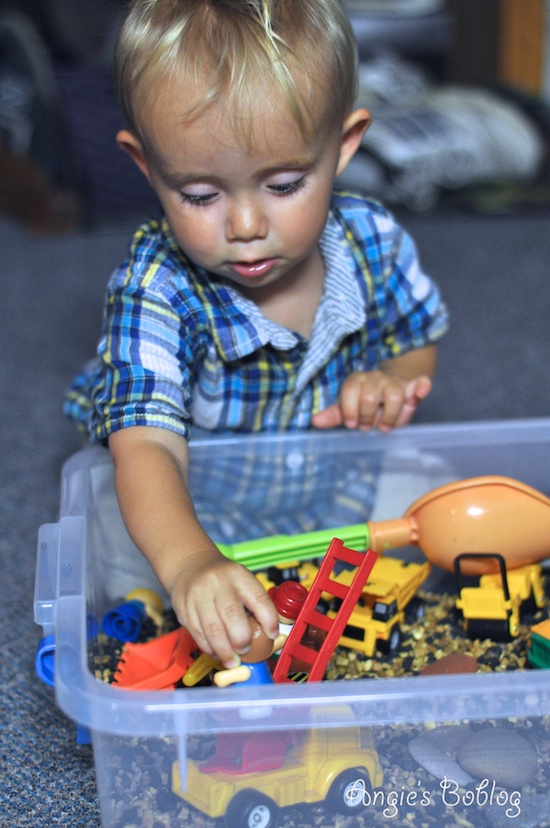 For Bobbert's birthday we made another box -- he refers to it either as his rainbow or his rice.  It's both. 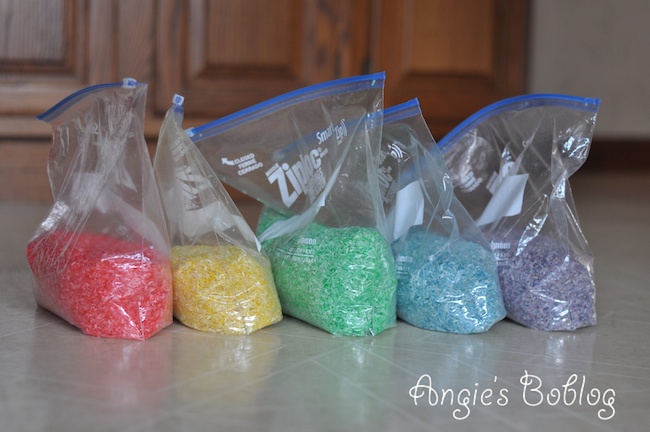 I got the rice-dying instructions here except I used way more rice so I also needed lots more food coloring and Purelle. 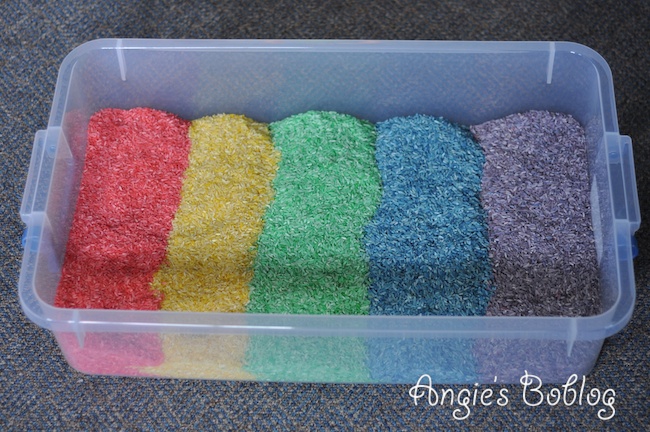 For now the implements in the box are random extra things from my kitchen plus a couple of dollar store items.  We need bigger funnels because these don't let the rice fall through smoothly. 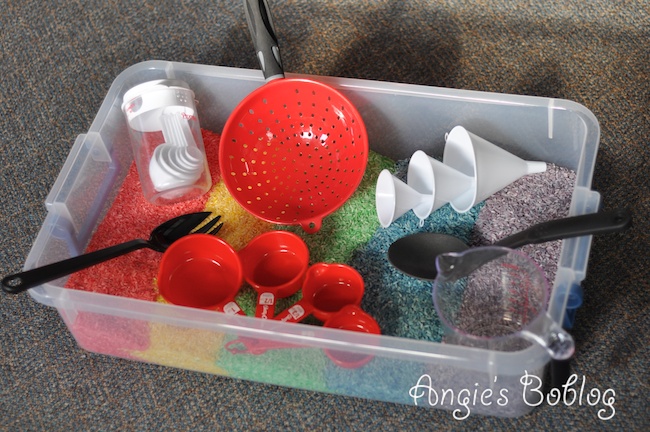 The rainbow rice is super fun, but so far it is a thousand times messier than the rock box.  Bob can't help it; he just gets crazy with the scooping and pouring practice.  He fills the a funnel and the rice hesitates just long enough for him to move the funnel so that it's no longer safely over the box before it pours out onto his lap or the floor.  I made the mistake of letting him try this out on carpet the first time, and I don't think I'll ever get all those grains out.  Whatevs -- we'll just call it the new rainbow look in the play room. 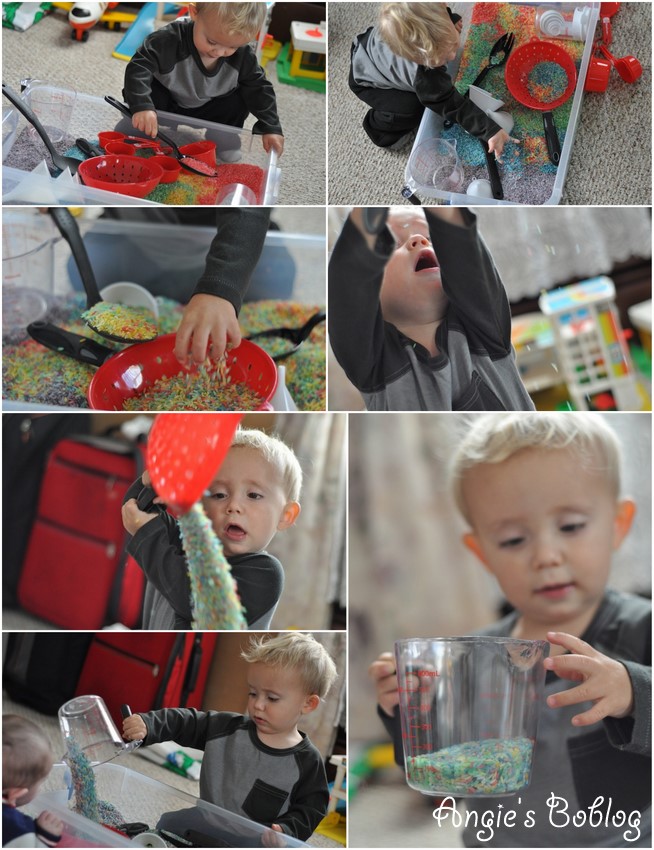 Now we play this in the kitchen instead, which is at least easier cleanup.

And it seems like he's learning, so I won't retire the rice box just yet.

Posted by conveyableflow at 3:01 PM