jesus vs. santa {and fun times at ioka}

I didn't mean for my post title to sound like a Christmas battle.  It's going to be more of a rambling I'm sure.

Bob's still a tiny bit young to fully get all of the ideas swirling around at Christmastime.  When he asked me during book time one night whether Santa was really real or not, I wasn't quite prepared.
Me: "Do you think he is?"
Bob: "But is he?"
Me: "Do you want him to be?"
Bob: "No.  I don't like Santa.  I don't want him to be real.  I just don't want him to walk and talk."
Me: "Ok.  He doesn't have to be real if you don't want him to be.  But if you do want him to be real, he can be.  Because that's what makes Santa real: people believing in him.  Santa's spirit is all about loving and giving, and the spirit of Santa is very real.  But do you know where it really comes from?  Jesus.  Jesus is really, totally real.  And He is the best gift of Christmas."

As a kid I never believed in Santa; my parents never tried to let anyone else take credit for all the presents.  And my mom made sure we knew that Christmas was about Jesus.  There was no Santa, yet Christmas was still magical.  We were still all, Where on earth were they keeping all this stuff!?  We loved reading from our advent calendar every day.  But I remember there being a couple of years when I wished I believed in flying reindeer and a shop at the North Pole, when I would just pretend that Santa was real.  The magic of The Night Before Christmas I couldn't resist.  And, I think I want my kids to experience a little of that.  But at the same time, I don't want to take any of the glory away from Jesus.  I think Ben's closer to the 'no santa' camp than I am.

Does it have to be Jesus vs. Santa?  Or can it be Jesus + Santa?

Anyway... last year we went to Ioka Valley Farms for a Christmas tree and to have breakfast with Santa Claus, featuring their own maple syrup and sausage and it was delicious so we went back this year.  Bob was checking Santa out from a distance but was still insistent that he doesn't like Santa.  But mom wanted the photo op.  I didn't care if both of the pups cried -- just for a second.  {Bob wasn't a huge fan last year; here are the pics: 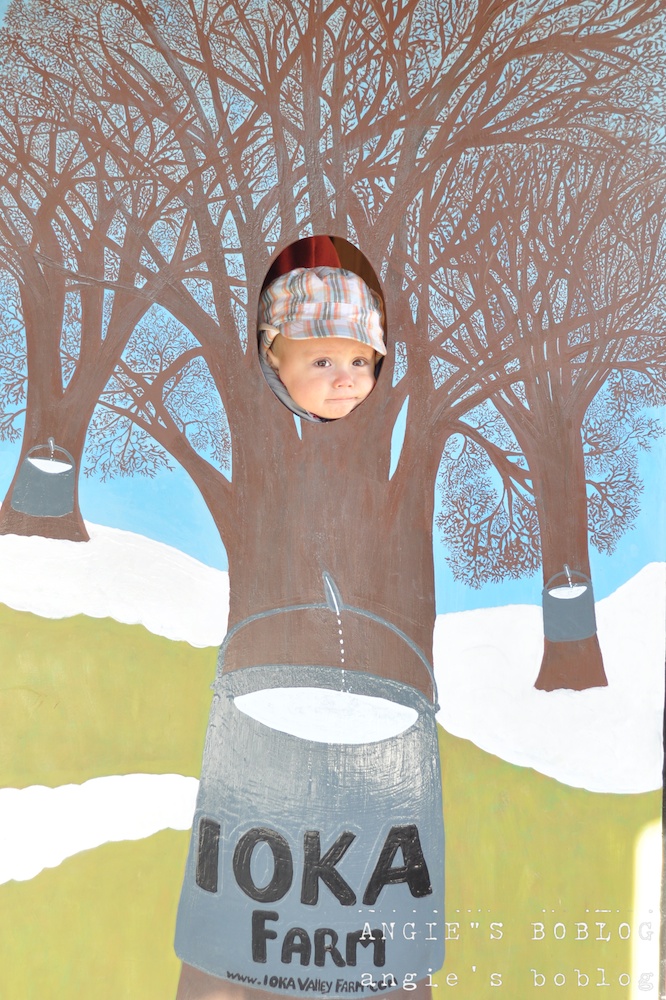 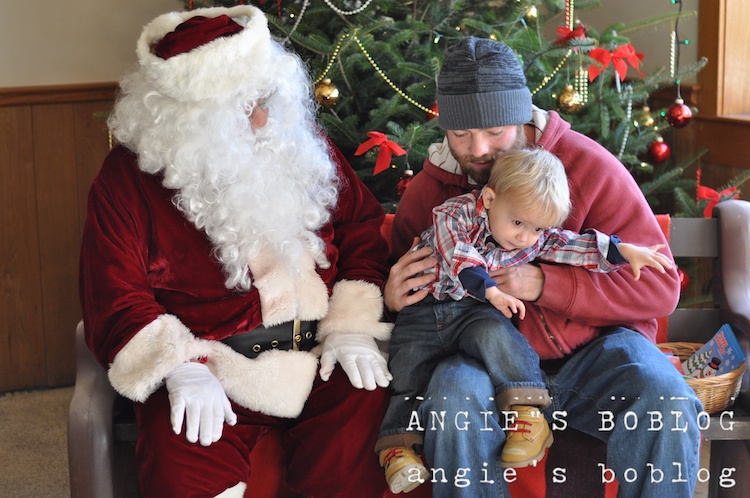 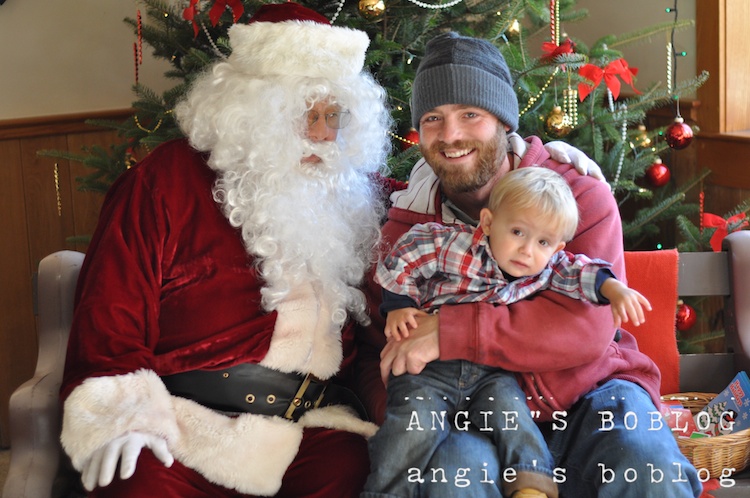 ) So I just thought it would be funny to have one from this year too.

Me: "It's fine if you don't want to tell Santa what you'd like for Christmas, I'm sure he can just send you some clothes or something."
Bob:  "Ummm... Yes.  I really want to go talk to Santa."

So, yeah.  Bob whimpered.  Owen screamed "Bobby save me!"  As expected.  But only for about five seconds.  Then Ben rescued Owie and I held Bob and we crouched by Santa and they had quite a cute conversation.

Bob: "I would like a real puppy bone."
Santa: "Oh!  And would you like a dog house?"
Bob's eyes get huge.  I didn't even think of that!  "Yes, I would like a dog house!"
Santa: "Anything else?"
Bob: "A dog bowl to put my bone in."
And then Santa gave Bob stickers, which Bob used to make a card for him, so now they're pretty much besties.

The hug was voluntary on Bob's part, but once he got in close with the beard he didn't much care for it. 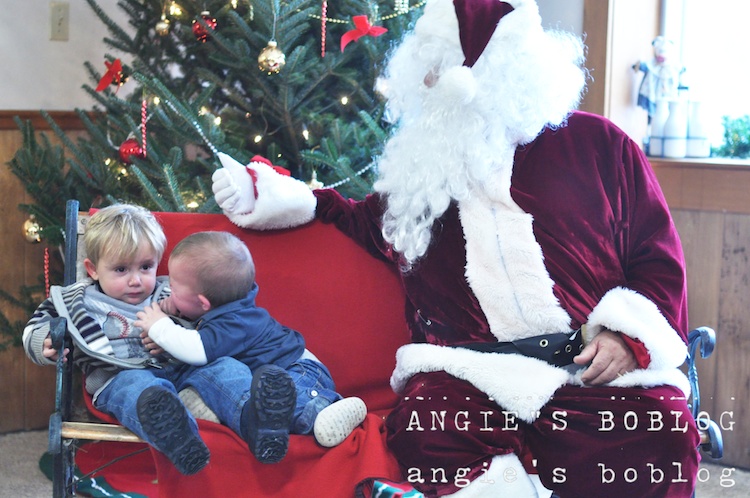 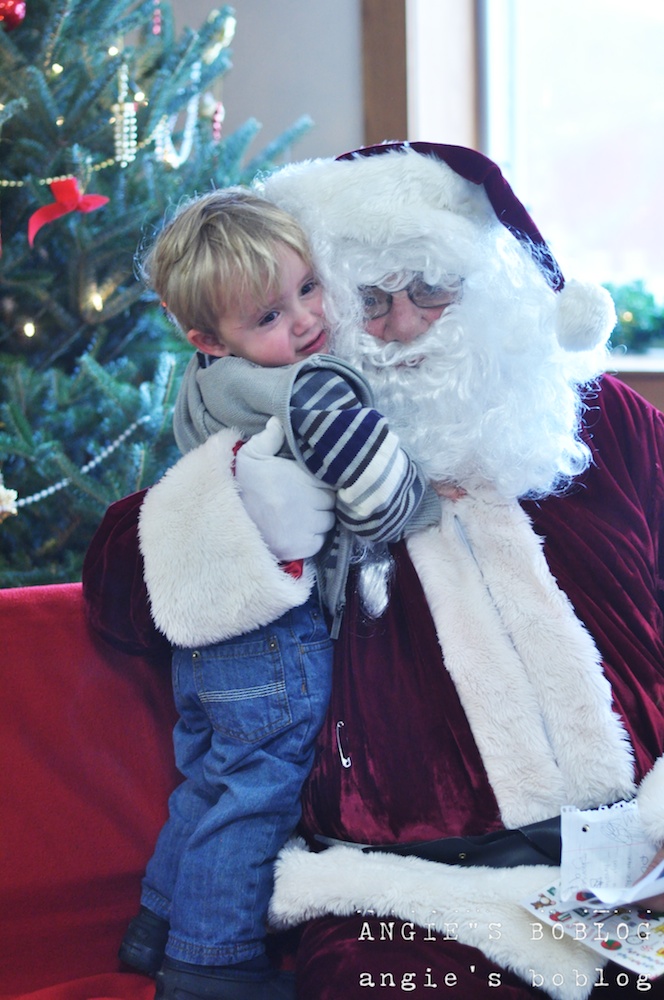 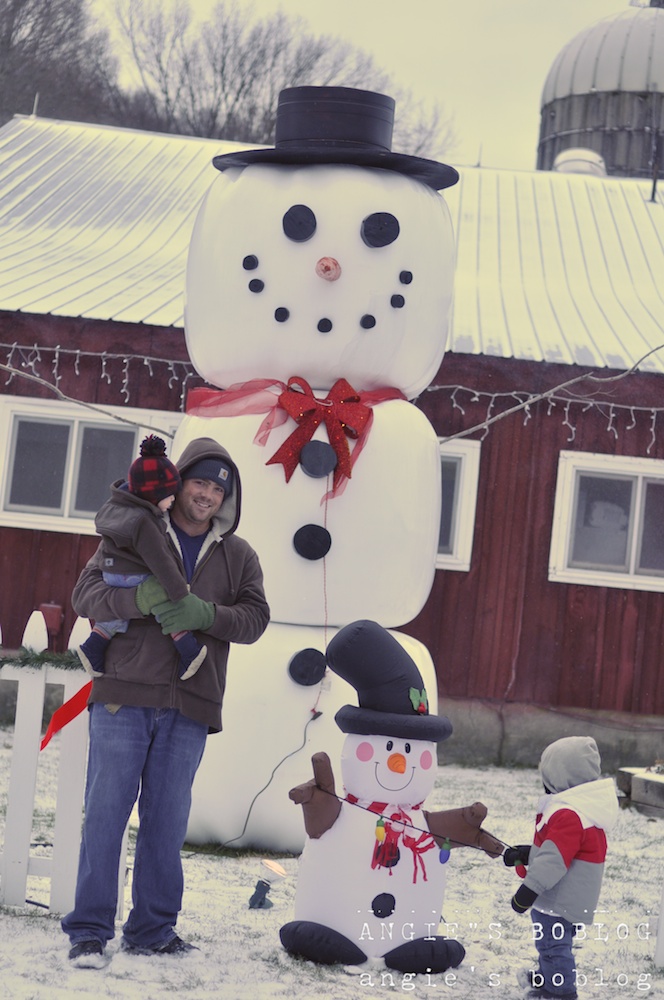 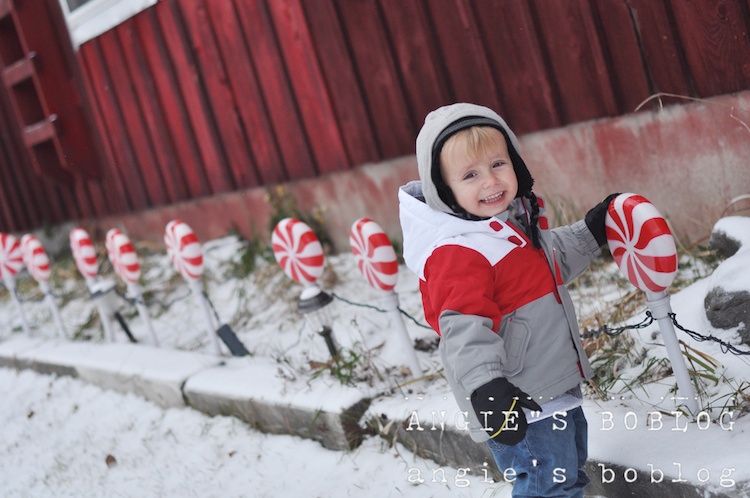 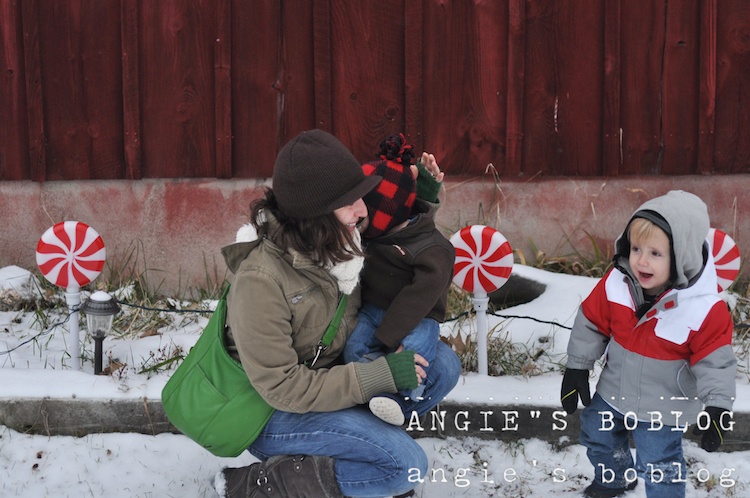 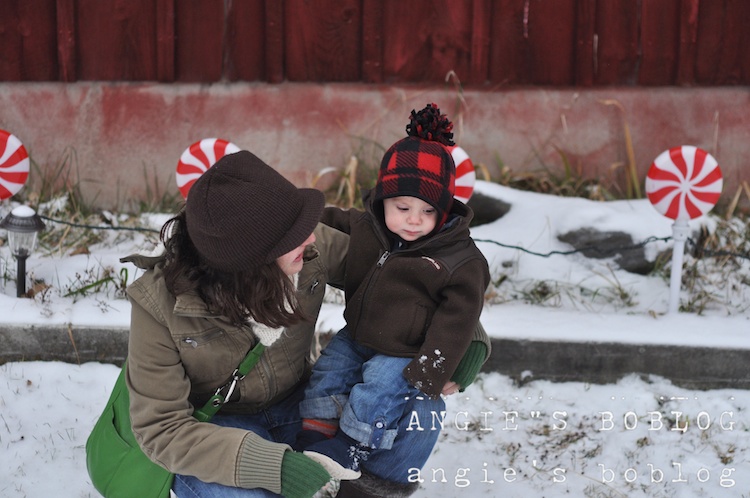