Wouldn't it be nice if I had snagged a family photo including my ginormous officially full term belly on Sunday when we were all snazzed up?  Shame.

Our Easter was lovely.  Bob has been extremely excited, with no reminders or encouragement of any kind.  Last year when he woke up in the morning there were eggs hidden around the house with peanut m&ms inside, and without be told so he presumed they were left by the Easter bunny, and this year -- he remembers.  He remembers it well.  Mostly the whole bit about hunting for brightly colored treasure eggs and munching down twenty or thirty peanut m&ms before breakfast.  So, he's been waiting and waiting for the Easter bunny to arrive and telling Owen all about it.  And in the meantime he was happy to do other "Eastery things" like making cards, dyeing eggs, playing with the Playmobil nativity set, and of course "nailing Wooden to the cross" -- his, and now Owen's -- favorite Easter game.  He is still all about the crucifixion and to be honest it's funny and weird and feels just a little sacrilegious all at the same time.

We went out to Pop Pop's on Easter Sunday and enjoyed a beautiful day on the farm.  The kids hunted for more eggs in the orchard, did some scavenger hunting and exploring, we ate, and Bob ended up nude in the creek flowing from the pond.  I miss the days when I was that cool.

Our egg dyeing fun and mess... 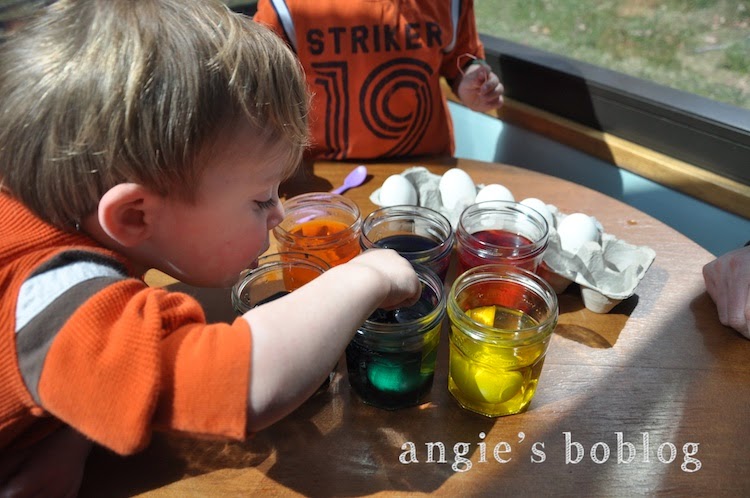 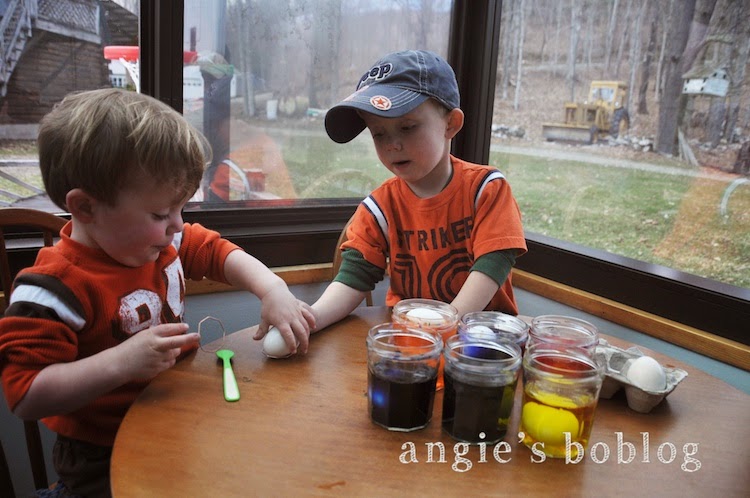 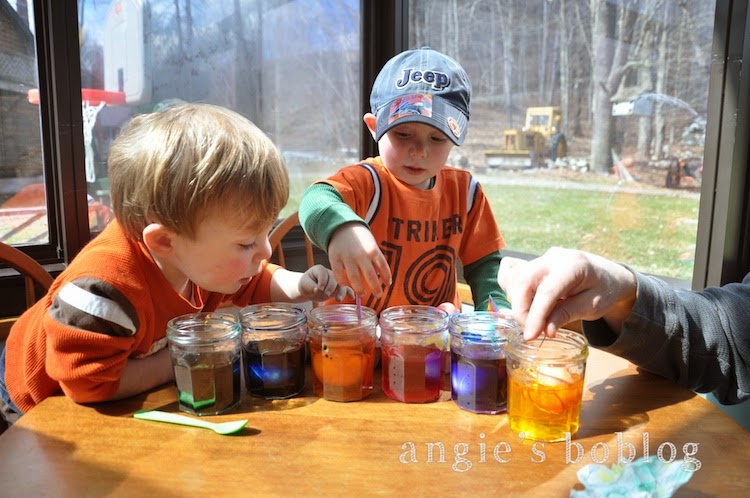 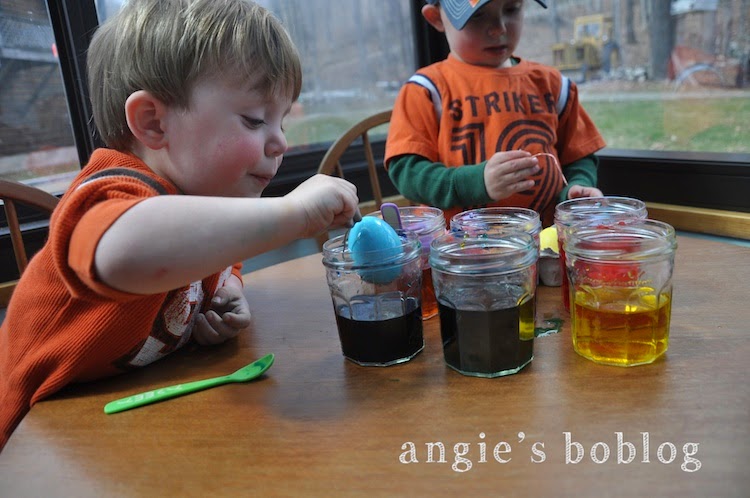 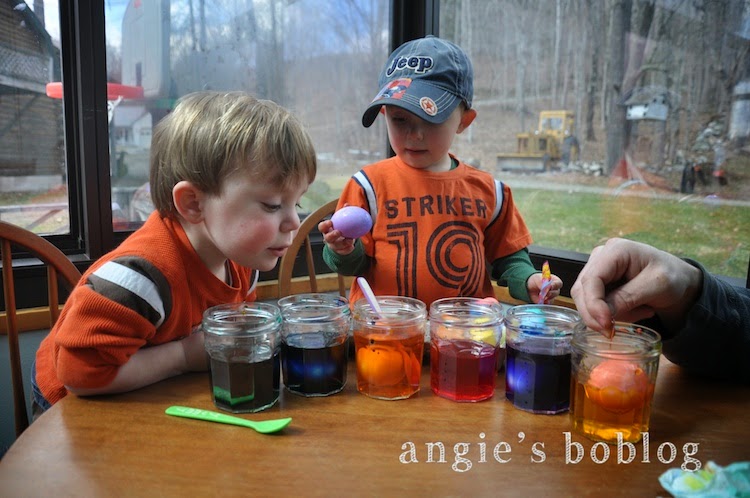 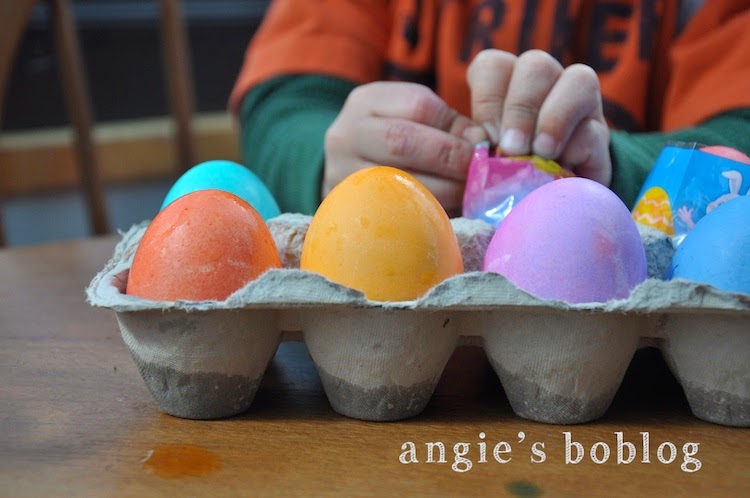 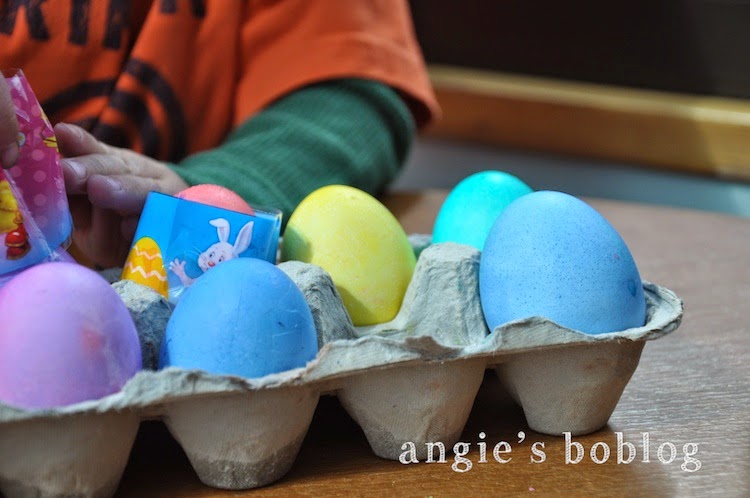 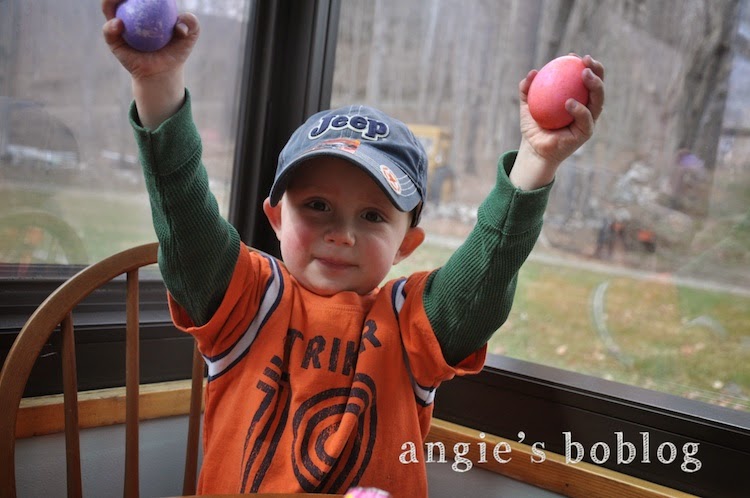 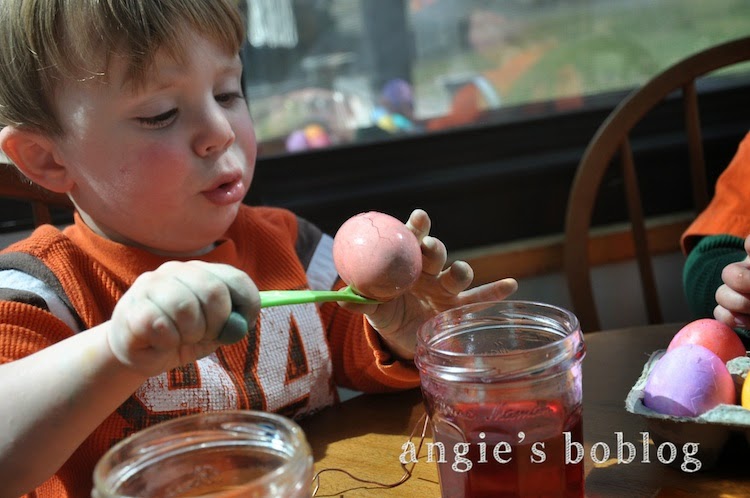 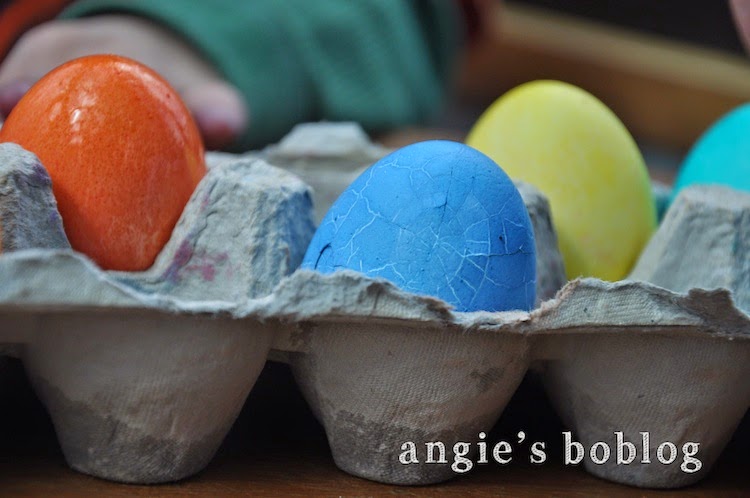 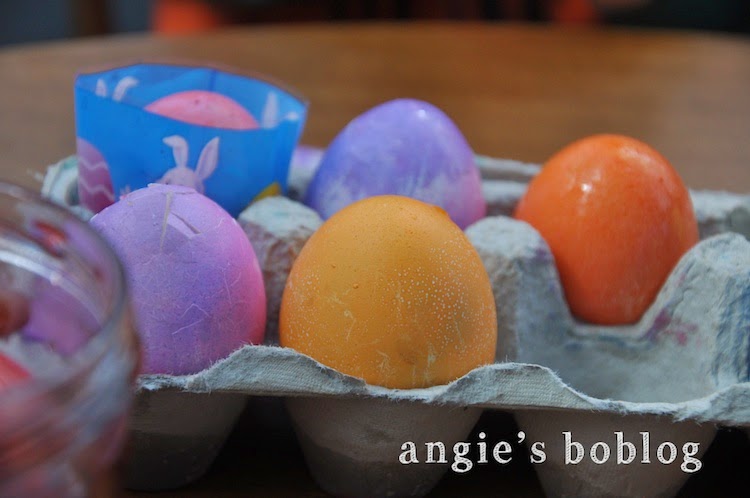 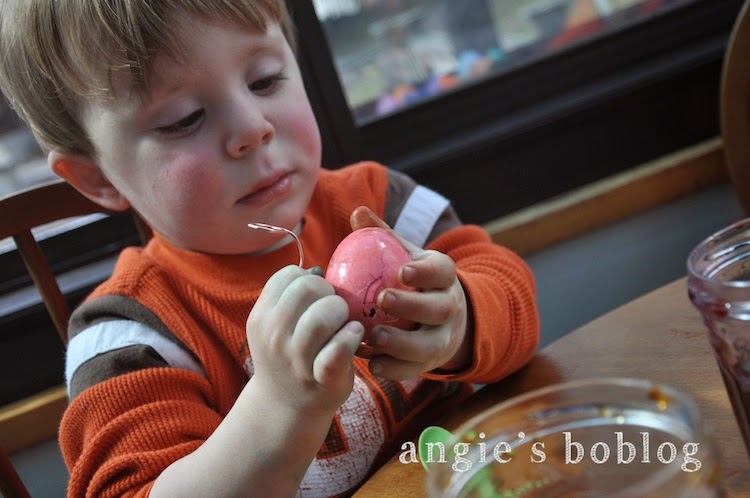 Like last year, we ended up with a lot of broken eggs.  Ben had to leave when they started getting ripped open and eaten. 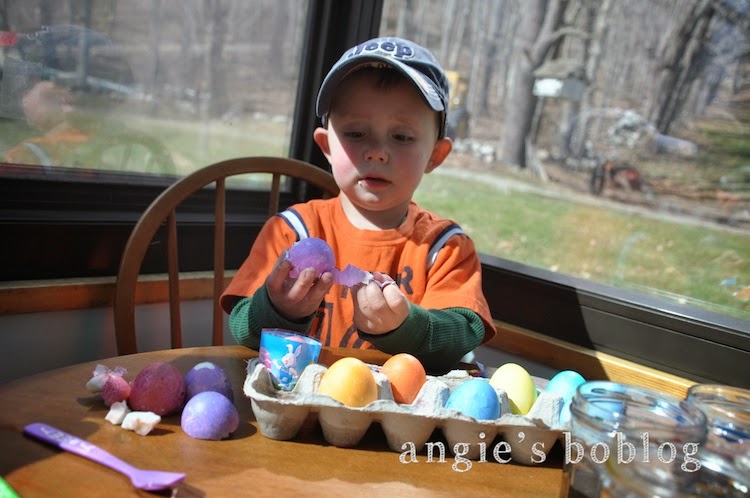 I can't even tell you how many times last week I witnessed this scene of my two sons crucifying each other... 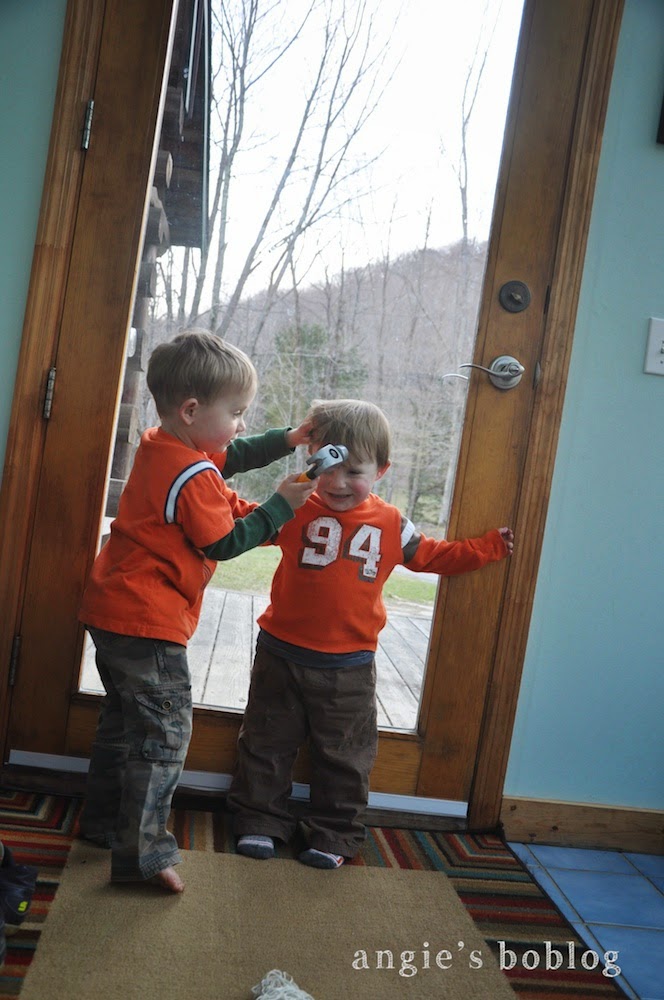 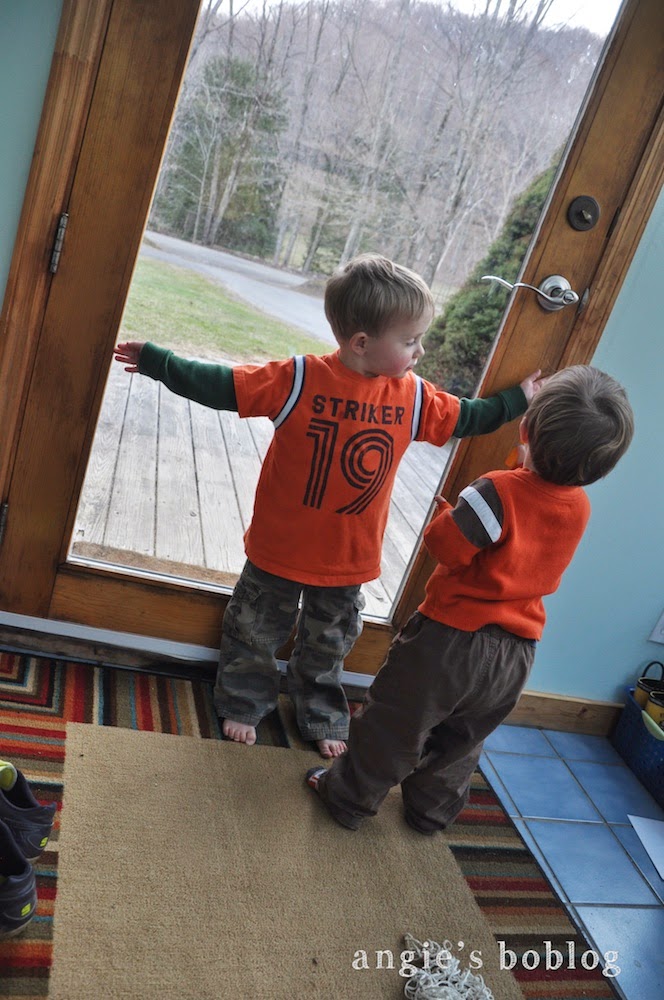 Easter morning -- Bob woke much earlier than O and waited and waited for him and finally we went to wake the sleeping cutie.  Here's big brother getting little bro pumped up for the day... 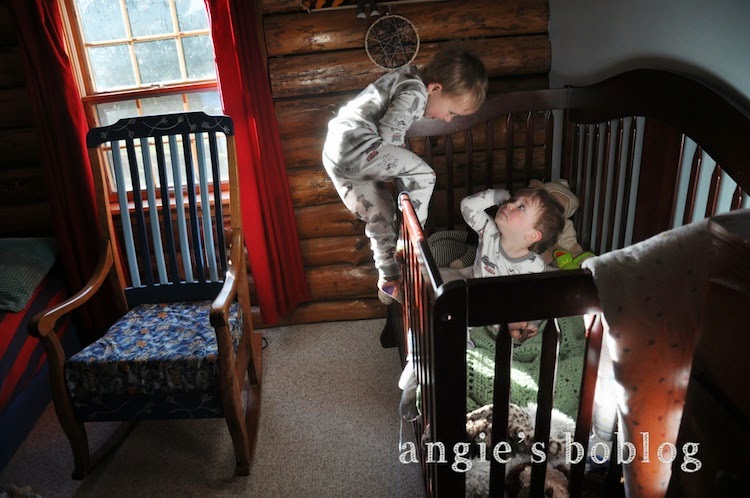 Later on, hunting for eggs at Pop Pop's with Vianne and Novelyn (and the chickens)... 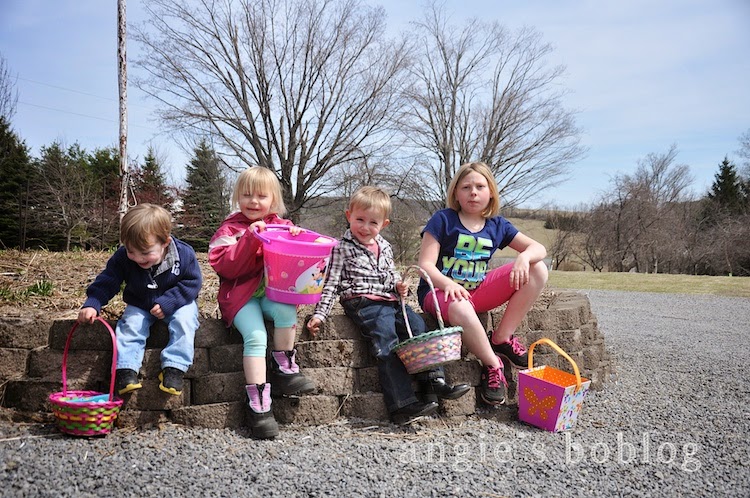 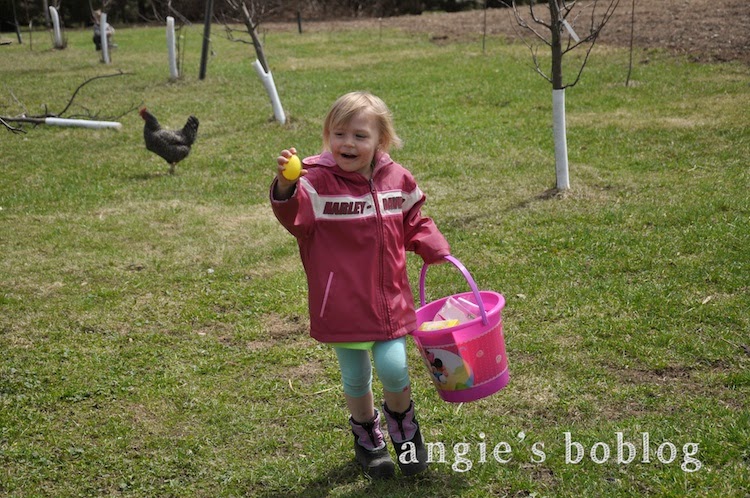 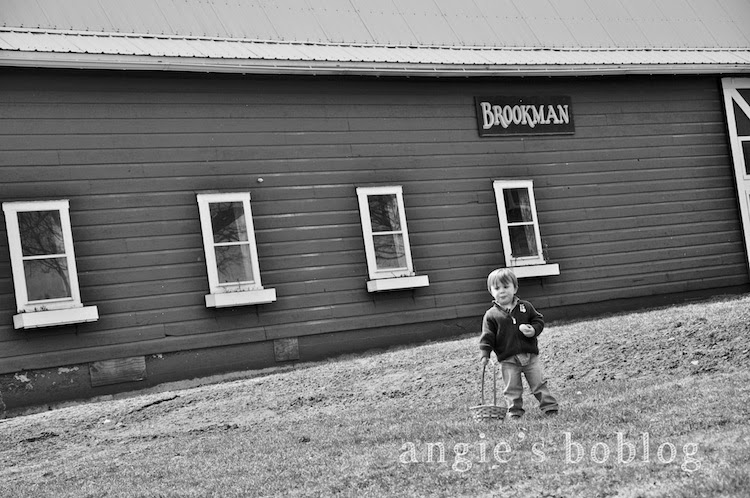 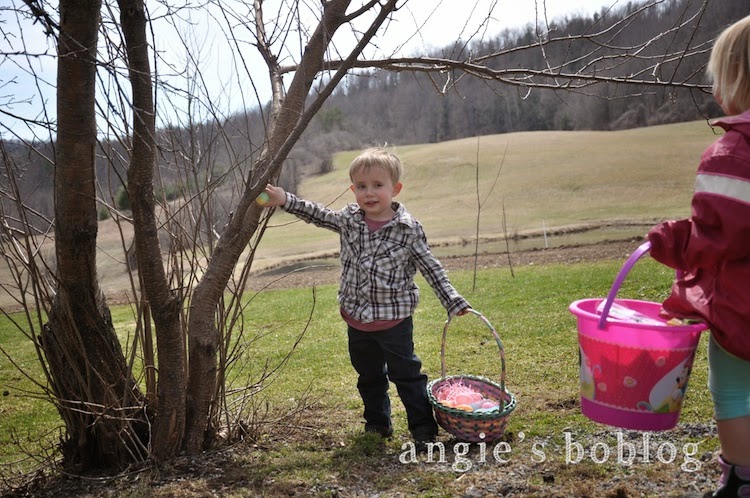 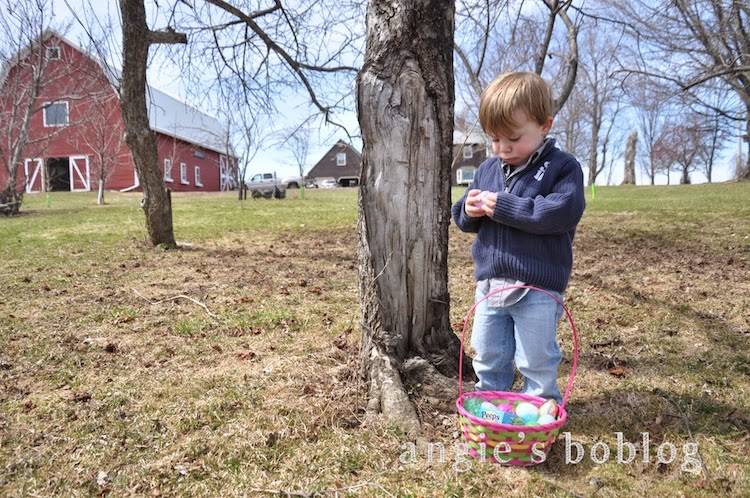 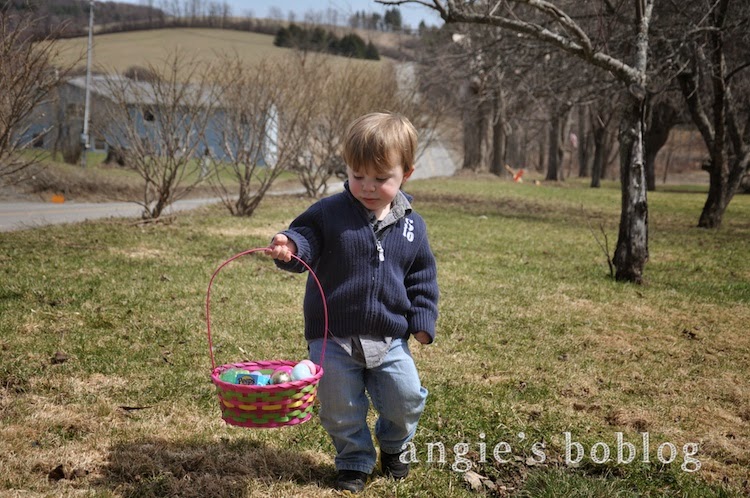 Owen on this little garden wall: "This is my bed.  Are there any rocks around here that I can sleep with?  Yes, there are!"  And he picks up a handful of gravel and uses it as a pillow.  Goofball. 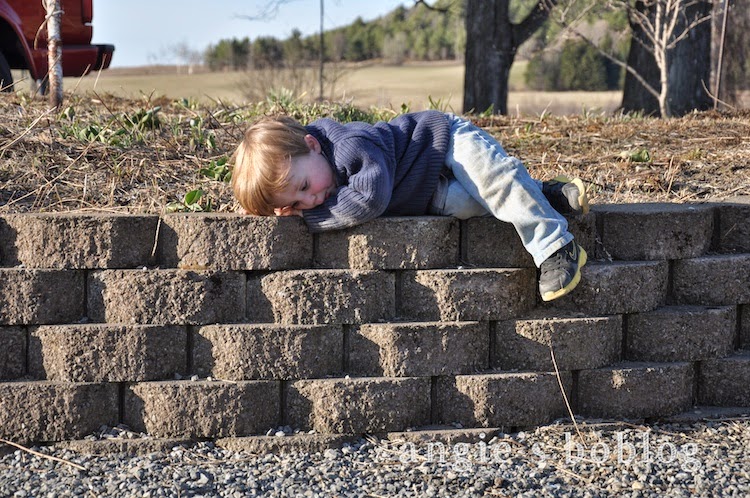 And crazy Pupper, who cannot resist getting wet, ever.  It was a nice day, but not that nice.  We're talking about air in the 60s and water in the 40s probably.  But there he was, ripping his clothes off and hopping back and forth across the stream like a little motherless Appalachian boy.  Wooden started trying to remove his clothing as well, but I told him he wasn't old enough to catch pneumonia yet, and he conceded. 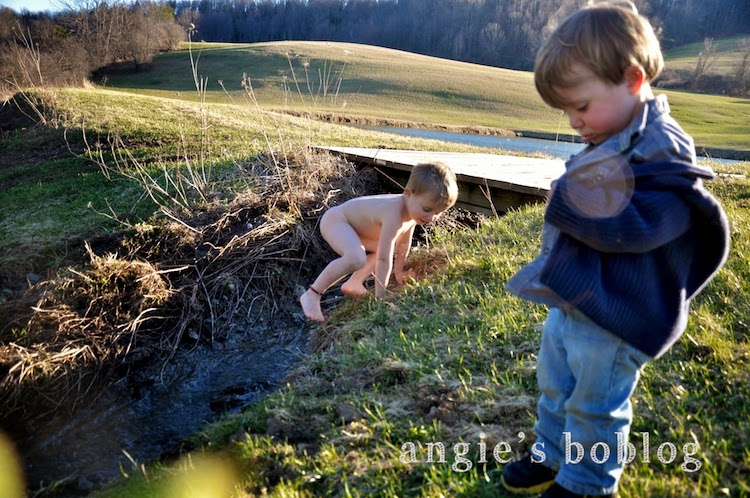 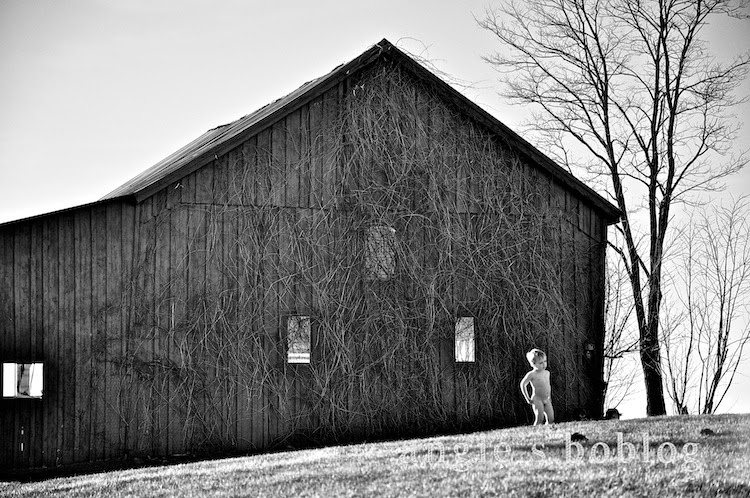 That was a bit of a photo overload, I'll admit.  But when I only make it here twice a month I've gotta make it count, right?

Peace!
Posted by conveyableflow at 10:32 AM