We've been sick with a cold around here, the kids and me.  The past few days I've been on the mend but a couple before that were pretty rough.  You should've heard me reading Runaway Ralph with my nose all stuffed up.  The other day when I had to quit because the half chapter had taken everything out of me, Bob said, "You still do Ralph's voice really well!"  Yes, I'm sure my sick reading voice is very entertaining.

Bobby and Owen take their illness in stride, perpetually sucking boogers up (Bob) or letting boogers run down (O) their noses.  Maisy, she was a sad little thing -- pretty much didn't leave my arms for 48 hours straight, sleeping or staring at me with glossy eyes.  We had one very rough night of sniffling and coughing, and as awful as it is to see your baby sick, it was beautiful in a way.  She's a month old now, and suddenly much more alert.  She spent her first two weeks sleeping, the next two nursing, and now she's on to staring.  It's a stare that looks deep into you; she stares up and says with contentment in her eyes, "You're here."  And so those sick days were beautiful in their own way, because in between those terrible bitty baby coughs were moments and hours of deep connection, where Maisy said, "I need you," and I said, "I'm here."

Last weekend we took Maisy on her first camping trip at the ripe old age of one month; she's officially the coolest kid in the family.  We went down to Connecticut to visit Ben's mom and stayed at Rocky Neck State Park for the second time.  It's a great place for car camping -- nice sites, inexpensive, and you can park in the beach lot for free.

As soon as we got into town on Saturday morning we met Grandma for brunch at When Pigs Fly Cafe in Waterford {great place if you're ever in the Mystic area}.  Our breakfast took a turn for the unfortunate when we were wrapping up our meal and I looked next to me and noticed poop on Owen's fingers, and then all over his back and clothes and the high chair he was sitting in.  It was a hazmat suit type of situation, seriously, poop everywhere.  Ben squeezed between tables and carried Owen out of the restaurant at arm's length.  I did a little damage control at the table with Maisy in one arm, then followed the poo train out to help Ben.  Grandma corralled the waitstaff who whisked away the contaminated chair and the poopy paper towels.  The unfortunate was saved from being totally disastrous by the fact that we had already finished eating and the grassy area out behind the parking lot where we were able to strip O down and give him a baby wipe bath.

We spent the afternoon setting up our campsite at Rocky Neck {Osprey 30 -- a great site that could easily accommodate three tents including our monstrous family cabin} and then hanging out at Grandma's.  Back at the campground we had a late picnic supper and roasted a few marshmallows and sat on a blanket playing with a box of Uncle Matt's vintage Star Wars guys and spaceships {which Bob has been dying to get from Grandma's house for months}. 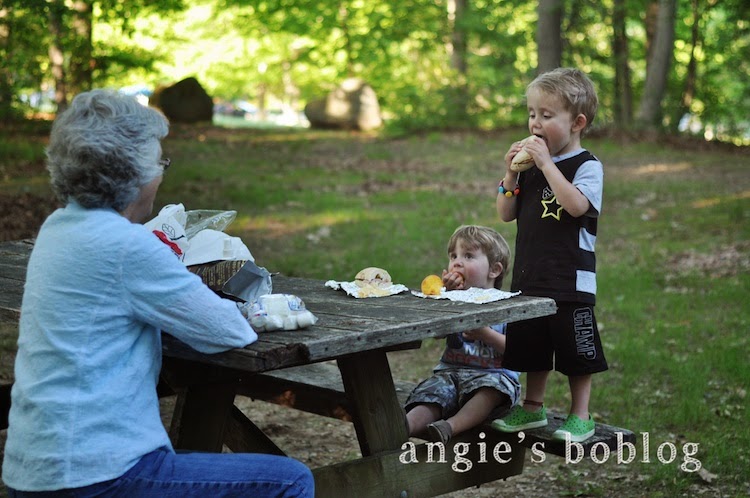 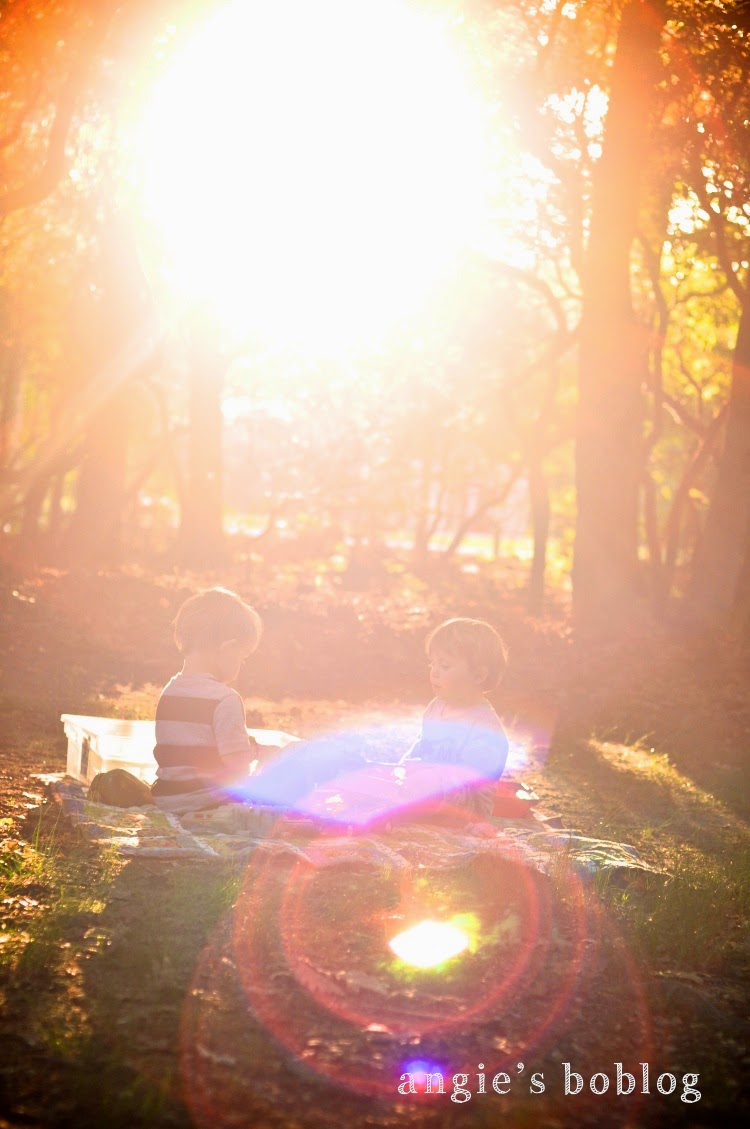 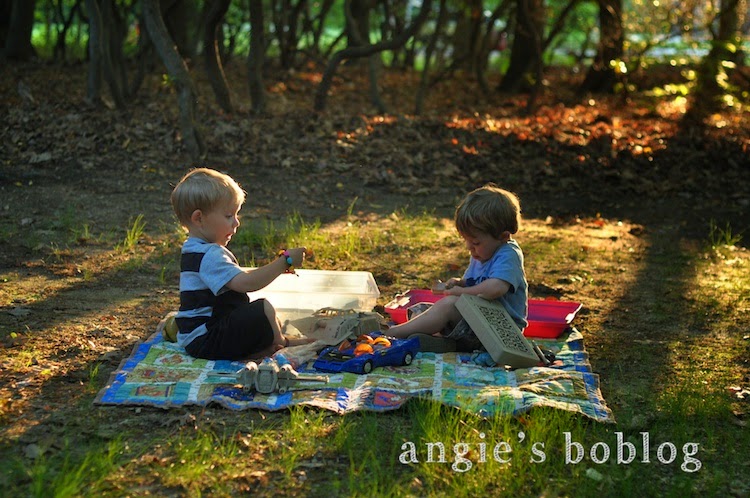 Then I put the little pups to bed by lantern light -- our usual routine but in a tent.  Our kids are pro campers by now and they're totally cool about it.  It's so much better than staying in a hotel because: we have all of our own bedding and living space and no strangers' germs lurking about, and -- even more importantly -- we parents get to hang out at the campfire after putting the little ones to bed instead of sitting quietly in a hotel room watching crappy tv on closed captions. 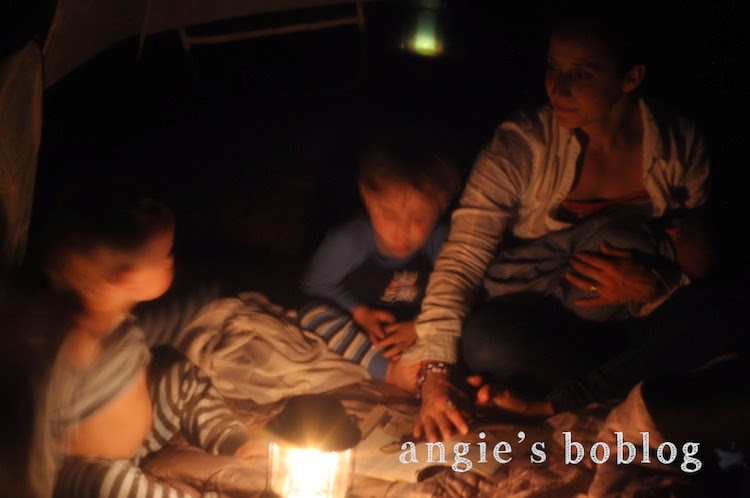 In the morning, we wake to a spectacular view: 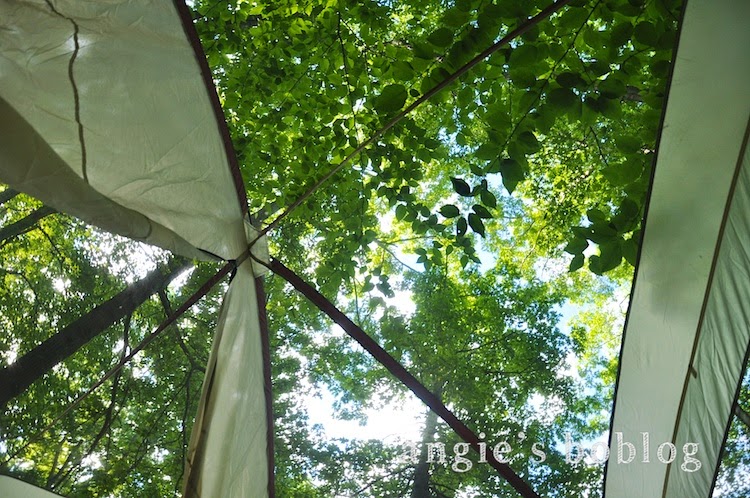 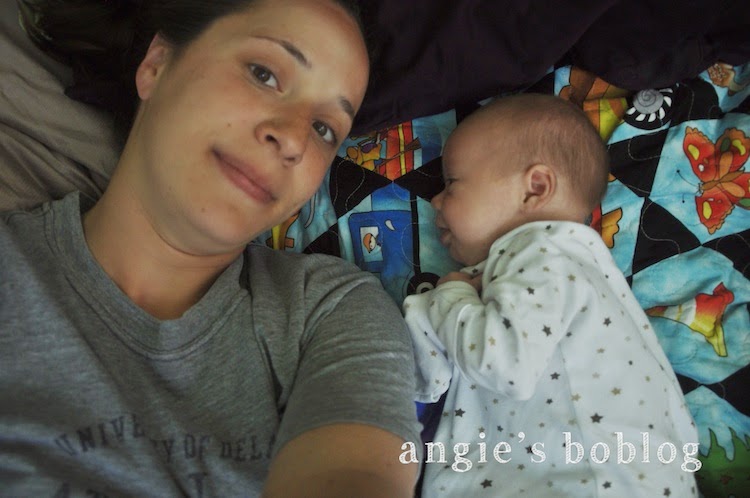 Our campsite was surrounded by these cool little trees which Bob loved because they were just his size for climbing!  He kept making me say, "Too bad Pupper can't climb trees at all," to which he'd interrupt, "Oh yes, I can!" and scurry up the branches like a little monkey. 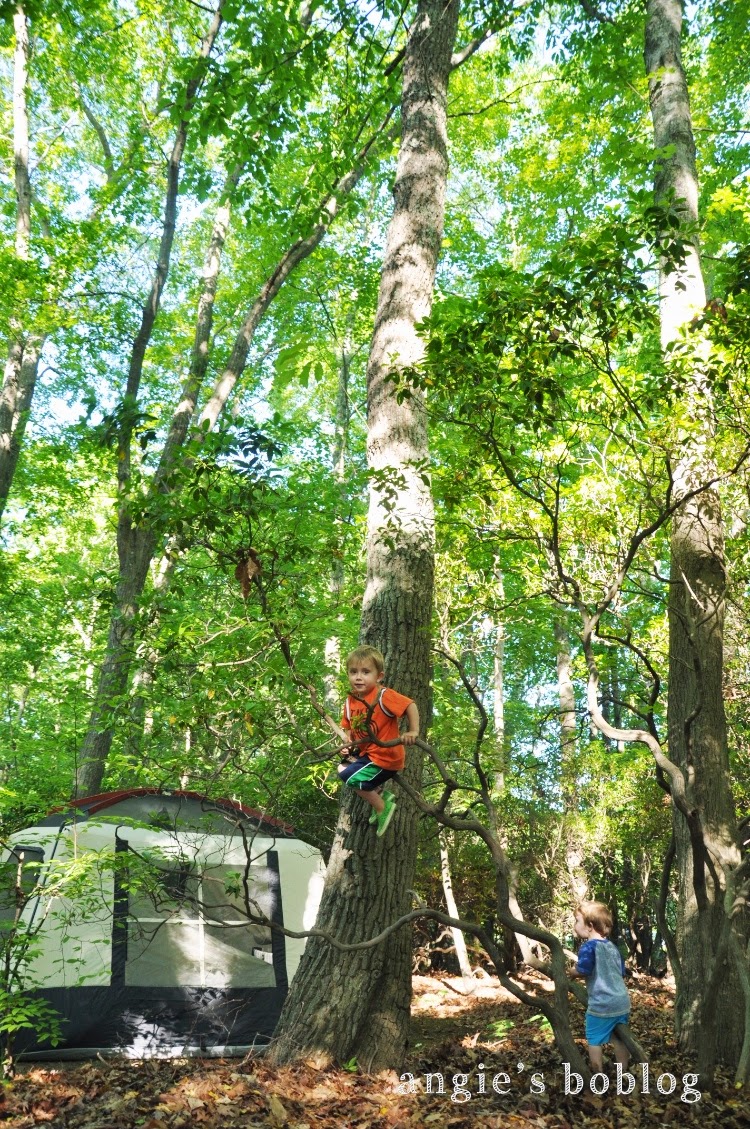 First thing on Sunday morning we hopped over to the beach to let the boys splash around for a bit.  When Ben and I were married and Bob was born we lived in an ocean town, and I definitely do miss the sea air.  Bob was super excited -- he'll swim any chance he gets -- and made sure I brought his bubble. 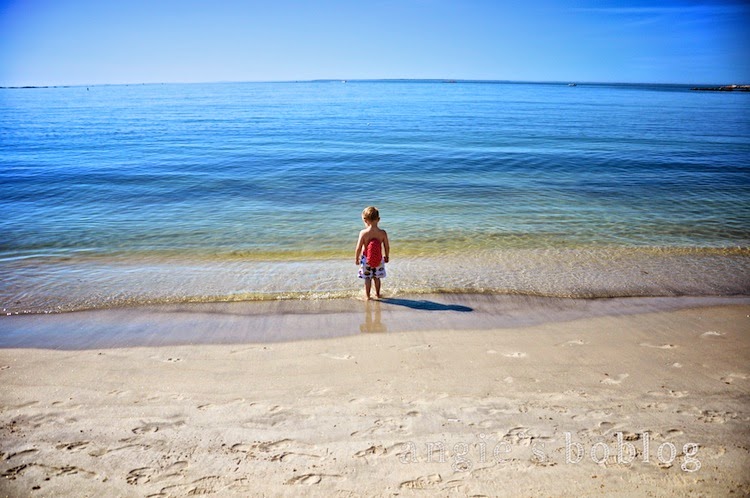 Owen, at first, was unsure of the water and stuck to the sand, but then he got so hot, so I passed Maisy to Ben and tried to console him and convince him that the cool water would feel really good, and suddenly he got it and totally dug it.  He didn't like the feeling of the tide pulling sand from under his feet -- "It's tatin' me away!" -- so I held his hands, helped him balance, then he gained confidence and off he went. 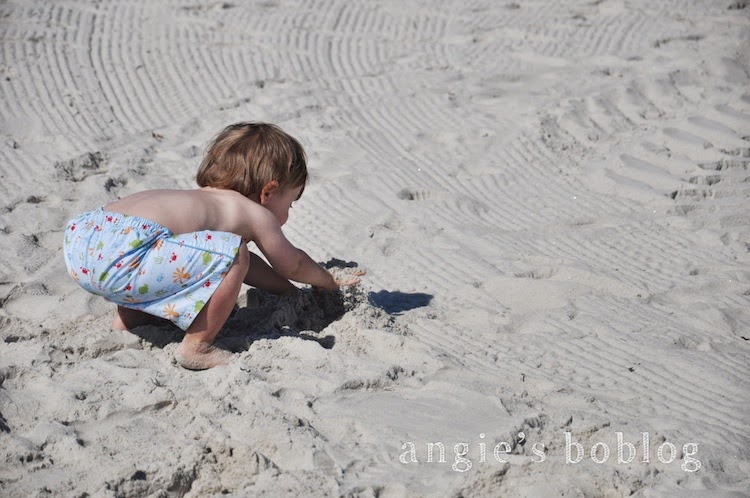 Bob's comment on that awesome feeling in your feet at the ocean's edge: "I'm floating!" 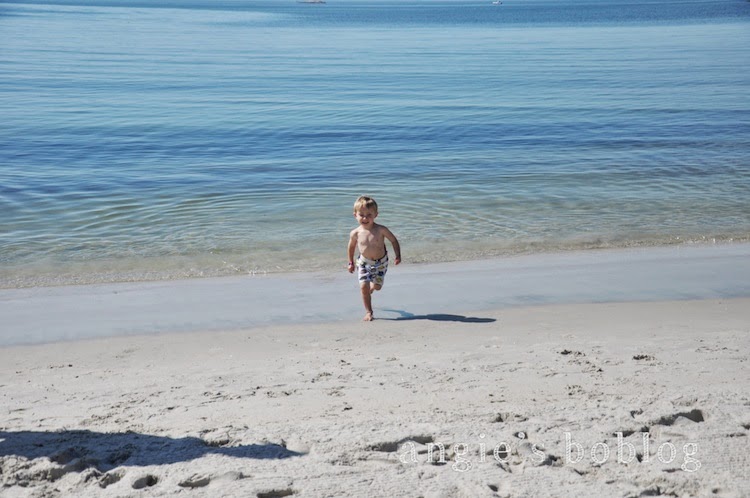 Owen splashed back and forth through the water.  Bob drew Xs to mark spots in the sand. 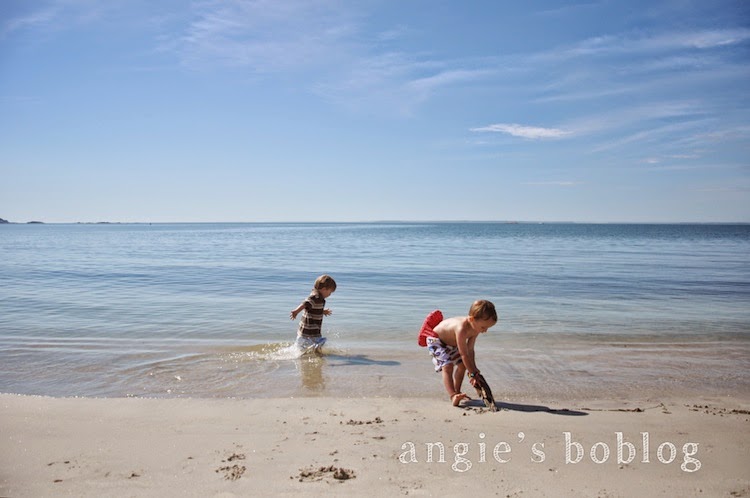 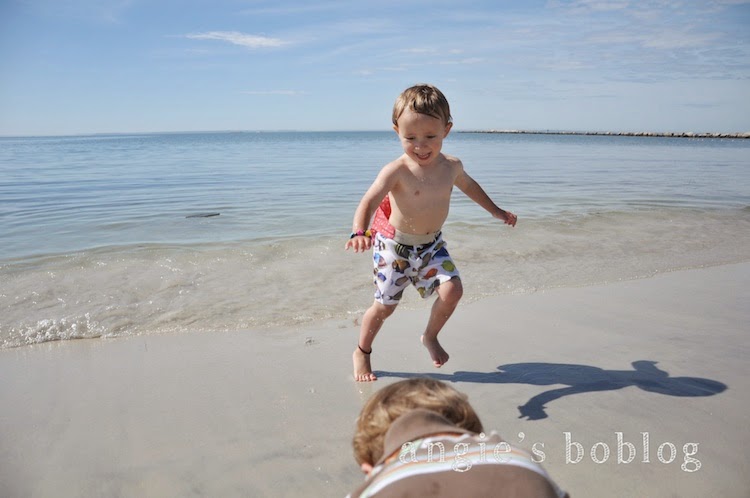 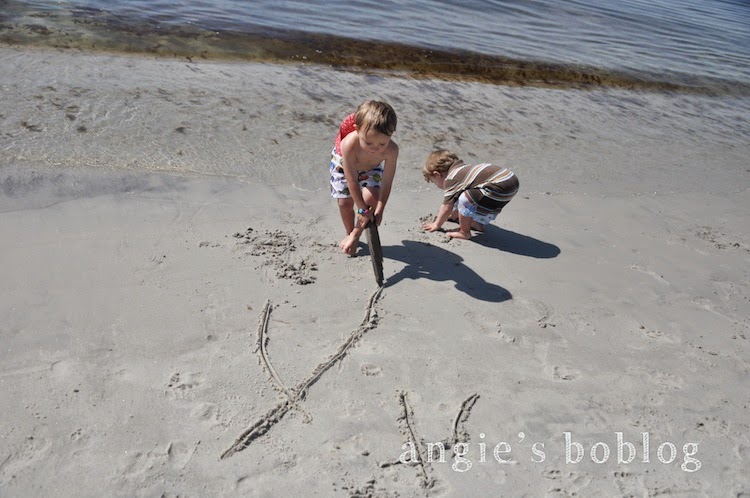 Ben held Maisy and swatted teeny tiny biting flies.  They were awful.  The kiddos somehow didn't get bit or didn't care, but we old people were glad to get going after a quick beach experience. 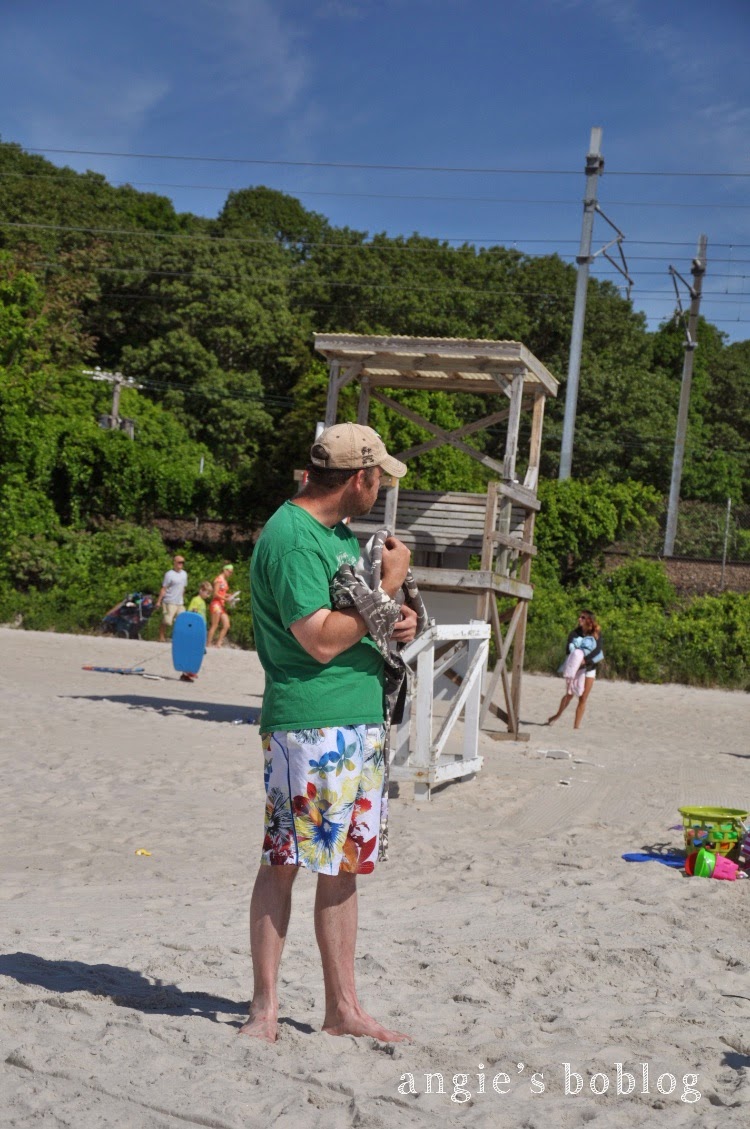 We spent the day at Grandma's hanging out.  Maisy one month and one day old on the couch: 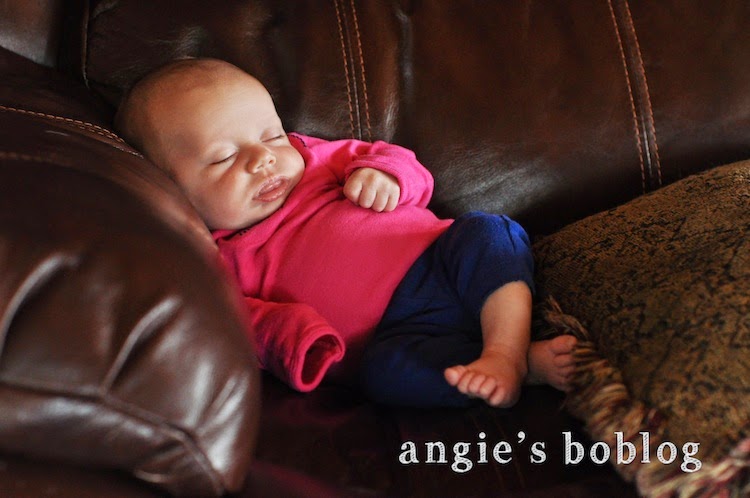 Snack/lunch in the backyard: 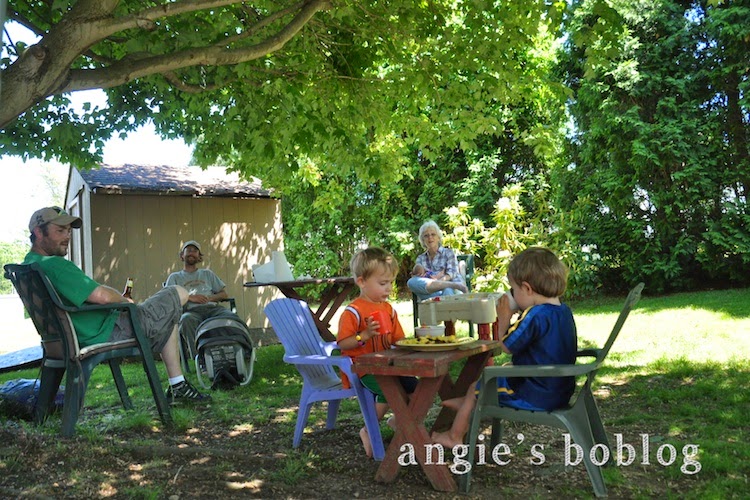 Here's Owen when I teased about taking some of his food, swatting me away and saying, "Don't touch any uz my sood at all." 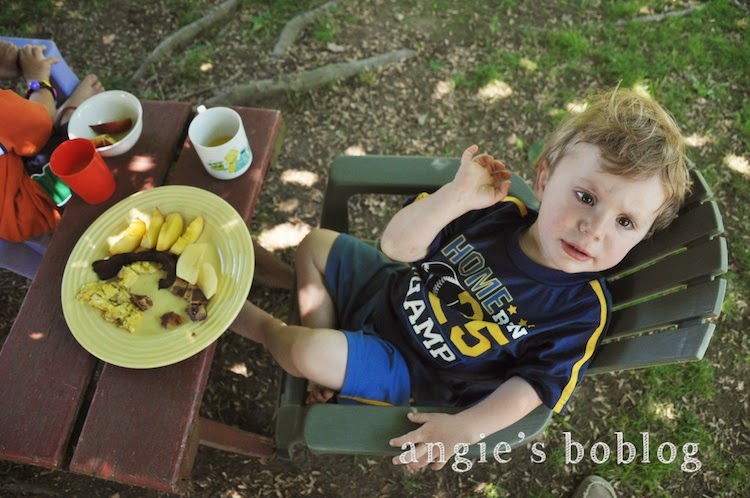 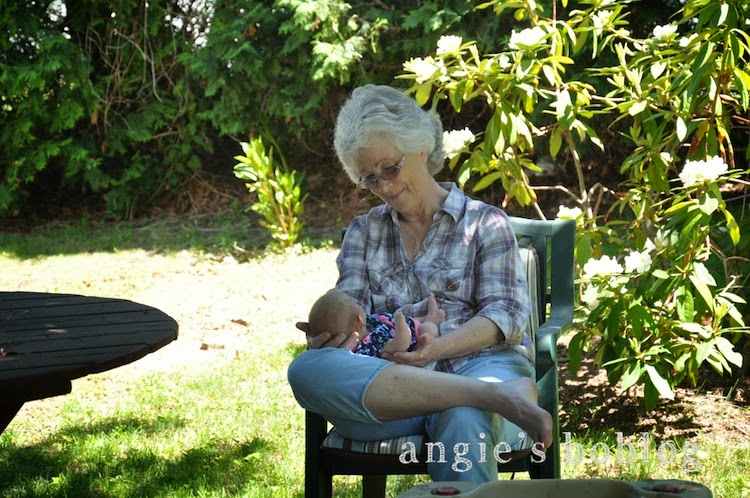 A rare occasion where Bob asked me to take a photo: 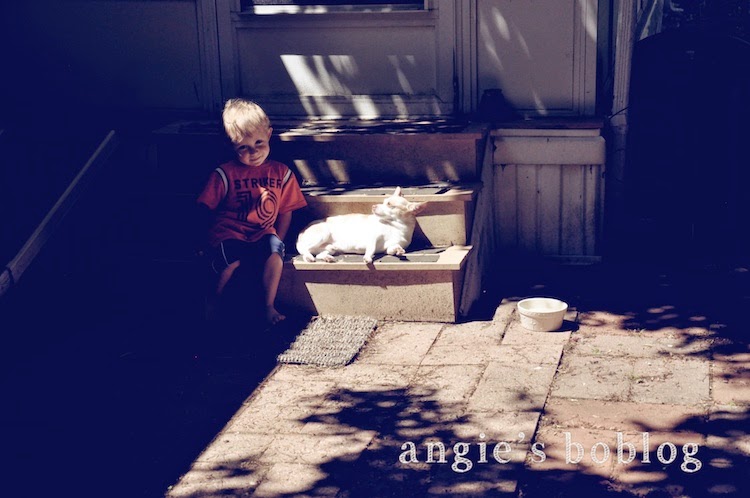 Chillin' and monkeyin' on the hammock: 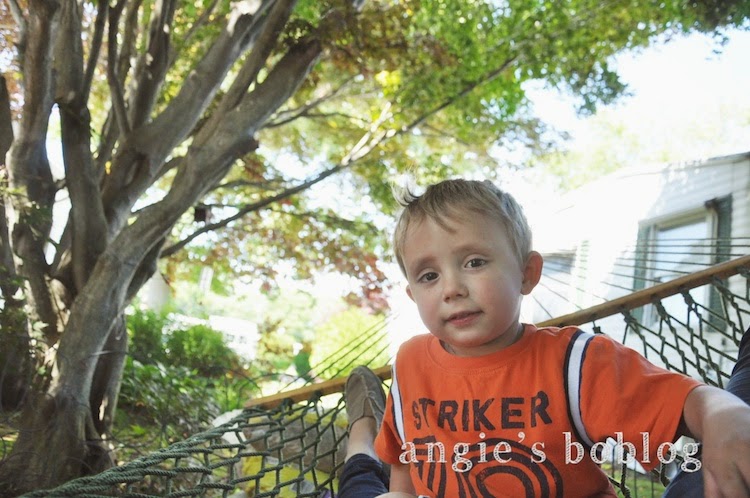 Squish-face kissing my baby girl.  {A note on how inexperienced I am with dressing baby girls: Maisy wore this dress for a couple of hours before I realized there was a diaper cover part attached inside with some plastic thingies I had missed.  Whoops.} 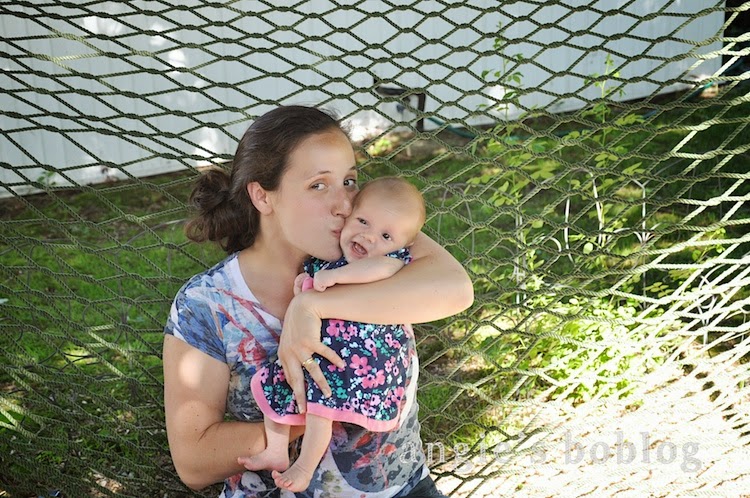 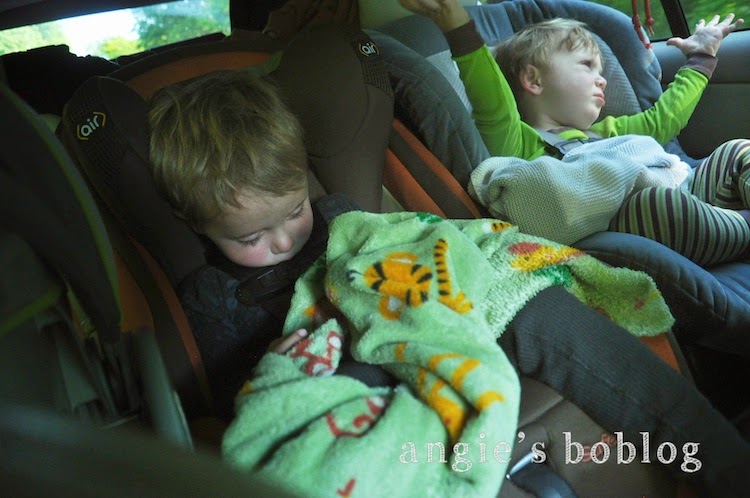 A fun trip.  Car camping with kids: we say, go for it.
Posted by conveyableflow at 6:42 AM