Some random thoughts on Bobby nowadays (because I never want to forget):

1.  I am pretty sure Bobby is a "good baby."  He's my only baby, so really I don't have anything to compare to, but to me he feels easy.  He is normally in a good mood, and when he isn't it's generally easy to tell what he wants or needs to make him happy.  He doesn't cry very often -- he usually provides ample warning in the form of grunting before getting too upset.  We've finally had to leave him with a babysitter for the first time over the past couple of weeks, and he's done very well with it.  He's quite a sweetheart; anyone who watches him is smitten.  (Any volunteers out there?)

2.  Going along with #1, Bobby is a pretty good sleeper, too.  He still needs to eat every four hours or so, with very few exceptions, but he goes right back to sleep after his during-the-night feedings (one sometime between 9:30 PM and my bedtime, and one around 3:30 AM).  When he was a newborn, night feedings took forever (at least an hour, plus the time I spent lying awake in bed listening intently to make sure he was sleeping peacefully again) but now we've got it down to about 20 minutes.  Concerned "experts" have given me suggestions for how to get Bob to sleep through the night, but I know that he's just not ready yet.  He wakes up starving in the night; sometimes I try to give him a pacifier and make him go back to sleep without eating, but he'll just lie there making the most pitiful moaning sound (basically the sound I would make when I am super hungry if doing so would beckon a meal for me) until finally he breaks down and starts screaming.  He usually goes to bed between 8:00 and 8:30 PM, and gets up to eat and play for a while at 7:30 AM.  He always sleeps with his pup (or a replacement on laundry day) partially or completely covering his face.  For months it made me a nervous wreck, but taking it off his face only wakes him up, and he only covers himself back up again -- so if it lets him sleep, I trust God not to let it suffocate him.  When he wakes up he normally just hangs out talking to himself and pooping and chewing on his pup and his sheep for a bit before he gets bored and/or hungry and starts his whining.  Sneaking in to spy on him while he's waking up is pretty much my new favorite thing to do.  (I'll post a video as soon as I figure out how...) 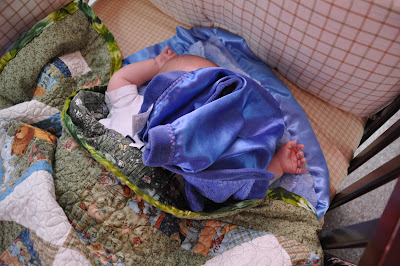 3.  Speaking of favorite things to do, Bobby's new one is drinking water from a cup.  I started giving him cold water because I thought it might help with his teething.  The first time I gave it to him he chomped on the water like a madman, his one tooth clink-clinking on the glass as he chomped.  He swallowed some mouthfuls and choked on others, but he did not want to stop.  Now I let him have some water at least once or twice a day.  His tooth still clinks (actually he now has one and a half teeth), but he is more restrained, and he actually swallows the majority of the water.  He even tries to hold the cup himself.  We're so proud of him.  (Aren't we parents amusing, praising our babies for performing the most basic tasks?)

4.  And speaking of praising babies for their achievements, Bob just yesterday really mastered rolling over from belly to back.  He now goes for it, and usually succeeds, right away.  He's a bit less motivated to roll from back to belly, but he is capable...

5.  Bobby has a goofy little laugh.  Until yesterday I think he has only laughed when he's being tickled.  But last night Ben mocked Bob's laugh, and that made Bob crack up.  I guess that was the first time he actually laughed at something.  He doesn't seem all that serious; I guess he just hasn't quite caught on to the fun of laughter yet.

6.  The boy loves animal noises.  Whenever I want to make him smile for a picture, I just say, "Bobby, what's a monkey say?" and he lights right up.  He does a cute little panting dog impression, too. 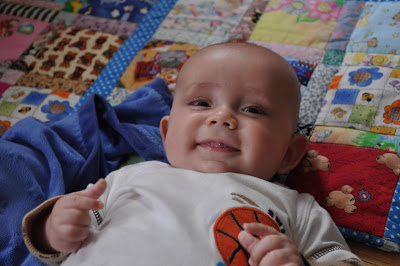 7.  He also for some reason loves this little Jamaica flag we have hanging on a wardrobe mirror in his room.  I tried to take a picture showing him staring at it like he usually does, but instead we both discovered his love for my camera.  He doesn't usually get to be in my arms while I take his picture, so I guess this was a special opportunity for him to get up close and personal with his "third parent."  It was a little tricky to take a low-light photograph of a baby with one hand while holding said baby with the other hand, but I think I ended up with a couple decent ones. 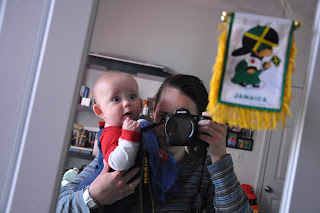 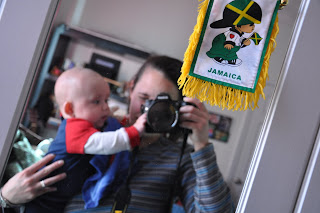 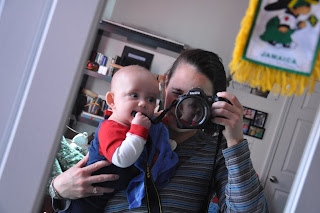 8.  He's a boy after my own heart -- he loves to do "fun" stuff.  He likes to practice standing and to be thrown in the air or tossed on the bed or hung upside-down, and he loves to swing and bounce and just generally do all the most active things that he, as a baby, is allowed to. 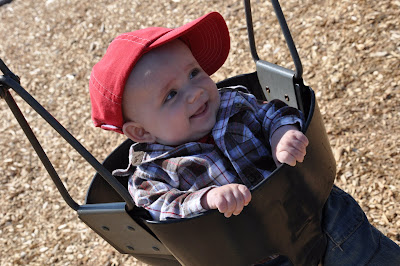 9.  Ok, last one -- Bob prefers nudity to clothing.  He gets very excited when we take his clothes off, and he usually starts whining and/or crying as soon as we start putting clothes back on.  He'll hang out happy as a clam in his diaper, and as soon as you go to put a shirt over his head, he gets super mad.  Good thing summer is coming...
And have I mentioned how much I LOVE this little cutester?  He swells my heart up with joy every time I look at or even think about him.
Posted by conveyableflow at 4:26 PM