The five boys and a baby next door

Actually they're not next door.  They're two houses down.  Five boys and one baby girl, Courtney, who's two months younger than Bob.

Bobby LOVES the neighbor boys, and Courtney too.  I intentionally take him out when I hear them outside because it makes him so happy.  That's what we do -- we take walks to stalk the neighbors and their dogs.  Playing with other people's dogs is so much cheaper than having your own dog.

Three of the boys are little -- 3, 6, and 7, I think -- and I love their interactions with Bob.  They all seem to think Bobby is amazing because A) their baby sister is a girl, but he is a BOY, and B) he's two months older than their baby sister so he can always do more than she can.

A couple of weeks ago before supper we played in front of their house for a while.  I was letting Bobby stand against this rock on the steep hill, pretending with the boys that he was going to climb the mountain.  He sure did try, and he looked like he just might.  They were all super impressed that he could stand.  They could hardly believe it.  "I have never seen a baby STAND before!"  When one of the boys looked away I moved Bob up on top of the rock, and when he looked back he couldn't believe his eyes: "Wow, he climbed up there!?  Let me see him do it!"

Some of my other favorite quotes:

"Boooooooooooob!" (ok that looks like "boob" but it was supposed to be pronounced "bob" in a kid yell from a boy who's running down the hill toward us)

"Come on, Bob, we gotta put the tractor in the shed."

That was Ty, who loves to give Bob rides on all his toys. 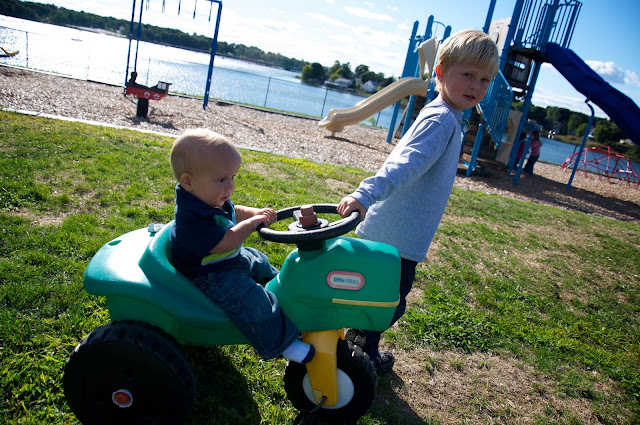 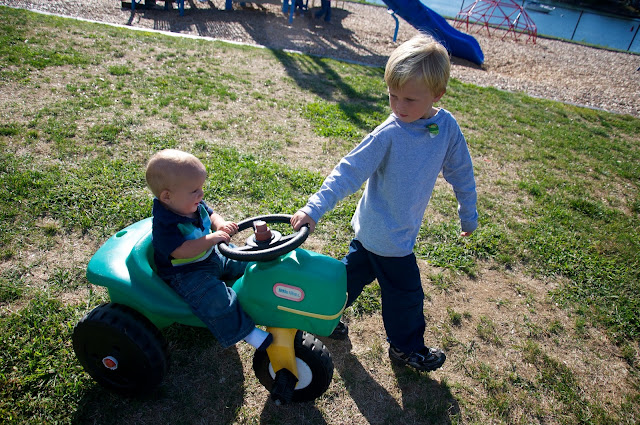 Also, one of them referred to a set of hedge clippers as "giant tweezers."

One thing is clear: life with my boy is going to get more and more fun as we go.
Posted by conveyableflow at 12:12 AM