It's hard to get started on this.   I can't find the opening sentence that captures my feeling right now.  The house is quiet; Bob is still sleeping at 10:20 am (he awoke suddenly crying this morning at 5:45 -- maybe a nightmare -- and wanted to come snuggle in my bed; he lay there quietly nuzzling into me, touching my hair and my cheek, not letting even a sliver of space come between our bodies, for twenty minutes, and then he sat up suddenly and said, "oh, shushie wushie," abandoned his blankie and sucker, and climbed down off the bed.  his good mood ended abruptly, however, when he thought ben's jacket zipper was change jingling in the pocket and decided he needed more money for his piggy bank -- newly inherited from gram -- but dad wouldn't give it to him.  so i settled him back into his crib, and ben left for work, and i went back to sleep.  i woke with a start at 8:30 after a very disturbing vision of my boy being catapulted through the sky, and my legs just not working fast enough to get me there in time to catch him.  just a dream, i told myself; but my heart pounded and ached just the same.  two hours later; i now hear him waking up.  must go hug his tiny body.


went into his room and the first thing he said was, "but i want to go on a treasure hunt.  i really want to do that right now!"  i grabbed him up but had to swoop him back down to grab his piggy, who was also to go on the hunt...


i think earlier that stream of consciousness was going somewhere... but now it's hours later; liza's gone and ben's home but outside at the moment and bob's naptime is coming to an end; and maybe i should just get to the point because if i don't now, will i ever? ...

and now it's hours later yet again -- 10 pm -- the boys are asleep and i am sitting here by the christmas tree in front of my imac with a mulled cider candle to my left.  too much?  yes.  but i just can't stop and get to the point because... whatever, just do it. 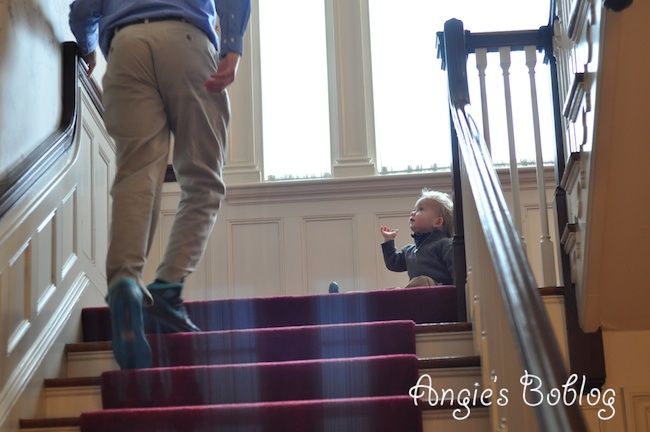 Bob had a grand time at the funeral home for the viewing hour before the graveside service.  which was a little surprising because the past couple wakes we've been to he cried pretty much from the moment we walked in the door.

I gave Gram's eulogy at her graveside last Thursday. 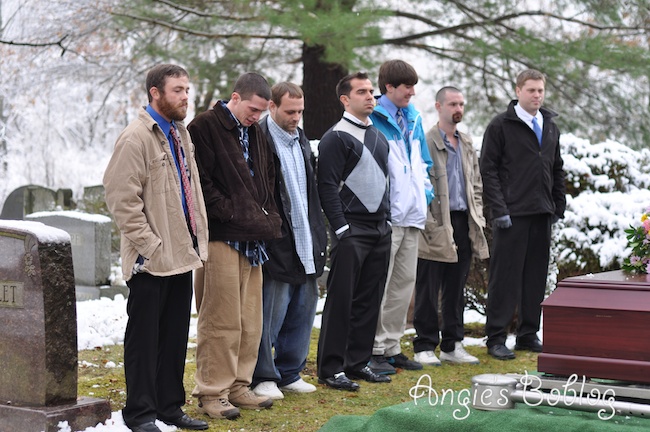 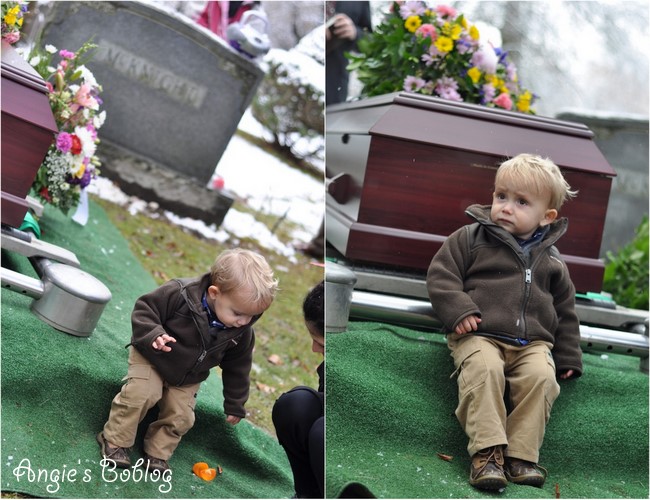 while everyone was assembling bob came this " close to falling into the grave.  but he recovered and found himself the perfect front row seat.

Over the years I've written down some of the things Gram has said to me.  I shared three.

You're only young for a few minutes.  Most of your life is old, it seems.

I tried to tell the youngsters -- and everyone who still feels the least bit young -- to cherish their youth; to take it from Gram, who lived 90 years and knew how short that time really is.

Then I told about a moose that was wandering around Richmond some years ago; he had his picture in the paper several days in a row; he seemed to be lost or something.  Gram was very concerned about the moose; she cut out the articles and showed them to everyone.  About the third day or so she said to me, and I never forgot,

It must be awful lonesome being the only moose around.

Gram felt for people, and for moose i suppose, who had lost their way.  She knew how lonely they were.  She was a fountain of sympathy and empathy for everyone.  In her final years, she was very much like the moose, the only one of her peers left, lonesome and lost in a world of younger generations.  But she always thought of others first.

The third quote I shared was from a day I had taken Gram to the cemeteries to plant flowers.  On the drive home we were quiet, but finally Gram broke the silence with one of the most open and honest things she ever said to me:

They say time heals all, but they are wrong.  It gets harder every day.

She was speaking mainly of losing Pop I think, but also I'm sure of all the others she's had to say goodbye to.  In a way, that truth from Gram is hard to swallow; we want to believe that after some period of time we will "get over" our loss.  But the other side of it is this: we can be happy for Gram, because finally, after seventeen years of living without him, Gram has been reunited with her life's companion and come face to face with Jesus.  She will never be lonely again.

Finally I shared the following, because in hard times it's been of great inspiration to me.


You must not be frightened when a sadness arises within you of such magnitude as you have never experienced, or when a restlessness overshadows all you do, like light and the shadow of clouds gliding over your hand.  You must believe that something is happening to you, that life has not forgotten you, that it holds you in its hand.  It shall not let you fall.


Why should you want to exclude any anxiety, any grief, any melancholy from your life, since you do not know what it is that these conditions are accomplishing in you?

Rainer Maria Rilke, in Letters to a Young Poet 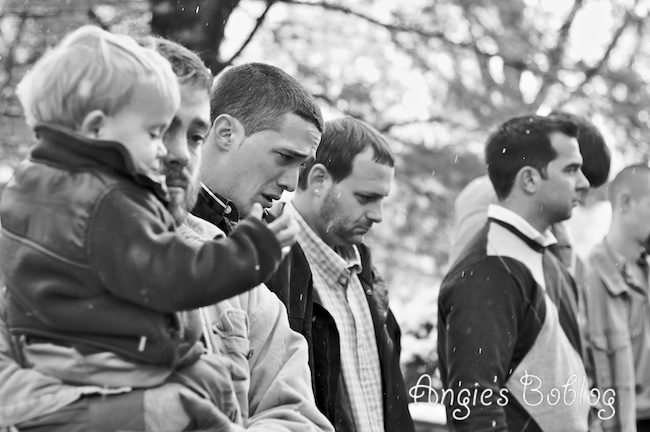 Somewhere near the end there Bob struggled free from Ben's arms and came over to me saying in his teeny voice, "Are you otay, Mom?  Are you otay?"  He must have asked me that twenty times or more in the days leading up to the funeral; he inherited Gram's empathy I think.  Several people commented to me afterwards how touching and beautiful it was; he is a touchingly beautiful boy, I must admit.


The following quote by Stephen Grellet (a Quaker missionary) that Gram's had hanging on her living room wall forever served as the benediction and I'll let it do the same here:


I shall pass through this world but once.  If, therefore, there be any kindness I can show or any good I can do, let me do it now.  Let me not defer it nor neglect it, for I shall not pass this way again.
Posted by conveyableflow at 11:13 PM