The day before Bobby's actual birthday, we had the traditional Sunday birthday party at Gram's.

That morning, since he was practically a one-year-old, I gave Bob some extra-peanut-buttery peanut butter crackers, which he thoroughly enjoyed.  (I've been feeding Bob peanuts since he was about 10 months old, because I'm quite sure the experts are going back on that business about allergies, and I never really bought it anyway.)  I couldn't possibly choose just one picture to share. 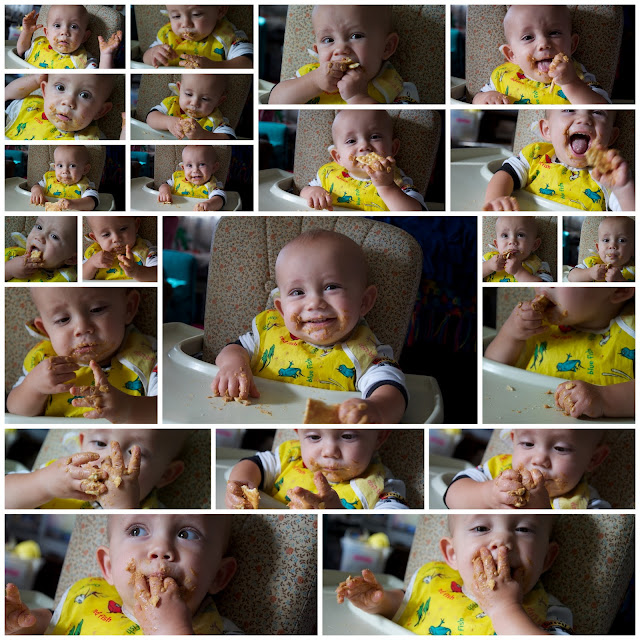 Bobby got some really great gifts at his little party, including...

...a singing bouncy turtle from Uncle James.  It's like having a new really friendly friend in the house.  Bob loves it. 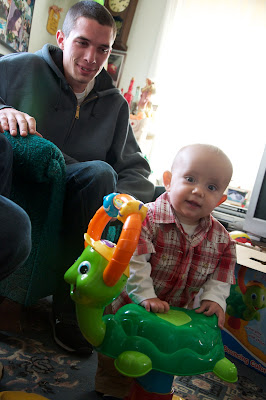 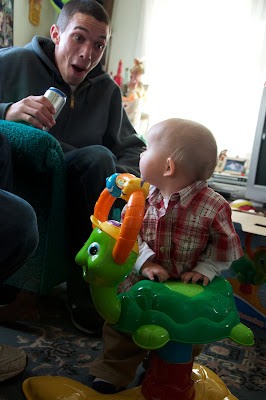 ...a singing firetruck from Pepe.  Actually I guess it's not the truck that's singing, but rather what appears to be the firegirl.  "Are you ready, Smoky?"  (Smoky is the dog.)  Bobby loved one of its songs so much that he played it over and over again for days.  He also loves when we whip him around the house like he's on his way to save some lives. 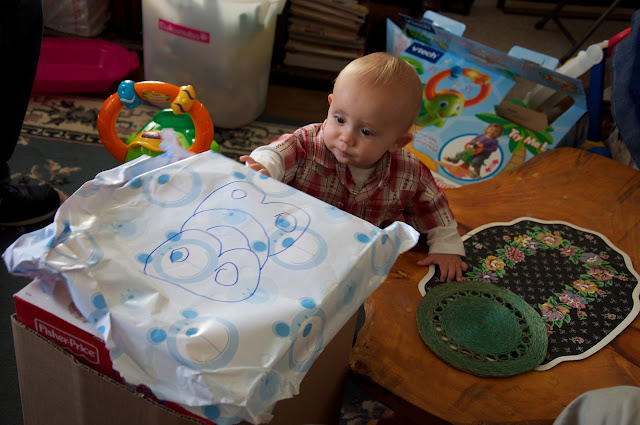 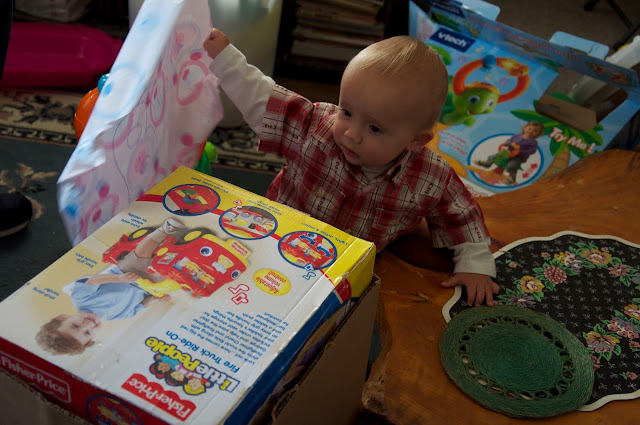 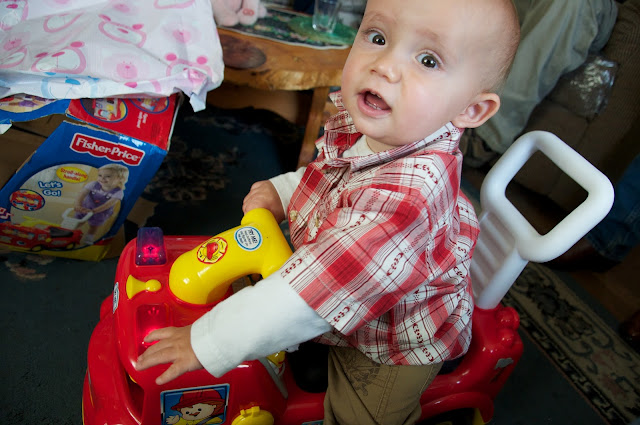 ...some really wonderful books and new pj's from Grandmother.  I'll have to add another photo of the books because they are all so great. 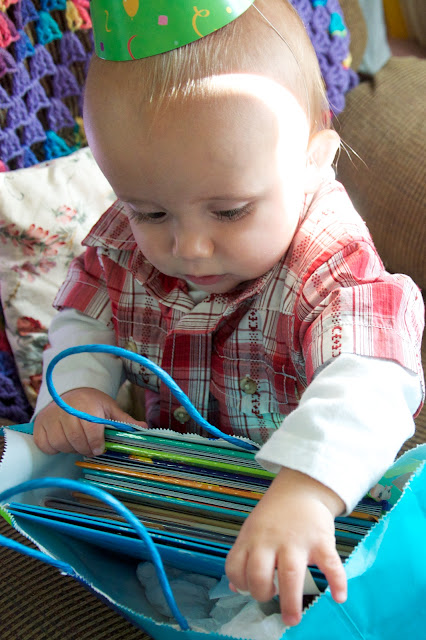 ...lots of new stuffed animals and other goodies from Uncle Dave, Auntie Crystal, Chloe and Mason. 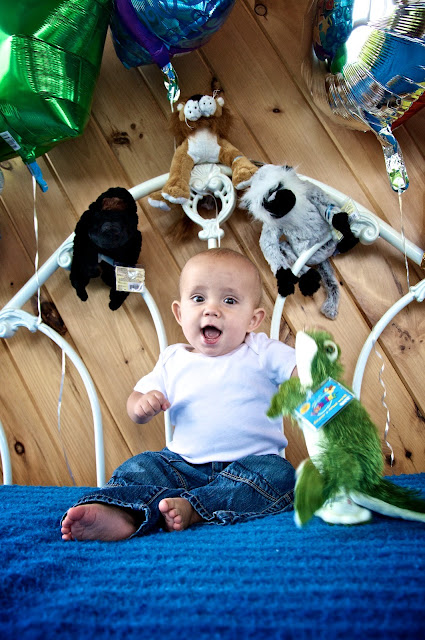 Bob's favorite thing of all was when his cousin Bailey showed up at the party.  As soon as he saw her he dumped himself off the firetruck, crawled over saying "hi, hi, " in his sweet little voice, and climbed up her legs to give her a hug.  Bobby is such a little sweetheart I can't even stand it. 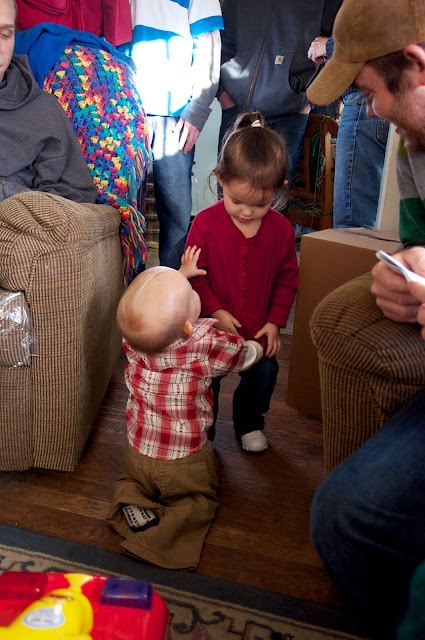 Ben baked Bobby a funfetti cake and I expertly decorated it with frosting and peanut m&m's. 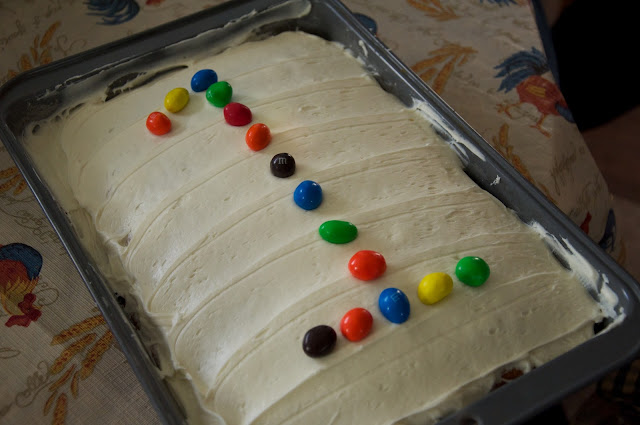 Bobby was not a fan of the cake.  This is his face right after he had his first taste of the frosting: 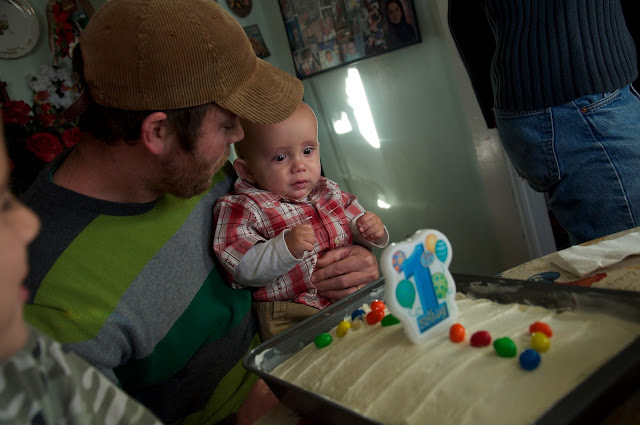 Then I think he got mad at Mason for making fun of him: 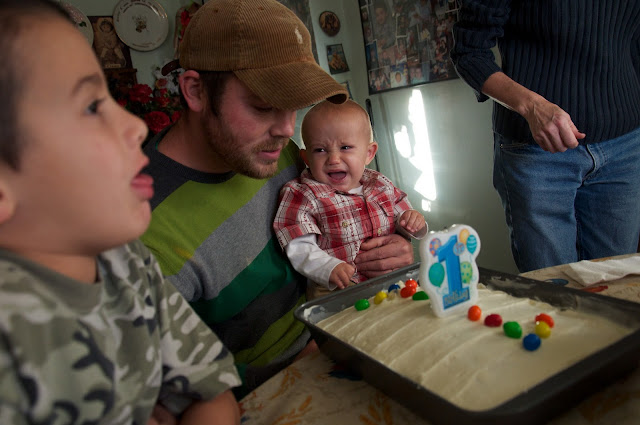 "Get that thing away from me." 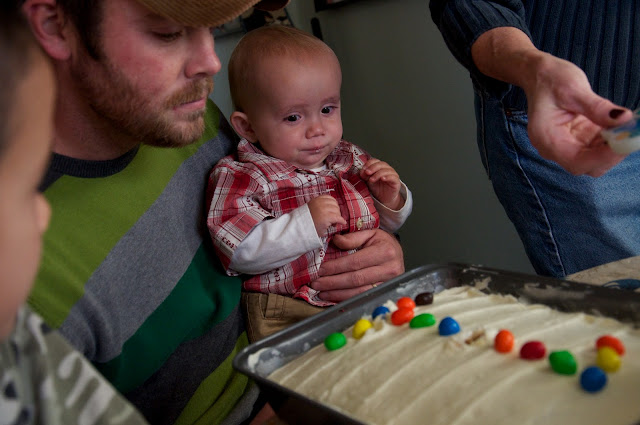 And yet I forced him to sit in front of a piece of that cake-shaped sugar anyway, just so he'd get to.  And so I'd get to take pictures of him. 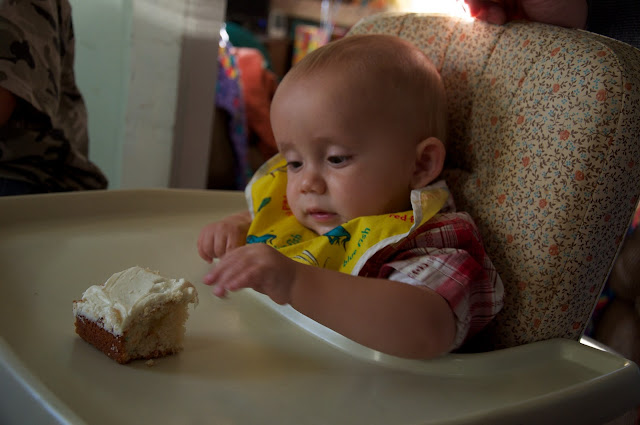 Except that he doesn't eat much sugary food, and this was probably the least healthy item ever placed on his menu... And this is as much as he touched it. 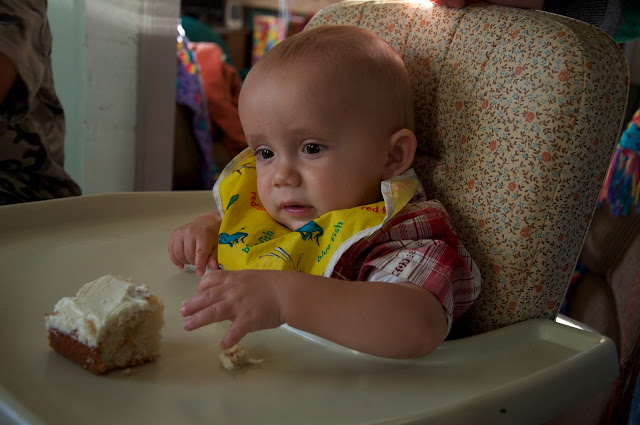 He wanted nothing of it.

This last pic is deceiving because I was the one who cleaned off the frosting and crumbled the cake in my attempts to entice Bob to eat it... Finally he says, "Mom you better get this away from me before it's all over the floor!" 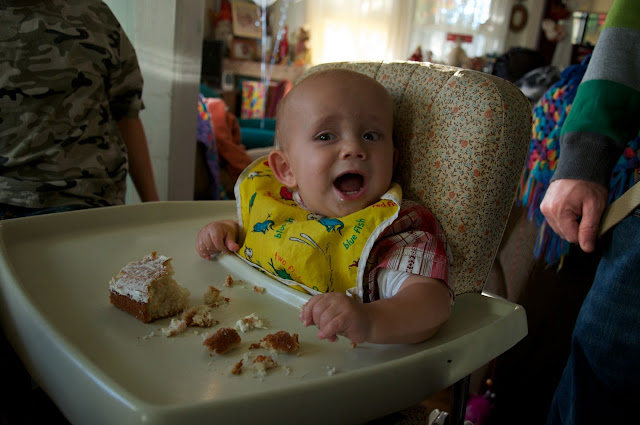 And so we went outside, to enjoy the cold but sunny weather. 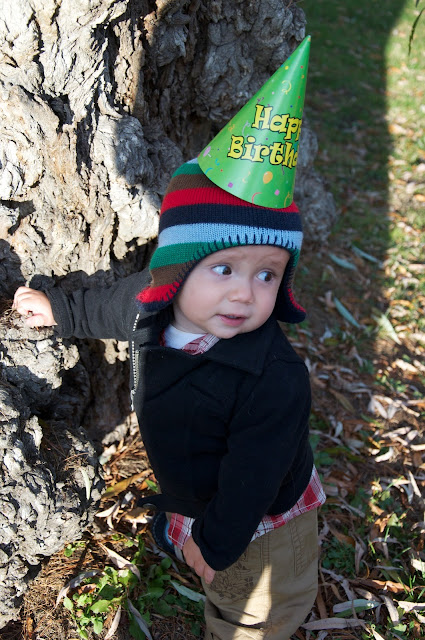 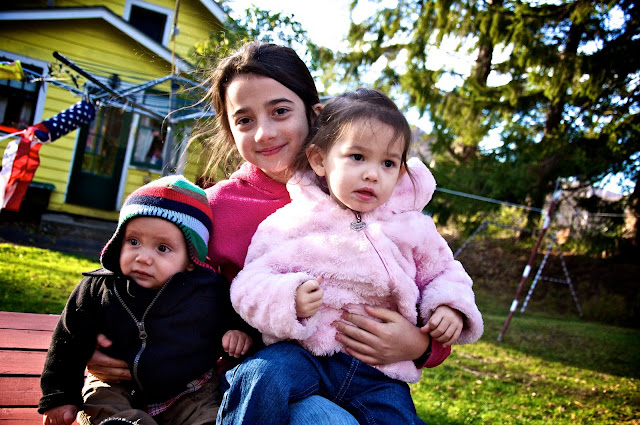 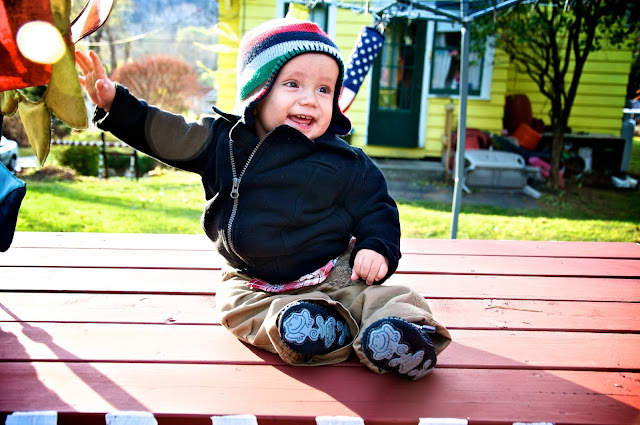 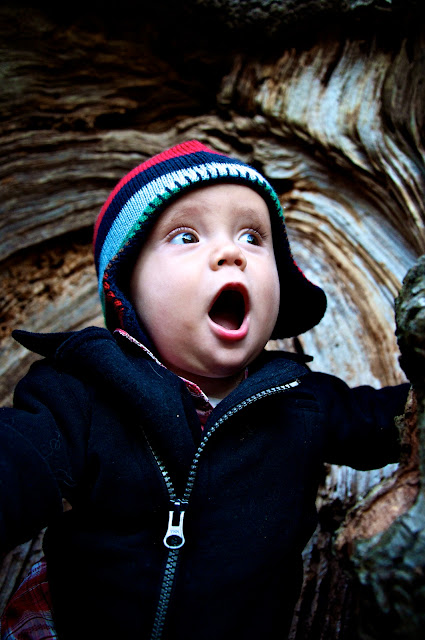 And here's Bob, long overdue for a nap, with Gram (his great-great grandmother!) before our drive back to New York: 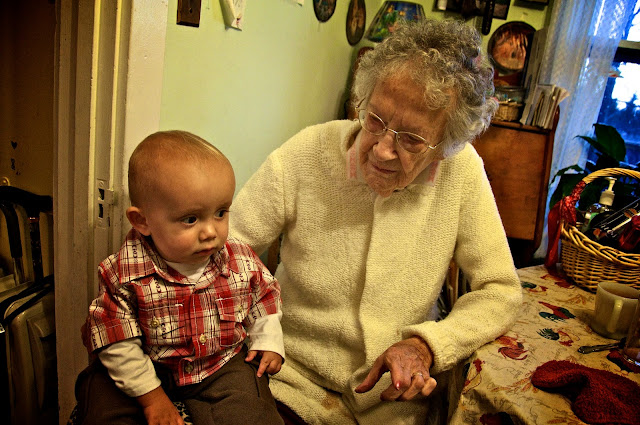 Part two of Bobby's first birthday stuff (yikes, this was two weeks ago now): tomorrow.
Posted by conveyableflow at 11:59 PM