Bob's first Halloween and thoughts about boycotting the devil's holiday 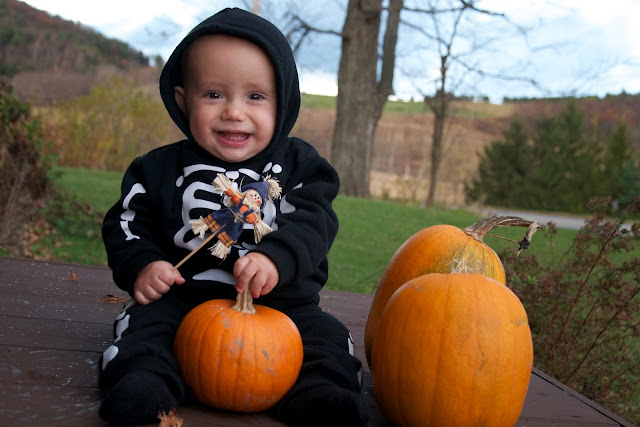 Growing up, I wasn't allowed to celebrate Halloween at all.  And I guess I see my mother's point: Halloween at its roots is not a thing to be celebrated.  While all the other kids were carving their pumpkins and enjoying their trick-or-treat candy, I was explaining that I don't do those things because Halloween is the Devil's holiday and I'm a Christian.  But I'm pretty sure that never made another kid think, "gee, I want to be a Christian too."  It was more like, "gee, that sucks."  I have a vague memory of trick-or-treating as a toddler; I think my dad dressed me up as a ghost, but I could be making this up.  And one year, when I was about ten, I decided at the last minute to dress up and go out with my little brother and our next-door neighbors, with whom James went every year.  You see, I wasn't exactly forbidden from going trick-or-treating, I was merely very strongly discouraged.  For some reason, this rule did not apply to my younger brother (like many others).  One other year, when I was in fourth grade, I decided to just dress up and pass out candy to the other kids, because this seemed acceptable to my mother.  I dressed as a black cat, complete with leotard and tights, tail, ears, and painted-on nose and whiskers.  I turned on the porch light and I waited and waited for the trick-or-treaters to arrive.  None did.  Finally, when the allotted time for candy collecting was almost up, my mom said that I'd better practice my trombone (30 minutes per day was the requirement).  And so I did, and the mouthpiece messed up my makeup before a single kid had seen my costume, and I cried in my room because I was so mad at my mother for making me feel guilty about wanting free candy.  When my brother and the neighbors returned from their fun, they said, "Why isn't the porch light on?"  It was like a dagger to the heart and I think I cried again after that.  I was sure my mother had turned the light off to sabotage me.  Well apparently I never really got over the trick-or-treat ban.  Perhaps the worst part was the double standard set for my brother and me.  (To James's credit, he usually gave me all of his Reese's peanut butter cups.) 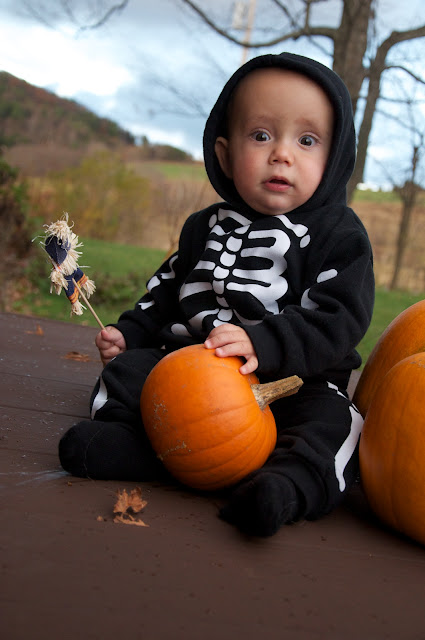 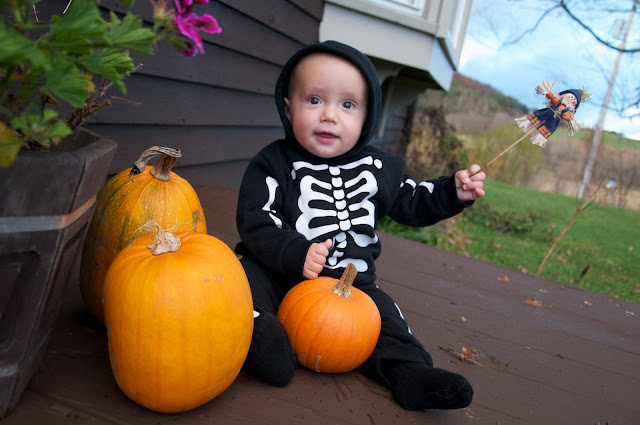 Anyway, perhaps to make up for my childhood deprivation, I took Bobby trick-or-treating this year, despite the fact that he can't walk and can't have candy.  Ben was a bit skeptical of my plan, but he ended up being glad we did it.  A couple people probably thought we were weirdos and/or taking advantage of the system by taking our baby around to collect candy, but most of them just thought Bob was the most adorable skeleton they'd ever seen.  (I normally wouldn't choose a skeleton costume, but I'm not very creative and I am rather cheap and I found this sweat suit on clearance for $5 and figured I couldn't beat that.) 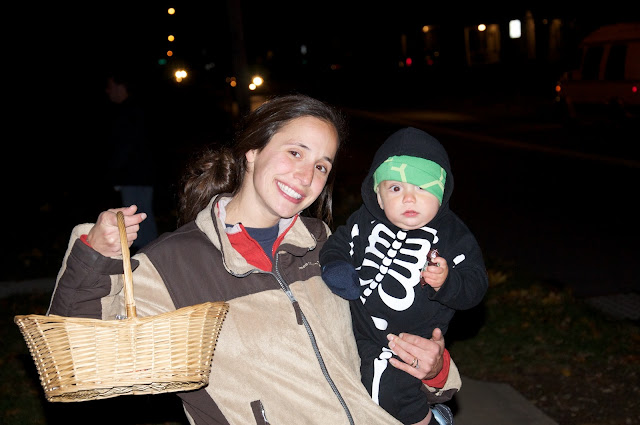 Now, I'm not saying that I'm totally into all the Halloween nonsense, goblins and ghosts and making a huge deal of it all, but when the end of October rolls around and it's freezing out and we all need something fun to lift our spirits, I really don't see the harm in carving pumpkins and putting on a goofy outfit and parading around the neighborhood hoping for lots of name brand chocolate candy and very few tootsie pops.  If, after being presented with all the facts, Bob wishes to boycott Halloween completely, then good for him, but I certainly won't guilt him into it. 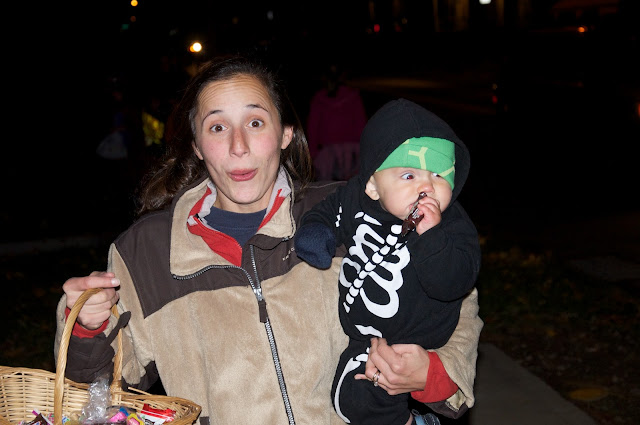 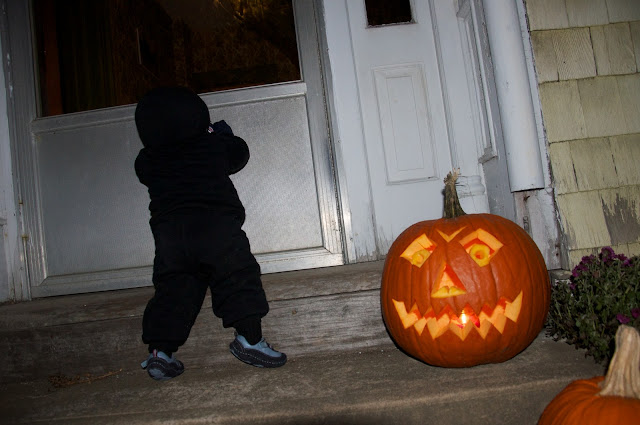 (knocking on a door with a fun size 3 Musketeers bar)
P.S.  I'm certainly not trying to be harsh on my mom here.  In case it comes off that way, click here to read my Mother's Day post where I'm all mushy and nice.  Cause I sure do love her. 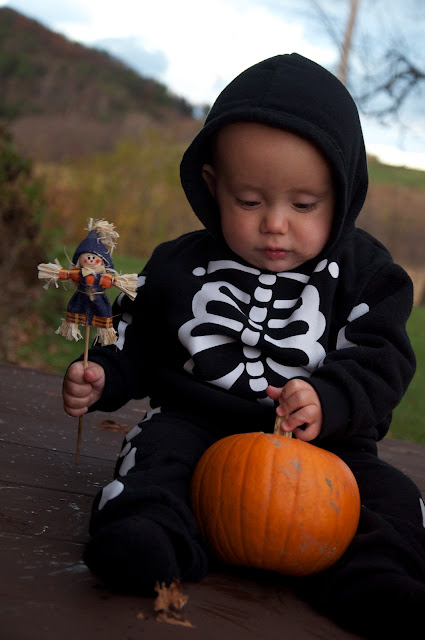 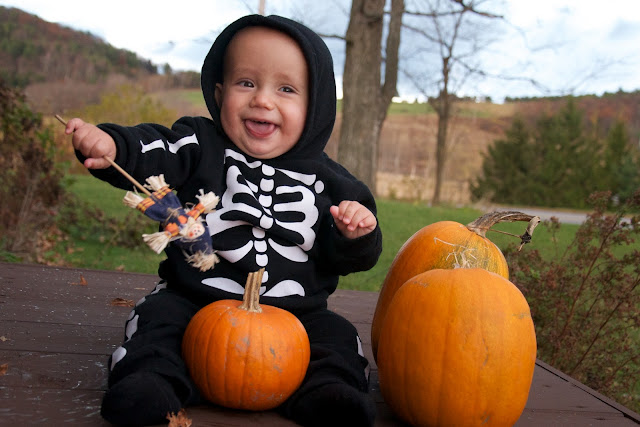 Posted by conveyableflow at 8:44 PM

Email ThisBlogThis!Share to TwitterShare to FacebookShare to Pinterest
Labels: holidays, looking back, Robert