Today on our drive from NY to CT we struck a bird flying across the highway.  It hit the Jeep's antenna and bounced off the windshield.  I saw it coming and screamed but it was too late; there was nothing we could do.  (Ben is disputing this recollection of the incident but I'm pretty sure my memory is better than his.)  Jeep has never struck and killed an animal before (at least not while I was in the car); it was traumatic for both of us.  Ben laughed.  Honestly I laughed too mostly because the antenna looked ridiculous and to keep myself from throwing up.  What was that bird thinking flying over I-90?  "Probably he just wanted to fly into our car to spread his Christmas cheer." 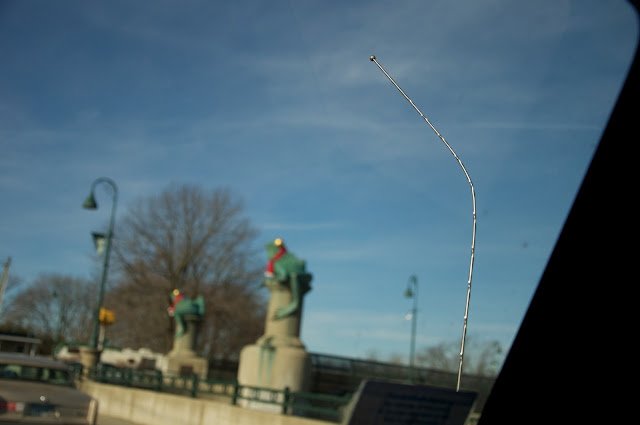 Bob picked up his first proper name today.  Ben's brother was ordering a pizza on the phone and gave his name; Bob repeated it perfectly, then said it over and over: "Matt, Matt, Matt."  When Matt walks into the room, "Matt."  Bobby found a picture of Matt on the wall and keeps walking over to it and pointing and saying "Matt." 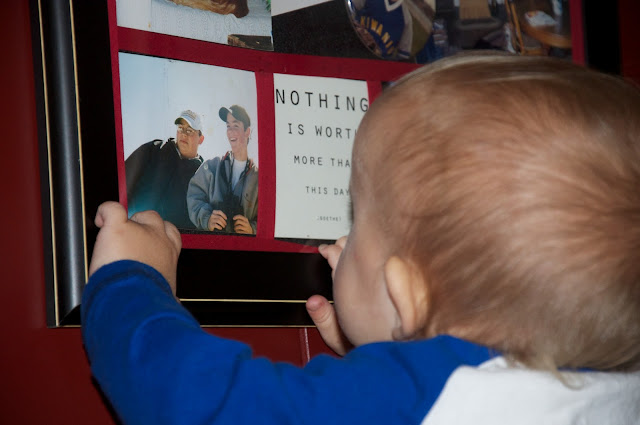 Maybe just maybe this regular use of an "m" word will encourage Bob to say "mom."

Also, he walked 20 steps or so all the way across Grandma Arpie's kitchen tonight.  I guess that officially makes him a walker.

Drove from Ben's mom's in CT to Tiny Gram's near Sturbridge and then to the Berkshires.  We continued the Christmas tradition we started last year.  Being the statistician that I am, I wondered which was the most commonly played Christmas song; henceforth was invented our game of listening to Christmas music on the radio in the car and keeping a tally of the songs we hear on the backs of Google map printouts.  I guess that's not the game part; the game part is guessing which song will come on next and keeping track of points when we guess right.

Went to the Christmas Eve service at New Life.  Fun to see some of my church family that I haven't seen in a while... and the Christmas band is much improved compared to the past couple of years!

A fun long crazy day up at Gram's with the fam.  Phew.

Last night I watched the Sound of Music for the first time ever; it was on TV.  I guess it never came on during the Disney channel free trial when I was a kid.  Ohmygosh I loved it.  I missed a few parts while getting Bob and Gram ready for bed... perhaps my Netflix manager will add it to the queue so we can watch the whole thing.


Got home last night and had our own little family pretend Christmas today.  Bobby loved his house and his new toys.  We tested out our new snowshoes.  I baked some peanut butter cookies and Ben built a fire.

PS.  I won the Christmas song game this year.  We heard lots of absurdly obscure songs; final score was 2-0.  Care to guess what was most commonly played?

Now to import the photos...
Posted by conveyableflow at 11:13 PM