Just watched this week's episode of Parenthood on Hulu while the pups were both napping.  (yes! success!)  Parenthood is my show these days -- meaning that's the show I watch without Ben.  Which is probably for the best because I cry pretty much every time.  Sometimes, like today, I cry through just about the whole thing.  Alone, I can just let my mom-otions (that's a word I just made up that refers to those uncontrollable emotions you're sure to suffer without warning beginning the instant you give birth) run free.  It's cleansing I think.

Together, Ben and I watch the sitcoms.  Best lines from last week's episodes...

"There are no bad ideas, just great ideas that go horribly wrong."  --Jack Donaghy on 30 Rock

And the bits of "Phil's-osophy" on Modern Family?  Classic...

"always look people in the eye. even if they're blind.  just say, 'i'm looking you in the eye.'  or, if you get pulled over, just say your spouse has diarrhea."

"the most amazing things that can happen to a human being will happen to you if you just lower your expectations."

"dance until you feet hurt, sing until your lungs hurt, act until you're william hurt."

"marry someone who looks sexy while disappointed."

"when life gives you lemonade, make lemons.  life will be all like, what!?"

Bob and Owen do their own fair share of tv watching too.  Owen's a regular little tv addict.  As soon as he sees a screen turn on he's enraptured.  He'll watch just about anything.  I'm not quite proud of it, but tis just the facts of life these days.

Bob's top picks lately are Fireman Sam, Bob the Builder, Blue's Clues, and Leapfrog Phonics Farm, and at Gram's yesterday he discovered a show called Max and Ruby that he can't stop talking about.  At home we do Netflix and DVD only.  No cable because to me the worst thing about tv for kids (and myself) is the commercials.  My guidelines for what I want the kiddos watching: shows should be educational and the characters in them should be kind and hopefully not too annoying.  Fireman Sam is a bit of an exception maybe since Norman Price is such a little menace, but it's been pup's favorite from the first time he saw it, and it inspires him to rescue all day every day, so it's fine with me. 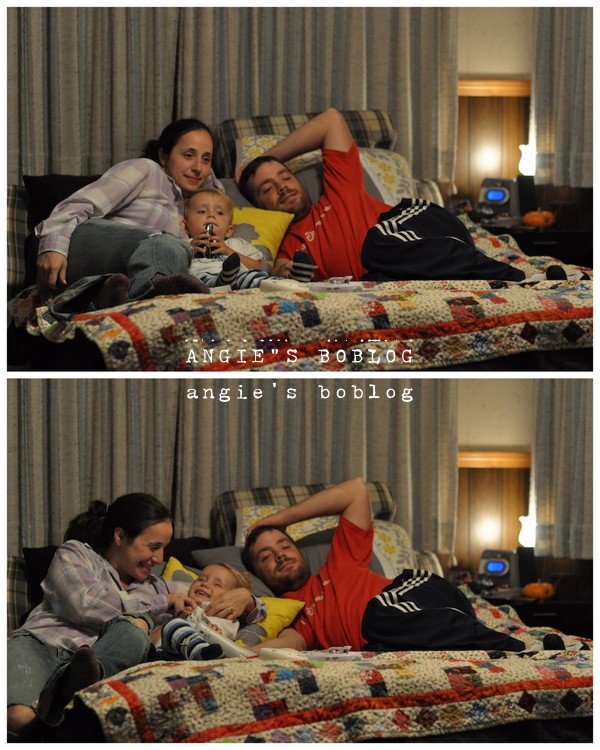 movie night while we were painting our bedroom and camping out in the living room
yes, owie took the photos.  just kidding.

So, any favorites of yours that I'm missing?
Posted by conveyableflow at 3:31 PM