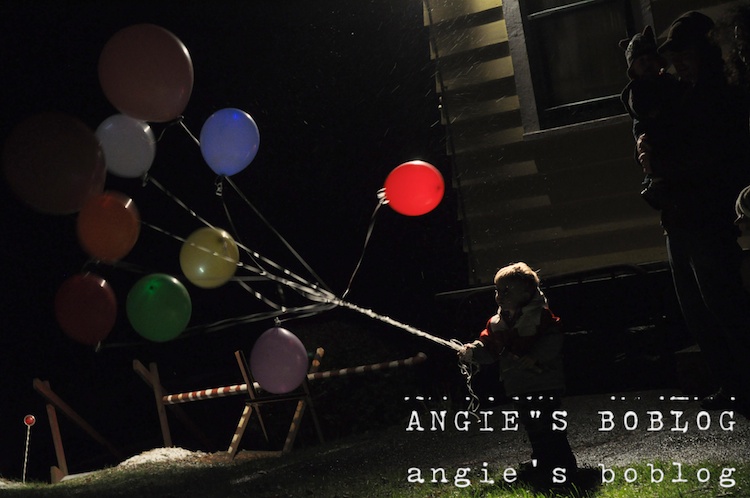 For those of you waiting to hear how the great pacifier flyaway went.... it was a total failure.  Bob was very eager to fly that sucker away, because he was very eager to open his birthday presents.  And fly it away he did, but it was a super windy night and the whole balloon contraption flew about ten yards before it got stuck in the nearest tree.  So instead of flying off to space like we had planned, the sucker just blew in the breeze twenty feet up, teasing poor Bob.  Still, he didn't care.  He hurried inside to unwrap his goods.  Fast forward to bedtime... I had to lay with him until we both went to sleep, but somehow it happened without the pacifier.  And I thought there was hope, until poor Bobbert awoke at 3am and was completely inconsolable.  There was nothing I could do for him.  He was so upset he could barely catch his breath.  So I pulled out an old suckie that had been hiding and gave it to him.  And that's that -- he still uses it (strictly in his bed).  How I wish he'd give it up!  But at the same time I feel just awful forcing him to.  (Plus we're all fighting away a cold; this isn't the time to be sleep deprived.)  I would have been a mess if someone had told me I couldn't suck my thumb to help me sleep when I was three.  So we're back pretty much where we started.  My big plan was a big FAIL.  Oh well.  On to other birthday happenings...

Bobby got up early before Ben left for work and he got to open up a few little presents.  Then we had breakfast and hung around playing for a couple of hours.

I had something to return at Michael's and a 50% off coupon, so we went to browse so Bob could choose something.  After much deliberation he ended up choosing a blue Christmasy mailbox.  It's just about as tall as he is, and watching him carry that thing through the store was priceless (or at least worth the price I paid for the mailbox).

After that we went bowling with Shane and "Shane's mom" -- because that's what my boy wanted to do for his birthday, and I wanted him to have the best day ever.  Obviously. 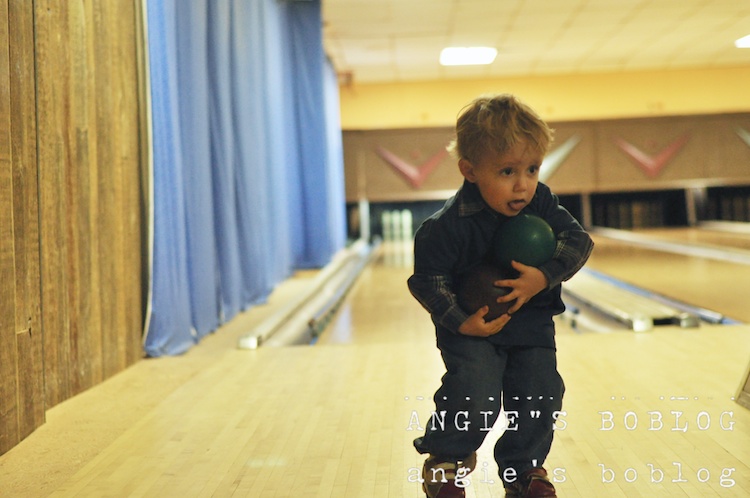 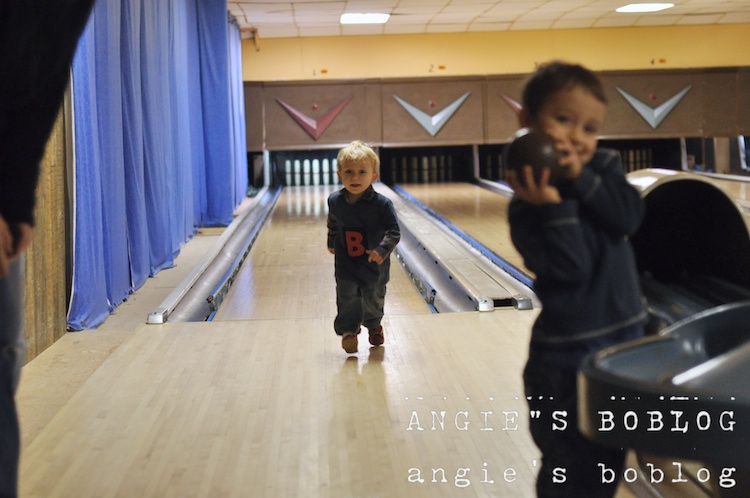 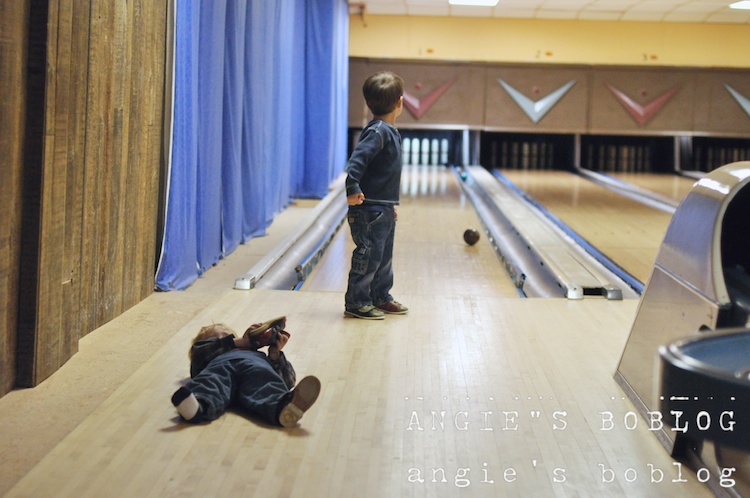 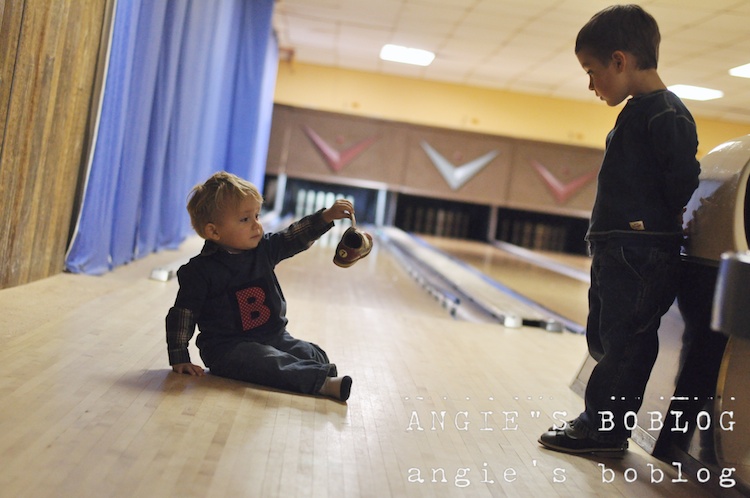 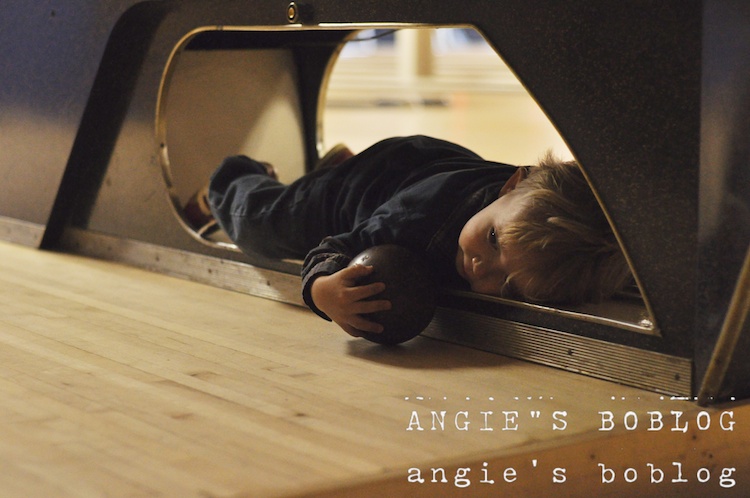 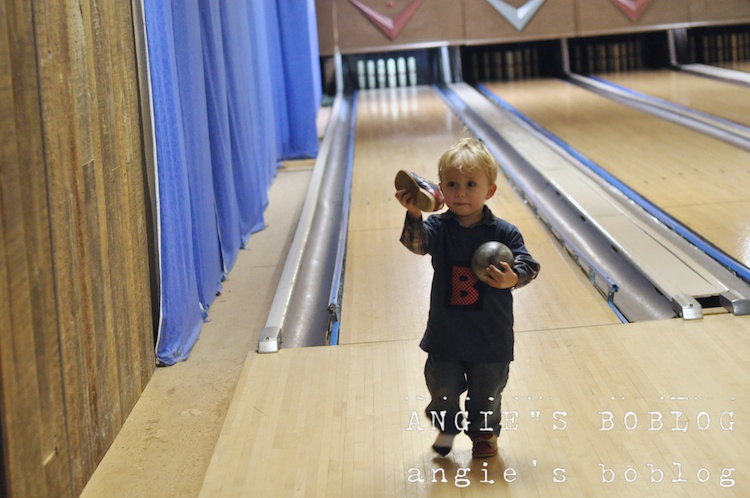 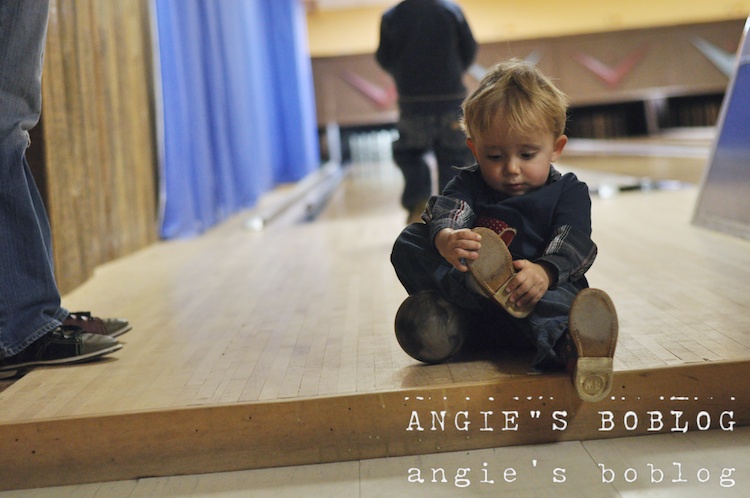 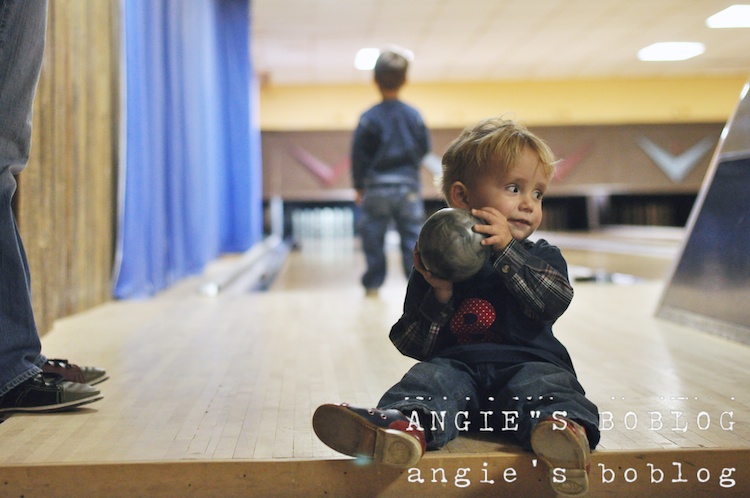 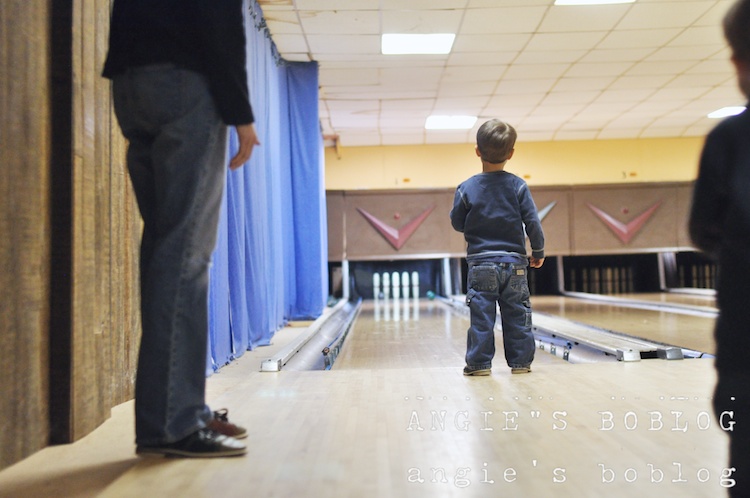 Owie was there, too.  He spent most of the time chewing on my keys. 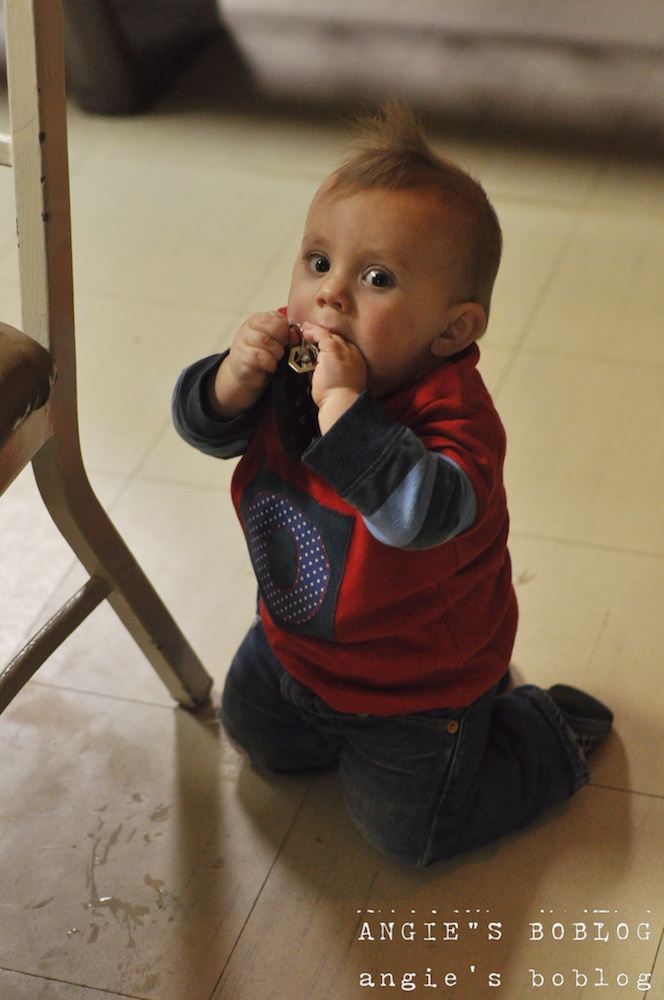 (Thanks for the cute shirts, Aunt Carol!)

We headed home for lunch and naps and went to pick up Dad from work.  And on our way it started snowing.  Bobby was very excited to have the first snow on his birthday, hence for once he was actually excited for a mini photo op. 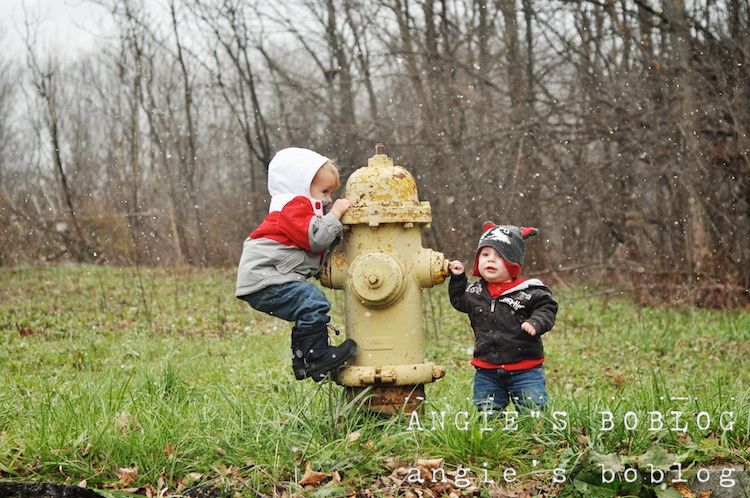 I procrastinated on making Bobby's cake, so I ended up going with the one minute chocolate cake.  Bobbert helped.  (And it took us way more than one minute.) 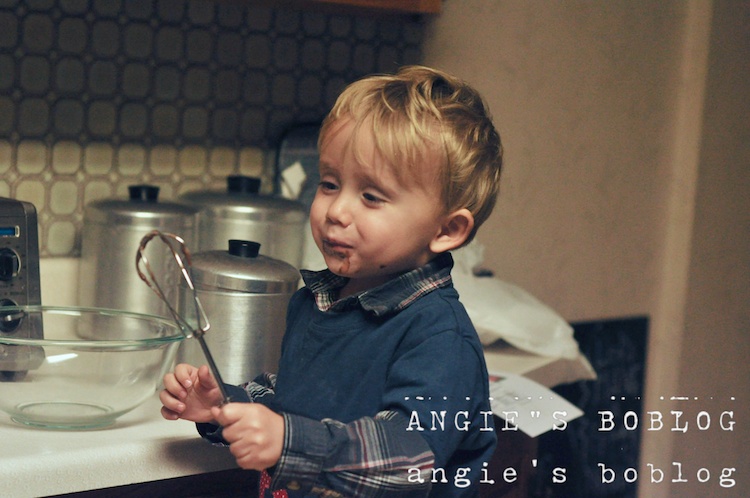 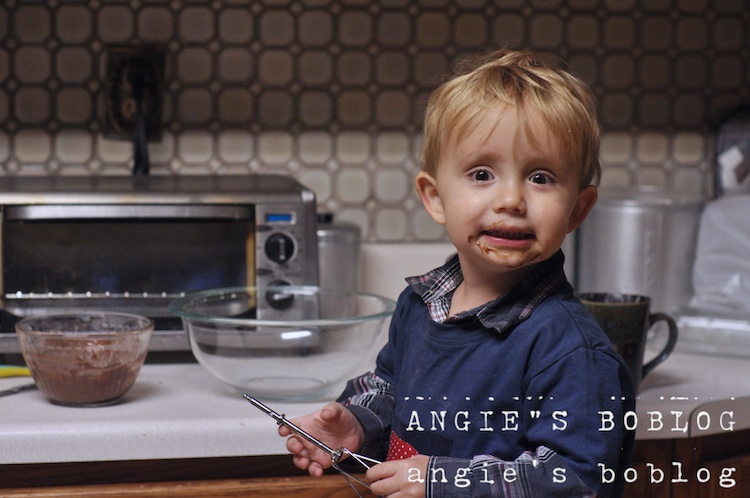 Then we headed up to Gram's for Bob's "party" which he was uber excited about.  (Not a party at all, really, for those of you who weren't invited, which is just about everyone... I didn't want to confuse Bob with "this day is your birthday, but this other day is your birthday party..."  Maybe next year.)

He requested oatmeal for his birthday supper, so that's what we had -- with apples and walnuts and maple syrup and sausages. 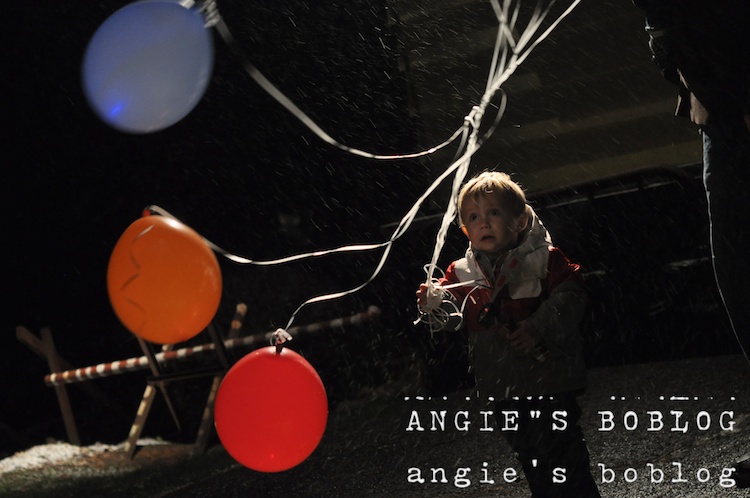 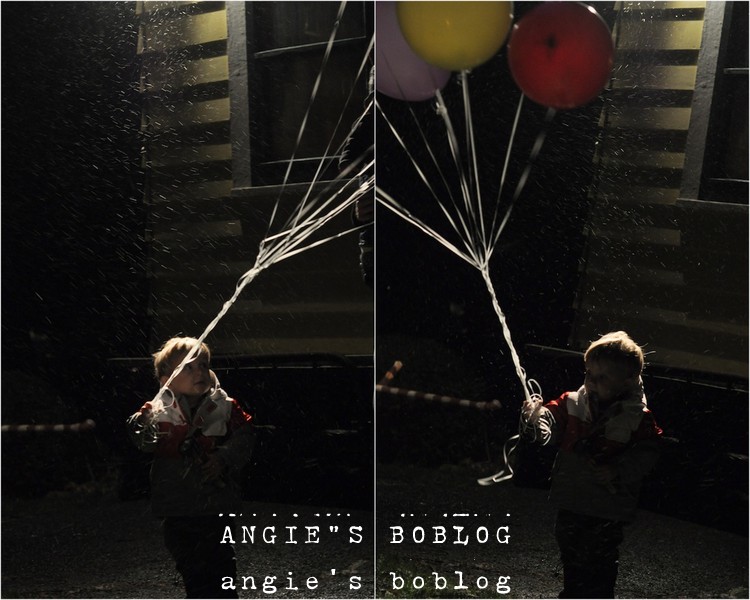 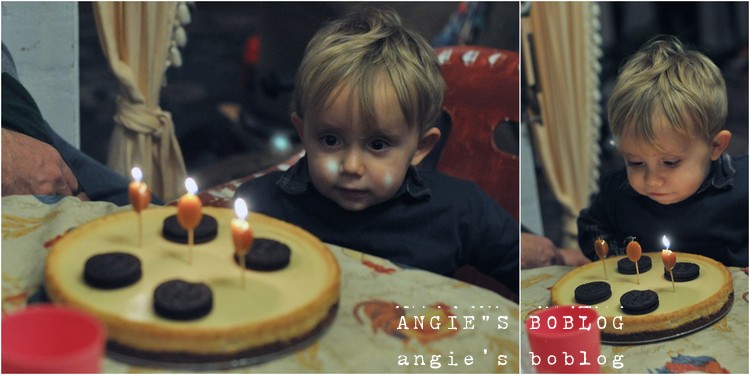 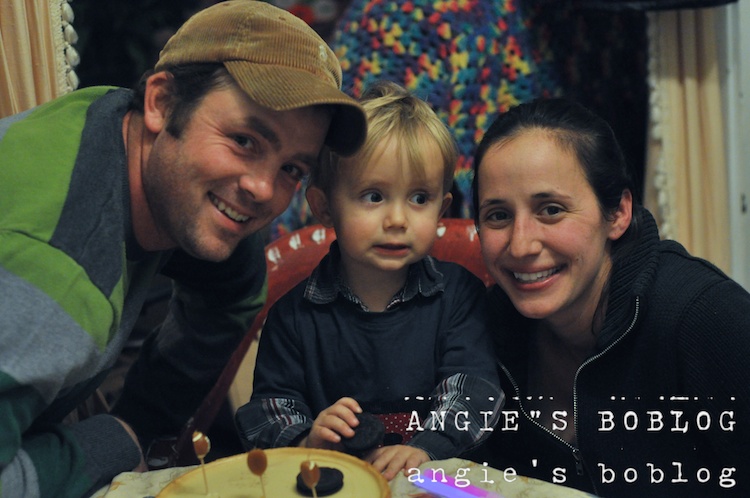 and presents (what he'd been waiting for!)  And yeah, the monster jam bike?  That was a big fail, too.  He loved it, but I couldn't find the saddle height online and it ended up being way too big for my little shrimp.  So it looks like we'll have to send it back and get the Strider after all. 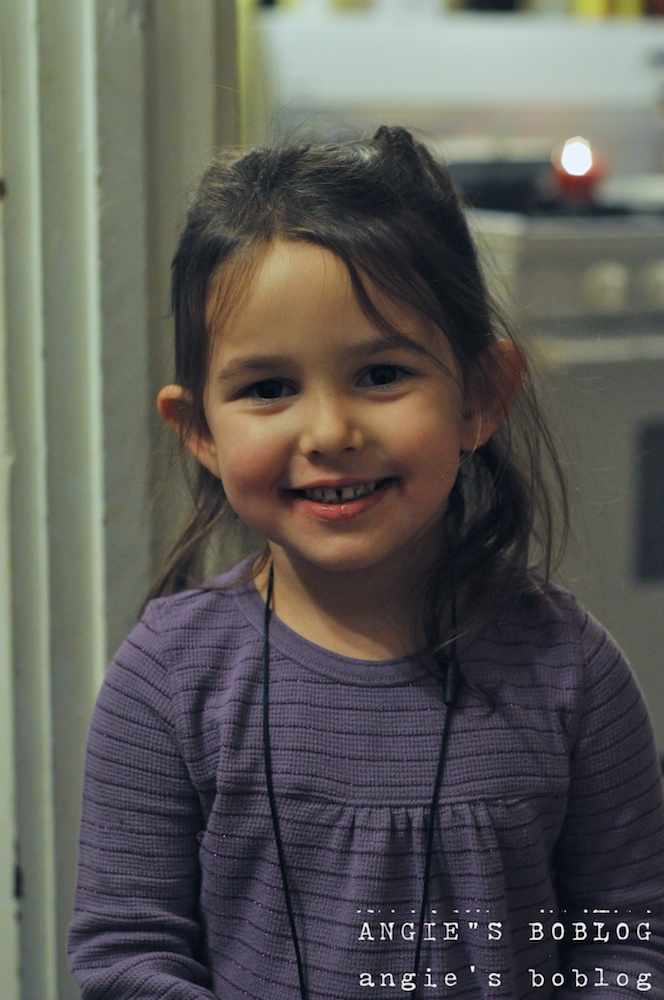 Saying goodbye and being a couple of goofballs making each other crack up -- "Bye bye, goo goo!" 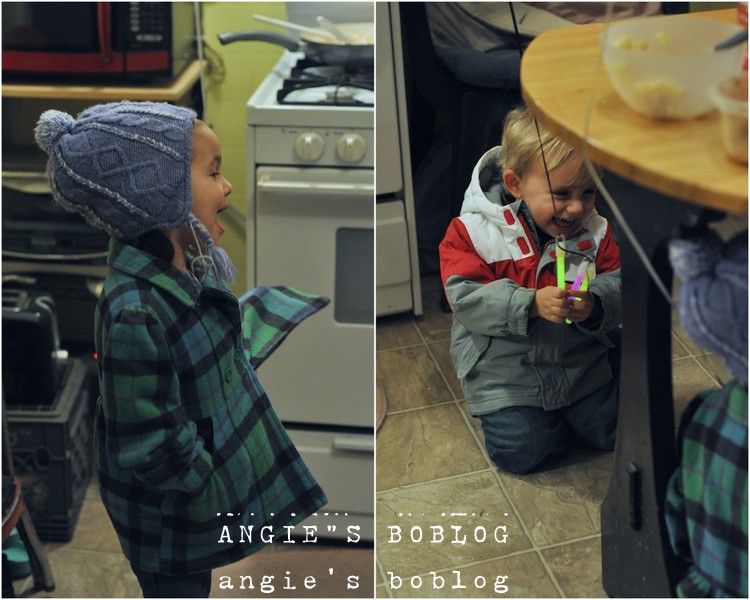 We let Bubbs stay up late (playing with his awesome new fire station from Grandma), hoping he'd be too exhausted to care about not having his sucker.

Here I am at 11pm with my exactly three year old, nudie as he came. 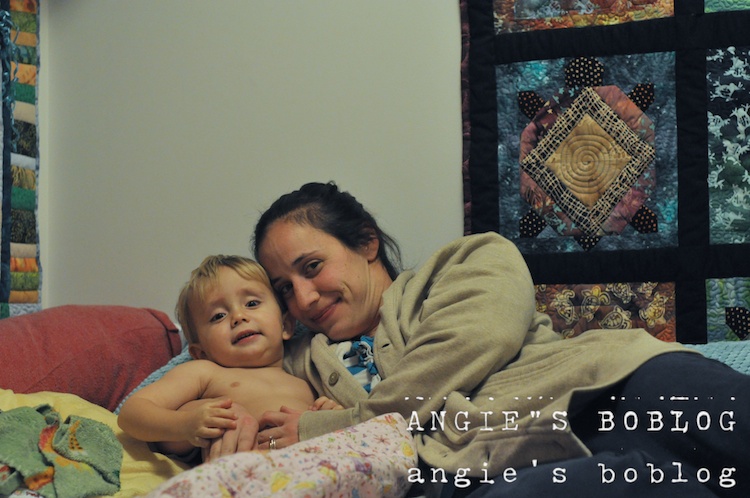 ohmygoodness I love him SO much.  Can you tell? 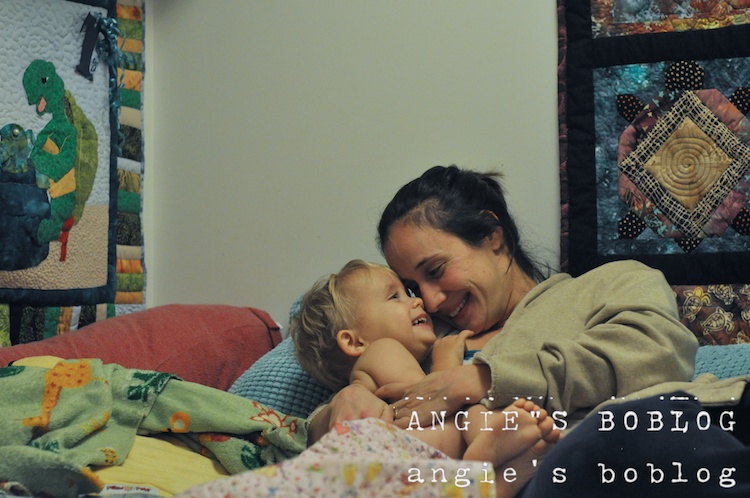 Jumping on the bed in his new Batman jammies... 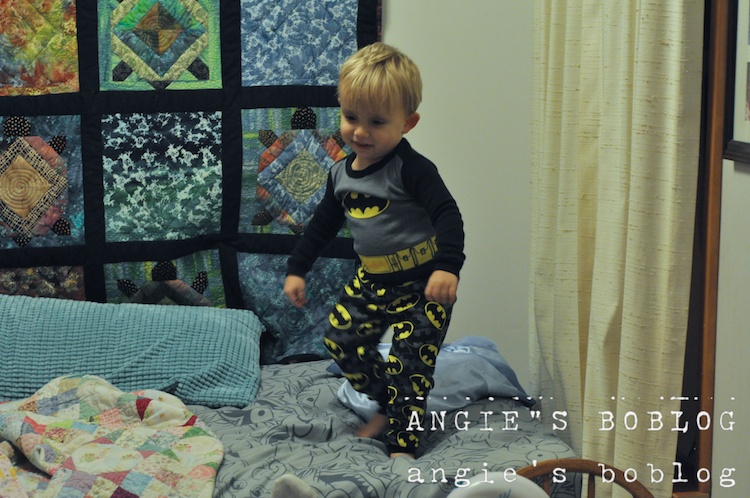 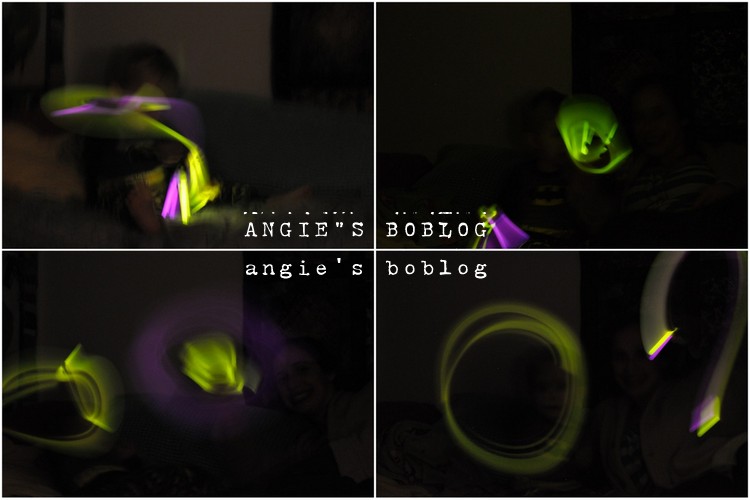 And his first breakfast as a real three year old -- his breakfast of choice these days -- peanut butter and jelly. 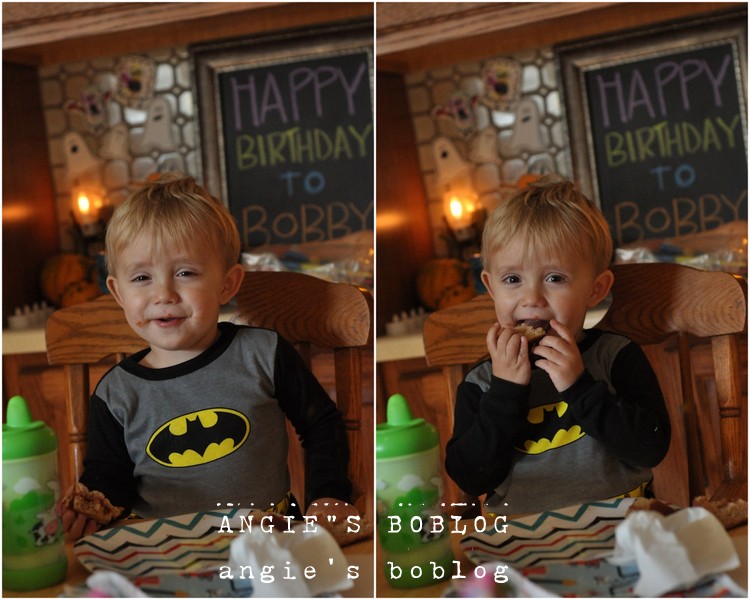 I am SO incredibly thankful for this gift of motherhood.  I don't take it for granted.  Even when his whininess is at its finest -- I'm so glad he's mine, and I'm his.

Love you like crazy, my little pup!  Can't wait to see what THREE brings!
Posted by conveyableflow at 11:09 AM