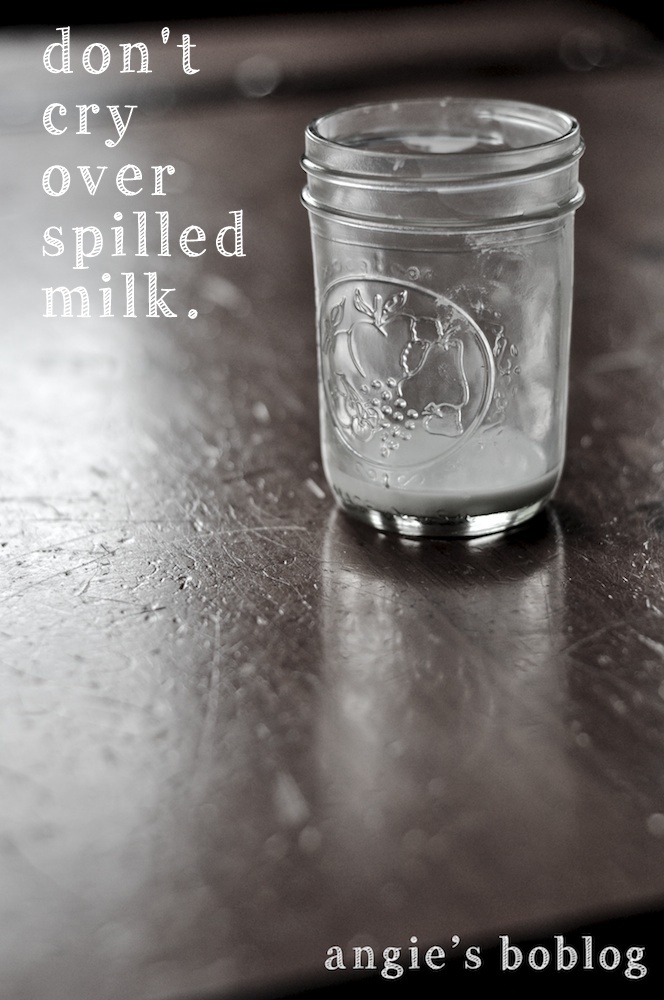 so:  Bob spilled a cup of milk at the table this morning (we have this struggle lately: he wants a grown up cup, not a sippy cup, but he's... rambunctious... and he spills his milk.  often.  it can be infuriating.)  when it happens i usually repeat to myself, 'don't cry over spilled milk' and keep calm.  but sometimes, you know, like after you've urged him over and over to please just drink his milk and he still hasn't and then it spills everywhere, there is a temptation to just lose it and really make the boy feel the rage, to rant that he will never again use a grown up cup until he is in fact an actual grown up!  but today, despite the stars being aligned for a meltdown, I held back.  as I scooped him quickly from his milk-sogged seat he said, "I'm really, really sorry.  It was a.. really.. good accident!"  I had to laugh and couldn't stop.  "What?  Why are you laughing?! ... Heh, heh.  I love you, Mommy."  And then I knew for sure that I'd been right in holding back.  Because the relationship is more important than a mess.  Strike that.  The relationship is most important.  So, I clean up some milk still chuckling, and then pour a little more into his glass.  "Okay, Bub, but you're not off the hook here.  Stand here and drink all this milk up until it's gone."  Enter the beginning of another breakdown from Bob because the two ounces I poured are sooooo much.  (I'm not the milk nazi or anything, it's just that Bob is tiny and I've decided I need to start making him finish his glass of milk, that's all.)  Again, I easily could have lost it on him.  Seriously, more crying!!??  But instead I quickly hushed him and said, "Hey, Bob, remember when you just spilled that milk but I didn't throw a fit and I stayed happy because I love you?  Could you respect me the same way and just drink your milk?"  And he wiped his face with his hands and pulled it together and drank up all his milk.  and it felt good, because he felt loved the entire time, and I felt lovable the entire time, and the situation worked out positively for both of us, and maybe he learned just a bit more empathy and patience, and so did I.  Intimidation may be an effective tactic for getting children to comply, but not to learn.  When we yell at our children because they aren't doing something we want them to when we want them to or they've just done something we didn't like, we sound exactly like the three year old who screams because we won't let him skip dinner to play.  or when we moan, "why are you whining!?"  yep, that's adult whining.

and that's all she wrote.
Posted by conveyableflow at 12:01 PM

Email ThisBlogThis!Share to TwitterShare to FacebookShare to Pinterest
Labels: parenting