Dear Pupper: on your birthday 3.5

Yesterday, on your three and a half year birthday...

It was a gloomy, rainy day.  After all the sunshine and playing hard outside lately, it was actually nice to have a day off to just stay in our pajamas.  You'll never argue with that.

You woke up before me and Owen, and stalked us while we slept.  As far as I could tell, you did some snuggling and dressed yourself up in a winter hat and gloves "costume."  Eventually you cajoled me out of bed.

I let you wake Owen up with puppy kisses and you guys snuggled in my bed for a bit.

You ate breakfast -- oatmeal with maple syrup and nuts -- while we watched an episode of Mr. Rogers. (From 1986, a visit to a playground under construction.)

I put your blankie in the wash, after much much much sadness and convincing.  I tried to sneak it in -- it was hidden amongst Owen's sheets in my arms -- but you saw the bundle of bed laundry and freaked out.  "What are you doing?  Is blankie...?"  But you don't even finish the question because you're off running to your bed to check.  And then came the panic and screaming.  But eventually, you were okay; I let you put blankie into the machine which helped (you are otherwise never allowed in the basement).  Then...

We played Duplos and made a giant tree house for the zoo animals.

I pitched some indoor baseballs to you and Owen.

You played some Wii Fit Plus and Excite Truck, with Owen pretending to play along.

We had lunch: peanut butter and jelly with grapes on the stem.  You ate super fast and asked, "Is bwankie dwy yet!?"

It was.  I washed you up and took you to pee and read you one book ("What Kind of Truck?") and snuggled you in for your rest.  "See you in the other mornin'," you said.  And you went right to sleep.

You woke up and went straight to the bathroom to pee all by yourself.

You rode your tricycle for a bit, and tried to get Owen to wear his bike helmet.

But -- Owen woke up a little grumpy, so I gave him some nursies and turned on a little Fireman Sam to help him wake up.

You played fireman with "ropes" to slide down (the strings that you and Owen have pulled from dad's and my sweatshirts).  {"Hey, mom, do you know if I could tie this onto here possibly so I could slide down the rope?"}

You played "tiny stuff" at the kitchen table while Owie started his supper.

It was time for your supper; you loved it, but didn't eat it all.  Not until later on.  {Steak with mushrooms and onions, rice, and carrots with lots of butter.  "Mom, can I have these mushrooms every day?  I'll have one with my peanut butter and jelly."}

I went to a dinner with Grandmother; you stayed home to play with Dad and Owie, and I don't know exactly what you did but it seems to have involved throwing every ball we own around the living room.

I came home and put Owen to sleep.

Then I read you one book -- The Berenstain Bears and the Bad Dream (one of your faves, not mine) -- and tucked you in and said our prayers and sang you a song and told you how very very much I love you and kissed you two dozen times and said, "goodnight, my love," as I snuck quietly out of your room.

And that was the day you were exactly three and a half.  I checked in on you again before I went to bed, but just as of last week I've stopped taking you to pee in the night, so I didn't wake you.

The only photos I took were of morning snuggle, and your face managed to avoid the camera!  Still, a cute showing of your brotherly love. 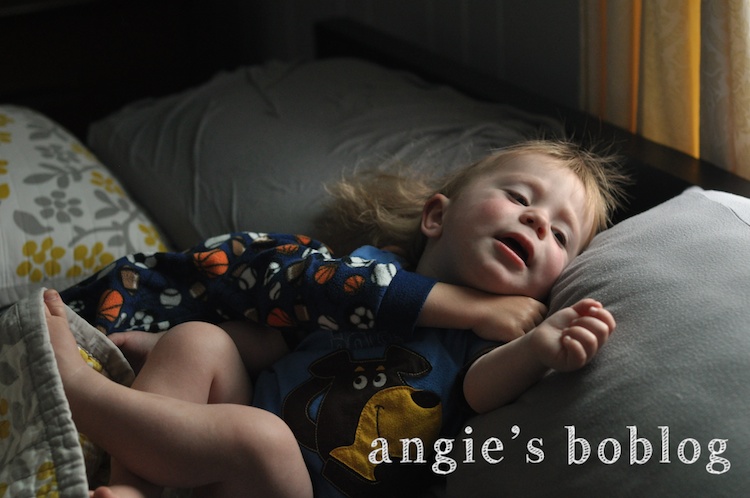 Other quotes from the day:

"Mom, Pupper doesn't know that Wooden is his best fwiend."