Beverly from way up high

Last week our next door neighbors had a huge tree between our houses taken down.  At first I was quite sad about it because that tree provided half the shade in our back yard, and also I just thought it was a shame to remove one of the few remaining trees scattered amongst the homes in our neighborhood.  I even tried to talk one of the tree guys out of going through with it.  Then I started wondering, how the heck are they even going to do this?  Our houses aren't far apart, and the tree was tucked in back with a fence hugging one side and a deck hugging the other.  But as I learned over the next two hours, with four men and four big trucks, anything is possible.  And when I saw that one of those big trucks was a bucket truck (a very tall bucket truck!), I knew that I had to go up in it.  I saw the whole thing as a once-in-a-lifetime opportunity to see a bird's eye view of Beverly, and I wasn't about to let the chance slip me by.  Ben said, "There is no way they are going to let you up in that thing... Their insurance won't allow it... Blah, blah, blah."  But what Ben forgot at the moment is that I can be very persuasive when I want to be.

I watched with amazement as they took the tree out with just four cuts, I took lots of pictures, and I waited patiently as they cleaned up. 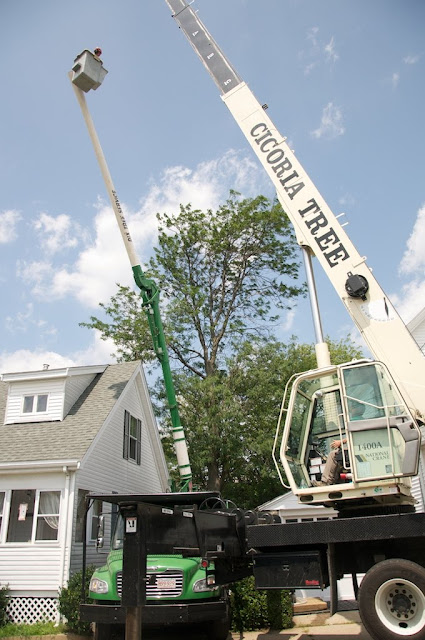 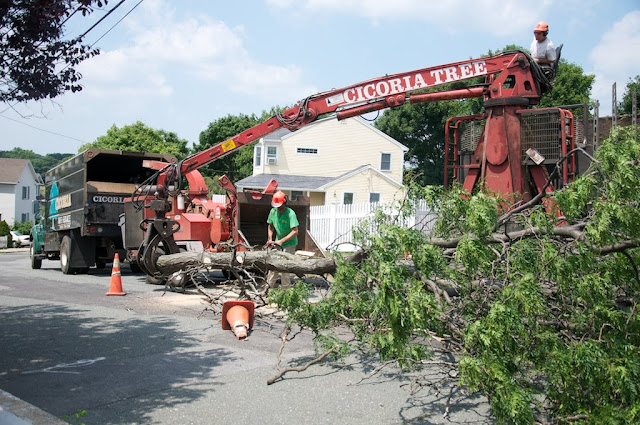 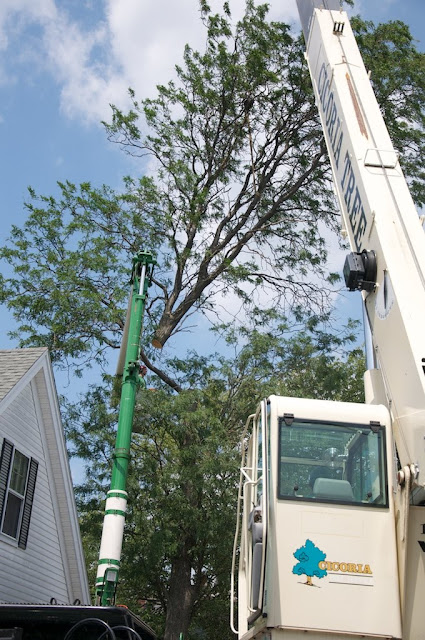 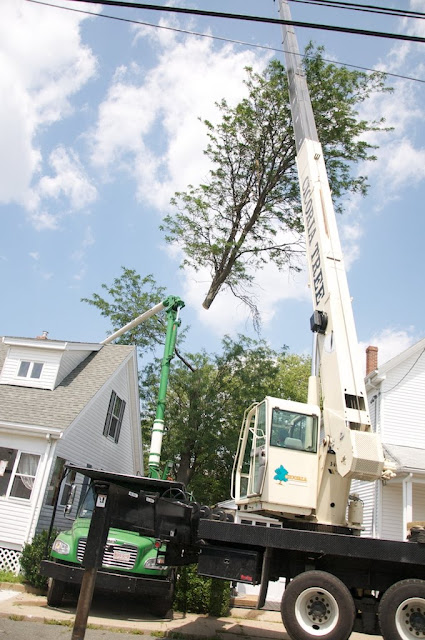 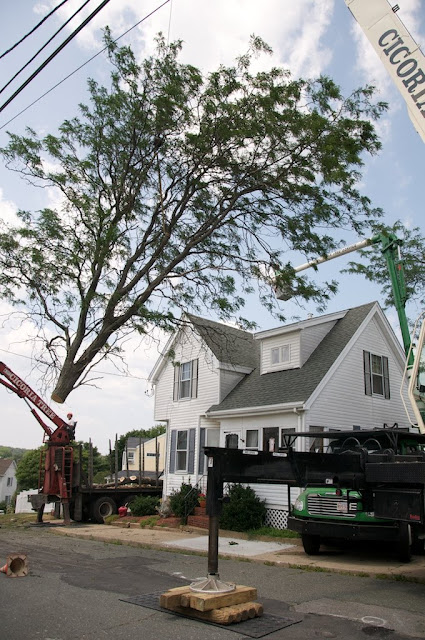 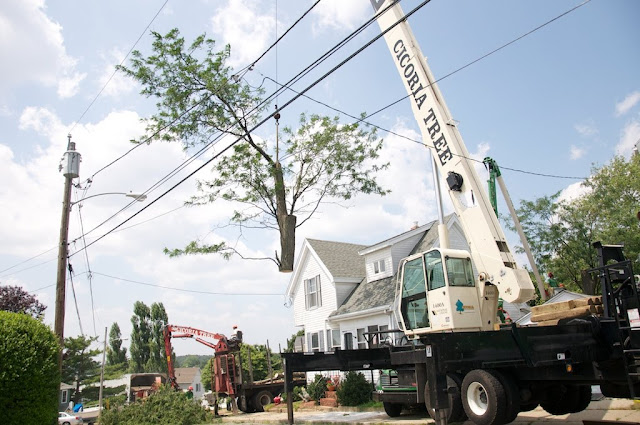 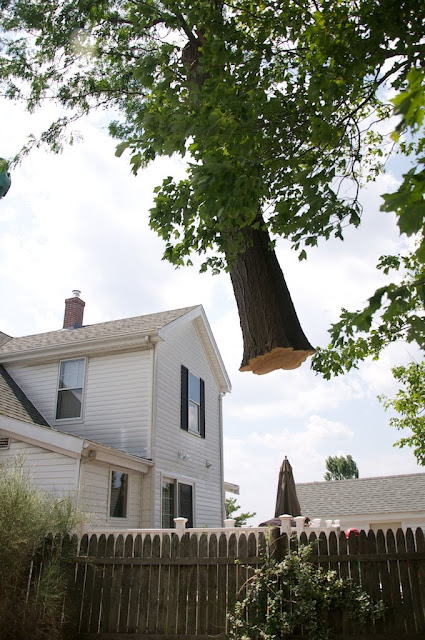 And just like that, in less than two hours start to finish, the tree was gone.  When they were just about done, I started hinting and then pleading for them to send me up in the bucket, and it wasn't even as hard as I expected; the guy in charge said "sure" without a second thought.  I can't even tell you how excited I was.  Other than our trip to Jamaica, this was easily the highlight of my year so far.  Naturally I brought my camera up with me...
Here's the guy sending me up: 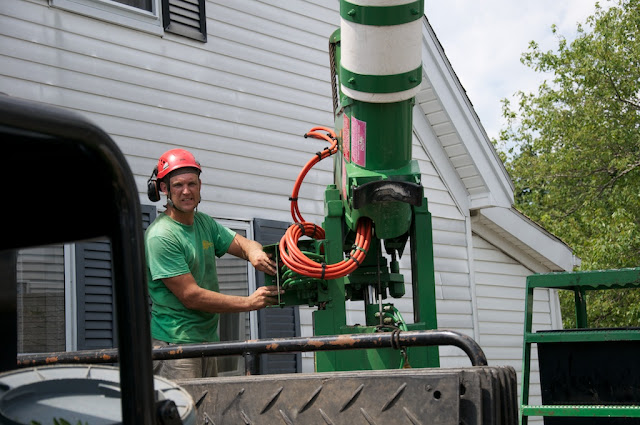 Here's the view north, looking toward the School Street beach that Bobby and I walk to almost every day: 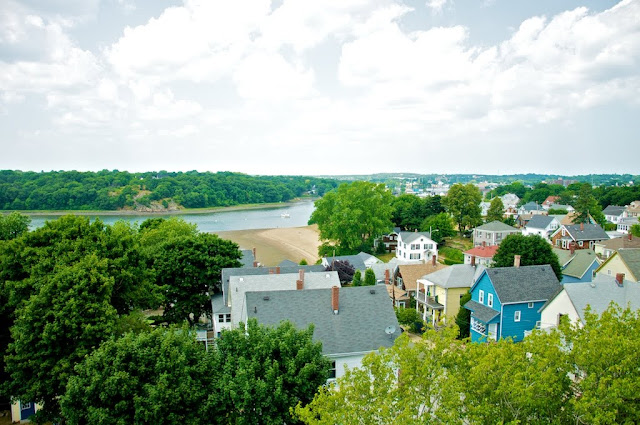 Here's northeast.  See the First Baptist steeple over on the right? 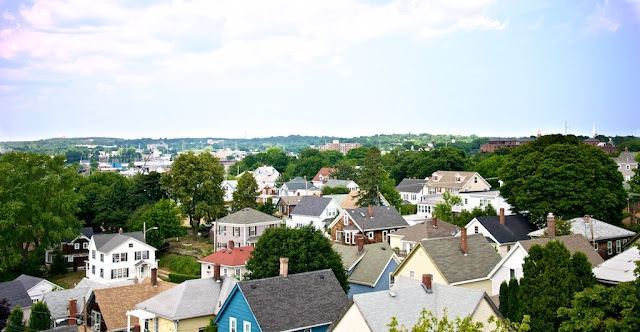 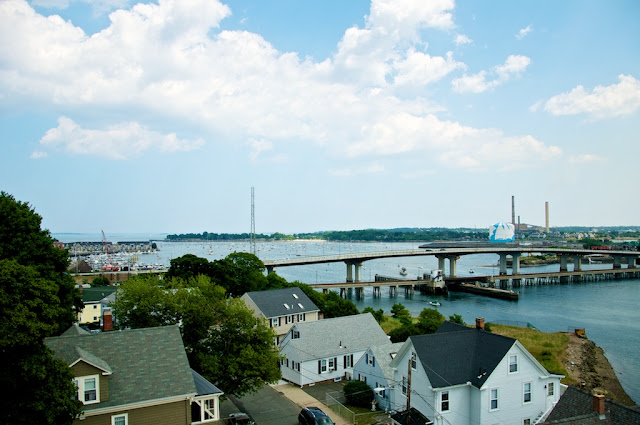 And west, toward the Kernwood Ave bridge: 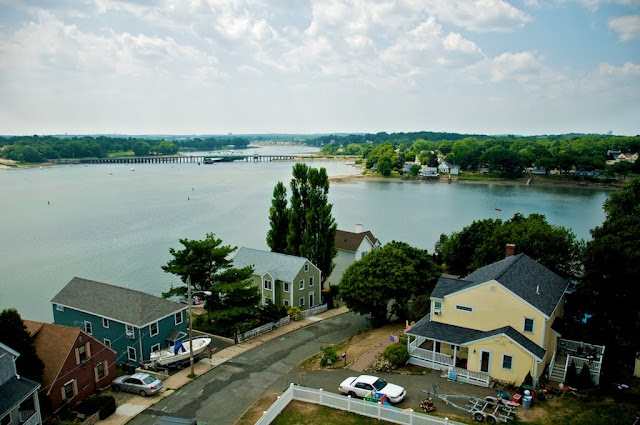 Looking down toward our house -- see tiny Ben and Bob? 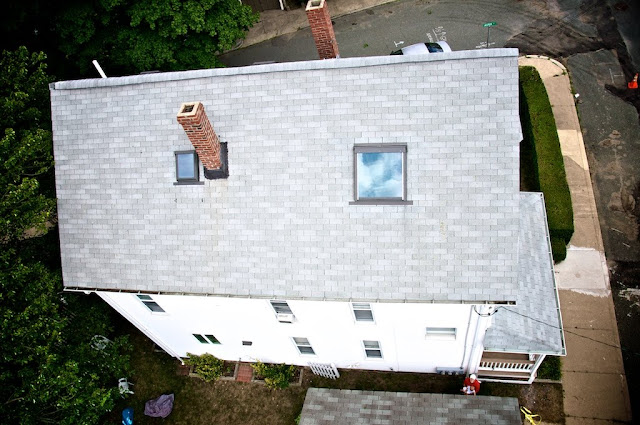 Here they are again, across the fence from the tree (now just a stump) that made it all possible: On my way down: 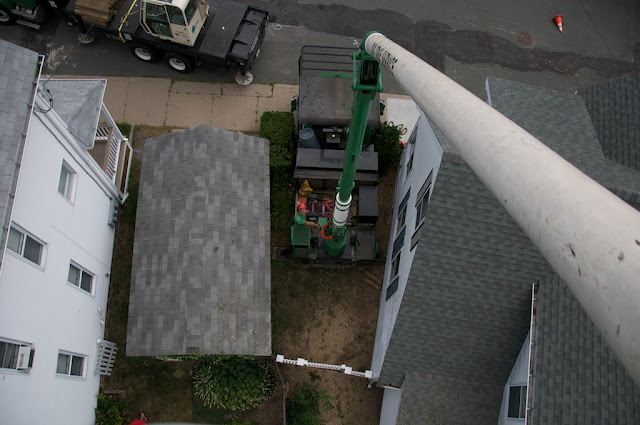 When I was back on the ground one of the guys asked me if I was scared up there.  "Are you kidding me?" I said.  "I just watched your man chainsaw a tree from up in that thing.  How could I be scared?  That was FUN."  He couldn't believe it.  Most guys are terrified their first day on the job, he told me.  But me, I love being up high.

I told Ben I was going to start driving around looking for more opportunities to go up.  He didn't think it was such a good idea.
Posted by conveyableflow at 4:21 PM