Inspired by my latest read, A Walk in the Woods: Rediscovering America on the Appalachian Trial

, by Bill Bryson, I decided to take Bobby for a hike on Thursday.  I dusted off my handy-dandy 1975 edition of Fifty Hikes in Massachusetts, which I obtained for next to nothing at a library book sale, and searched for something nearby.  I settled on Ravenswood Park in Magnolia.  "In 1889 the 300 acres of wooded land, rocky knolls, and swamp making up Ravenswood Park were given by Samuel E. Sawyer 'for the benefit of all who want to walk and enjoy the woods.'"  The trail was to be located at the far end of the parking lot of the Magnolia Chapel, located on Route 127 between Manchester by the Sea and Gloucester.  I couldn't recall such a chapel, but decided to go for it anyway.

The weather was perfect for a ride in the Jeep, and 127 from Beverly to Gloucester is the perfect road for driving.  However, I didn't see any chapel in the area where the trail head should be.  As I crossed the town line into Gloucester I thought about the fact that 1975, the year my trail guide was published, was a good 35 years ago, and chances are a wee bit's changed since then.  I don't make it to Gloucester very often, so while I was out that far I pulled over for a stop at the Fisherman's Memorial and took Bob for a little stroll.  Here are the pics: 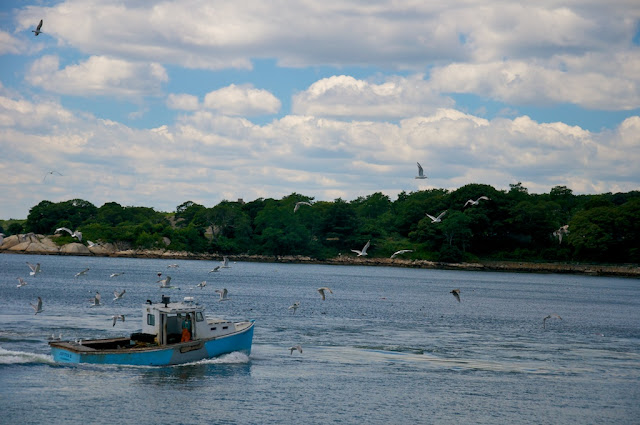 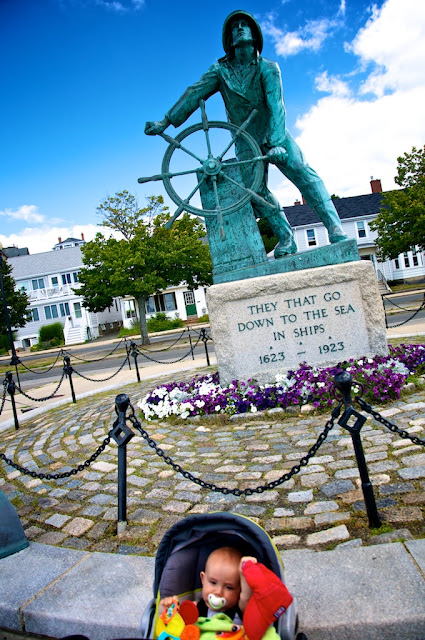 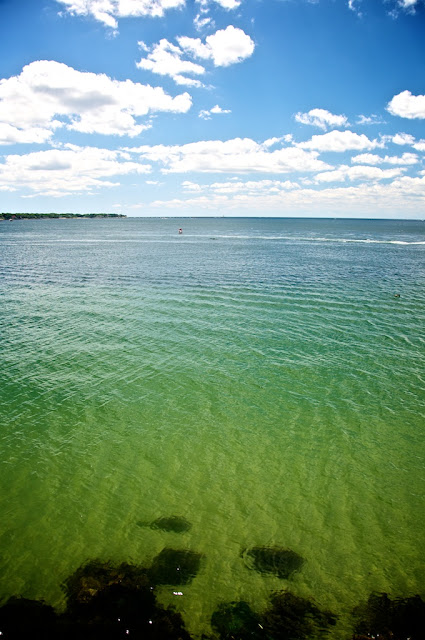 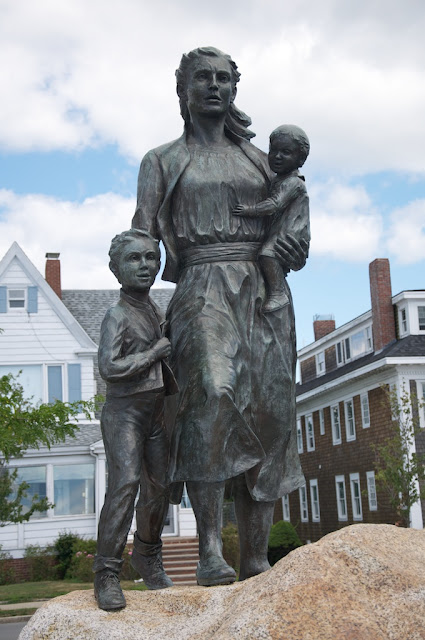 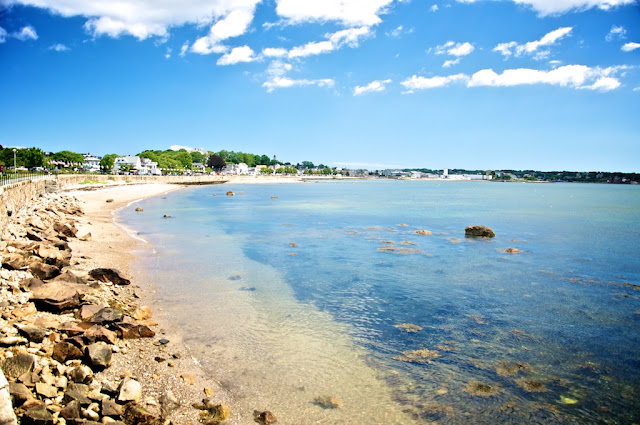 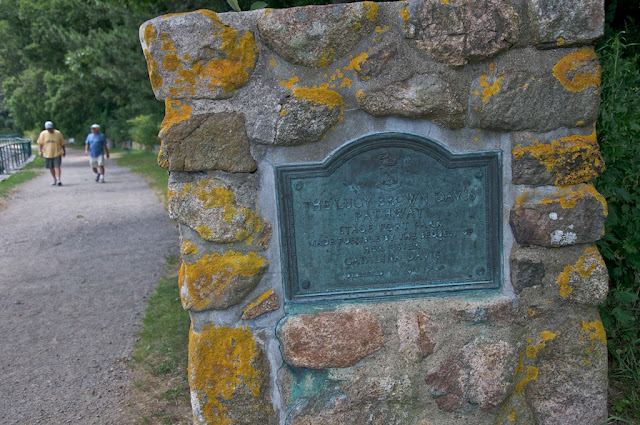 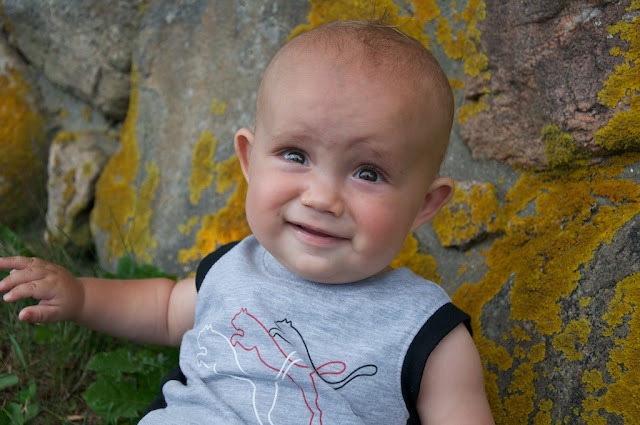 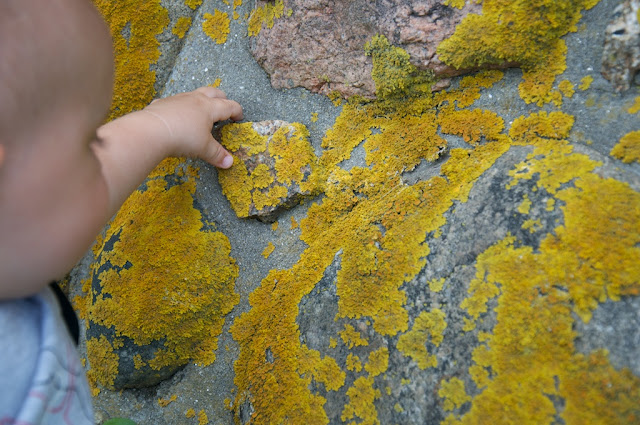 On my way back down Route 127 I wasn't looking for a chapel.  I had passed earlier a green sign that said "Cape Ann Discovery Center" and figured that would be the place.  When I neared it I saw a Trustees of Reservations sign for Ravenswood Park.  We had found the parking lot for the trail.  I was feeling quite accomplished already.

We don't own one of those fancy hiking backpack baby carriers.  I opted to carry Bob in the Moby Wrap, even though I knew it would be hot, because it's so much easier on the back and shoulders than the Jeep carrier we have.  I put some supplies in a backpack and situated Bob facing forward on my front.  I was carrying, I don't know, 30-35 pounds maybe.

I consulted the large map at the start of the trail.  I compared it to the little map in my book and noted some similarities but also quite a few differences.  For one thing, the reservation has doubled in size since my book was printed, now containing 600 acres and 10 miles of trails.  But I figured I couldn't get lost in a place like this, so we started on our way. 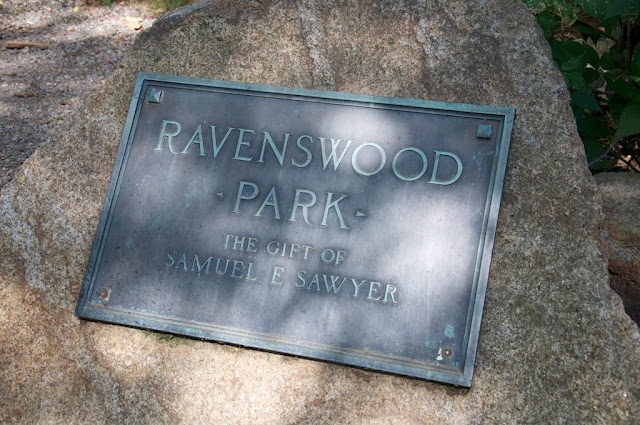 I opted to try out Ledge Hill Trial because although it had a different name I was quite sure this was the trail my book recommended.  I still had quite a bit of energy when we reached the first landmark, which was supposed to be a pond but was completely dry: 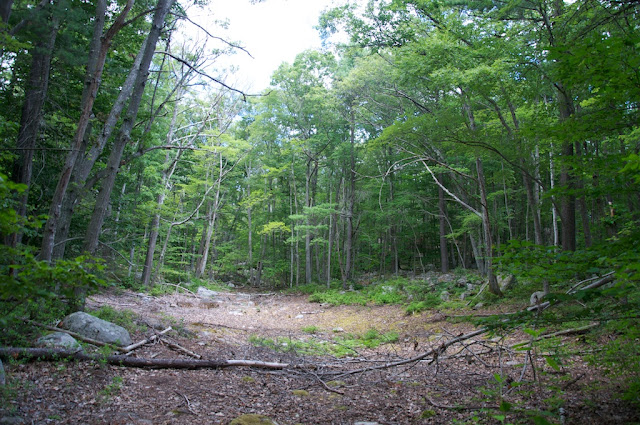 Not too long after that, though, I needed a rest.  We stopped at this cool rock for a quick photo shoot: 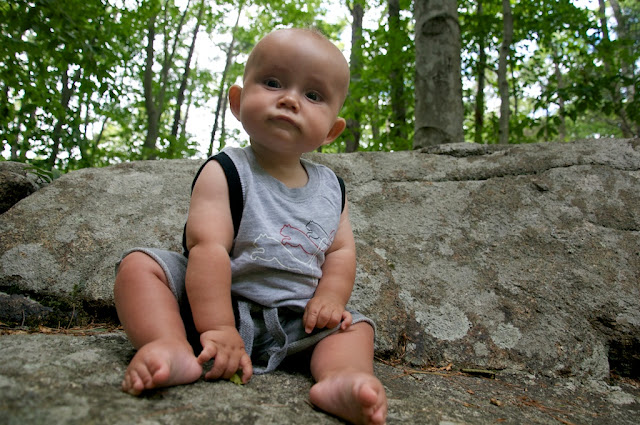 Note my sweaty red face and the vein bulging from my forehead: 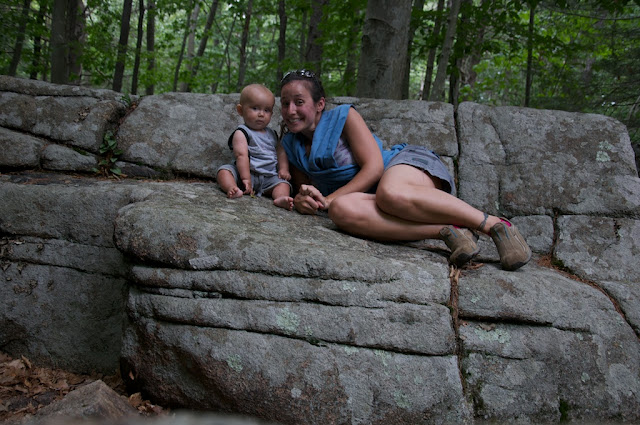 Without too much trouble we made it to what I assume was Ledge Hill. 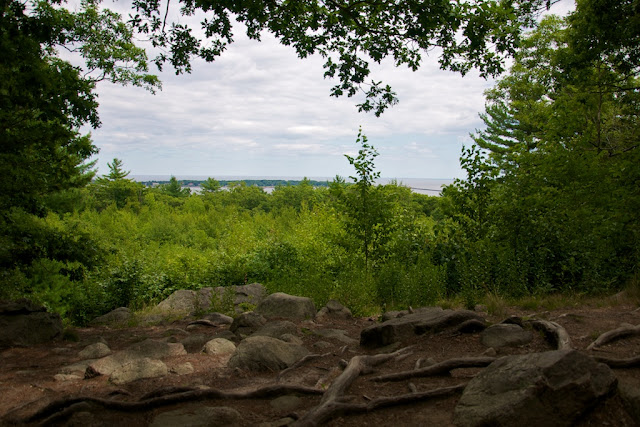 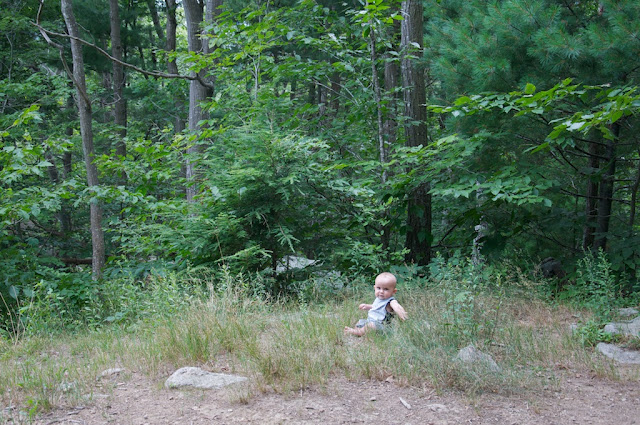 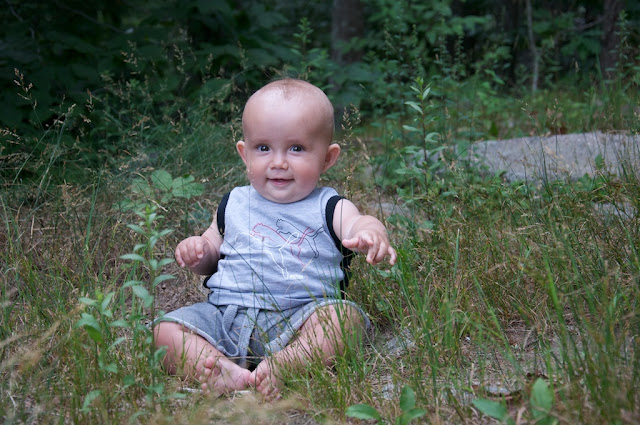 We rested on a bench up there and had a little snack: 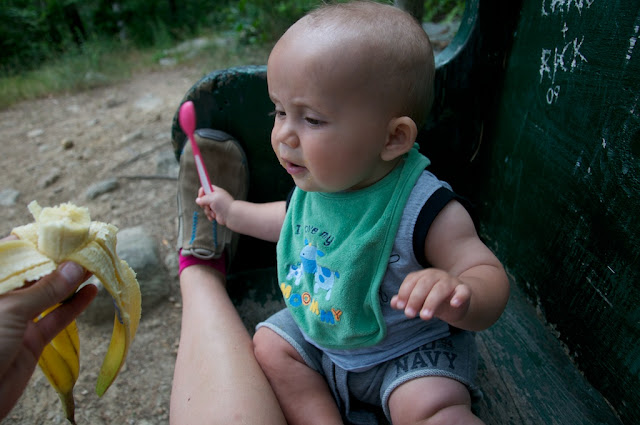 At this point I was quite sure I knew where we were on the map.  I tried to figure out what to keep an eye out for next and which way to turn, and we pressed on down the other side of the hill.  The way up was tiring, but the way down was worse: steep and rocky and no clear trail for a while.  I imagined myself spraining an ankle and having to hike all the way back in agonizing pain with my giant baby making it nearly impossible.  At the bottom of the hill I came to another trail, but the junction didn't look like the one in my book.  Darn.  I took a guess and turned left.  Soon I was at another fork I didn't recognize, and none of these trails were marked, so reluctantly I turned back, hiked all the way back up the steep hill, and rejoined the Ledge Hill Trail.  By this point I was absolutely pooped and considered going back to the parking lot the same way I had come, but I really didn't know what would be faster and didn't want to be lame, so I continued on the opposite way.  I walked and walked.  Bob was getting restless and whiny in the Moby.  I was sweaty and tired and thirsty with very little water left and I had no idea where I was or how far I was from my car.  I started praying.  Finally I stopped to give Bob and myself a rest and to turn him around so he faced in rather than out.  I started again.  I sang as I walked to keep Bobby calm, even though I was so winded I could barely breathe never mind keep a tune.  Before too long he fell asleep and the walking got a little easier with him being still.  And then, at last, I came across the wide path I had started on, and I was well-enough oriented to be pretty sure I needed to turn left.  I still had no idea how far I was from the end of my trek, but the walk was flat from here and I knew I could make it.   I even managed to sneak my camera from my bag and snap a couple of photos with Bob asleep on my chest. 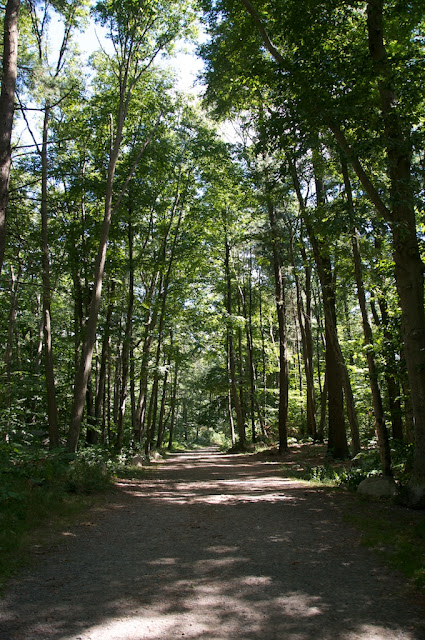 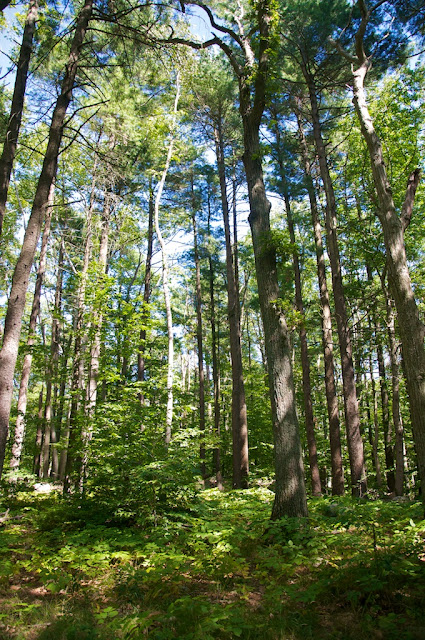 When I turned a corner and at last saw the parking lot up ahead, I almost started running toward it, except I had no energy to do so.  But in any case, we survived.  Even though I was on the verge of dying from thirst, I can't drive 127 in Manchester and not take the Ocean Ave loop, so we took this little detour on our way home.  Such a gorgeous spot: 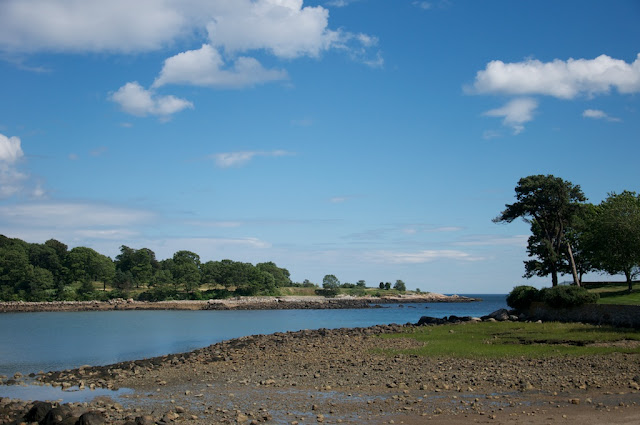 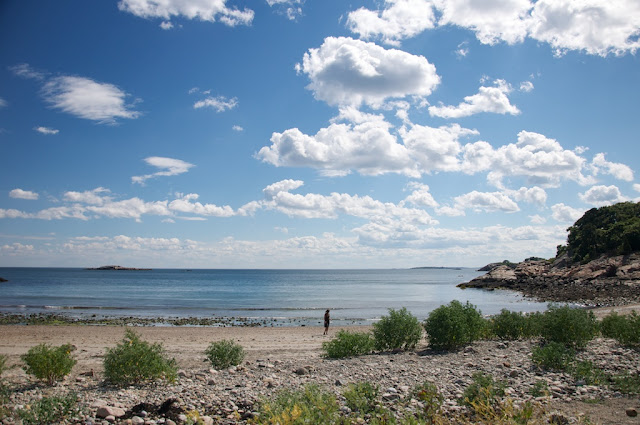 What did I learn from my adventure?  1. Hiking guides that are 30+ years old are discarded by the library for a reason.  2. Ravenswood Park is a lovely place to enjoy the Cape Ann woods.  3. I think I'm going to need to invest in a baby carrier that's actually designed for hiking before I try that again.
Posted by conveyableflow at 11:50 AM