It's official: Bobby says his first word.  Okay, it's not exactly official, I mean there hasn't been a ceremony or anything, but he does.

He's been doing a lot of babbling for a while -- ma-ma, da-da, bob-bob.  For a bit I thought he associated some meaning with "mama" because when I left the room he would whine it over and over, "ma ma ma ma."  Now I'm quite sure I was reading too much into that.  But he really does seem to know "dada" or "dad-dad" -- he says it sometimes when Ben comes home after work.

There's one word we're sure about, however: ball.  He says it over and over again when we play ball with him.  Sometimes it takes him a few tries to get it out and he sort-of stutters: "b-b-ba-ball." 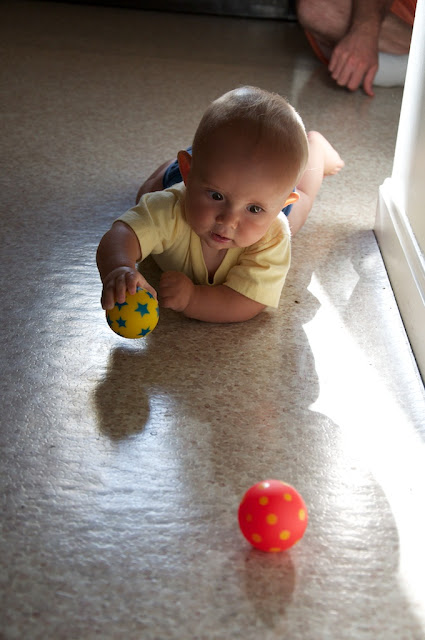 He seems to be very interested in learning to talk.  When I show him an object or emphasize a word, he studies my mouth like he's trying to memorize what I'm saying.  His little sponge brain is just soaking everything up... Can't wait to hear what this little guy has to say.
Posted by conveyableflow at 12:42 AM