Bobby's growth slowed down between his 6 and 9 month checkups, so we scheduled an extra visit at ten and a half months to do a height and weight check.  Today was the day.

Here he is exploring the waiting room and waving at everyone: 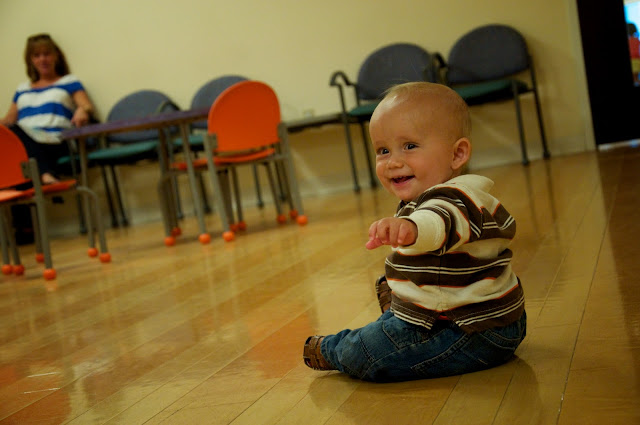 He grew a little, but still not very much -- he's now at 17 pounds, 14 ounces and 27.5" tall, or thereabouts.  His size is around the fifth percentile for his age.  My little shrimp.  The doctor wasn't concerned, though -- she said he looked perfectly healthy and he was moving all over the place. 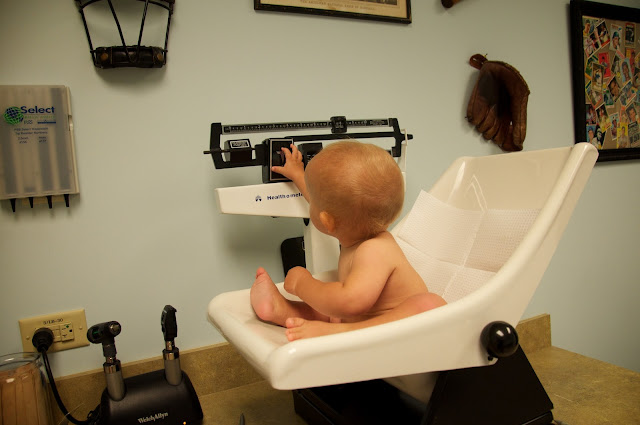 Earlier I said to Ben, "Maybe Bob's really a midge after all!"  (Partially thanks to Little People Big World, I am slightly obsessed with the small.)  Then we laughed about the imaginary scene of me excitedly asking the doctor, "Is there any chance he could be a little person!?" 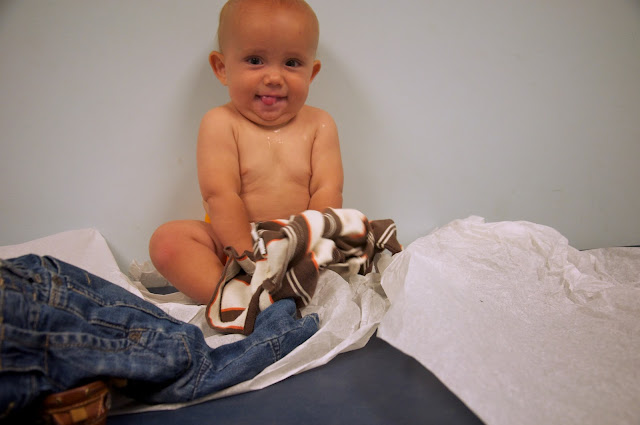 Bob did a lot of being cute and showing off while we were there.  After seeing how impressed the doctor was with Bobby's talking, I'm even more proud of him.  Here's how our conversation went:
Bob is sitting on the paper table liner, tearing it to shreds.  I say, "paper," and Bob says, "puh."  The doctor is impressed.  "Puh" is a hard sound, she says.
Bob sees something across the room that reminds him of a ball (could be almost anything), and he says, "ball."  The doctor thinks it's adorable.
I decide to help him show off a little more, and say, "Which animal says [insert panting sound here]?"
Bob says, "dog," and the doctor was clearly very impressed.
Since we were on a roll, I break out the big guns, the one we've been training for... "Robert, say 'I'm Bob.'  And Bob repeated, "I'm Bob."  Clear as day.  The doctor was shocked and burst out laughing.  I didn't let on that this was his first time ever giving in and saying that for me.
Some other things Bob tries to say...
tree, but it comes out "tuh"
string, but he only manages "st"
cup, pronounced "puh"
bird, which sounds suspiciously similar to dog
"na-na" means some combination of nurse-nurse and night-night
"dada" he says perfectly and often with meaning
what's that/who's that = "sat" or "issat"
Maybe there's more, maybe not; that's all I can think of now. 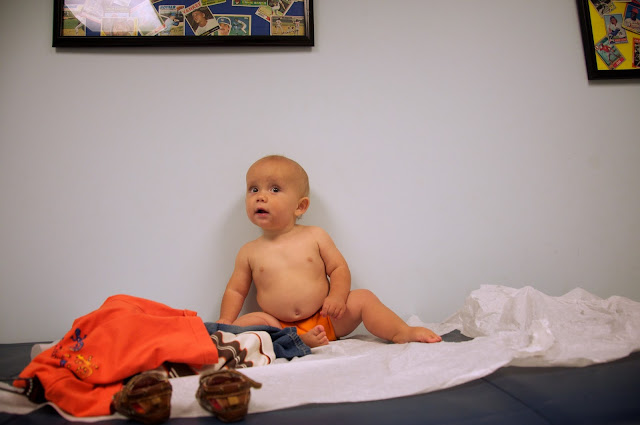 Posted by conveyableflow at 12:12 AM