I want to catch my death of cold... 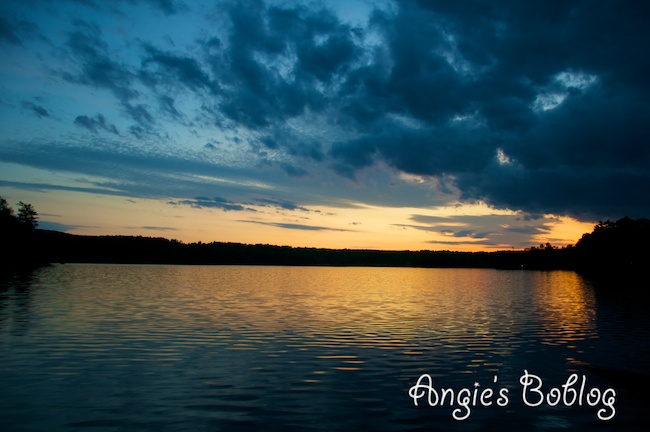 My mother had been begging me to visit for Memorial Day weekend; I decided that I needed to do some things to get ready for our trip to Jamaica the next week and couldn't make it.  But then I got the call about the stroke, and we ended up driving out anyway, to be with Gram and the family at the hospital.

When we got there, Gram was okay (meaning alive) but she still hadn't been able to say anything, or move the right side of her body.  I remember feeling like I would never get to have another real conversation with her, and it felt awful.

I went to Gram's bed in the ICU; when she saw me she managed to say, "Hi. Hi, Ang."  I could tell she was relieved to see me, and it helped relieve my fears a little to see that she understood what was going on and was already beginning to communicate a little.

When I talk about Gram, most people ask, "How old is she?"  I don't know why the question offends me.  She's 89, about to be 90.  So what?  Is she of the age that we just shouldn't care if she suffers or dies anymore?  To me, Gram should live forever.  I don't feel ready to lose her.  There are threads in the family that are just too thin, I'm afraid they'll break without her holding everything together.

I've tried to write about this several times since last May, but I can never quite find the right words.  It's so easy for me to write about all the joys of watching my little person's beginning in this world; it is so so hard to watch my favorite older person's ending.  The truth is, I think, Gram is just waiting patiently to die now.  She loves her family, but she's lost too much.  Too many relatives, all of her friends, her husband.  Many years ago, riding in my car, Gram said to me, "They say time heals all, but they are wrong.  It gets harder every day."  I can't imagine losing my husband -- not now, not 50 years from now.  Yet so many women have lost theirs and kept pressing on -- my Gram and her two daughters, and Wendy Matte, whose husband Bob's wake we attended on Friday, included.

Nine months after her stroke, Gram is doing better; she's getting around the house okay, but she's very weak.  She's communicating quite a bit, all of the normal, everyday things.  But there is so much that is lost in her head; all day long she searches for words she can't find.  Sometimes I can figure out what it is she wants to say, and sometimes she gives up frustrated.  In a way it's funny ("Put your homeworks on," she said, meaning "boots,") but mostly it's heartbreaking.  When we were visiting last weekend she said, "Oh, I wish you could understand again."  And I had to leave the room because I started to cry.

Being old is just a cruel way to end life.

When I'm Gram's caretaker, I do my best to give her a good time.  Bobby helps quite a bit.  She loves to watch him do everything he does.  "Oh, isn't he somethin," she says. 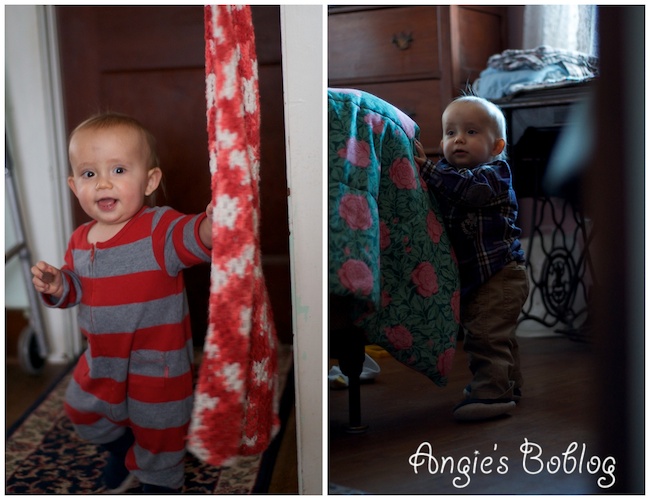 So I pulled the old paint by numbers out of the attic, and we painted. 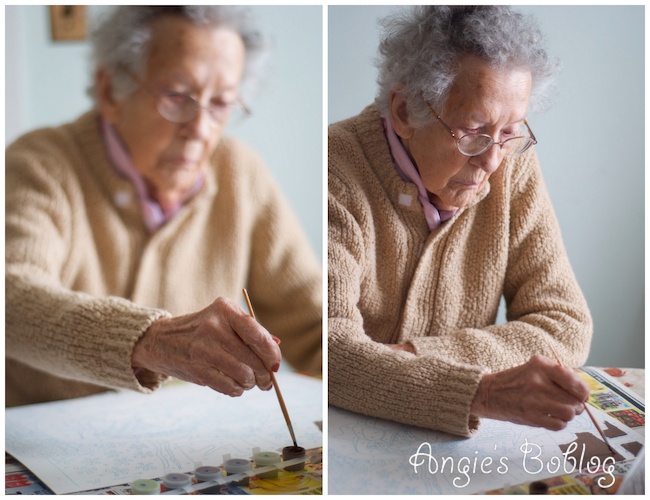 I wish I had taken a photo of Ben's project or of "abstract #1" once it had more paint on it, but I didn't, so, oh well.

Bobby loves to play with all of Gram's teddy bears.  (In her old age, she's gathered quite the collection.)  She got a new one recently -- a huge one.  Almost as soon as we got to her house she started trying to tell me: "I want to show him something; it's a little monkey."  Soon I realized she was talking about the big bear I had noticed in her bedroom, not a little monkey.  The brain is an amazing, funny thing; it's so strange how all the words are up there in Gram's mind, but it has such trouble finding the right ones. 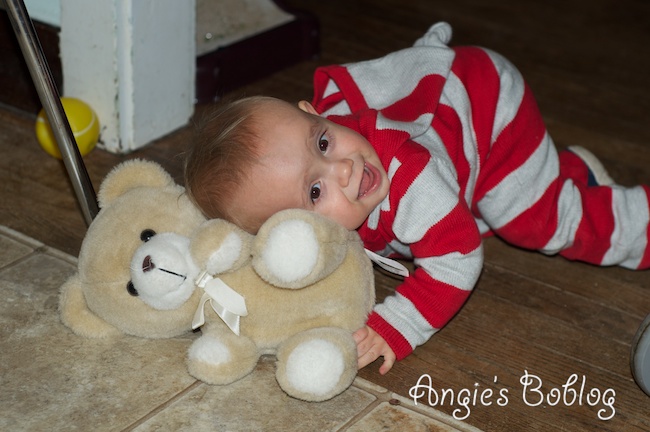 Here's Bob playing with the same bucket of toys that all the kids have played with at Gram's... 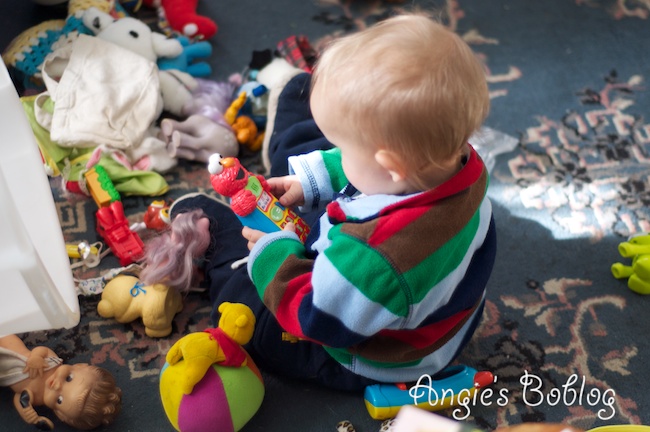 There's a little something of everything in there; the doll in the blue dress was my mother's, the my little ponies were mine, the nerf was James's, I see a happy meal toy or two.  The toy phones and helmets (not pictured) are Bob's favorite items; the entire bucket usually doesn't last more than ten minutes before he moves on to playing with non-toys. 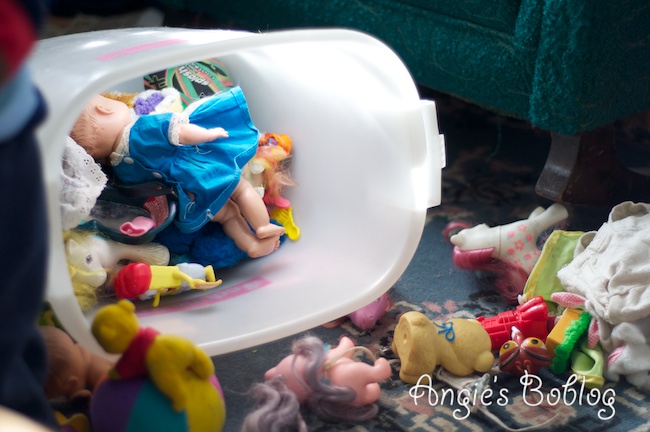 On Saturday my brother Dave, Crystal, and Mason stopped by to go sledding down the front hill for a bit. 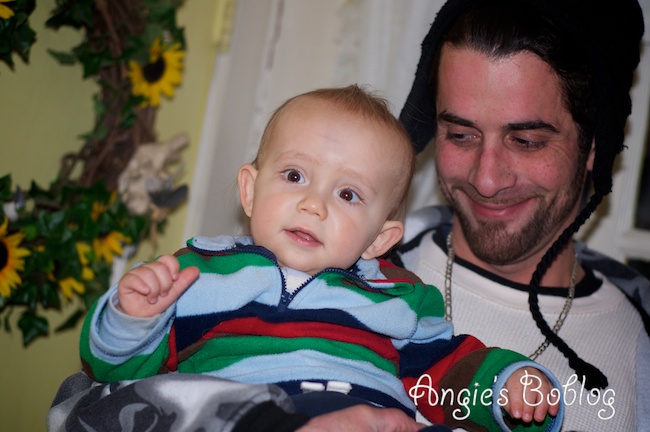 On Sunday I gave Bobby a butter cookie (the kind that comes in the round blue tin) -- big treat -- and he savored every crumb and every second of the experience.  For the longest time he just sat there holding it in his mouth, half hanging out. 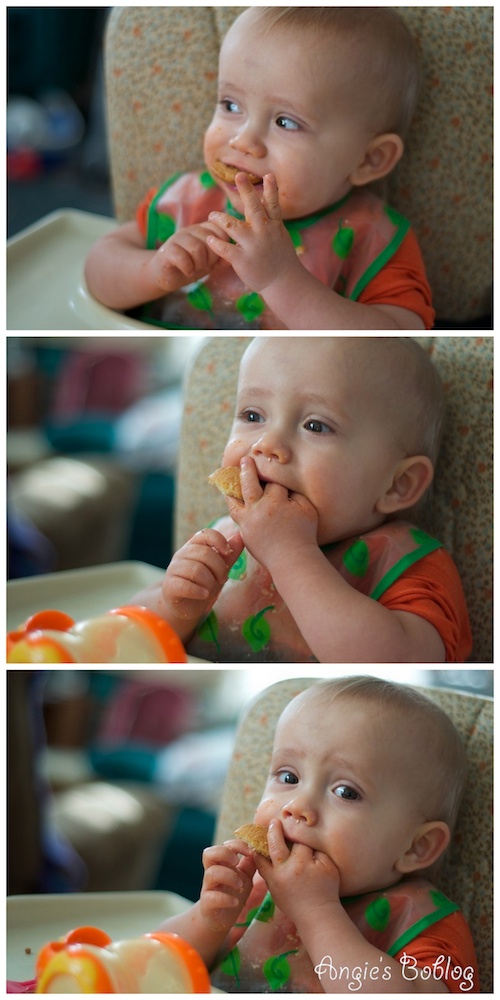 Since Bob's getting so good at climbing, this was the first weekend we pulled out the steps and allowed him to climb up the kitchen stool.  Big thrill. 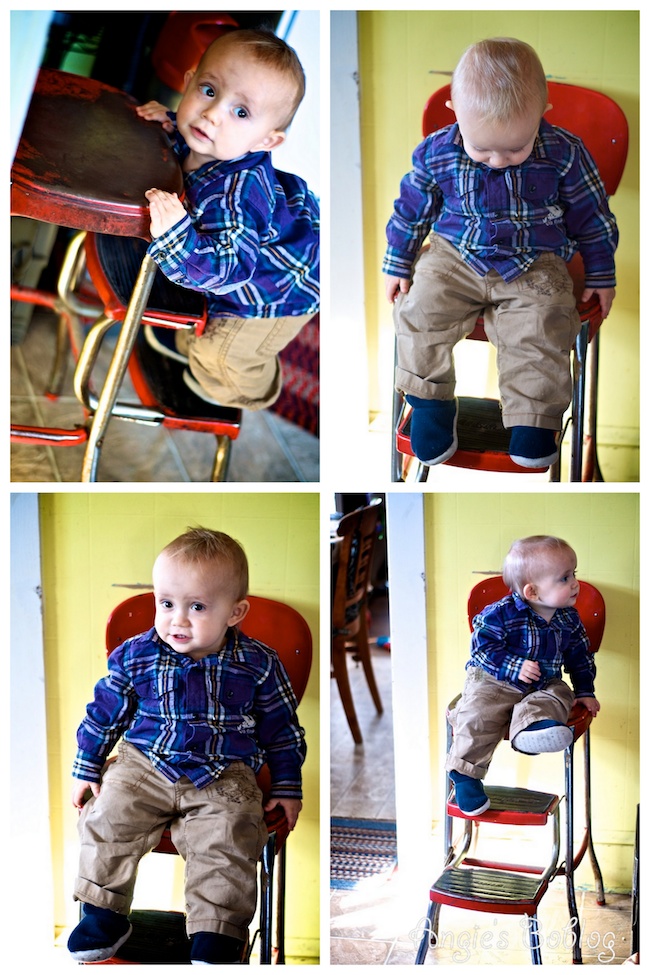 Not pictured are Bob's two very favorite things in the house: the cat and the cuckoo clock.  He's been searching for both since we got home.

Also not pictured: delicious massaman curry from a Thai place in Williamstown -- Ben's and my favorite meal.

I knitted this hat (my first ever) for Bob using one of those round hat-knitting thingies.  Found it in the attic and decided to use it as a diversion for the weekend.  Actually I made this hat in one evening.  It's super easy.  Gram loved Bobby's hat so I brought the supplies home with me to make one for her.  And I finished that one in one day, too. 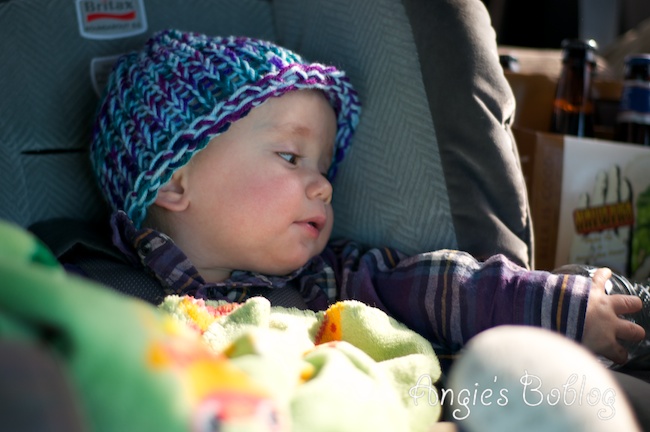 So, that's it.  Those are my incomplete thoughts on life after a stroke enmeshed with a recap of our weekend in the Berkshires.

Mom and Big Gram, thank you so much for taking such good care of Gram.  I wish I could be there more to help.  Gram loves you both a google.


I want to catch my death of cold... cause I'm scared of growing old...
Chris Garneau
Posted by conveyableflow at 12:29 PM