Ben is thirty!? {friends for the weekend}

Ben -- my husband, my best friend -- turned THIRTY on Saturday!

Sometimes when I blog I do pictures first, sometimes words first, but today (ok, this turned into multiple days) I'm having trouble because there are so many photos and so many things to say.  So let's try this stream of consciousness just see what happens style.
For Ben's birthday, I invited some of our best friends out for a surprise weekend visit.  Ben had his suspicions, but ultimately I was able to convince him that nothing was going on.  Then suddenly at the peak of his boring birthday sullenness friends appear, and WHAM! I'm the best wife on the planet.
Here's the cast.
Some of our best Beverly pals...
Ben and Christina... 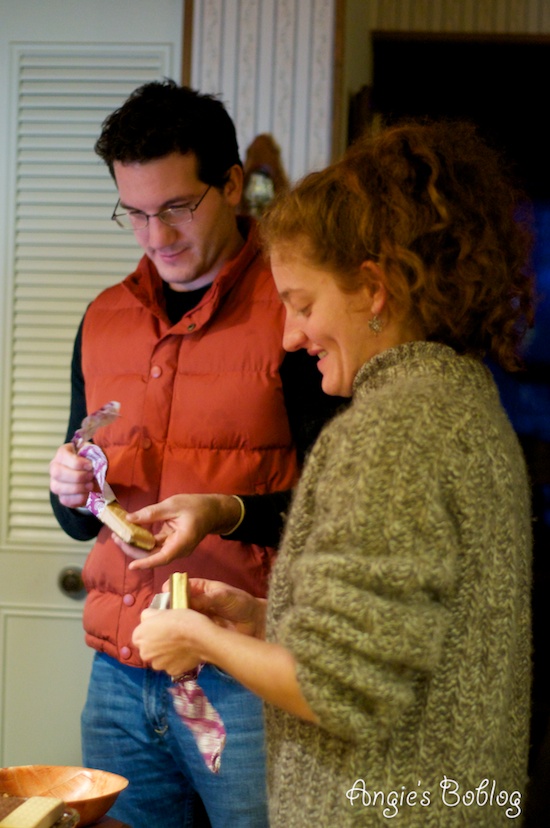 and Ben and Susan... 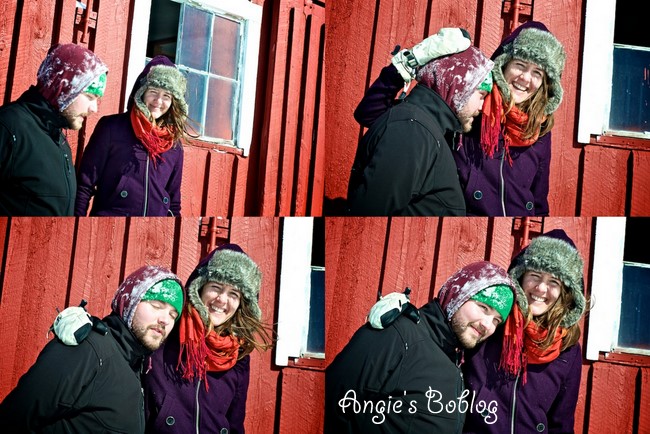 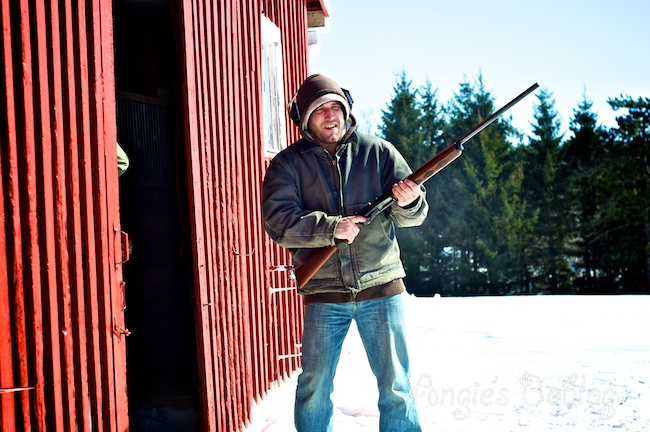 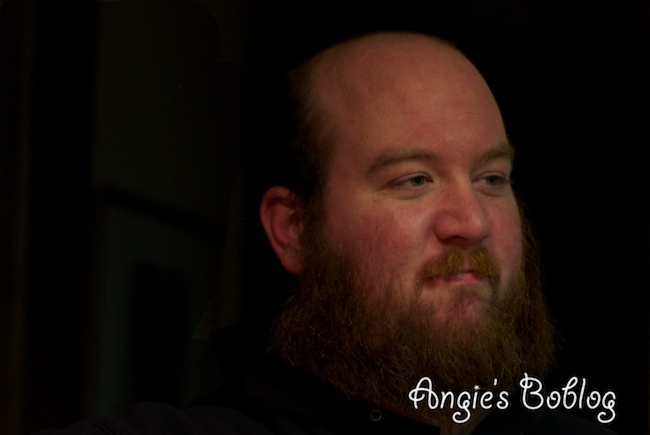 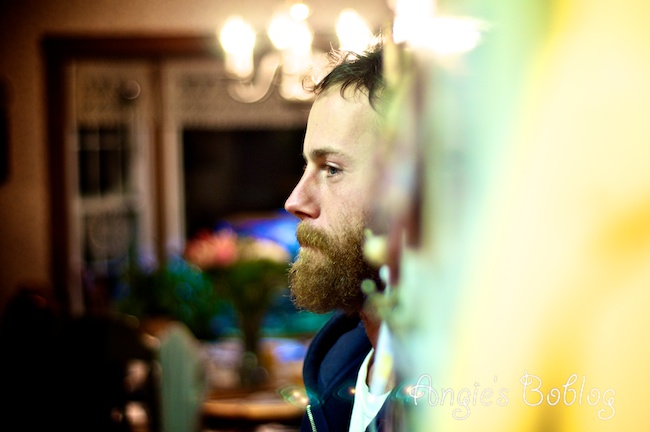 We formed "teams" and made pizzas for dinner. 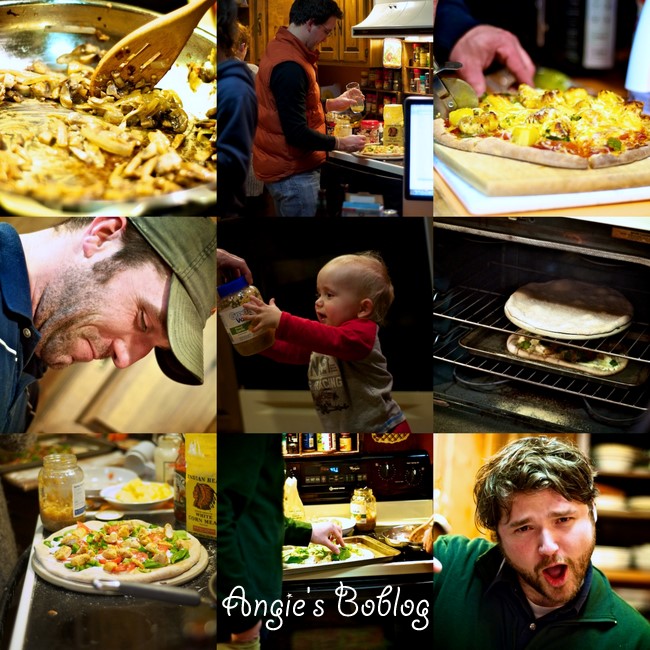 We built an ice cream sandwich cake for dessert. 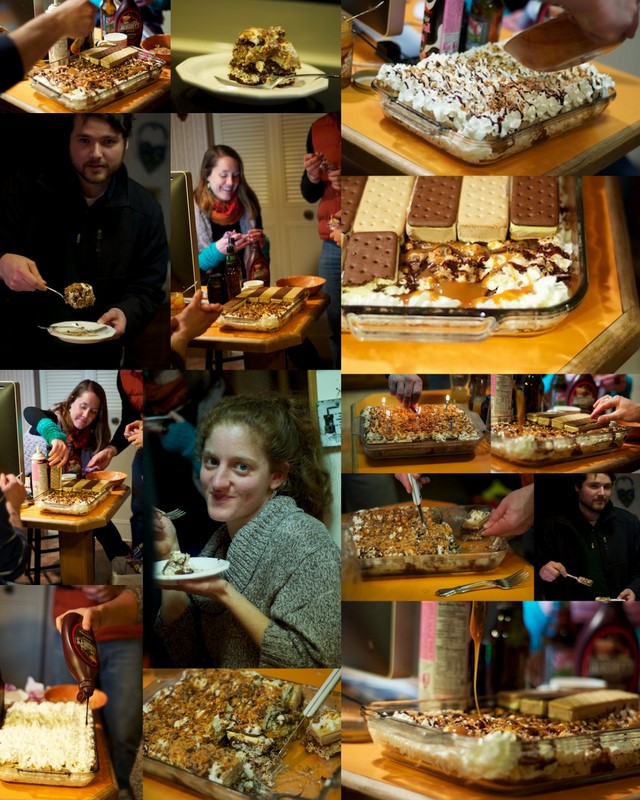 Dan took control over my camera for a while.  It was fun to upload the photos and find this: 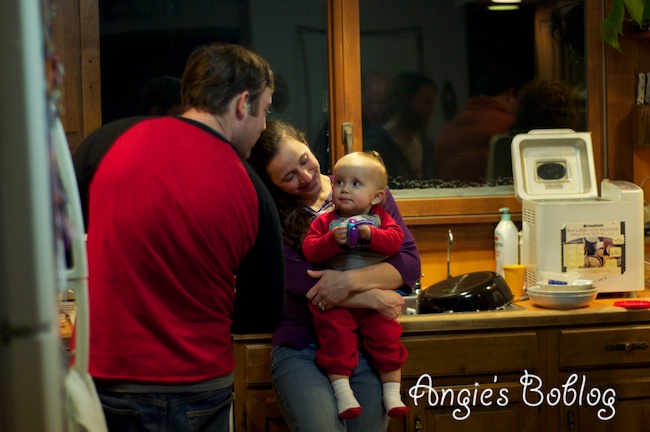 It wouldn't be Ben's birthday without a game of Let's Go to the Races, a VHS horse racing game we found at a yard sale years ago.  To get everyone pumped up I whipped out a jockey cutout photo prop we found a while back and forced everyone to pose.  It was really fun to watch everyone else be the jockey; not so much fun being on the other side. 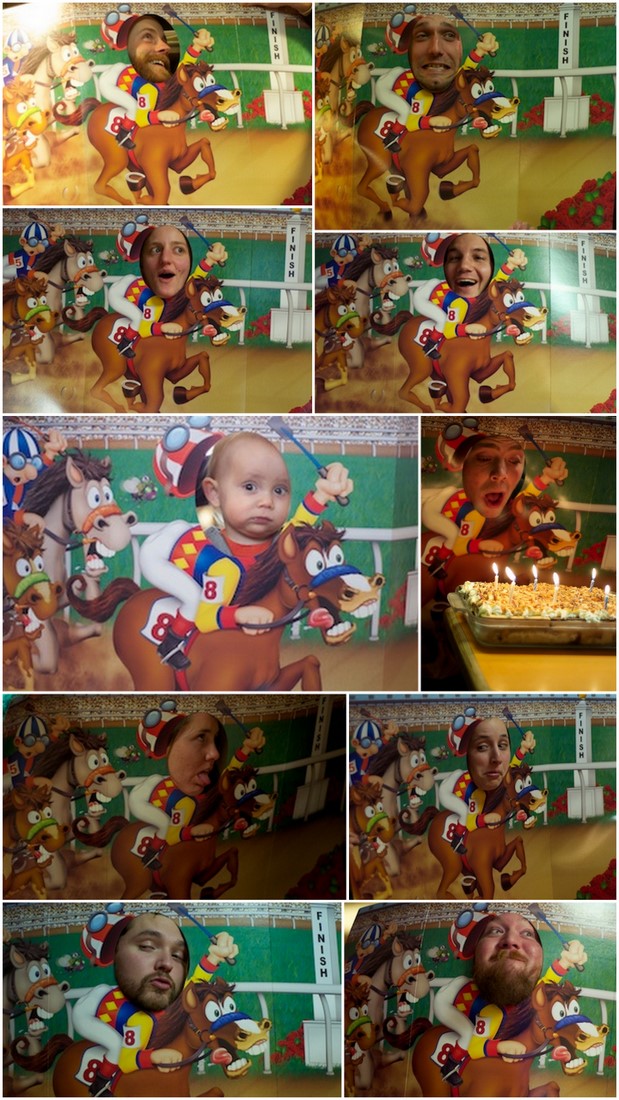 Then we auctioned off horses, placed our bets, and raced our hearts out.  We laughed, we cried, and Bob slept like a champ through all our hollering. 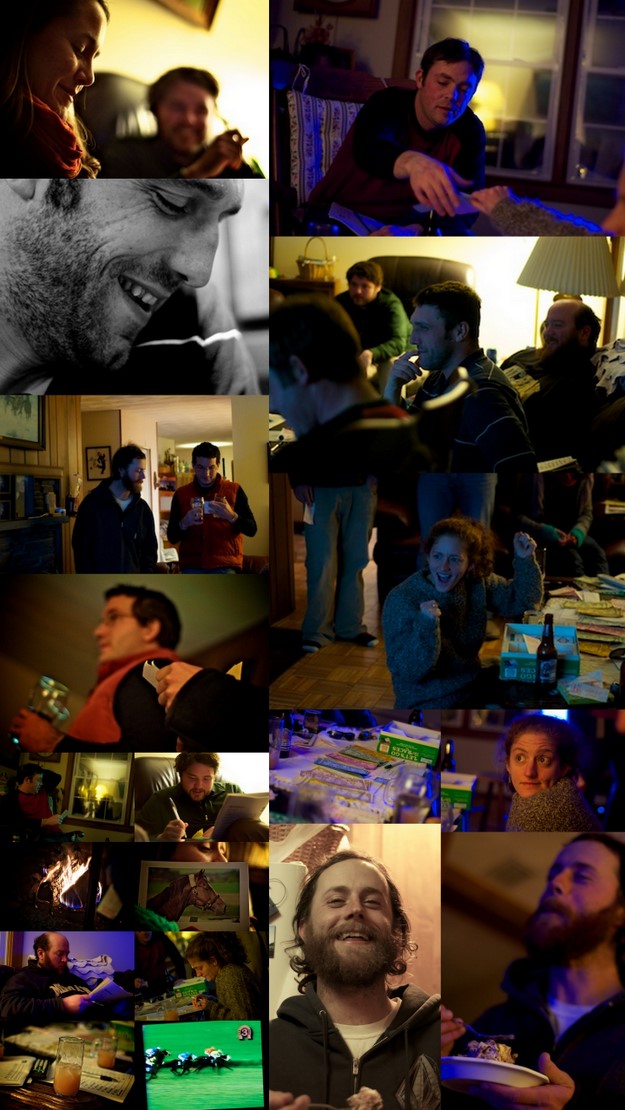 Ben and I saw everyone to their beds and watched the fire for a few minutes before we went up to sleep.
There's no one I'd rather stay up late with.
The next morning we cooked up a huge breakfast of farm fresh eggs with cheese, sausage and bacon from our own pigs, home fries with peppers onions and garlic, french toast, and Panera pastries courtesy of the Zobas. 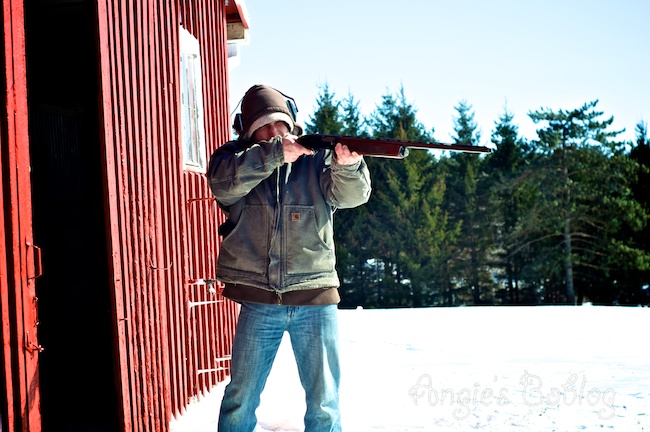 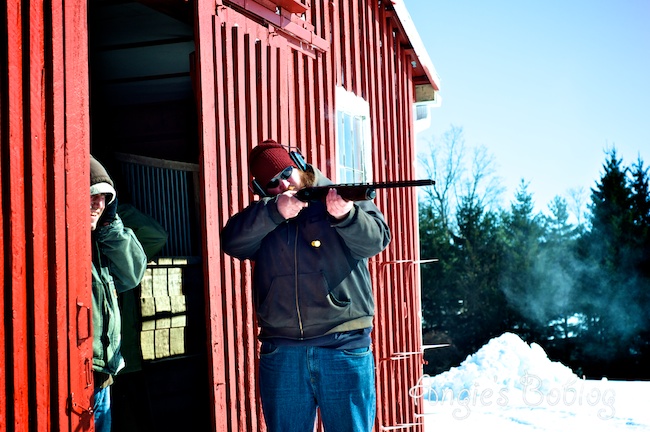 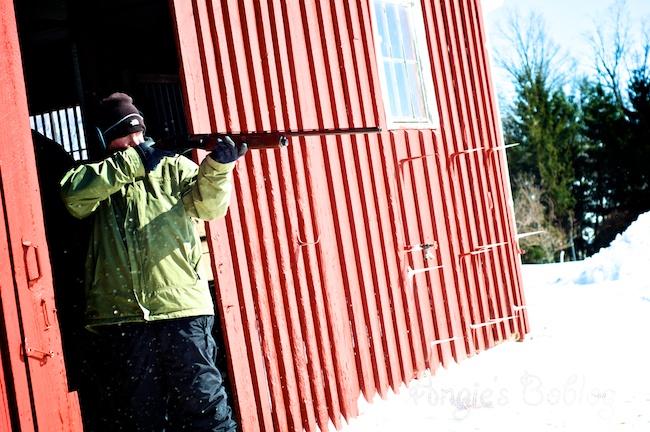 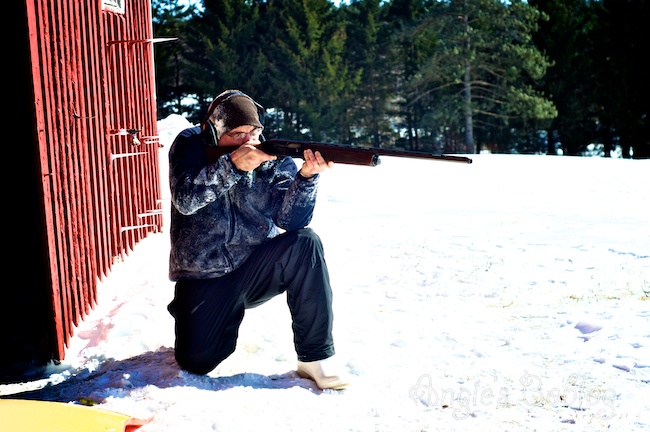 We bundled up to play outside where we tore up jugs with the shotgun and did some serious sledding.  Here's Justin and Ben Z holding hands (or so we thought from a distance), then tumbling over each other in a cute little puff of snow. 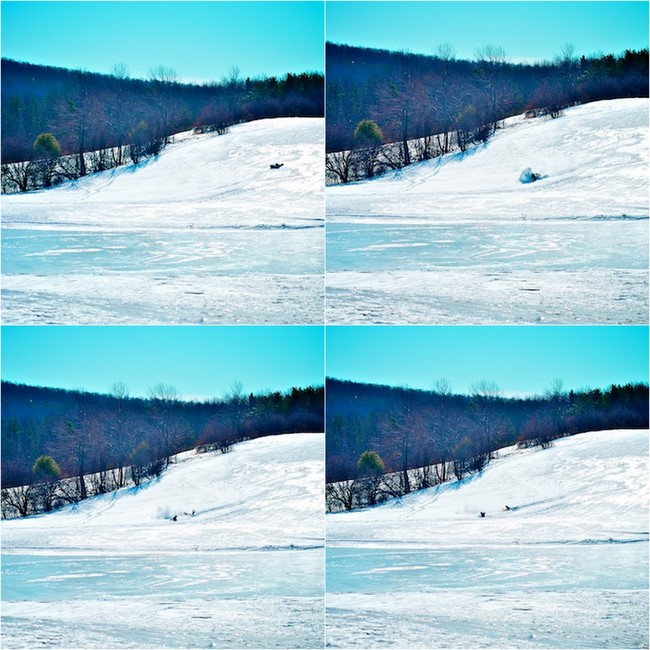 The conditions were perfect for thrill-seeking -- mostly a sheet of ice topped with a dusting of snow.
Ben M and I went for the sledding trifecta, the triple crown -- the three biggest hills one after the other.  We did that one above for starters to get warmed up.  I think we went twice actually.  Then we went for the ultimate -- hiked all the way to the top of the big hill that looks down over the whole property... 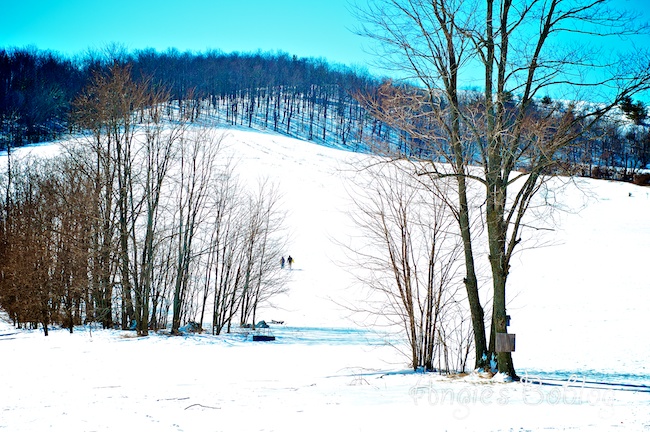 ... then we flew down the crunchy hill, plowing over the occasional bush, straight through the break in the tree line and across all the way to the pond, basically following the path that water flows down the mountain.  It was crazy!  Crazy scary and crazy fun. 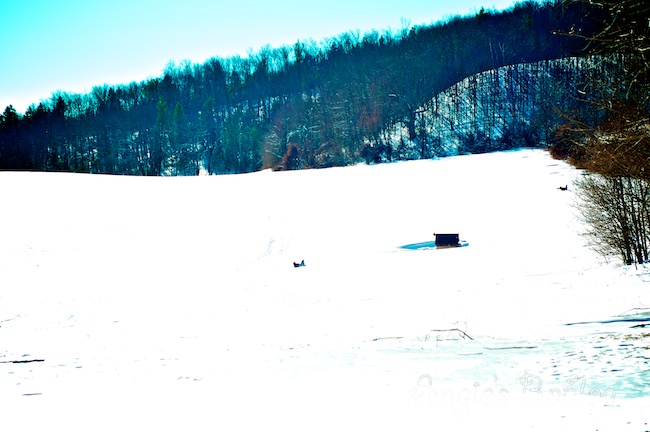 This is my favorite shot from the weekend I think because see that smile on my face?  That's not fake -- that is how extremely happy I was after that wickedly thrilling ride. 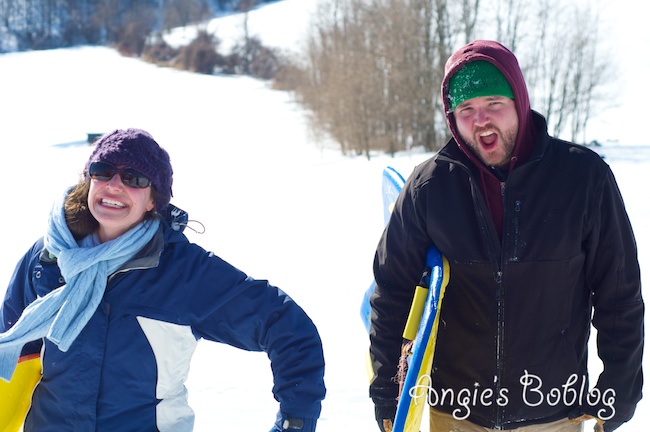 How could we stop after that run?  We went over to the other side of the property and crossed the tree line into the neighbors' land to conquer the most insane hill of all.  The tallest, the steepest, and the way the wind hits the face of the hill, it was practically all one huge sheet of ice.  On the way down, all I could think was, do not fly off the sled.  I was soaring face first down a giant cheese grater made of ice.  I just kept picturing my grated face should I lose control. 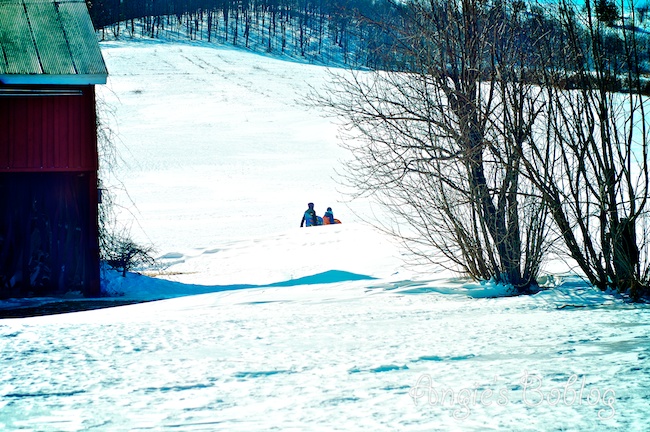 But it was so FUN!  Nothing's really all that exciting if there's no danger involved -- and what is fun if not excitement!  Ben thought we hit 60 mph -- now I'm pretty sure that's not true but it sure did feel like it.

And it was all possible because Stina was such a great friend for Bob.  (Thanks :)

We went back in to warm up and do some dangerous hunting Wii-style.

And then everyone had to leave.  And I may have teared up a little.

I knew Ben felt the same; we collapsed on the couch.  And when we had fully deflated from all the fun I said, "Guess what, babe!  Birthday's not over yet.  Greg and Anna will be here in an hour."

Bob was pretty darn happy to see more friends.  Especially since they brought him a present. 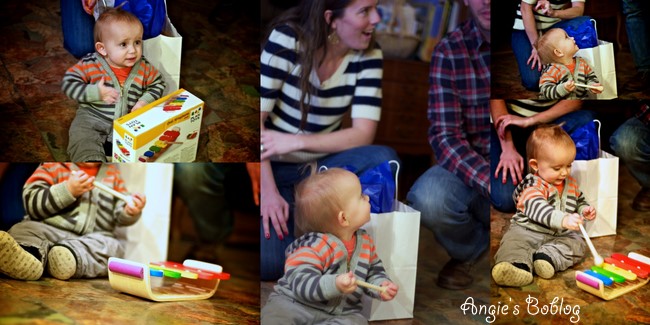 He's such a polite boy; as soon as he realized there was a toy inside he asked with a please ("pee!" + sign in top left photo) for us to open the box.

(Oh yeah, I forgot to mention, the Zobas brought Bob a present, too... 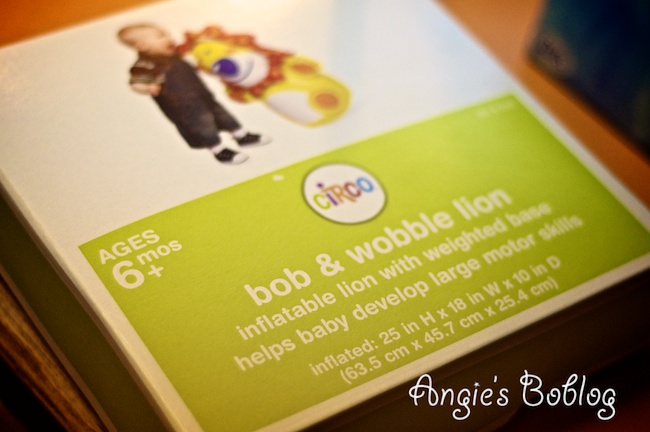 ...which Bob did not get to play with while they were here because you don't need to hear the whole story but the short of it is that I stabbed a hole in it with a screwdriver.  Whoops.  But no worries -- duct tape can fix anything, especially plastic inflatables.  The bob & wobble lion is now bobbing and wobbling just fine.)

Greg--excuse me, Mr. Roaf's goal was to teach Bob a new made-up sign before they left; he chose "read" (even though Bob already says that word, but that's ok): pretend to hold a magazine one inch in front of your face and shake your head rapidly from side to side.  Bob got a real kick out of it and has been doing it ever since.

The next morning when Bob saw Anna again, he pointed at the new toy and then said "ree!" and did the sign.  I love how Bob remembers everything now -- people and things and songs and well everything.  He's a real little person.  Anyhow. 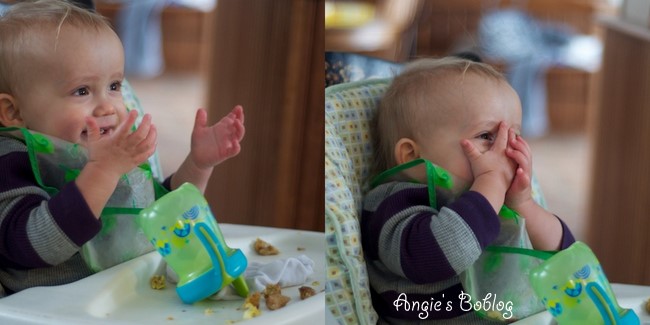 We went snowshoeing and sledding (because that's what you do when you're in 100 acres of winter wonderland)... 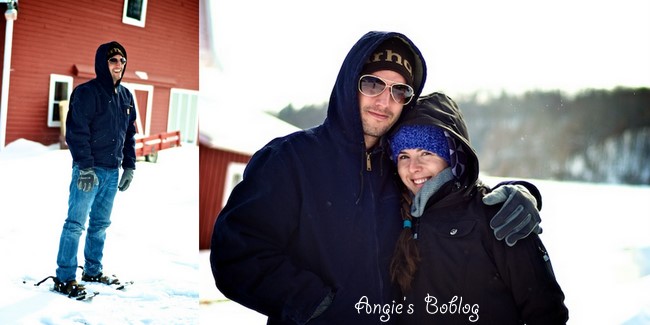 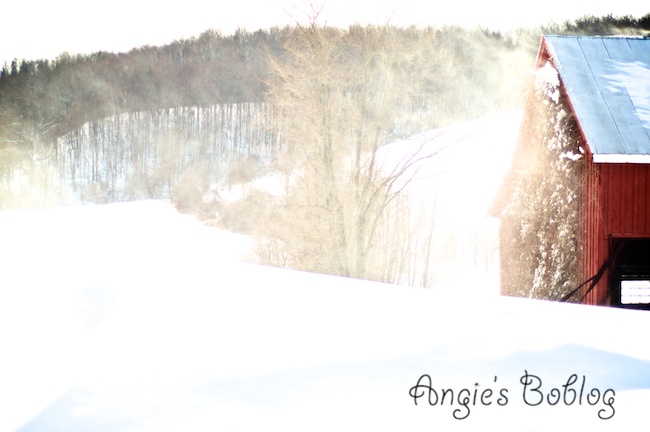 Greg and Anna played with my old Preskool Talk and Play (a big multi-track cassette player with colored buttons you press to switch tracks, it has books to go along with the tapes, such as The Computer Apprentice, seen below.... do you have any clue what I'm talking about?) 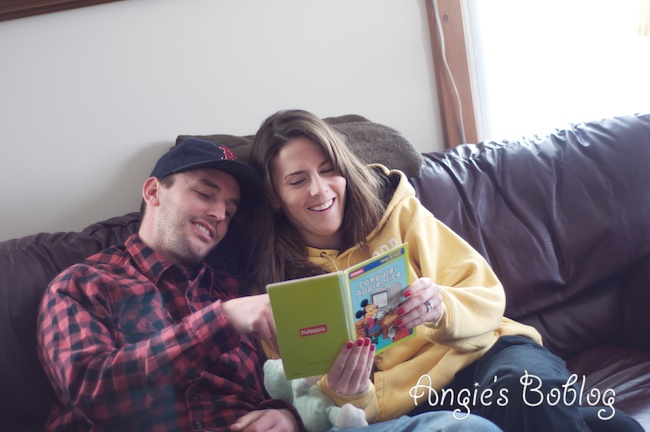 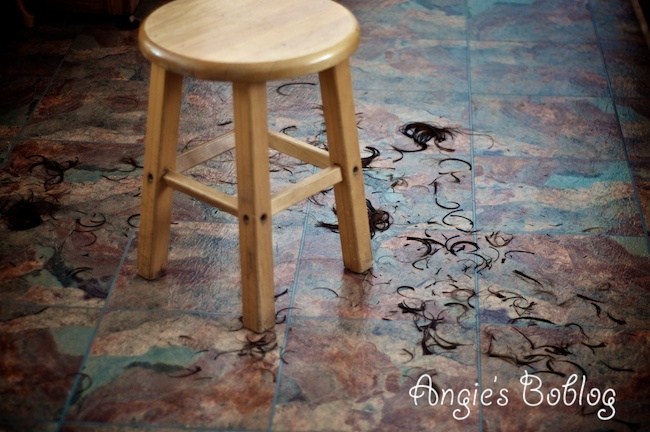 Oh, and of course I had to make the Roafs pose as jockeys, you know, for the birthday of my love.

And that is it.
Now I'm married to a thirty year old.  Aka: someone in his thirties!
Do I feel old? you ask.  In a way, yes.  But in another way I feel young!
Love you, Benjamin.  Happy birthday.
Posted by conveyableflow at 9:30 PM