Random pics from my last import + my random comments thereon 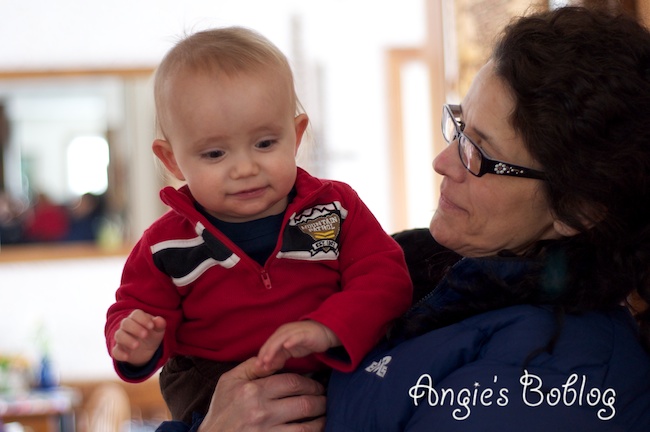 She brought all the old school choking-hazard-style Fisher Price Little Peoples that my brothers and I played with when we were kids.  (The farm's from 1967, the airport is from 1980, and the car garage is from 1987.) 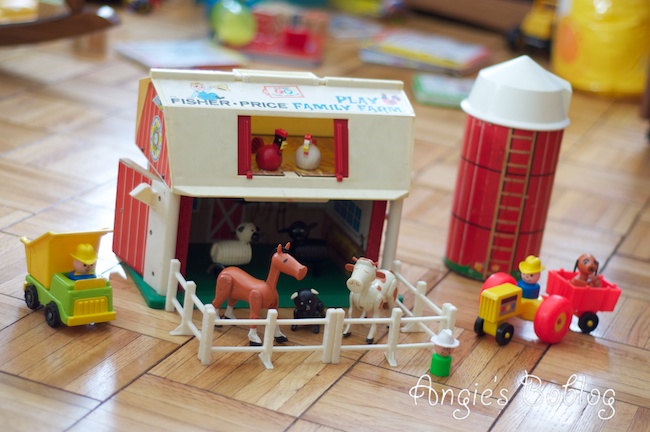 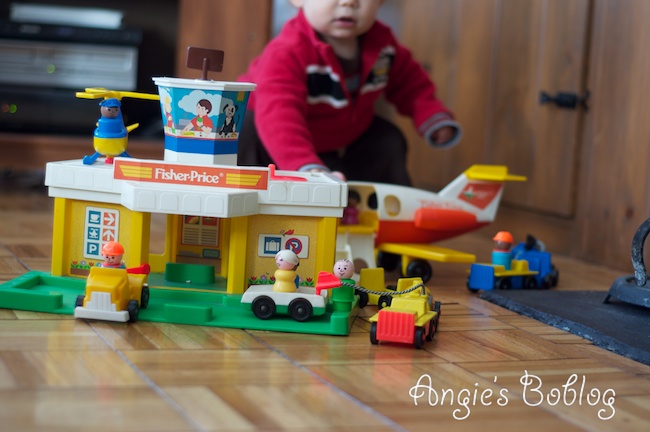 And so do I, since obviously I was the one who set up all these awesome scenes, not Bob, who likes to destroy them before I even get a chance to pretend. 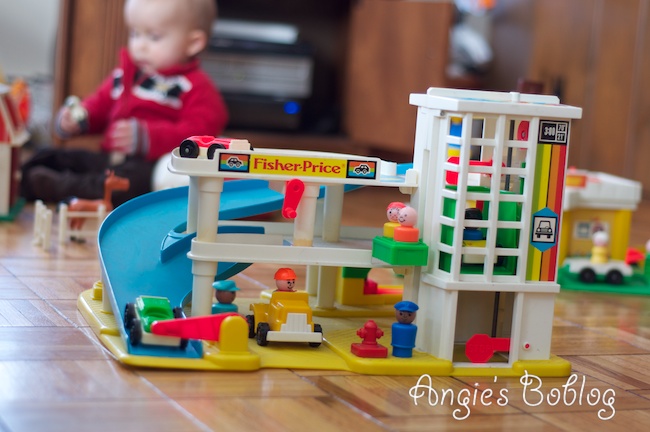 She also brought new shoes into the house, which meant Bob got to practice being a clown.

I take way too many photos of Bob in the bath.  Last night Ben said, "Bathtime is what's making our computer so slow."  I try to take it easy, but Bob is always making the cutest faces in the tub.  And besides, what better do I have to do while lifeguarding than play with my camera? 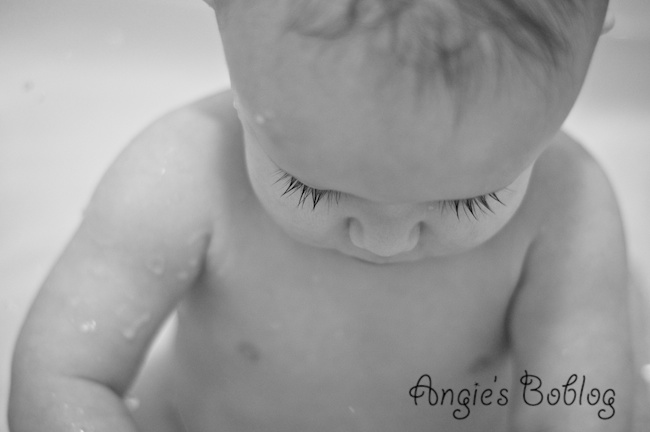 Bob likes to be the Karate Kid.  His best kick doubles as one of his favorite dance moves. 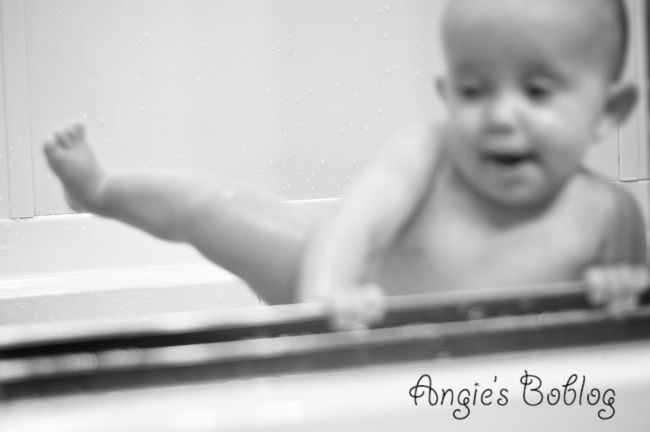 The only problem with tubtime photo shoots is the lighting in our bathroom: it's just plain weird.  I fiddle with lots of editing techniques to make the photos more attractive.  These are black and whites, clearly.  To get good b&w's with the bathroom lighting I use a color curve to improve the contrast, then remove the color afterward.  This is easiest, because getting rid of color means getting rid of the strange hue. 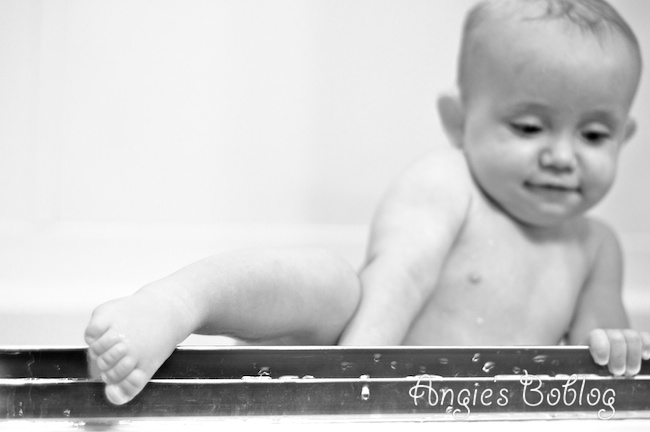 But I don't want all of the tub shots to be completely colorless.  Here's a "faded Kodak" look: 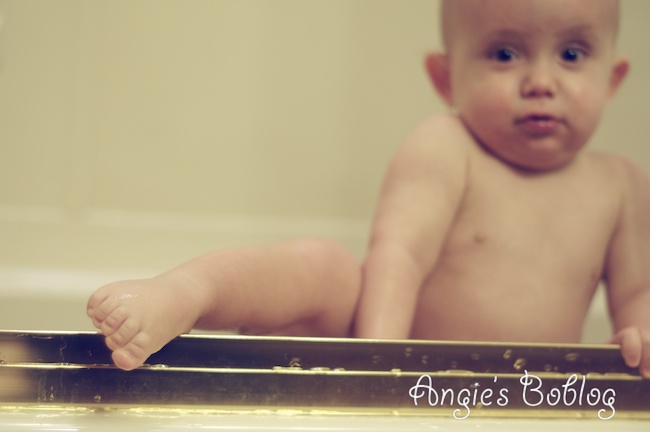 Sometimes I just mess around with the tints and hues... In this one Bob's making his Pluto dog "pee" in the tub. 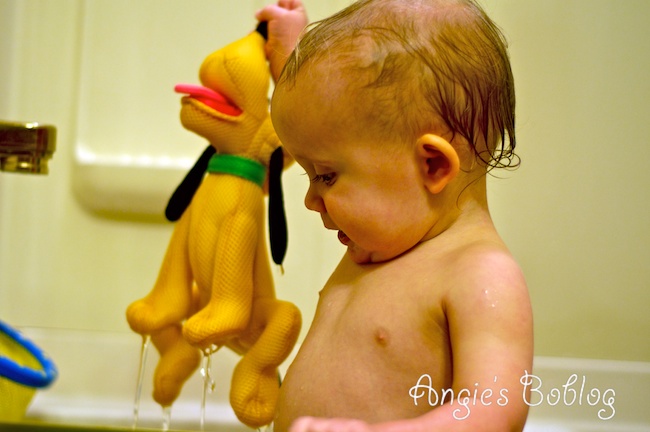 And sometimes I just try something crazy and make our bathroom look green: 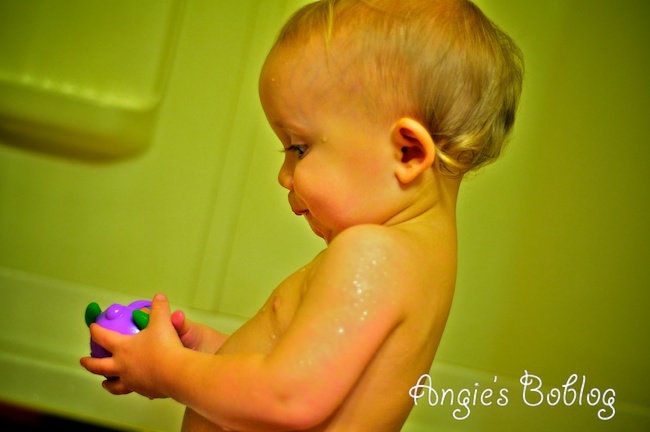 Bobby loves the song "Little Bunny Foo Foo."  He usually requests it by saying "foo foo" and bopping himself on the head. 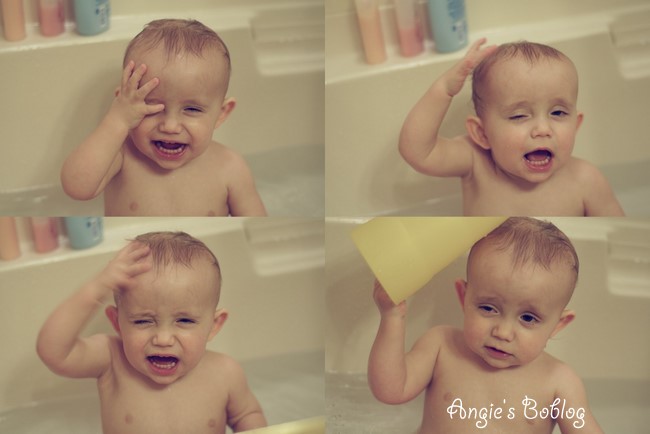 You have to be careful what he's holding while you sing it, because whatever it is he'll bop himself over the head with it repeatedly even if it's hurting him.  He just can't resist.  I'm not going to think about whether that's strange or not.

Bob LOVES peas nowadays.  Mostly I think because they're like mini balls.  Yesterday he ate them with his lunch, then he requested them for snack, then we had more for dinner.  "Pea!"  Here he's having snack at his little snack bar (a stool). 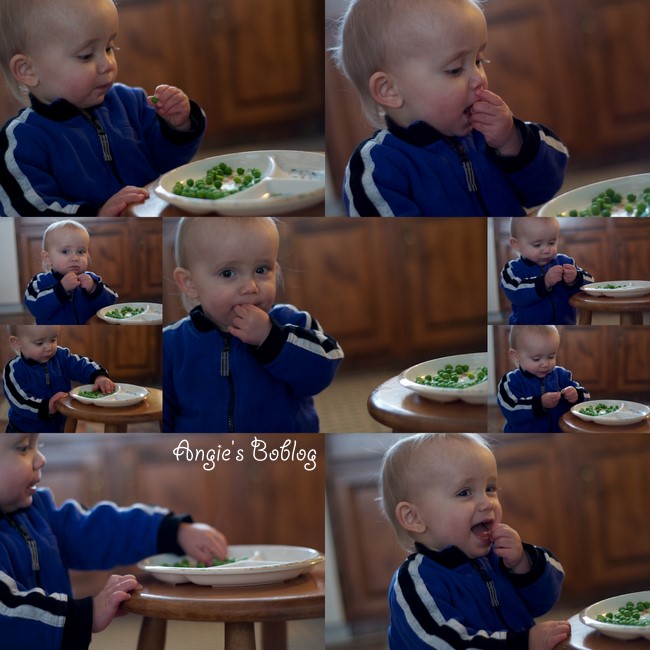 I just love this after-nap cuteness.  On my bed, on top of my new quilt from Tiny Gram, with Sylvester and Wile E. Coyote (how do you spell that?), ready to get changed.  I love this little baby face SO much. 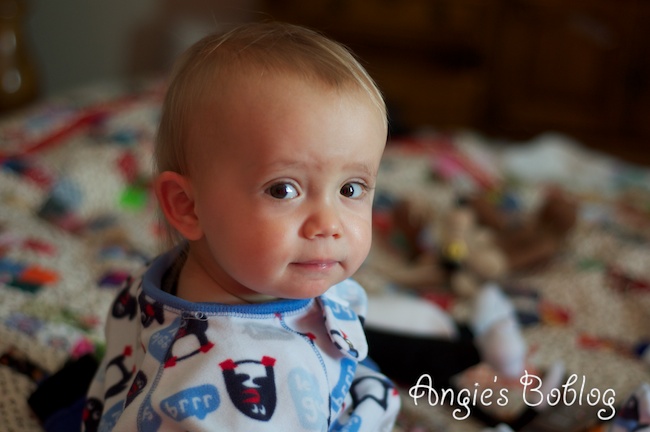 Yesterday Ben had to clear snow during a reasonable time of day for once, so Bob and I went out to watch. 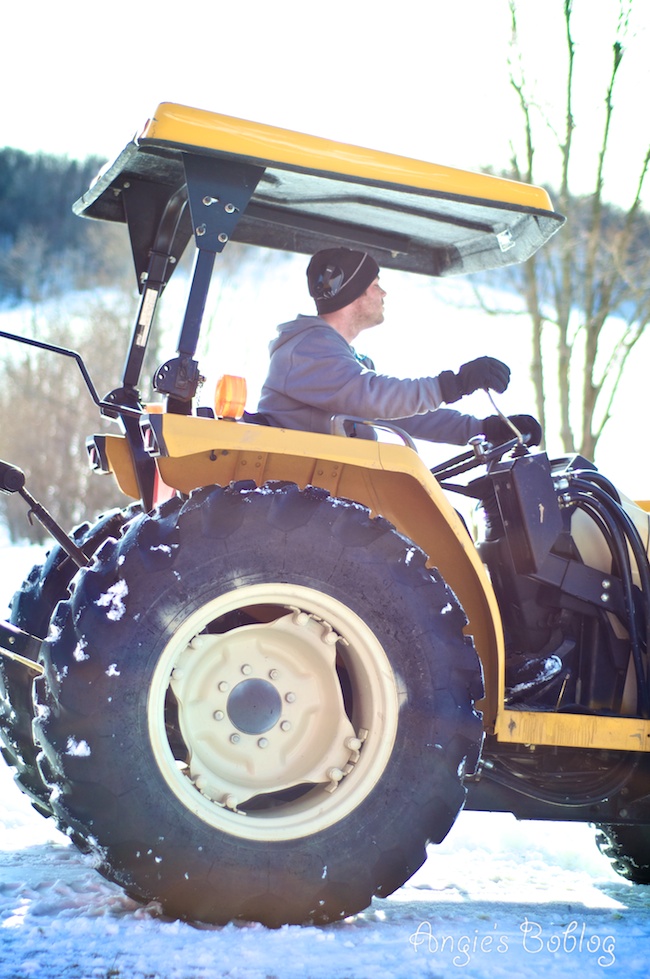 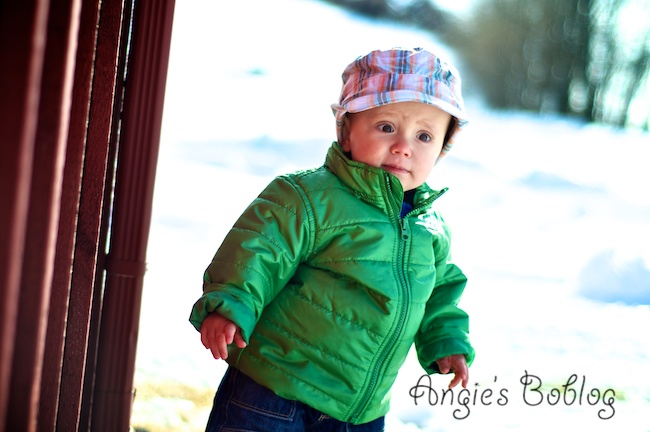 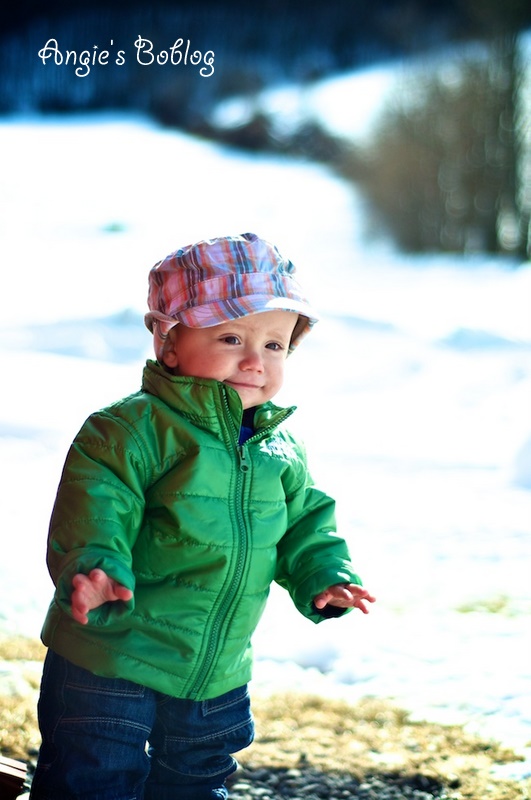 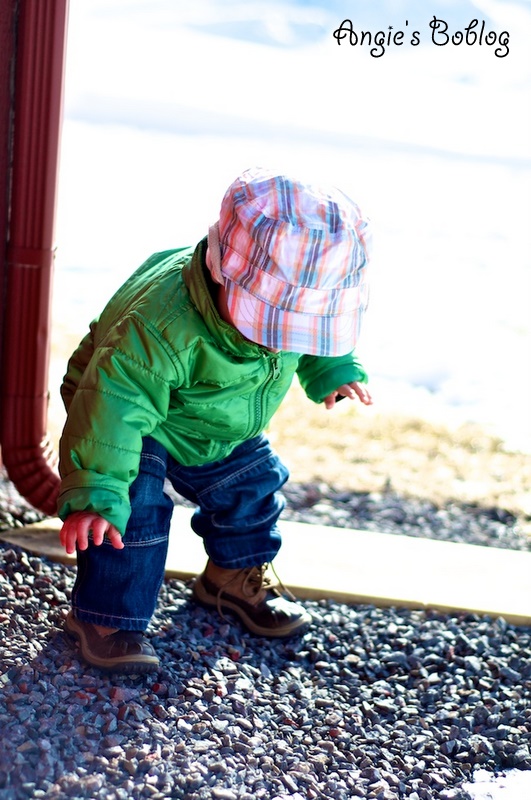 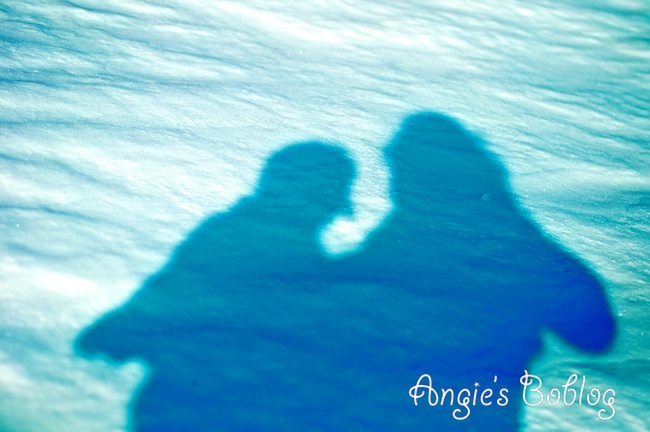 That last one was taken after I put Bobby's mittens on; I love how you can see his little mitten paw shadow.
Yesterday Bob kept tackling his bob n' wobble and hopping it around the house.  "Tack!  Tack!  Hop!  Hop!" 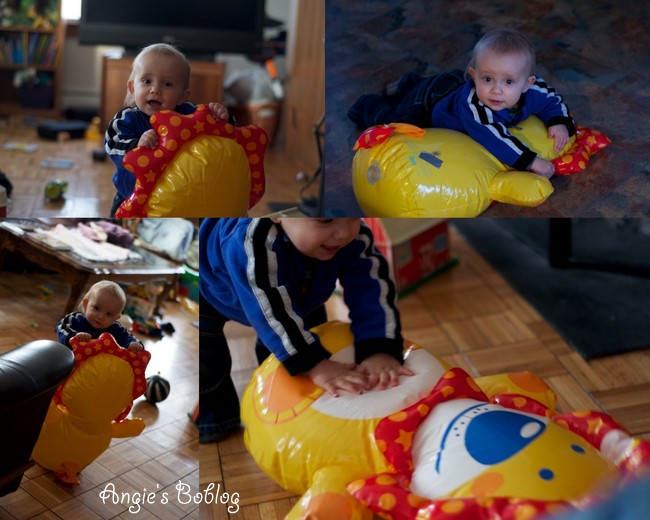 And that's the end of the photos I chose, so that's the end of this post.  No brilliant wrap-up tying everything together, just a bunch of little things to help me remember our life just as it is now, because I never want to forget.
Posted by conveyableflow at 12:02 PM