The truth about "Your Baby Can Read" (in my humble opinion) 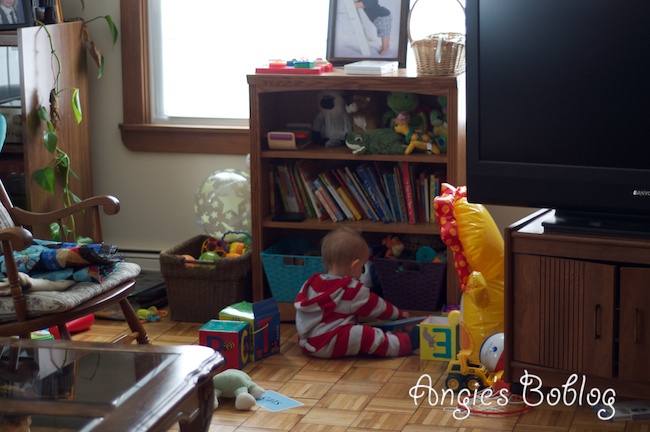 Seriously, I am pretty sure my baby is a genius.  So perhaps his amazing reading is due to Your Baby Can Read, or maybe it's just his superior intelligence.  In any case, here's my take on the now everywhere "Your Baby Can" enterprise.

I've heard critics of the program.  "It's not reading, it's memorizing.  Babies can't sound things out, they can just learn to recognize images of certain words."  Here's a link my mom emailed me a while back: http://today.msnbc.msn.com/id/39953918/ns/today-money/ 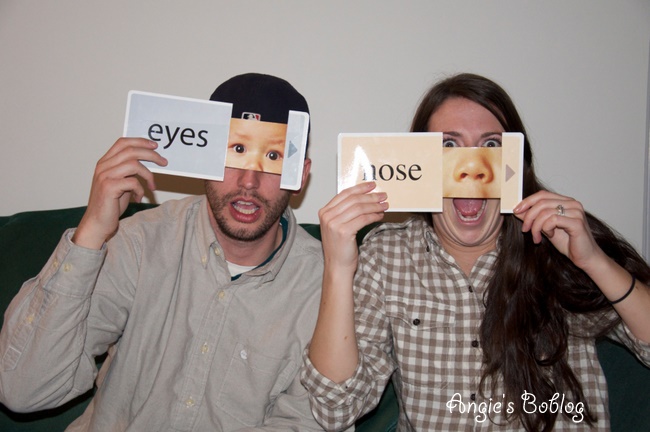 Now, I know that understanding phonics is a very important skill.  And I know that for babies, reading starts out as just memorizing words by sight.  But eventually that's how we all read, isn't it?  We don't sound out every word, we simply recognize the words because we've already learned them.  "Babies' minds are like sponges, just soaking everything up," so it would seem that it can't hurt to introduce words early, right?


Want a break from the chit-chat for a movie?  Sorry the video is so dark; this is late-night footage from two nights ago when Bob couldn't sleep.  Both of the books we read here are being read for just the second or third time.  He can't pronounce all the words that well, but I'm proud of him anyway...


"Your Baby Can Read" is not the only way we're teaching Bob (we do letters and sounds and read tons of books), but it was the first way.  All this strong emphasis on words has made Bob very aware of them, and that is the key I think.  It is easy to point out new words to him, because he is accustomed to studying them.  He only needs to pay attention to a word once or twice and he knows it.  Since that video was taken Bob has already learned "my" and "first" and "friends."


When I ordered the materials after being sucked in by the infomercial, I planned to return everything.  But then, being the procrastinator that I am, I let the free trial slip away and ended up being stuck with the stuff and the bill.  So I decided to make the most of it.


We first started when Bobby was about four months old.  He had no interest in the DVDs or the books, but he LOVED the sliding flash cards (there's a word on the outside and you pull one side of the card to expose a picture on the inside).  Right from the beginning we were shocked at how much attention he paid: he would stare at the word for a second, then stare to the right waiting for you to pull out the picture. 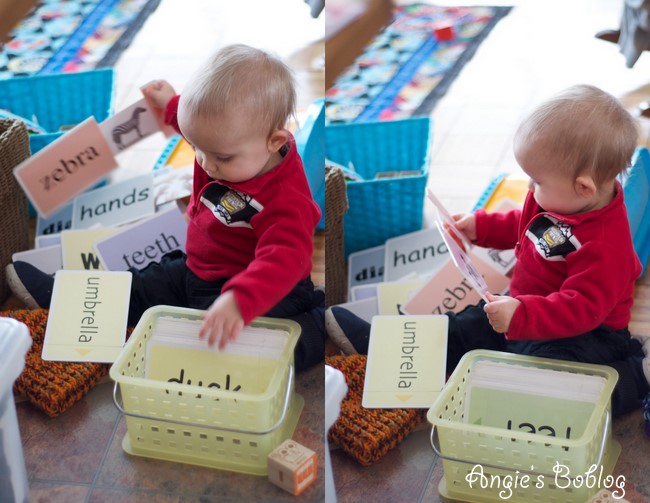 Around six months, we started showing Bobby the videos.  He'd usually watch one 22 minute video once a day, while Ben and I prepped dinner or something.  At first his favorite thing about the movies was Dr. Titzer's daughter Aleka who would pop up at the beginning and say "hi!"  But he also enjoyed the songs and animals and believe it or not, the big words on the screen.


We continued that way, Bob watching the video usually once, but not every day, and occasionally twice, but not often.  Most days we'd do the sliding flash cards because for a long time that was Bob's favorite thing to do.  On the infomercial I got the sense that Bob should have started pointing to his body parts or copying motions or something, but he never did any of that.


One day when he was about ten months old it occurred to me to test him to see if he knew any words yet.  I put out three or four flash cards and said, "Bob, can you find the word 'ball?'"  He crawled straight to it.  He also picked out "dog" the same way.  After that first test, he kept surprising us with how quickly he learned more.


Before Bob was one, we started writing on a little dry erase board that came with all the reading stuff.  I was totally shocked that Bob could just as easily read the words in my handwriting as he did on the cards or the video.  We added word after word to Bobby's reading vocabulary just by writing it on the card and showing it to Bob.  And of course, to him it's all just play -- he would prompt our "testing" more often than we would.


By now I have absolutely no idea how many words Bobby knows.  It has to be a hundred or more.  Some of them he can read out loud, some he signs, some he doesn't make a sound yet but you can see in his eyes that he knows what they say.


He doesn't only recognize words when they're all alone and thrust in front of him, either.  He sees words on packaging, in books, in stores... The other night at dinner he pointed to the brand logo on a bottle of Italian dressing and said "Bone."  And that's just a word that randomly appears in one of his dozens of books, it's not on any of his flash cards. 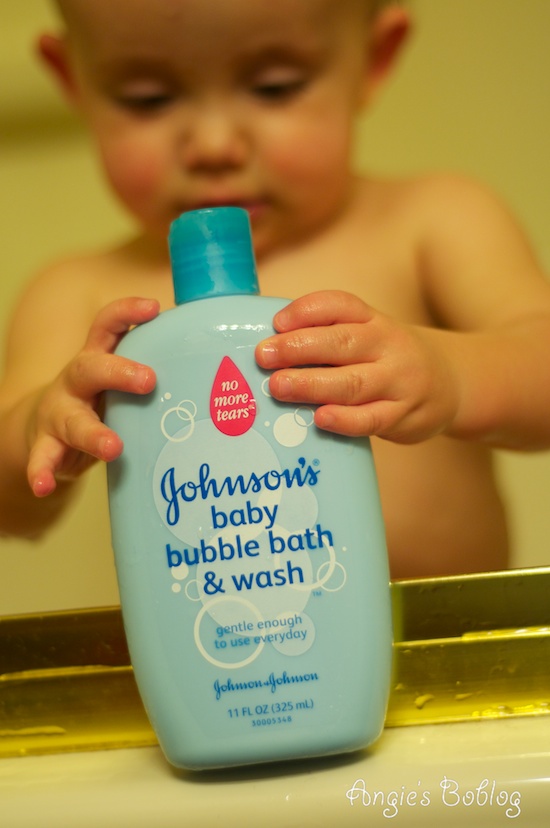 He's starting to read phrases, like, "holding hands" or "kick the ball" but we're still working on the concept of reading words in a row.  At least out loud.  Who knows what's going on in his head.

When friends ask me, does it really work? I say, Yes!  But honestly, who really cares if babies can read?  There's no real need for Bob to read at this point.  Obviously.  I don't send him into the grocery store with a list while I listen to the radio in the car.  And perhaps the experts are all right about it not being "real" reading, but here are the reasons I like the program anyway: 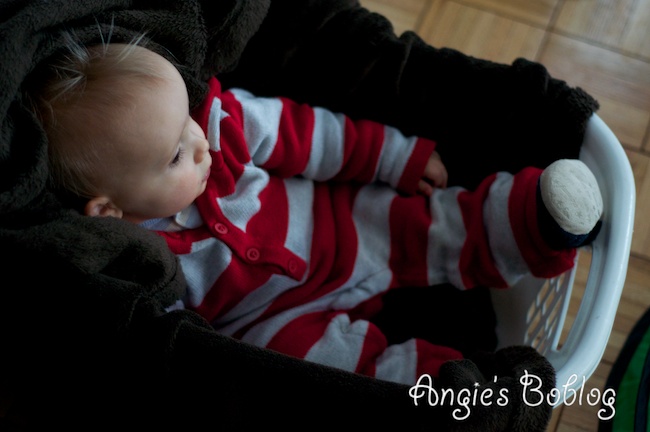 chillaxin in a laundry basket recliner while he watches his show

1.  I don't want Bob watching much TV, but sometimes when he's in need of a rest but not wanting to nap (we're transitioning to one) or if I just need to entertain him so I can get something done, it's nice to set him up in front his "read show."  And if he's going to watch a video, he may as well watch something with real kids, songs, and something that teaches him about words, rather than a stupid cartoon or something.  (That being said, the DVDs are super cheesy -- I am quite sure I could make something better myself.  My biggest fear is that Bob will be tone deaf because Dr. Titzer's daughter sings half the songs and... well let's just say she's no Shirley Temple.  Or Hannah Montana.  Whatever.  Bob doesn't judge.)
2.  Bob likes it.  He likes the flash cards, he likes the movies, he likes the books.  And any activity that Bob continues to enjoy no matter how many times we do it is a gem, because lots of his toys get old quick.
3.  Memorization, phonics, and being read to are the main ways to learn to read.  And we do them all, because, why not?  We're not forcing Bob to learn things he doesn't want to -- to him, it's all in fun, and it's just one of many things we do every day.

That there to the left is what I got suckered into buying.  I'm not saying you should buy it; I'm just saying.

If you have seen Bob's reading in action, please feel free to post a comment as a testament to his genius.  One random commenter will win an autographed photo when Bobby is named smartest baby in the world.
Posted by conveyableflow at 11:24 PM