My Gordon friend Lindsey wrote about television recently.  And now I'm going to.  Not necessarily because she did, but I'm just saying.

First off: superbowl.  Generally nothing makes me more ashamed of our country than watching the superbowl.  I could have told you that Christina was going to screw up the national anthem.  Seriously, I would have rather heard a kindergartener sing it; at least the five year old would have gotten the words right (and probably would have been closer on the melody, too).  Her response: "I got lost in the moment... I hope people could see how much I love this country."  No, you got lost in yourself.  And yes, we could see how much you love you.  Superbowl commercials: I find the fact that people care so much about the commercials even worse than the commercials themselves.  Except GoDaddy.  Sorry, Leann, if you ever happen to read this, but I find the use of sex appeal to sell web domains both unnecessary and disgusting.  The half time show: can people who like football even stand the artists that usually perform at half time?  I kinda like a couple of Black Eyed Peas songs, but Fergie's rendition of Sweet Child of Mine was possibly the most offensive noise I have ever heard.  And this is all besides the crazy obsession with football and sports in general, about which the talking heads go on chatting 24 hours a day.  But at least we don't have to hear so much about Brett Farve anymore.

Television in general: I guess I have to say I like it.  While I'd probably argue that reading a book is a better use of time, reading is also rather isolating.  You can't share a book with your loved one like you share a movie or show.  Plus, vegging out in front of the TV is just so darn relaxing.  The only thing I really can't stand about it is advertising, but with DVR and Netflix on demand via the Wii, you can almost avoid it.

In these winter months with little to do, Ben and I have been watching quite a few shows.  I'll tell you what they are in case you're looking for something good to watch.

Our favorite is Thursday nights on NBC: The Office, Parks and Recreation, and 30 Rock.  All soooooooo funny.  Steve Carell, Amy Poehler, and Tina Fey are geniuses.  Thursday is easily our favorite day in the winter.

We've also been watching some American Idol (can't lie, whatever, it's entertaining) and Gold Rush on the Discovery Channel.

We just finished watching all eight seasons of 24 on Netflix.  Don't even try to add up the total number of hours because I don't want to know what it is.  I have purposefully NOT let my brain do the simple multiplication required.  That show is darn addicting.  I'm glad it's over.  But I'm also glad I experienced the 24 phenomenon, albeit 10 years too late for anyone to care.

Our new Netflix series is Modern Family.  Wasn't sure I'd like it, but so far I'm giving it an A.  Hilarious.  ("Hilarious" the slang term; it's not literally driving me insane.)

We DVR all episodes of 19 Kids and Counting, and if we're ever feeling super lazy and want to watch TV in front of Bob or during dinner or something, that's what we put on.  Bob loves watching all the kids, there's a zero percent chance of anything inappropriate appearing, and it's less annoying than his "read show."

More about the "read show" in the future... 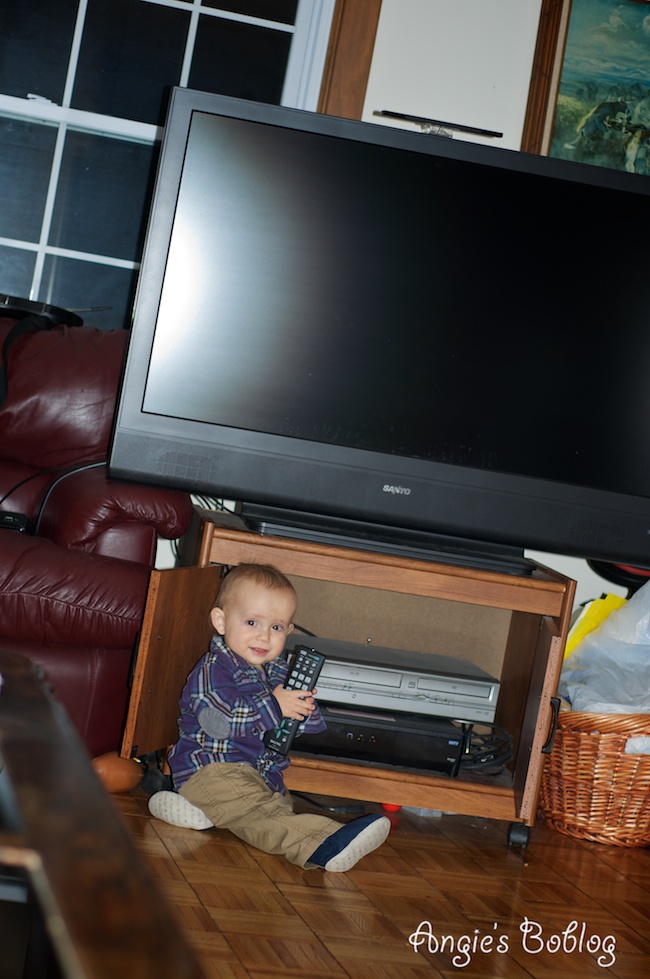 Trying to figure out how to turn on his "read show" for himself.
So... what do you watch?  What awesome shows am I missing?
Posted by conveyableflow at 12:09 PM

Email ThisBlogThis!Share to TwitterShare to FacebookShare to Pinterest
Labels: rants