It's transition time around here.

My babyboy is totally for real making the leap from baby to kid.  It's a strange feeling.  When you think about baby growing up in the future, it's heartbreaking in a way.  It feels like you want him to stay little forever.  When the milestones actually occur, though, it's so exciting!  You feel so proud and even more in love than you thought possible before.

Anyway... Bob's growing up in major ways around here.  I know everyone's anxious to know how the potty training went -- I've received lots of inquiries -- so I won't delay.  We did it.  We came out unscathed.  I almost wish we had gone for it sooner, but really I think we timed it just perfectly.

And, um, here's a WARNING for you... if you don't like reading about poop, you may as well turn back now.  It's gonna get a little graphic because, the family wants the details.

The morning after my "no more diapers" declaration I had almost forgotten about it but the first thing bob said when i got him up was, "No more diapers, mom."  Seems my speech affected him.  Off to a good start.

I put some superhero undies on his tiny bum and explained the rules.  "You have undies on now -- no diaper.  You CANNOT pee in your undies.  You ESPECIALLY cannot poop in them.  Every time you pee or poo in the potty, you can pick a marble out of my bag and put it into your jar.  When your whole jar is filled all the way to the top with marbles, we can go back to Imperial Bowl!  Got it?"  "Yup."

I read Sarah's potty training method and advice.  Basically what I got from her was: Dive right in; don't do it half-way; be consistent.  Stay positive always and never scold.  It's a lot to learn so try to teach him what the body is doing and what he needs to do.  I added in the marble-jar-bowling motivator bit, because bob was in serious need of motivation. 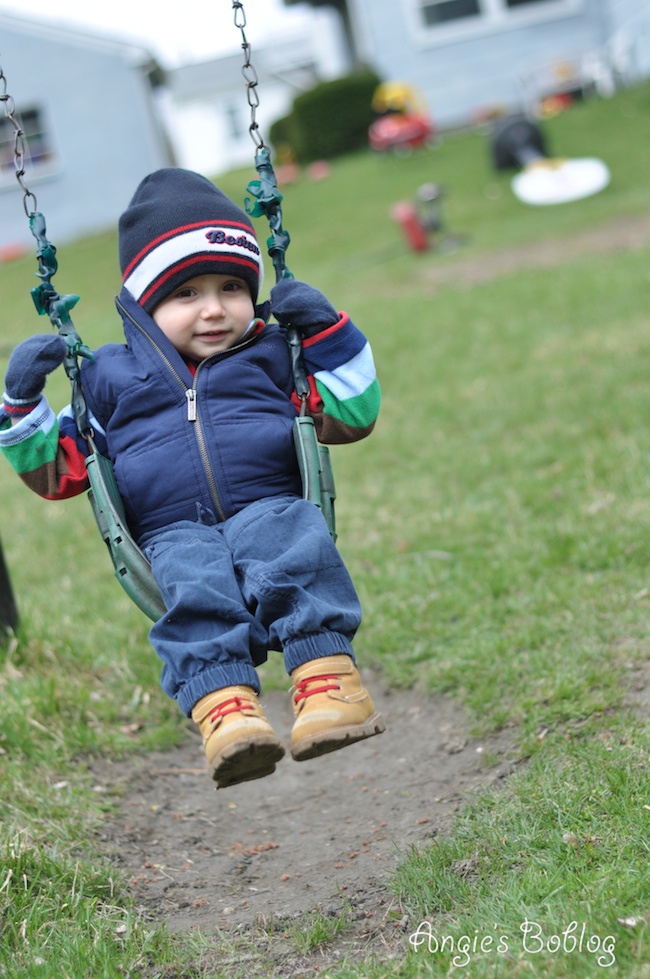 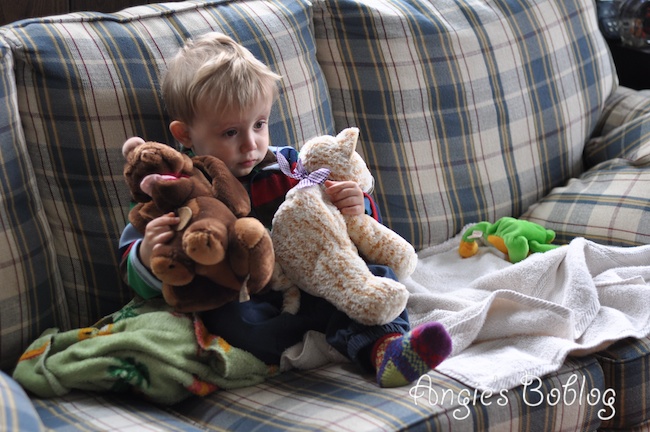 and all the while I asked him every five minutes if he needed to use the potty, and every twenty or thirty minutes I forced him to try, even if he didn't "need to."  (Which he never does, until something's on it's way out.)  No accidents that first day!  Put on a cloth diaper at nap and night.

That night, around 9:50 PM, we had another development: Bob finally climbed out of his crib. 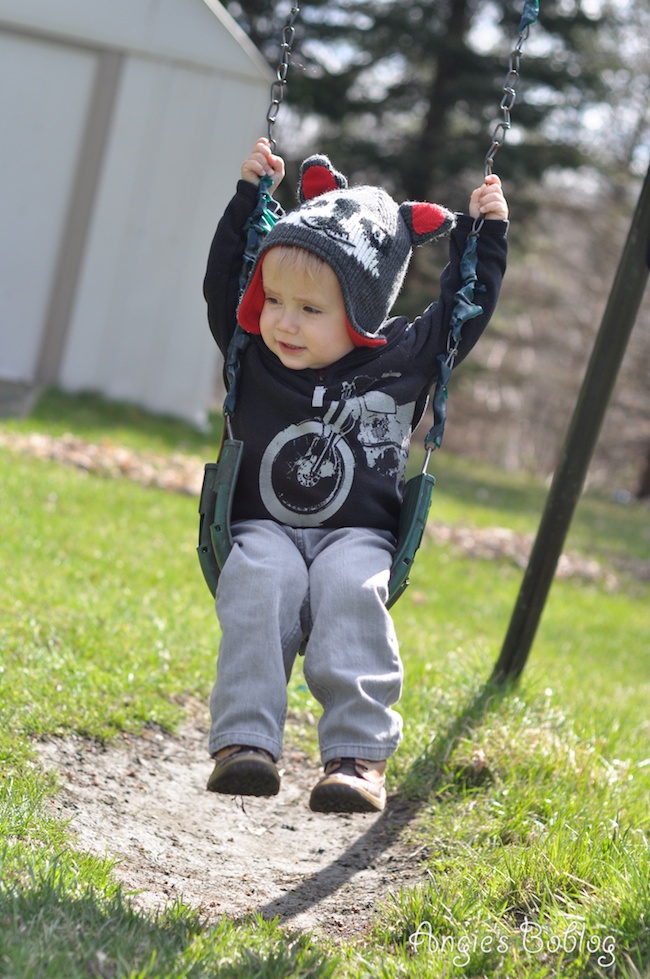 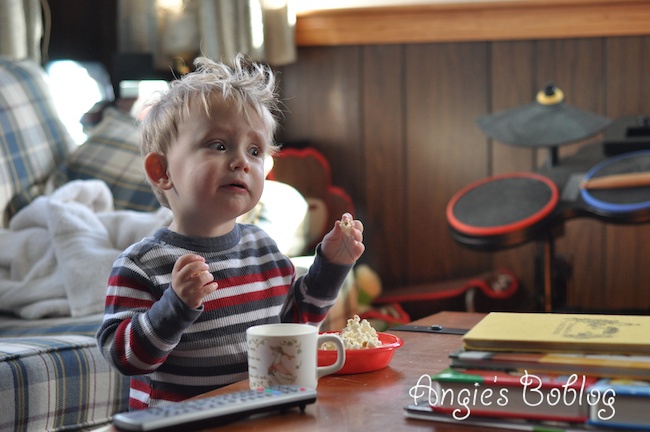 Except I didn't make him try to go quite as often, and we did have a couple of accidents. 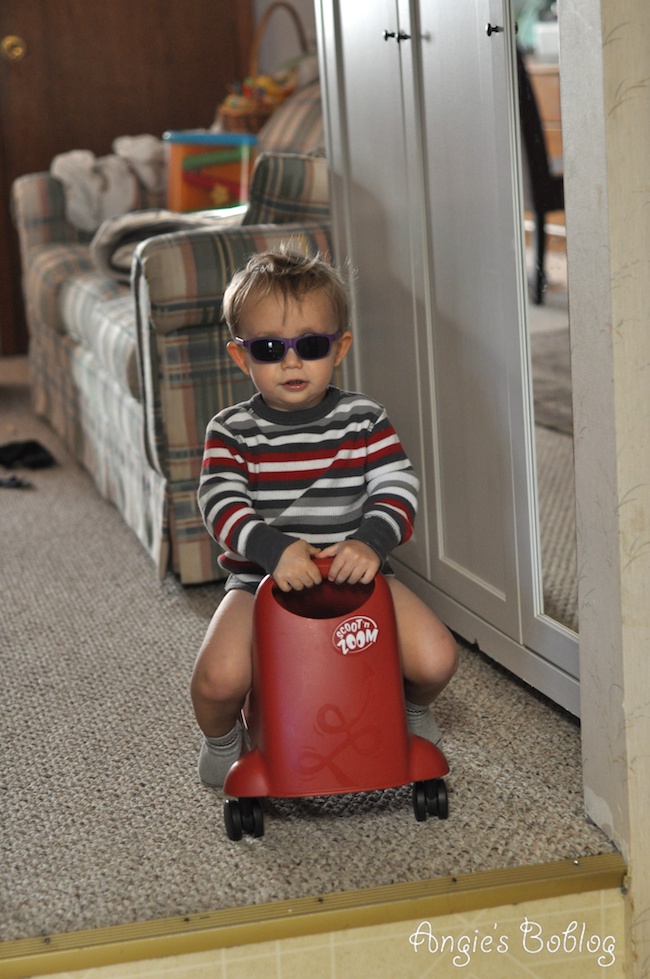 Peeing on the potty was no problem from the start, but pooping was another issue altogether.  We spent a lot of time on the potty trying to coax out a number two. 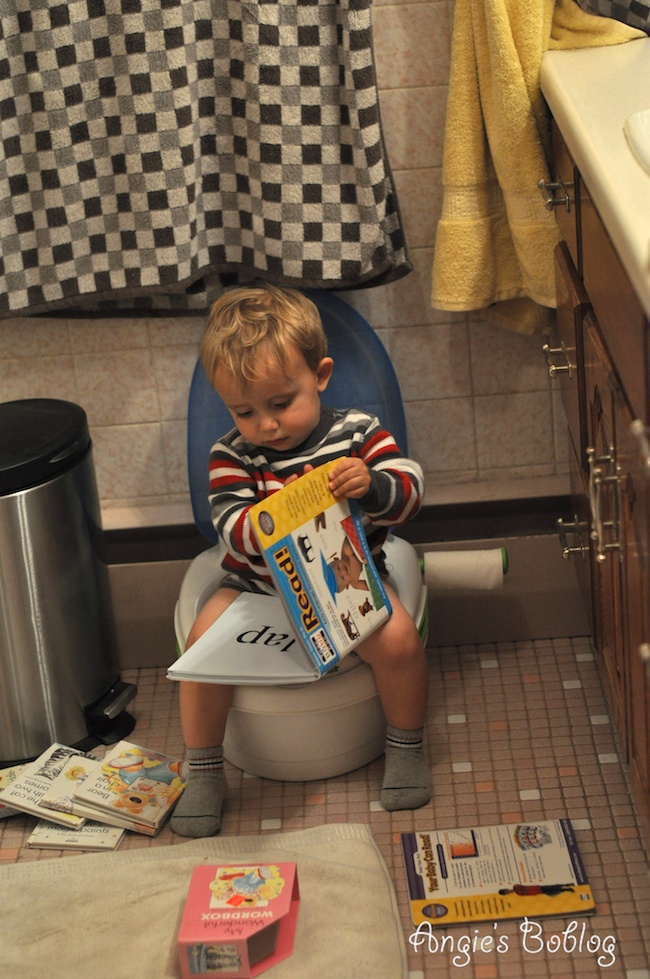 
By day three, the jar was already full.  Yep, should have used a bigger one. 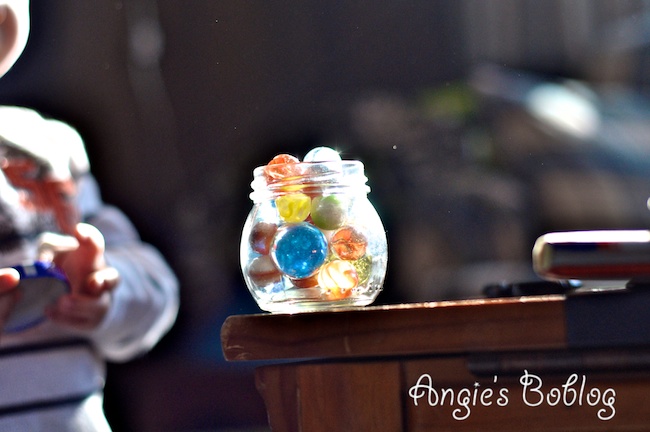 Climbing out of the crib continued to be an issue. 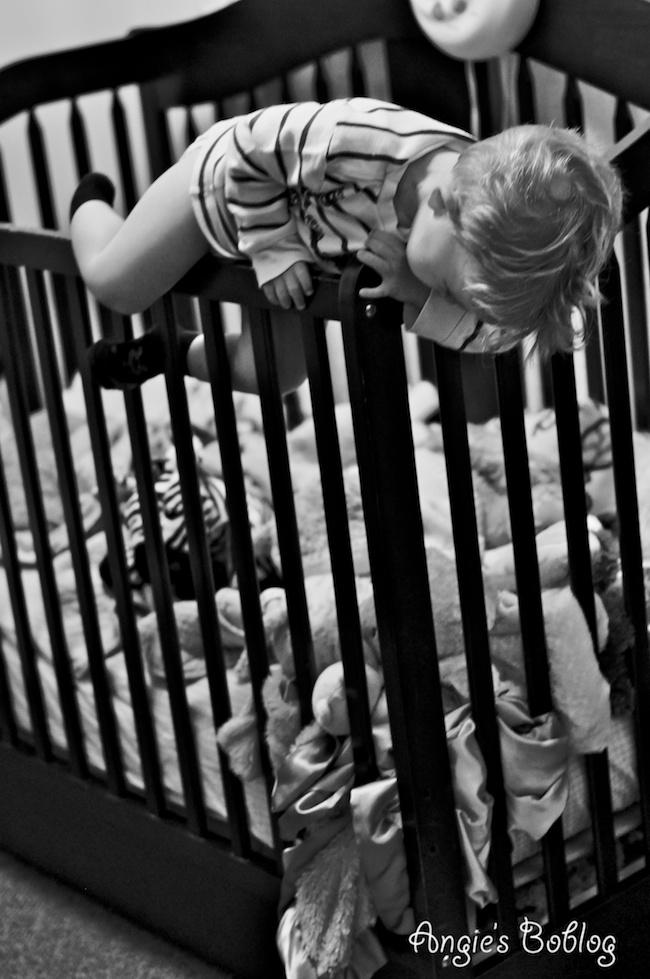 But really, you can't be potty trained while you're locked in a crib.  Just doesn't work, right?  So it was time to convert the bed anyway. 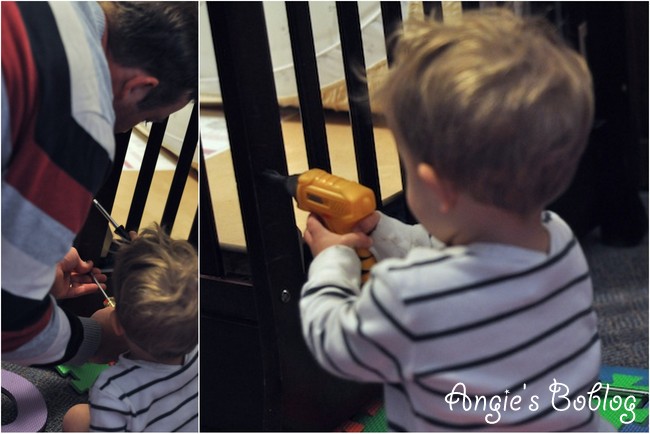 Bedtime is pretty sweet with a bed as opposed to a crib (yeah, it's actually just his crib with one side removed).  Instead of reading books on the rocking chair we now snuggle up to read on the bed.  Which may or may not break because I'm too heavy.  (Dad, can you come over and reinforce the base for me?) 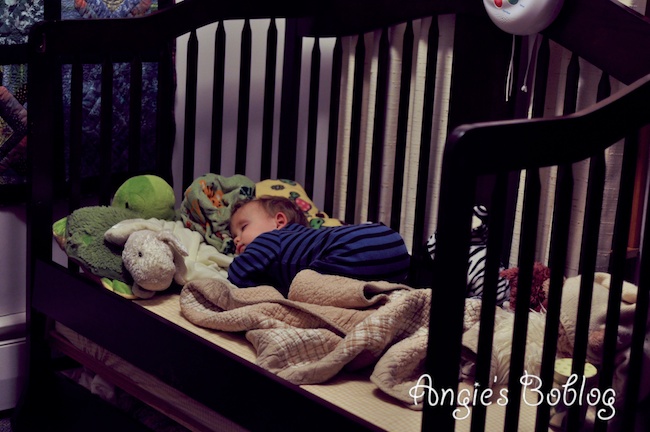 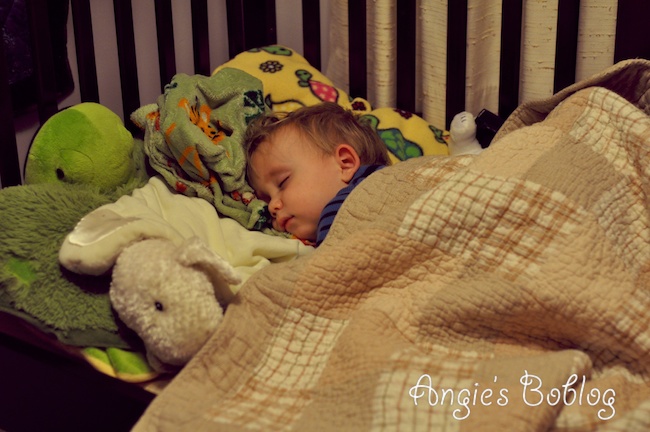 It's also cute to be able to sit next to my boy and kiss his little face in his sleep when I check on him before I go to bed at night.

Bob lost a few marbles while playing with them, pretending they were "hundreds of cats, thousands of cats, millions and billions and trillions of cats," so we were able to put off the trip to Imperial Bowl a bit longer. 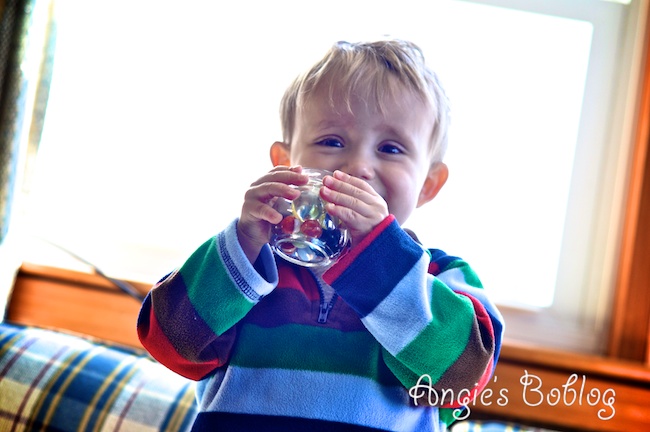 This day, since he'd finally be in a bed not a crib, I decided no diaper for nap.  Laid down a couple of towels just in case.  Told him he could get up if he had to pee.  Napped without wetting.  Success. 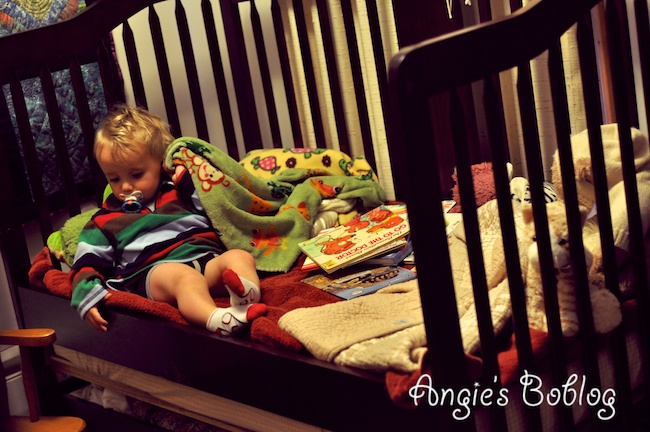 Pretty much the same.  Still no poop on the potty.  One of these nights he pooped in his diaper.

Bob finally gets to return to Imperial Bowl!  We brought Uncle James and Bailey along to share in the celebration. 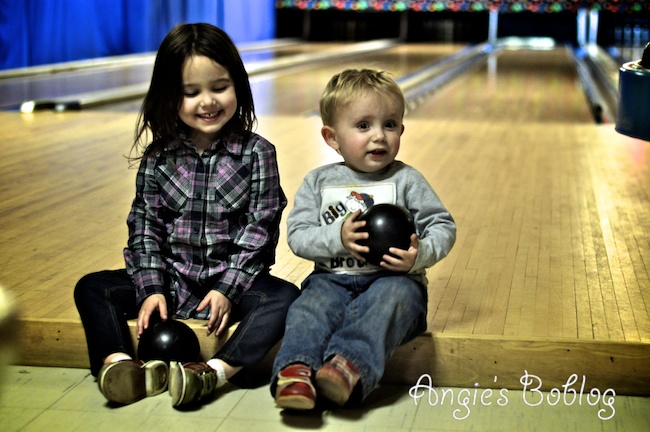 And that night when I started putting a diaper on bubbs he said, "No, I don't want a diaper, I want undies!"  Sounded good to me.  No diapers since.

Thanks in part to a "special toy" for the potty (a mind teaser puzzle) he was able to ease out some poo.  I was so proud of him as he made his business happen.  He wanted me there for support; his poor little face was saying, "I really don't like this!" but he concentrated and waited and when that first little turd plopped out he was super excited.  "I just poofed out one single black cat!" he said.  (He likes to call his poops by other names; the next one he did was a baseball bat.) 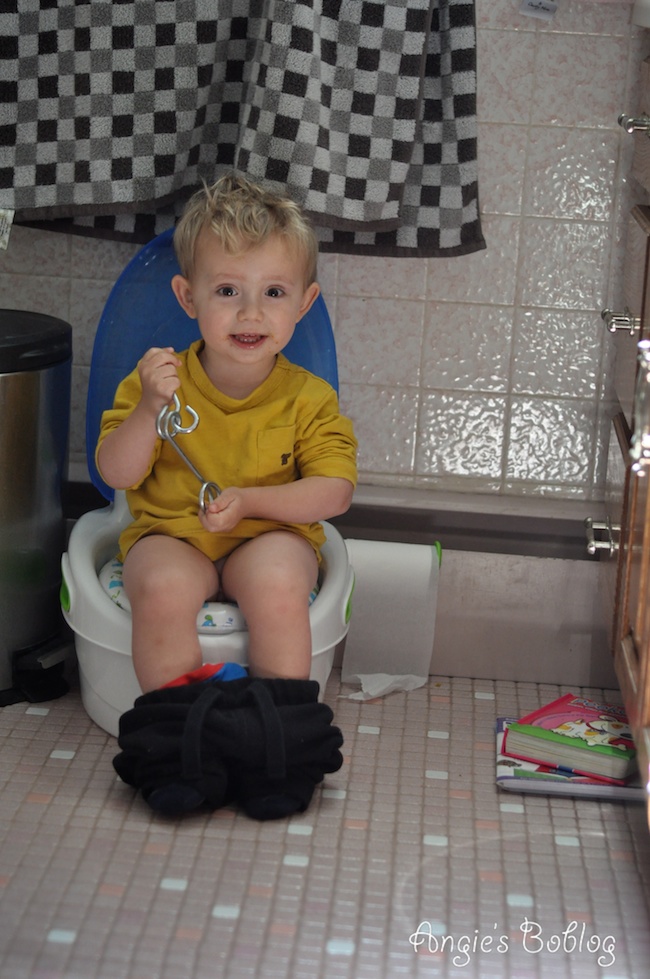 Easter.  We survived a two hour trip each way and a day away from home in New York while potty training.  Bob collected 17% more eggs than he would have been able to in a cumbersome diaper. 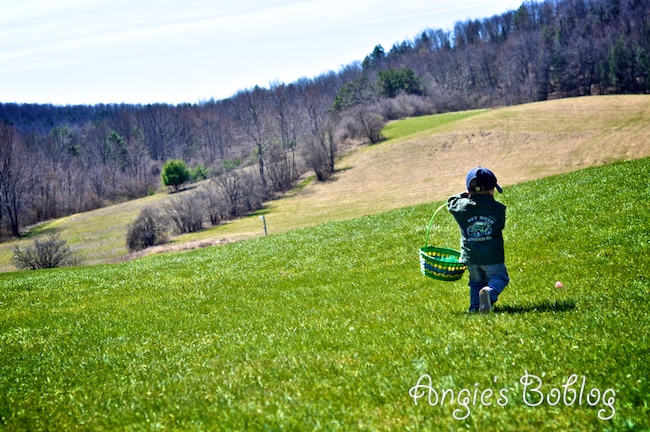 I've been sticking with the towel method in his bed and getting him up to pee before I go to sleep and maybe one other time in the night.  Sometimes he stays dry all night, sometimes he wets and I change him and his clothes and towels.  Hence many mornings he wakes up with mismatched jammies. 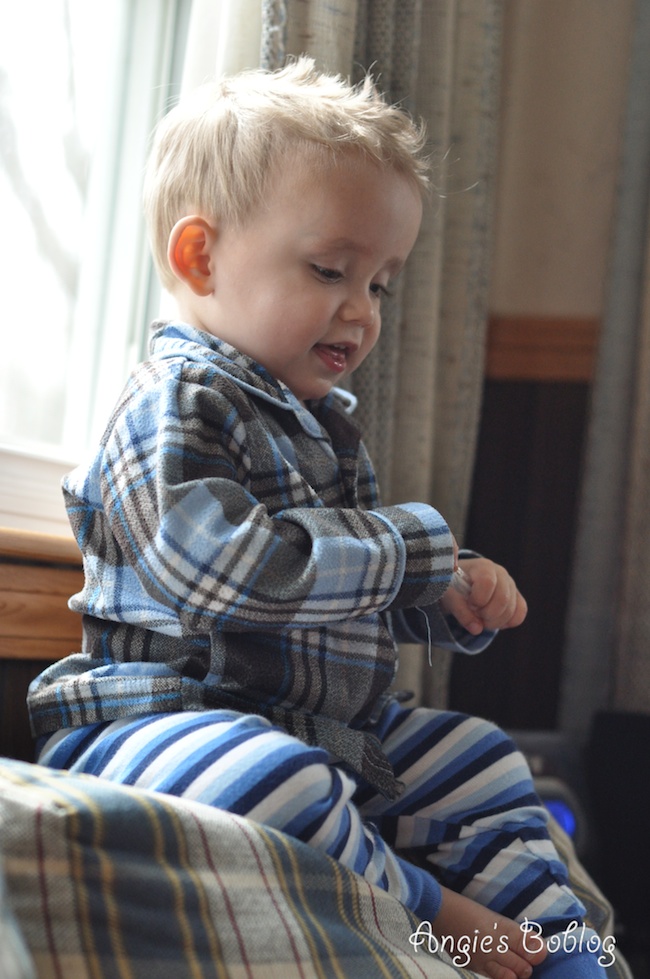 So here's what I think I learned from my first round of potty training:

It probably doesn't hurt to first introduce the potty early.  From talking with other mothers of boys, it seems like they become very accustomed to pooping in their diapers standing up.  So that makes sitting to poop a bit tricky.  Having them get used to the feel of the seat by having a little potty time every day seems like a good idea.  Especially if your kid's a regular pooper (mine's not) and you can have him sit at his usual poopin time.

Don't wait too long to dive into the full training, partly because of the above problem.  Sarah says the magic time for learning is between 2 years 3 months and 2 years 6 months; maybe she's right.  Some parents I've talked to recently who waited longer than that are having major issues now.  Bob fits in that age bracket, and he's doing swell.

It doesn't work to do potty training halfway, trying to convince him to go in the potty but keeping diapers or pull-ups on just in case.  If he has a diaper on, that's where he'll do his business.  There's a big difference between wetting a diaper and peeing your pants.

And speaking of which... peeing your pants can be very upsetting.  The icky sensation, the feeling of shame.  Never ever scold when he pees in his undies.  Bob needed some comforting the first couple of times.  Give him a hug and say, "Icky sticky!  Now we have to change!  But that's okay.  I'm so proud of you for trying to learn something new!"

A motivator may very well be necessary to make the transition from diapers to toilets a happy one.  We tried peanut m&ms for a while, but they don't stay exciting too long... and bribing with candy doesn't seem like the best idea anyway.  I suggest taking your kiddo to do something he'll really really love... and then use a marble jar or a sticker chart or something to let him earn the chance to go back.  Worked like a charm on bob.  By the end of the first round he had already accepted that he needs to use the potty... so we've already dropped the reward system.

I really wish we had never even bought the tiny kids' potty.  Why do I want to clean poop out of a tiny toilet instead of cleaning it out of diapers?  I don't.  I'm going to order one of these flip up seats for the adult toilet and make bob switch.  Owen may never get to try the training potty.

Oh, one last thing.  A few weeks ago we watched a Mr. Rogers episode about toilets (you can watch lots of episodes including this one for free at pbskids.org here).  I think Bob found it both informational and inspirational.

That's all I've got.

Except one last treat for you: four cute minutes with Bob.

Happy Easter and happy pooping!
Posted by conveyableflow at 2:45 PM