We should be in Jamaica right now, but instead I am sitting on my couch.

Our first attempt at three person family air travel was a failure.  We missed the check-in time for our 5:30am flight (by just one minute -- but that is evidently irrelevant).  It wasn't Bob's fault; it really had nothing to do with him.  I guess if it was anyone's fault it was mine...

Ben and I always debate about what time we need to leave for the airport.  He likes to leave super early and get there two hours before departure.  I like to minimize time spent waiting around in the airport and leave at the last possible minute.  Some people call it "cutting it too close" or "just plain stupid" but I just like to think of myself as a risk taker who also happens to be very talented at estimating how much time things will take.  So, before the debate ever began, I started planting seeds -- "there won't be any traffic at 4am" and "all the lines will be nice and short since our flight is so early."  When the question came up, Ben (wanting to offer a compromise from the start I think) suggested that we leave the house at 4am.  I couldn't believe he was willing to leave so late, but felt no need to argue.  I knew we'd be cutting it close, but I thought we could make it.  We didn't run into any problems getting there, but it just didn't happen as quickly as we had hoped.  I learned from the experience that it really isn't a good idea to push it, because you could end up putting a serious damper on your vacation.  Better to lose an extra hour of sleep.  Ben was very calm about the whole thing, possibly because he had the satisfaction of being right to ease his heart.  (I joke.)

We tried to fly standby at 7am, but didn't make the cut, so we decided to book the 5:30am flight tomorrow morning and try the same thing over again.  After several conversations with American Airlines personnel including Ricky Ricardo the manager we were also able to push our return date back one day without any extra charge, and both of the resorts we will be staying at were willing to accommodate our "change of plans" as well.  So we returned home, and here we've been, trying to make the most of this strange extra day.

Bobby was a trooper through the whole ordeal.  Here's the one photo I took, just as we were about to re-board the parking shuttle and leave the airport: 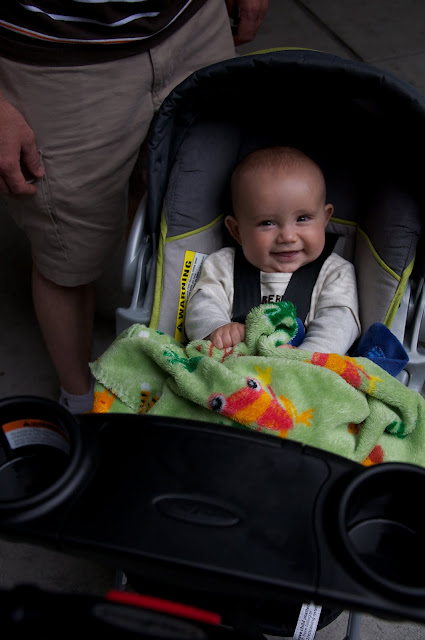 Like Ben said to me earlier, this whole day is like a really long plane ride -- just sitting around waiting to arrive at our destination.  Or maybe it's more like we are LOST and this is the alternate horribly wrong present...

But I can assure you that we will NOT screw this up again tomorrow.
Posted by conveyableflow at 5:43 PM