Traveling with baby: what we learned

Our Jamaica adventure was definitely a success.  Here's what we learned, some through doing it right, and some through doing it wrong.
1.  This is probably the biggest one:  Bring the car seat to the gate!  Way back when, before Bob was born, we purchased a "travel system" with a car seat and three-wheel jogging stroller.  The super stroller is such a smooth ride, and we thought it would be cool for, I don't know, taking on easy hikes or something, because we certainly didn't get it for its jogging capabilities.  There are so many hills in my neighborhood that if I ever do start jogging I certainly won't be pushing that wheelbarrow of bricks along with me.  Anyway, the thing is heavy and huge -- it doesn't even fit in my Jeep with the top down.  Hence, we rarely use it.  I think I'm going to take it over a few tough curbs and try to return it via the service plan I bought...  Point is, for our trip we purchased one of those minimalist frame strollers that the infant car seat clicks into.  I resisted doing this since Bob will probably graduate to a convertible car seat soon, but I am so glad we did.  It worked perfectly.  Super light and easy to fold and unfold.  No carrying baby through the airport, plus I put my carryon bags into the basket underneath, so I didn't even have to carry a thing.  No buckling and unbuckling Bob as we got on and off shuttle buses and taxis, plus his car seat is much more comfortable for him than an umbrella stroller.  We had no issues with checking the car seat and stroller at the gate -- we didn't even get any evil glares from the airline crew.  Both of our flights down to Jamaica were full, so we didn't get to use the car seat for those, but like I said, no big deal.  Our flights back both had extra seats (if there's just one seat open you can generally get people to move around for you) so we did get to take Bob in his seat for those.  Even though Bobby was great as a lap baby, it was so much more comfortable not having him in my lap, and far more comfortable for him, too.  Here he is at takeoff: 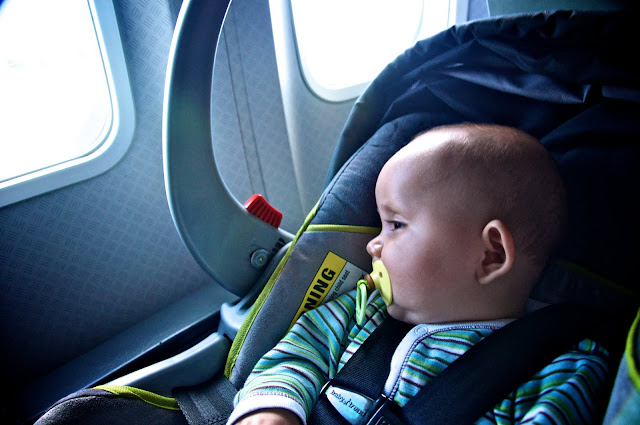 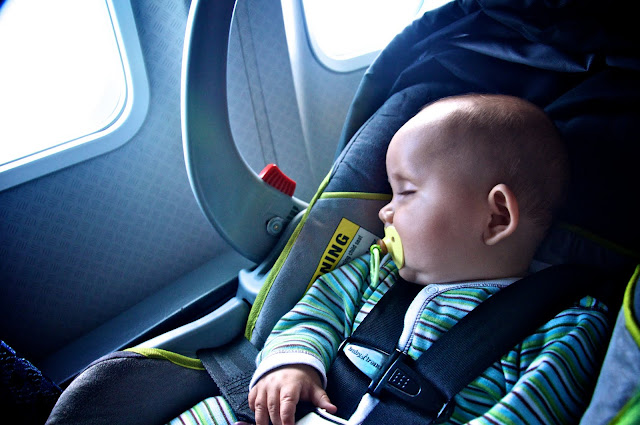 And since I didn't have a tiny person on my lap cramping my style, I was able to take some pictures out the window, which is my favorite thing about flying -- oh the sky and clouds when you see them from that perspective! 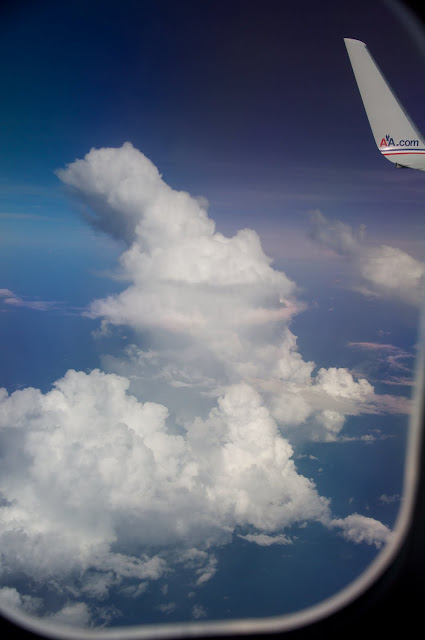 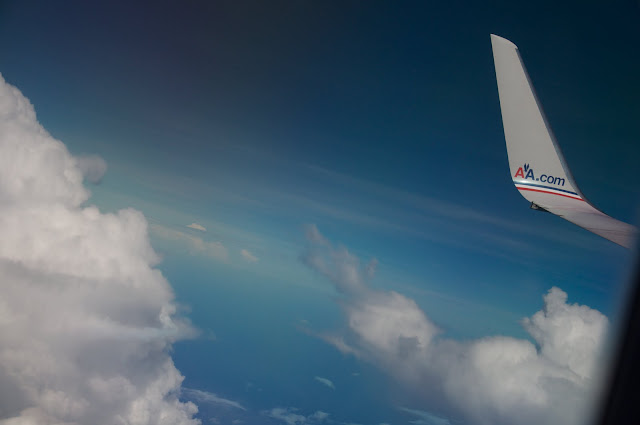 I'll also put in a little plug for American Airlines -- they were extremely accommodating with our missed flight and all.  We were impressed and blessed my how everything worked out.  Plus, I don't know, maybe all airlines do this, but no baggage fees on international flights.  We were planning to drop a couple hundred dollars on fees -- so glad we didn't have to!
Here's Bob happy as a clam in his seat after his nap: 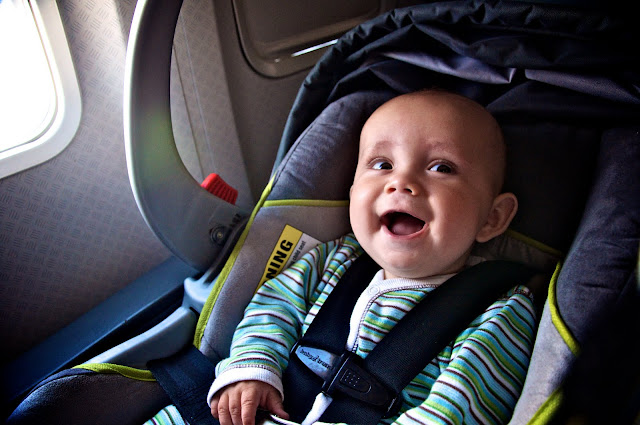 It also felt good knowing that if we were to hit any major turbulence or anything, Bubbs would be totally safe.  I've read other blogs where people say rent a car seat when you get where you're going; I beg to differ.
2.  You know what your baby uses and needs every day -- there's no need to pack twice as much "just in case."  This one's not such a big deal when you have a strong loving husband with you willing to lug all the luggage, but for our next domestic flight, when we will have to pay checked baggage fees, I'll definitely pack much lighter.
3.  About gear:  Once your baby can roll over, beach tents are pretty much pointless.  Maybe one with a zipper would have done better than the velcro ours has, but I'm pretty sure Bob wouldn't have lasted long in there, and he definitely wouldn't have fallen asleep, regardless.  A float for the water, however, is a must-have.
4.  At Beaches, we had a second floor room.  It was a bit of a pain to get Bob and his stroller up and down the stairs every time we went to and from our room.  Also, every time Bob napped in the room, Ben and I were confined to our tiny balcony (except occasionally Ben ran down to hit the water slides and grab a drink).  At Idle Awhile, we had a first floor room with a veranda.  So much better!  Easier to go in and out, and a bit more freedom while Bob's napping inside.  Plus the luxury of being able to walk straight out to the beach is lovely.  I think we'll be requesting first floor rooms on this type of vacation from now on.
5.  About breastfeeding: I never understand when people say they don't want to breastfeed because it's too much of a pain.  I'd so much rather let Bubbs suck on my boob than have to mess with all that bottle and formula nonsense.  We did take a bottle and a couple cans of formula with us just in case I wanted to drink.  I took advantage on our last morning at Beaches and Bob had his first taste of the stuff.  He drank it right up.
6.  A note on our split stay: it worked out really well.  We had fun living it up and being crazy at Beaches for the first half of our trip, and then we had a relaxing wind-down for the second half.  I thought it would be annoying to switch hotels, but it wasn't bad.  We'd definitely do it again.
So, traveling with baby turned out to be not such a big deal.  In a lot of ways, it's easier because everyone is so helpful and accommodating when you have a baby.  You get to go through the handicapped lines at security and customs.  People are nicer.  And Bobby was truly a joy to travel with.  It was super cute that he learned to wave right before our trip.  It's amazing how much a smile and a wave from a baby can brighten someone's day.
Posted by conveyableflow at 1:35 PM