On day two of our vacation Bobby woke up super early and had no interest in going back to sleep, probably wondering why we weren't getting up in the middle of the night again.  Ben and I were super tired so we let him hang out between us in bed while we tried to rest.  When I finally got sick of the incessant kicking of little feet and woke myself up a bit, I realized that Bob had over-filled his diaper with poo and smeared it all over the bed between us.  Lovely.  As you can see, he loved every minute of it. 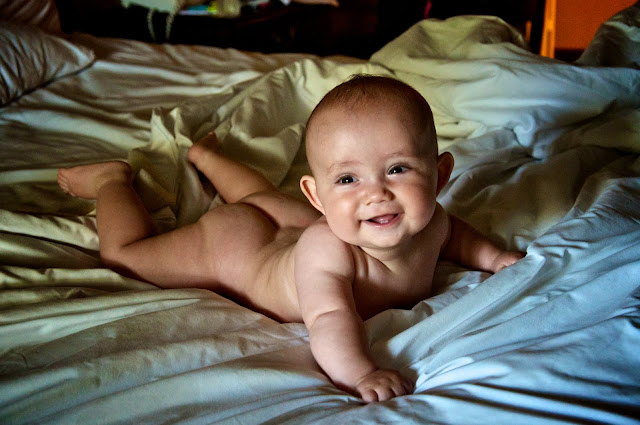 After that the bed wasn't so enticing anymore, so we got a nice early start to the day.  We were the first people at breakfast when it opened at 7:00.  I was embarrassed so we circled around for a few minutes before going up to the hostess.
Afterwards we walked over to our preferred pool and Bobby fell asleep in his stroller on the way.  There was absolutely no one around yet so we parked Bob in the shade and Ben and I had the pool to ourselves.  We threw a volleyball back and forth, trying to shoot it through the holes in a two-person inner tube.  (One of the reasons Ben and I get along so well: we both love to play.)
After a while Bobby woke up and we brought him into the pool.  This ended up being one of my favorite parts of the trip.  Bobby was so sweet and happy in the water. 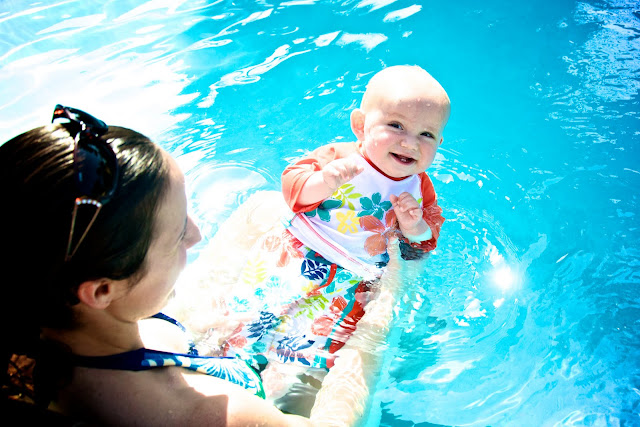 For some reason Bubbs kept sticking his tongue out while he played in the pool. 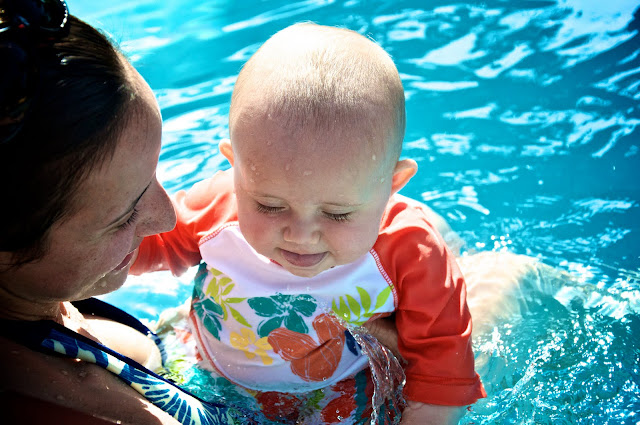 Maybe he wanted to taste the water without drinking it? 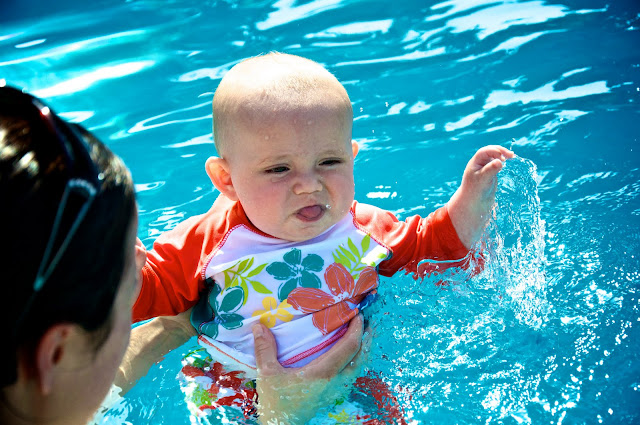 Bobby is amazing in the water.  Here he is right after a dunk.  He's such a champ -- doesn't cry no matter how much water gets in his face. 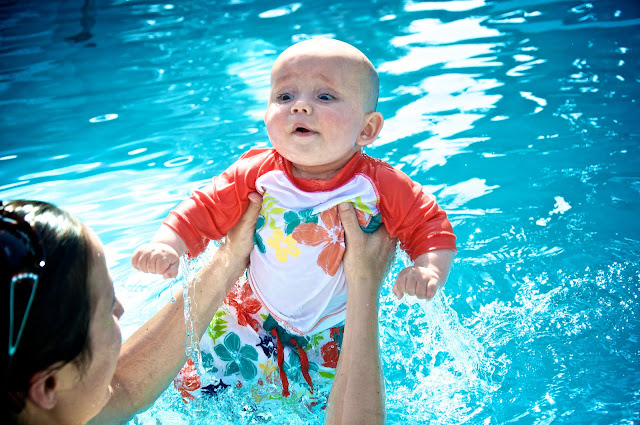 Here are some other miscellaneous photos from our stay at Beaches: 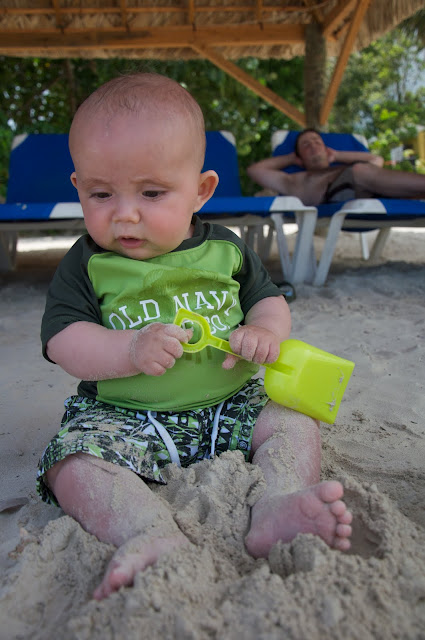 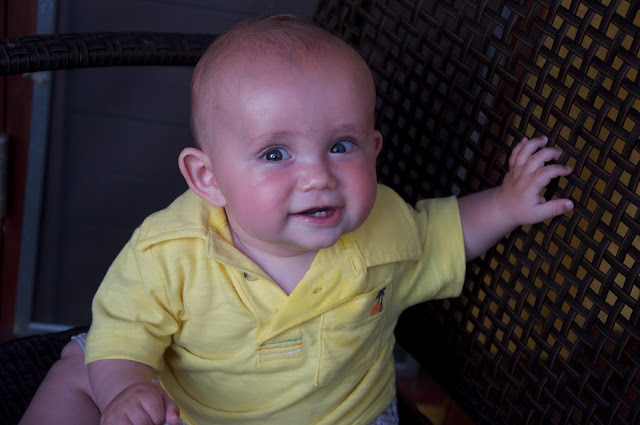 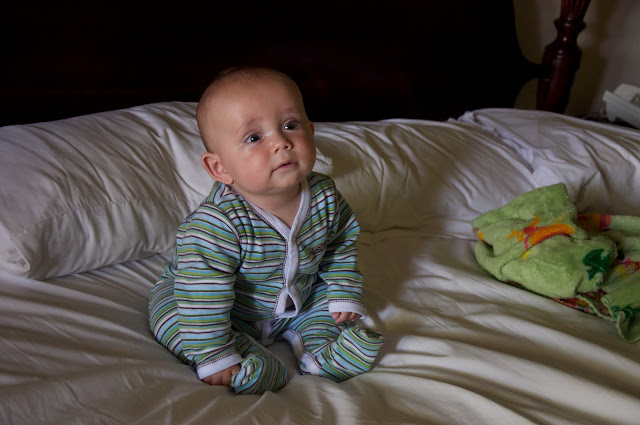 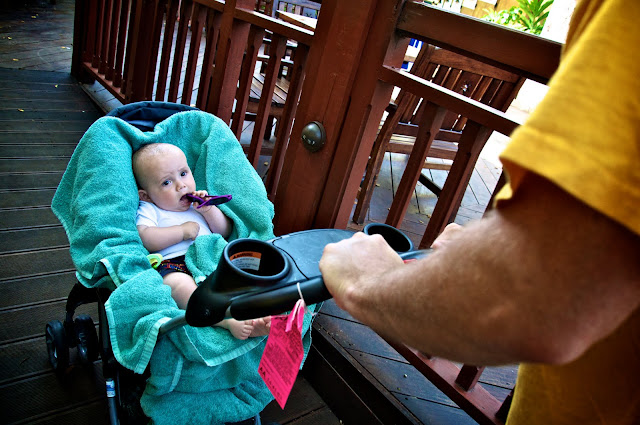 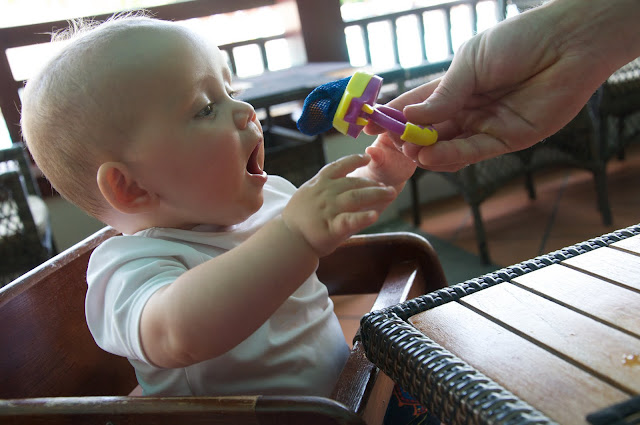 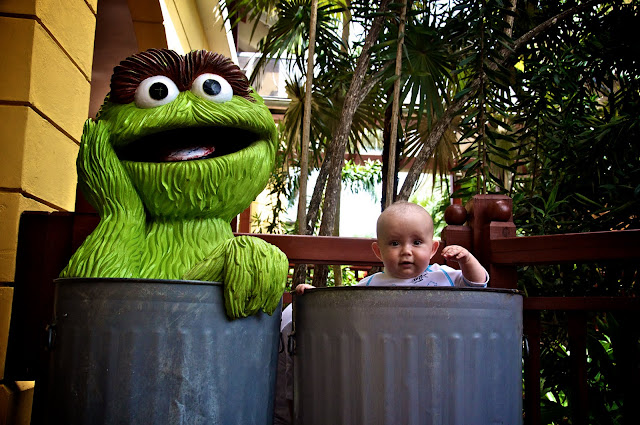 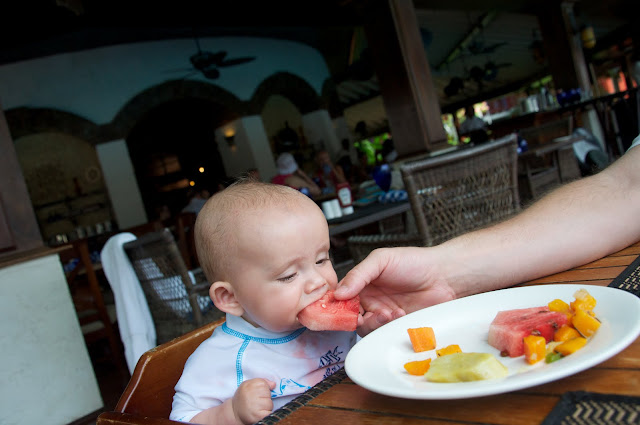 Ben and I were very excited that the resort had water slides, but we figured they'd be for kids and didn't expect a big thrill.  I packed a baby life vest and said things like, "I'm sure I could bring Bob down the slides once we get to know the lifeguards... Water slides are never a big deal..."  But oh boy were we pleasantly shocked!
The resort has childcare services available for free from 9-5.  Later on during our second day Bob fell asleep in the stroller, so we decided to check out the nursery.  It was cute and clean and air conditioned and there were three or four employees but no other kids there.  We decided to just park the baby, hoping he'd sleep for a bit, and we ran off to play.
There were two slides, one open and one enclosed.  The open slide was pretty fun, but the enclosed one was CRAZY!  The first time I went down I lost my bathing suit and nearly drowned when I got spit out at the end.  The speed was incredible; I'm pretty sure that thing wouldn't be legal in the US.  I seriously felt like I was getting some g's on a couple of the turns.  I think Ben and I went on the slides more than any of the kids at the resort. 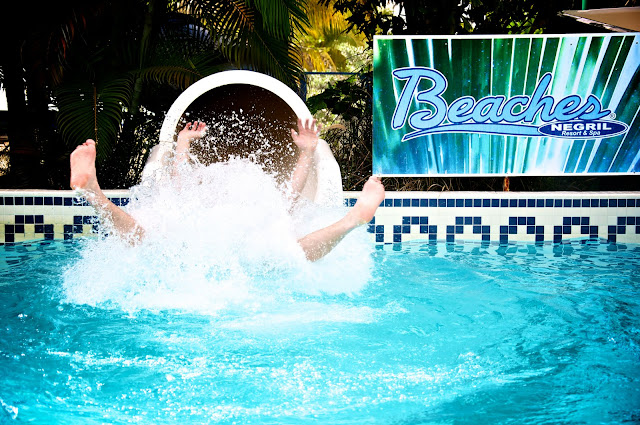 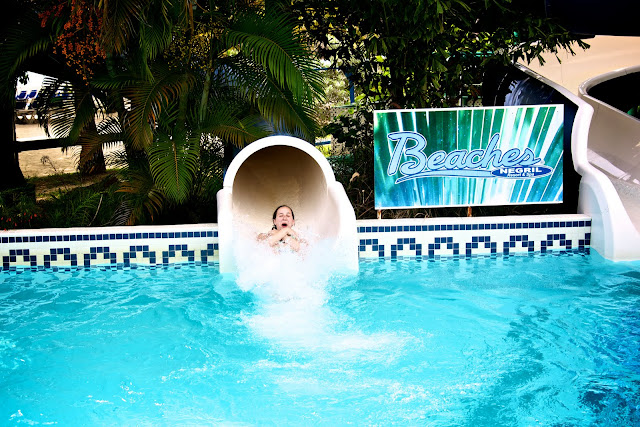 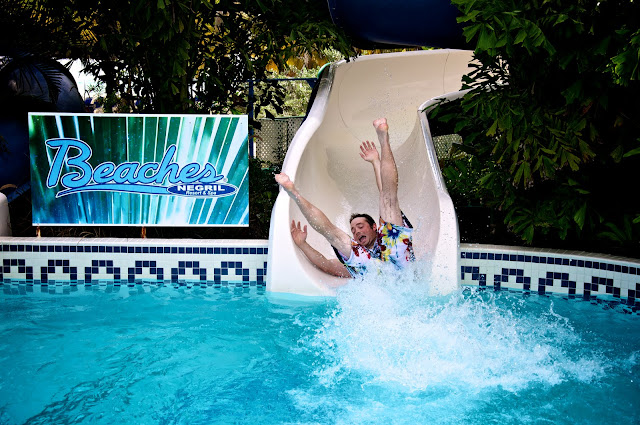 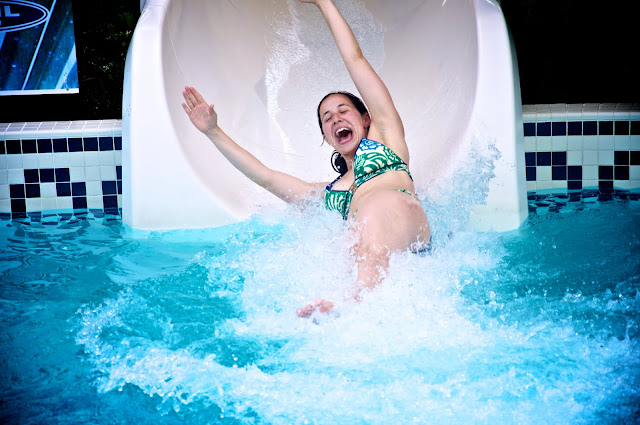 Of course, when I ran back to check on Bobby 20 minutes after I had left him, I found him screaming with all the poor nice ladies trying to comfort him.  He had woken up moments after we left and screamed the whole time.  So my sliding fun was over, but we did try to leave him at the nursery a couple more times.  It never really worked, but we were able to steal away for 30 minutes here and there.  Here are a few cute shots taken just after one of his recoveries: 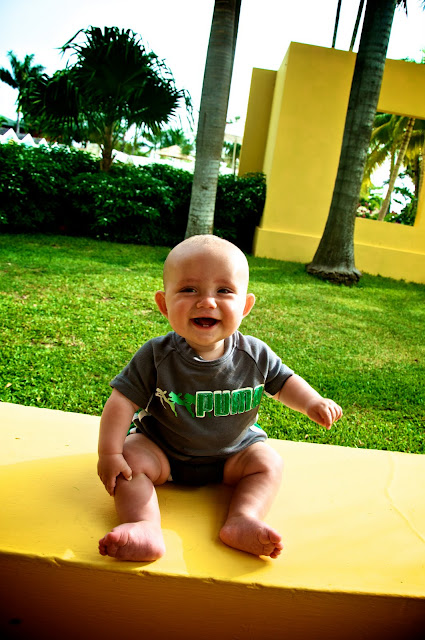 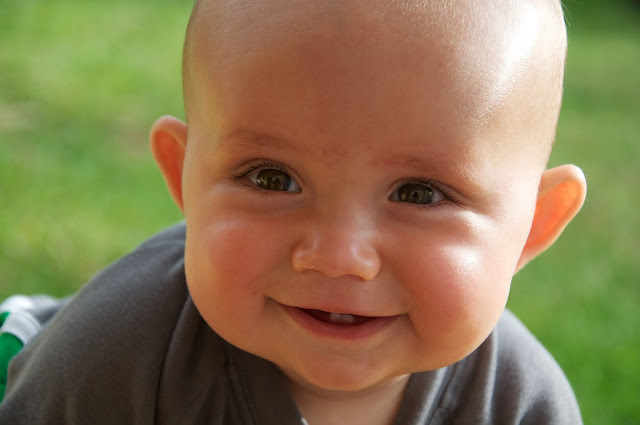 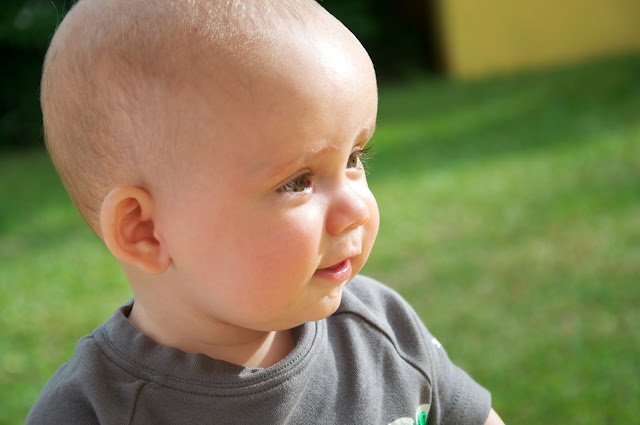 Of course I had to try to set up some award-winning shots for next year: 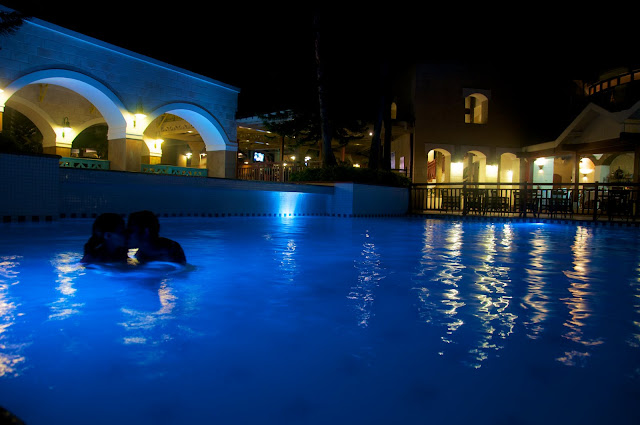 On our last day Ben and I spent some time swimming while Bob slept in a shady spot, using a t-shirt to snuggle (photos below taken by one of the resort photographers): 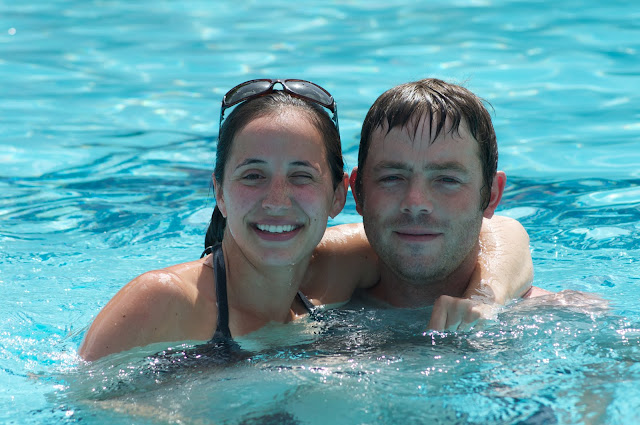 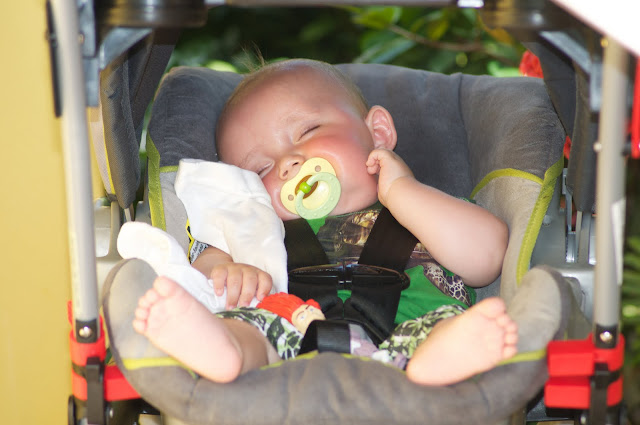 We had a really great time at Beaches Negril, and I could write so much more about it, but this post is already way too long, so...

All inclusive is super fun.  Especially when it's free.

Posted by conveyableflow at 11:27 PM