Pacifiers and crying it out

Like I've said before, Bobby is a good baby.  He goes to bed without much trouble, except he usually uses his pacifier.  Which I think may be creating a problem with sleeping through the night, since he loses it, and wakes up, and wants it, and in searching, gets hungry, and needs to eat.  Plus, I'm just not a fan of those things.  I don't care for any of the weird names that people use to refer to them -- "binkie" or "nunu" or whatever else.  We say "sucker" because at least it has half as many syllables as "pacifier" and it makes a little more sense than anything else.  Also I don't care for the idea of toddlers walking around with a big piece of plastic plugging their faces; every time I see one I want to yank it out of the kid's mouth.  Or maybe I'm just biased because I myself was a thumb sucker.  Oh, how I've tried to get Bobby to suck his thumb, but he only sucks his finger, or sometimes two, and those only casually.  I vowed I would have Bobby off the pacifier at three months because I know the longer you wait the harder it is, but yeah, that didn't happen, obviously (although he pretty much only uses it in the car seat and in his crib).

So, here we are, just past six months, and I've noticed Bobby changing and possibly getting a little worse about going to sleep by himself.  Fortunately we haven't had to deal with many sleep issues, but like I've just explained, we sort-of cheated by using the pacifier.  So last night Ben and I decided, this is it, we're going to "let him cry it out," as they say.  We need to force him to quit the sucker habit, and all the experts insist he should be sleeping through the night by now.

Just when I was getting into bed around 11:30, Bobby woke up whimpering and crying.  Moaning and whining and sounding pitiful.  It wasn't time for his normal mid-night feeding.  My heart (encouraged by my tired body) endured the pain for 45 minutes of incessant sad sounds until finally (after Ben had fallen asleep) I gave in, figuring that at this point sleep in the short-term was more important than sleep in the long-term.  I went into Bob's room in the dark and reached into his crib to feel for the sucker and when I touched the bed, everything was wet.  At first I couldn't figure out what happened -- surely he couldn't pee that much?  Then I realized, the poor boy had thrown up all over himself and all over his pajamas and sheet and blankets and sheep.  Everything was soaked with squashy milk puke.  He has never thrown up like that before.  The window was open a crack, and there was my baby, sick and wet and cold, crying.  And I had been ignoring him for almost an hour.  I felt like the worst mother in the world pretty much.

He threw up twice more during the night.  The third time it was all over me instead of all over his crib.

At least I didn't have to change the bedding again.

How can I make him "cry it out" or suffer pacifier withdrawal after all that?  I don't think I'll be very strong tonight. 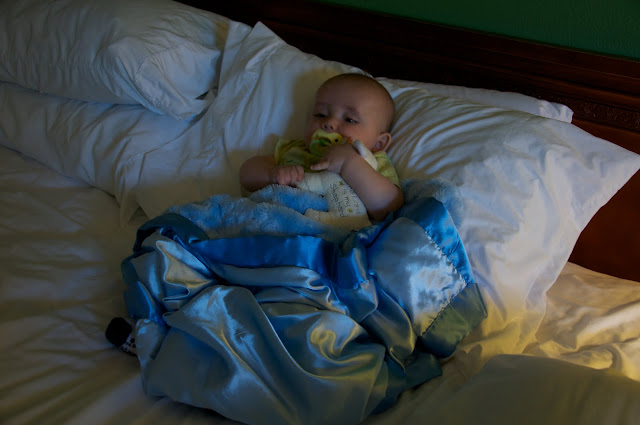 Posted by conveyableflow at 6:53 PM