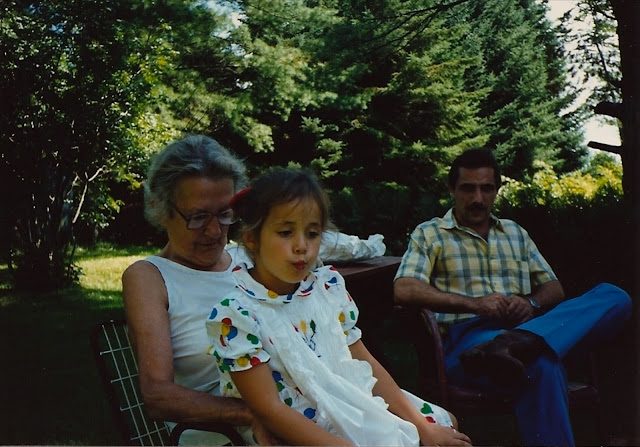 me and Gram, way back in the day
Growing up, I spent almost every New Year's Eve at my Gram's (that would be my mom's mom's mom).  I don't recall which year we started having these little "parties," but I do remember the year it became a firm tradition.  I was in fourth grade.  About four months prior, I had started playing the trombone.  Songs I had under my belt included Hot Cross Buns and Jolly Old St. Nicholas.

I had my trombone with me this New Years of course; the thing wasn't cheap and I was obligated (and excited at this point in life) to practice daily.  Gram and Pop loved my trombone playing.  They were probably the only ones who did other than Mr. Ellis my band teacher who thought I showed great potential.

So that's what we did.  Note by note we went through the song -- I played and Gram moved her hand up or down until I had the right pitch.  And once we had all the right notes, we went through with her pointing the rhythm until I had the gist of the song.  I've never heard Gram sing, but she must be really bad if she thought this was easier than humming the tune for me.  At some points we were very serious trying to accomplish our goal, and at others we were laughing so hard we couldn't breathe because it was just so ridiculous.

Before midnight I had it down, and at the strike of twelve we went out on the front porch and I played for the (fortunately distant) neighbors.  Then we called all the relatives in succession and I played for them.  I imagine now most of them thinking, "What the HECK was THAT?!" but at the time they seemed very impressed.  Gram was so proud of me.  Pop, too.

So from then on that's what we did every year, in addition to our cut-up funny papers for confetti, Sprite in fancy cups for champagne, sliced Hickory Farms meat and cheese products for hors d'oeuvres.

In years to follow, after Pop died, my little brother James and our cousins Nate and Erica joined us for the celebration.  In a lot of ways, New Years was more fun than Christmas!

This year, like last, Ben and I are home alone with our sweet little sleeping angel.  Unlike last year, I think we'll actually make it to midnight, so maybe we'll feel slightly less pathetic.  Also to help with that, we broke out our Guitar Hero rock band for the Wii.  (Our band is Two Hand Tap That; I'm the drummer.)  We're rockin in the new year... hope you are too! 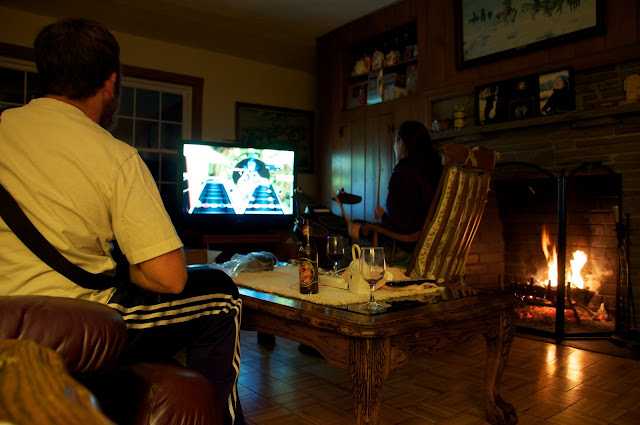 Posted by conveyableflow at 12:01 AM

Email ThisBlogThis!Share to TwitterShare to FacebookShare to Pinterest
Labels: holidays, looking back